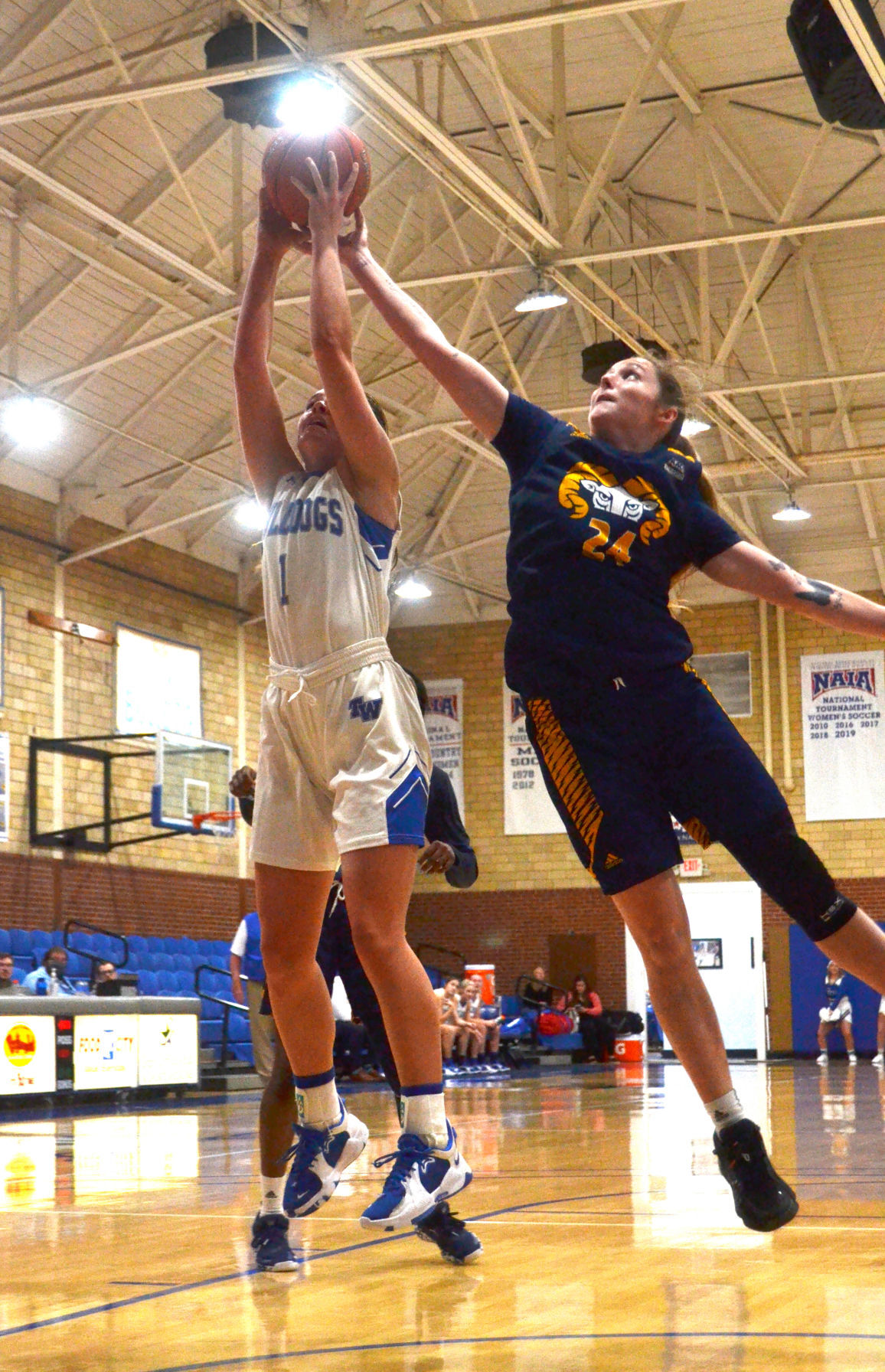 Tennessee Wesleyan’s Anna Crowder (1) battles for an offensive rebound against Columbia International on Saturday at James L. Robb Gymnasium. The freshman Crowder, a former Meigs County standout, tied for the Lady Bulldogs’ team high with 17 points in their 78-76 win. 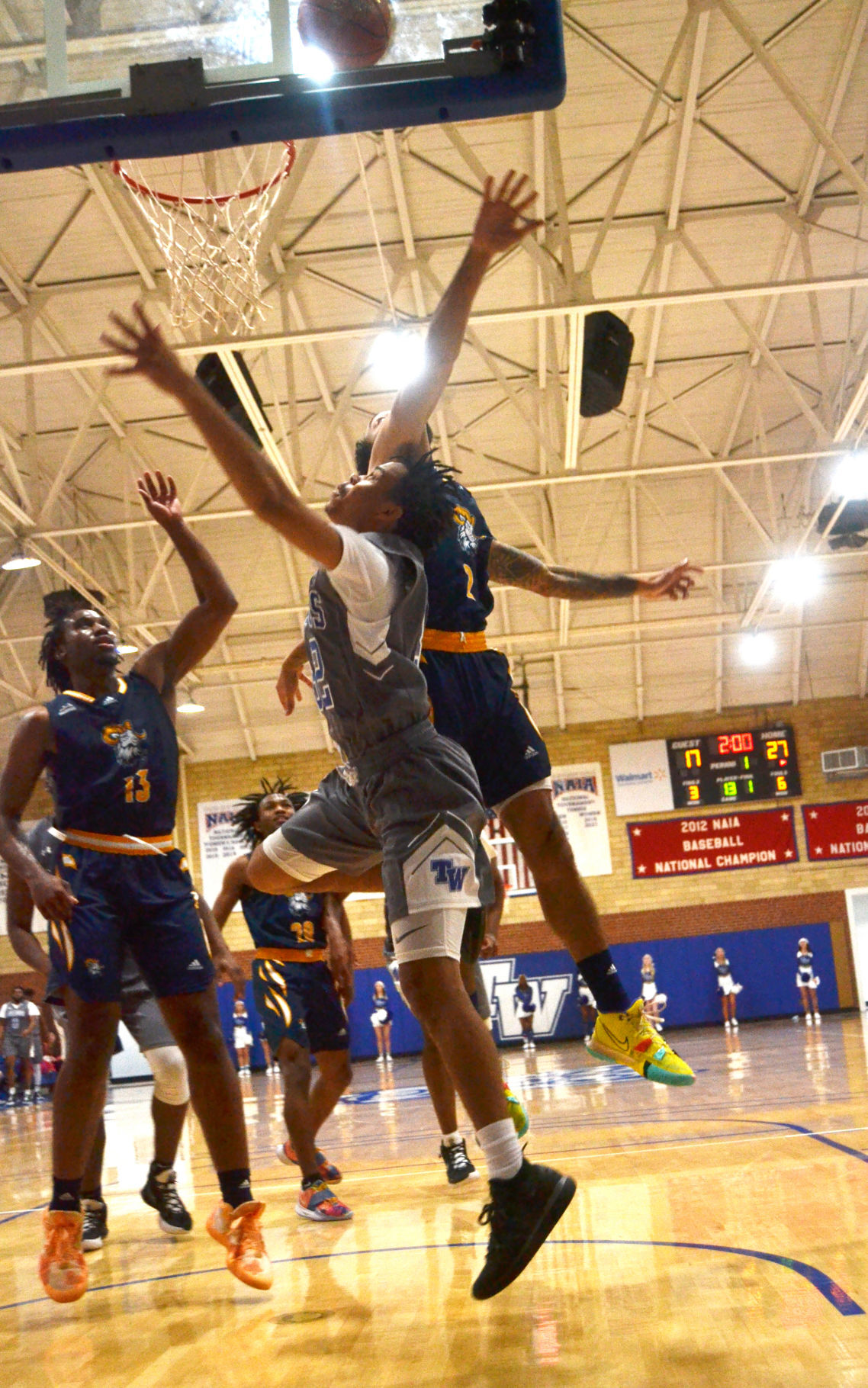 Tennessee Wesleyan’s Ray Tyler follows through and sees his layup hit the glass on the way into the basket against Columbia International on Saturday at James L. Robb Gymnasium. Tyler led the Bulldogs with 20 points off the bench in their 62-61 win.

Tennessee Wesleyan’s Anna Crowder (1) battles for an offensive rebound against Columbia International on Saturday at James L. Robb Gymnasium. The freshman Crowder, a former Meigs County standout, tied for the Lady Bulldogs’ team high with 17 points in their 78-76 win.

Tennessee Wesleyan’s Ray Tyler follows through and sees his layup hit the glass on the way into the basket against Columbia International on Saturday at James L. Robb Gymnasium. Tyler led the Bulldogs with 20 points off the bench in their 62-61 win.

Jacelyn Stone’s two free throws had just evened Tennessee Wesleyan up with Columbia International with 11 seconds left, when coach Jeff Rice went against conventional wisdom and instructed the Lady Bulldogs to foul in a tied game.

It sure paid off.

CIU’s Teneea Heston made just one of the two ensuing go-ahead free throws, giving Stone plenty of time to dribble down the court, then find a trailing Madison McClurg with a perfect bounce pass. McClurg made the layup with 3.1 seconds left to lift TWU ahead, then stole the Rams’ inbound pass and made one of two free throws, and the Lady Bulldogs rallied to a 78-76 win Saturday in their final home game of 2021 at James L. Robb Gymnasium.

“We chose to foul them in a tied game because I didn’t want them to beat us,” said Rice, who moved to 301 career wins as head coach. “I didn’t want them to have the last shot. I wanted in No. 4’s (Stone’s) hands, to be honest with you. Her going and making a good decision, and what a good cut by McClurg over there for a wide-open layup when it was on the line.”

McClurg finished with a double-double of 17 points and 12 rebounds, and Anna Crowder also scored 17 to share the Lady Bulldogs’ team high. Stone ended up with 14 points, as did Cambree Mayo, and Jordan Wright added 12 points.

CIU (3-6, 3-4) was coming off a 10-point win over a Milligan team that was previously unbeaten in AAC play.

“They’re starting to play really well, beat an undefeated Milligan team by 10 the other night,” Rice said. “And I thought we came out ready to play. We did a really good job the first quarter and part of the second quarter, and then we just got timid and we wouldn’t attack the rim, we wouldn’t attack the paint, and we allowed them to get back in the game and keep it close.”

CIU ended the third quarter ahead 57-54, part of a second half that featured 16 lead changes and six ties. CIU was ahead 73-69 with 1:37 left, but two Crowder layups and Stone’s two free throws drew the Lady Bulldogs even at 75-75 with 11 seconds left, just where it wanted to be.

“We didn’t play particularly well in the second half, but we stayed right there with them and found a way to win,” Rice said. “That’s the mark of a good team and good players.”

BULLDOGS 62, RAMS 61: TWU’s men found a way to prolong their winning streak even with Ty Patterson struggling to score.

Freshman guard Ray Tyler erupted for a career high 20 points off the bench, including the winning free throw with 2.9 seconds left, and the Bulldogs (10-1, 7-0) rallied to win their seventh straight game and stay undefeated in AAC play despite Patterson being held to four points.

“We got a lot of response from our bench, and that’s what the game is about,” said Bulldogs coach Ray Stone. “Any time you can win a game with your leading scorer having only four points, then that’s a good night. And I told the guys that nobody said every game is going to be pretty, but learn from our mistakes and learn from these tight games and just hope that we can come out on top, and we did tonight.”

CIU nudged ahead 54-50 with 6:32 left, before an Elisha Mayberry jumper ignited a 10-0 go-ahead Bulldogs run. Tyler followed with a layup and also capped the spurt with a jump shot that left TWU ahead 60-54 with 1:39 left.

The Rams had one more run left, tying at 61-61 with 17 seconds remaining, but Tyler responded by drawing a foul to the hoop. He made the first of two ensuing free throws, which ended up being all TWU needed.

“But he was just in a zone tonight, and we needed it,” Stone said. “We needed all 20 points, and I said plenty of times to the guys, it’s all about trusting yourself. I believe in each and every one of them, and just be ready to answer the bell when it’s your calling. And he was playing well for us tonight, and a great game for Ray Tyler.”

Both TWU basketball teams travel to Reinhardt on Wednesday for their final AAC games of the 2021 half of the season.