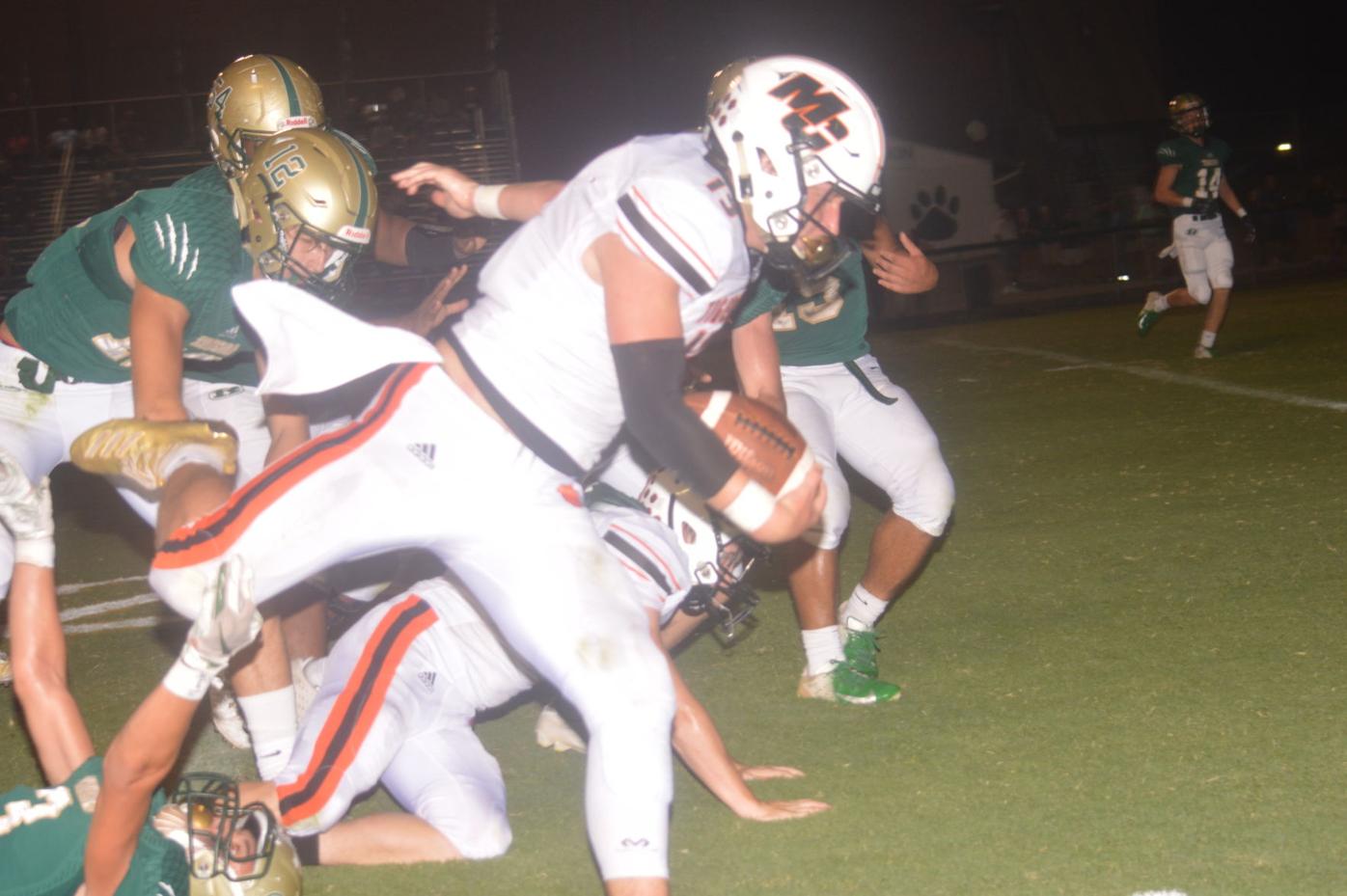 Meigs County's Aaron Swafford led the Tigers to a 42-7 win over Rockwood on Friday. Swafford scored a running touchdown and also returned an interception for a touchdown. 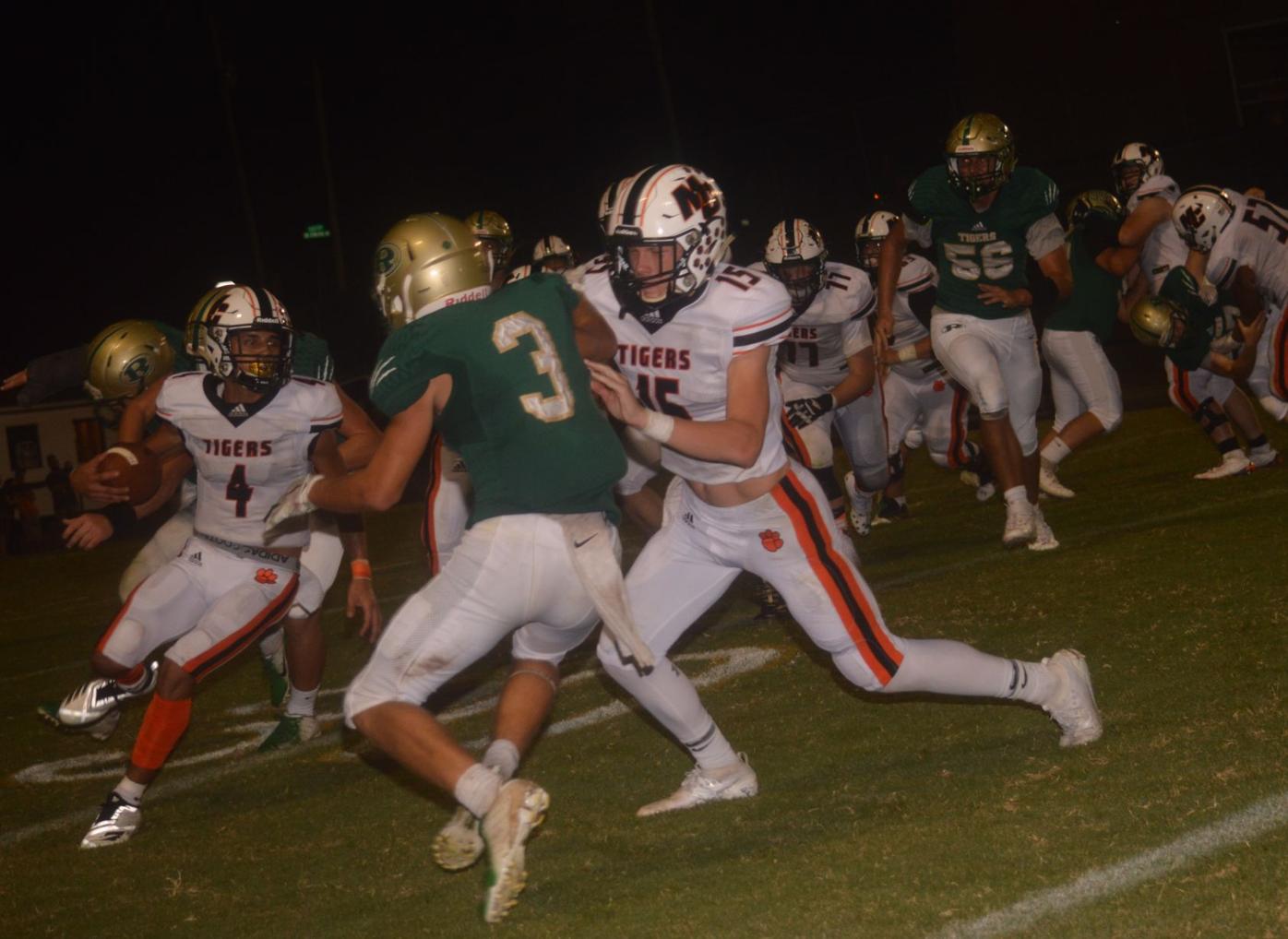 Meigs County's Gabriel Maldonado looks for running room off a block by Cameron Huckabey during Friday's 42-7 win at Rockwood.

Meigs County's Aaron Swafford led the Tigers to a 42-7 win over Rockwood on Friday. Swafford scored a running touchdown and also returned an interception for a touchdown.

Meigs County's Gabriel Maldonado looks for running room off a block by Cameron Huckabey during Friday's 42-7 win at Rockwood.

ROCKWOOD – Meigs County won Friday’s big cat fight with a 42-7 victory over homestanding Rockwood in an important District 2-2A contest.

The game got off to a rough start for the Meigs Tigers as Rockwood intercepted a ball off a ricochet near the end of the opening period and then drove the ball in for the score. Rockwood, also nicknamed the Tigers, led 7-0 with 1:26 left in the first quarter.

After that, however, it was all Meigs as it ripped off 42 straight points to come away with their second district win.

Meigs answered Rockwood’s score with a drive when quarterback Aaron Swafford fumbled the ball and receiver Cameron Huckabey pounced on the ball in the end zone. Swafford’s extra point was good to tie the game at 7-7 with 11:46 left in the second quarter.

Meigs forced a punt and then took the lead on a 31-yard touchdown run by Will Meadows. The extra point attempt failed, leaving the score 13-7.

The Tigers’ defense forced another punt and then Swafford outran Rockwood on a 57-yard touchdown run. Swafford also ran in the two-point conversion to make it 21-7, Meigs, with 3:15 left in the half.

Swafford then intercepted a Rockwood pass, started toward the far sideline, but cut back and found a seam near the Meigs sideline. A couple of big blocks, especially one by Montana Lowe, cleared the way for Swafford to sail into the end zone and give Meigs a 27-7 halftime lead.

“If that play isn’t a Sportscenter Top 10 plays, I don’t know what is,” a Meigs player yelled on the sideline.

The teams exchanged several punts in the third quarter before Meigs found the end zone again, this time on a four-yard run by Meadows to put Meigs ahead 35-7. Swafford had several sizable runs on the drive as well.

The final nail in Rockwood’s coffin came on a 31-yard touchdown rumble by Jackson Fritts to make it 42-7.

Meigs County (5-0, 2-0) will now turn its attention to neighboring rival McMinn Central (2-3, 0-2) as the Tigers host the Chargers for Homecoming. Central lost to Red Bank, one of the better 3A teams in the state, 62-0 on Friday.