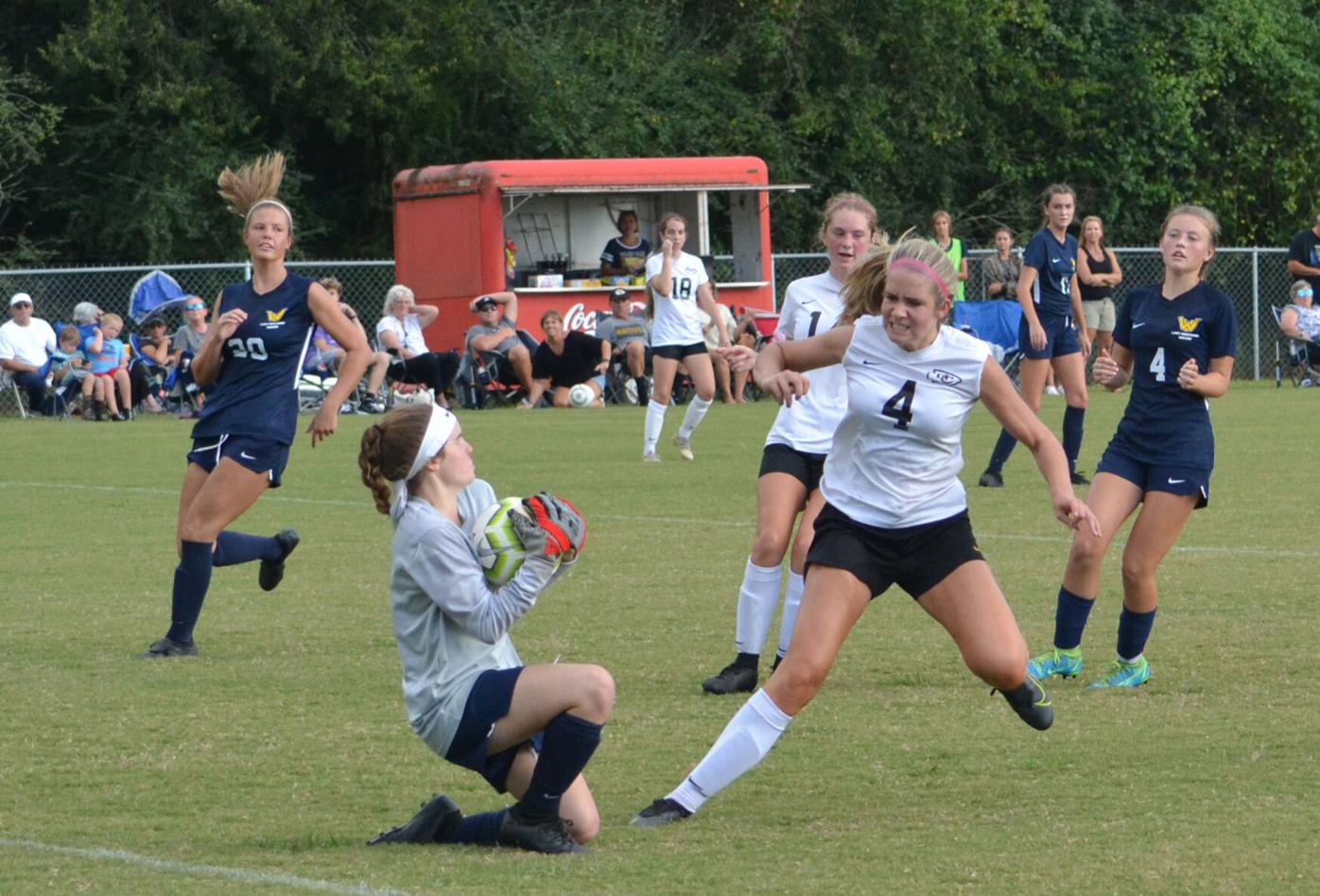 A ball ends up in the Walker Valley goalkeeper’s grip just before McMinn County’s Kayleigh Ridley (4) can reach it for an attempt at a goal during the Lady Cherokees’ 2-1 win Thursday at Walker Valley High School. 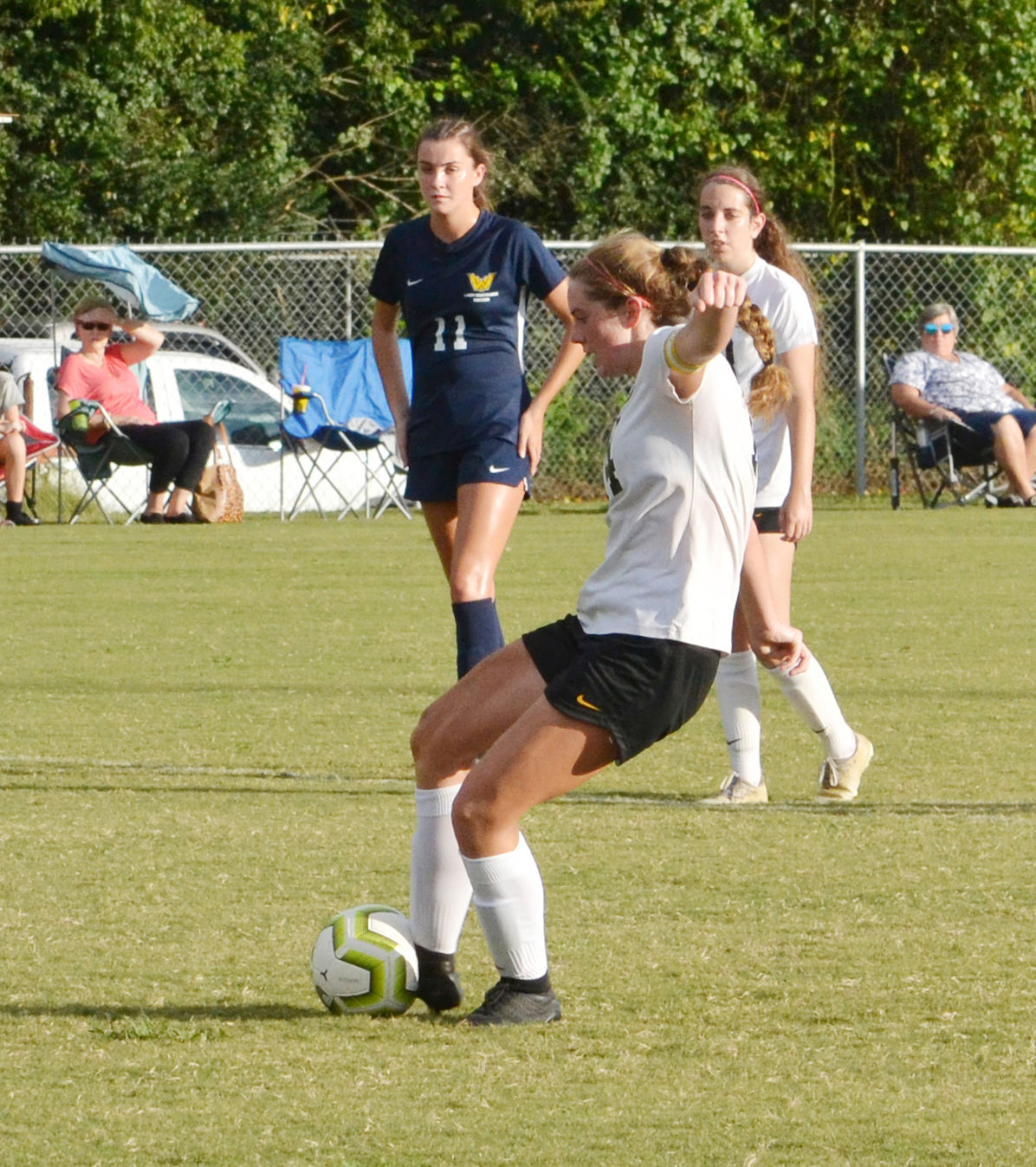 A ball ends up in the Walker Valley goalkeeper’s grip just before McMinn County’s Kayleigh Ridley (4) can reach it for an attempt at a goal during the Lady Cherokees’ 2-1 win Thursday at Walker Valley High School.

CHARLESTON — Things were looking too easy for the Lady Cherokees lately. Perhaps they needed a game just like this.

Allison Hansford got hit by a Walker Valley defender’s arm in the penalty box, then sent in the ensuing penalty kick for the go-ahead goal with 3:51 left in the game, and McMinn County escaped with a 2-1 win in a physical and often contentious clash against the Lady Mustangs on Thursday at Walker Valley High School.

“It feels like we always have one of these games every year where we have to really dig deep and face some adversity with in course of the game and figure it out as we go,” said McMinn coach Jordan Jacob. “And Walker Valley definitely gave us that today right until the last few minutes. It’s good for us to experience that in games that mean something, especially after some of our recent games where they haven’t had to face that adversity. So I think that was good for us today.”

The Lady Cherokees (8-2, 5-0 District 5-AAA) came into Thursday on a six-game winning streak in which they outscored their opponents a combined 37-2, a stretch that included state-level powerhouses East Hamilton and Maryville. Moreover, McMinn has not lost to a District 5-AAA opponent since the 2017 district tournament.

But both of those streaks were in serious jeopardy for much of Thursday. Walker Valley (5-3, 2-1) put three shots on goal in the first 10 minutes in counterattack situations, all while packing its defensive third and thwarting many Lady Tribe attempts to get an attack going.

“They had girls back there who weren’t afraid to go win the ball, challenge in the air, challenge for 50-50 balls,” Jacob said. “And that makes a huge difference now. And ultimately they kept the ball out of their defensive end, or at least from dangerous areas, so kudos to them.”

The Lady Mustangs paid off that defensive effort with a goal from Elizabeth Lannom at 12:50 before halftime, bumping in a loose ball following a McMinn free kick that barely got out of the Lady Cherokees’ own 18-yard box.

With McMinn down 1-0, Hansford answered by arcing a shot from the left edge of the 18-yard box over the goalkeeper’s hands into the goal to equalize at 8:53 before the break.

But Walker Valley’s defense continued to hassle and frustrate the Lady Cherokees after halftime. The Lady Mustangs even had a threat at another go-ahead goal five minutes into the second half, a point-black opportunity that sailed high.

The game turned into a flurry of fouls called on both sides between the 10th and 20th minutes of the second half. Each side had two players issued yellow cards as play got increasingly chippy.

During that segment of the game, McMinn had several free kick opportunities in the attacking third that did not materialize into a goal.

“We just couldn’t get in the flow of the game,” Jacob said. “It was somewhat of a physical game, and so I think the constant stops and starts hurt us there a little bit. It’s something that we have to learn from and figure out, OK, if this happens again, how are we going to improve and make sure that doesn’t affect our game.”

Walker Valley had another look at a potential go-ahead goal with about 14 minutes left in the game that went wide of the frame, and McMinn had a free kick from near the Lady Mustangs’ goal line to two crashing Lady Cherokee attackers, but the header went wide with about seven minutes remaining.

Only after Hansford’s winning penalty kick did the Lady Cherokees take control, and they prevented the Lady Mustangs from manufacturing any serious threat at an equalizer.

McMinn finished with a 23-14 overall shot advantage but only an 8-7 edge on shots on goal. The Lady Tribe kicked five corners to Walker Valley’s one. The Lady Cherokees’ goalkeeper Bella Hooper finished with six saves.

In the end, the Lady Cherokees extended their winning streak against District 5-AAA opponents to 25 games and clinched the top seed and the home-field advantage that comes with it for the district tournament in October.

“That’s what we set out to do in hopes of the postseason tournaments, and we’ve had success in the past, and that’s where the road leads to further games,” Jacob said. “That’s what we wanted to do, and we got it.”

McMinn has three non-district games left on its regular-season schedule. The Lady Cherokees are back in action 7 p.m. Tuesday at home against Knoxville Catholic for the first of those.