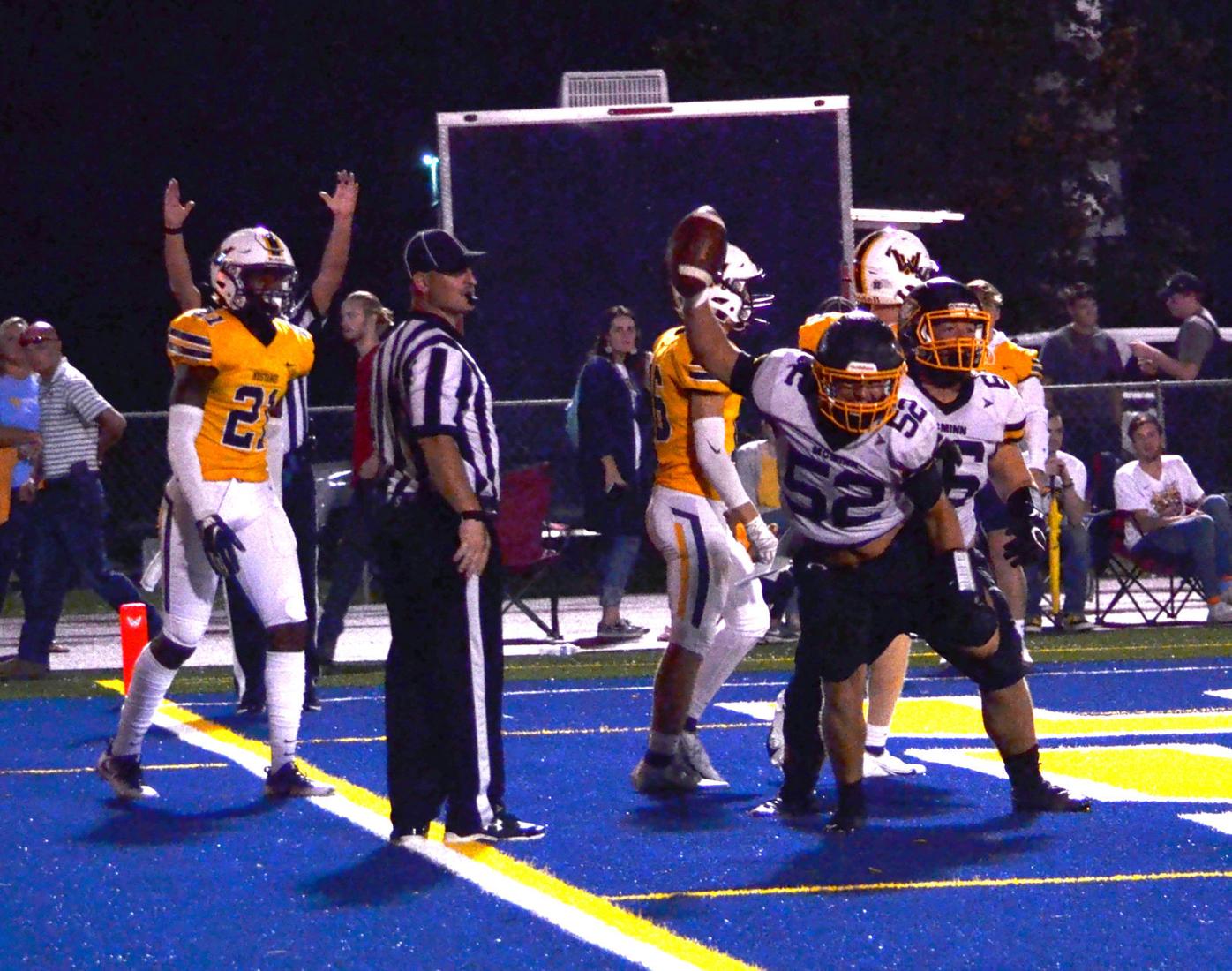 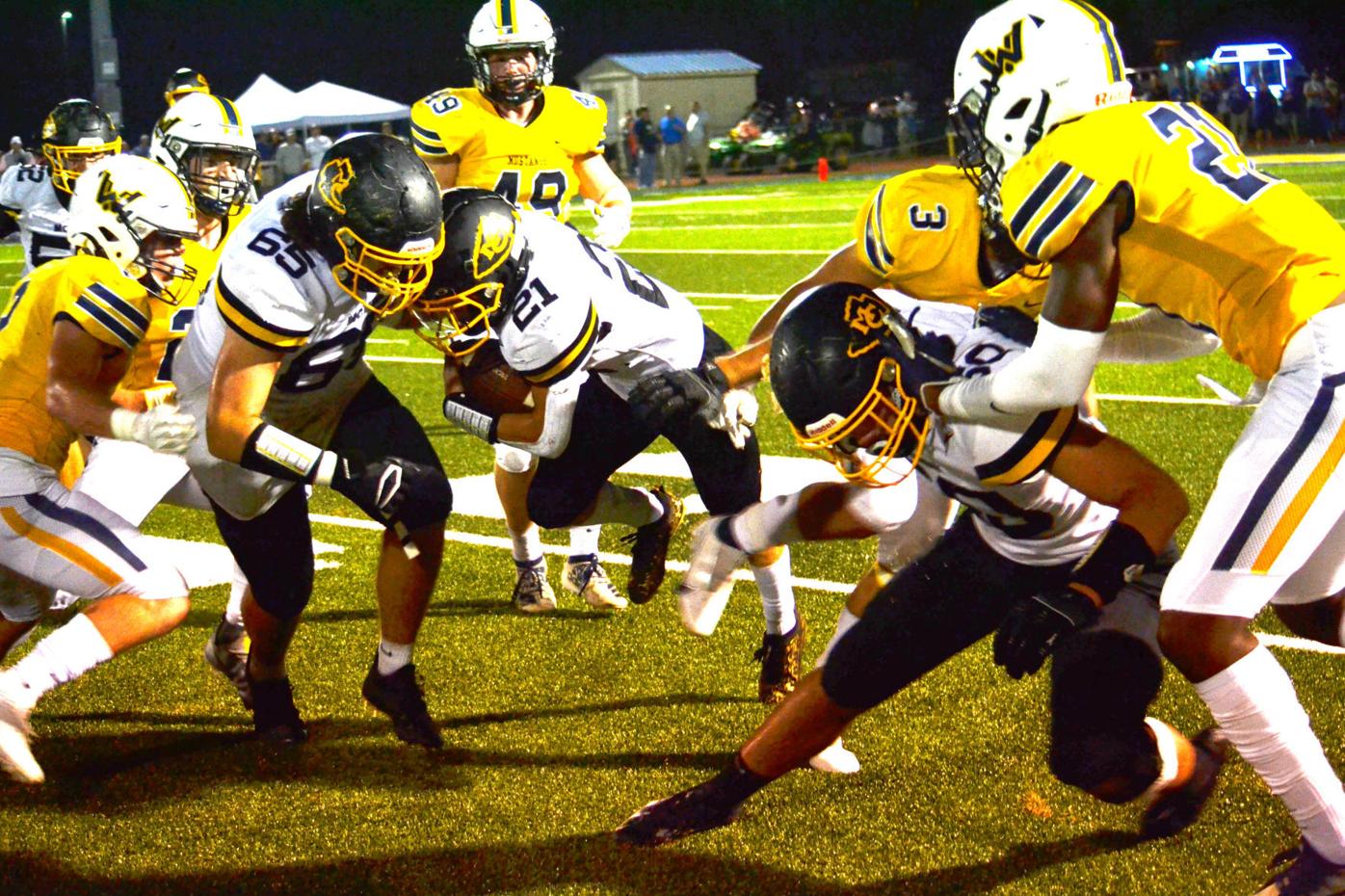 McMinn County running back Cody Thompson (21) runs the ball between the blocks of Luke Chouinard (65) and Conner Bates (50) during the Cherokees’ 42-21 win Friday at Walker Valley High School. Thompson ran for 138 yards and two touchdowns on 22 carries. 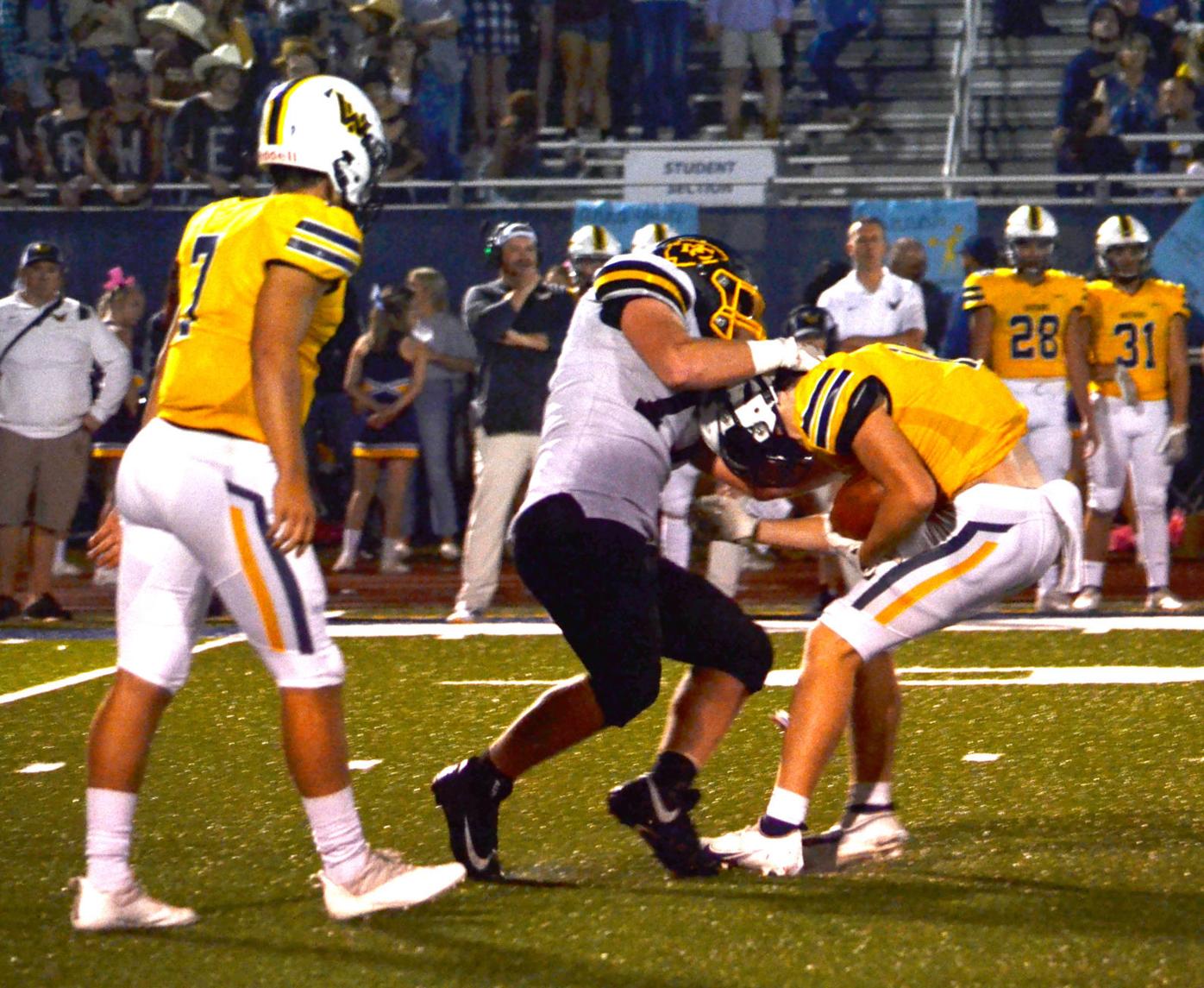 McMinn County’s Jaryd Gable makes a tackle for loss during the Cherokees’ 42-21 win Friday at Walker Valley High School. Gable also had a blocked punt for a safety in the victory.

McMinn County running back Cody Thompson (21) runs the ball between the blocks of Luke Chouinard (65) and Conner Bates (50) during the Cherokees’ 42-21 win Friday at Walker Valley High School. Thompson ran for 138 yards and two touchdowns on 22 carries.

McMinn County’s Jaryd Gable makes a tackle for loss during the Cherokees’ 42-21 win Friday at Walker Valley High School. Gable also had a blocked punt for a safety in the victory.

CHARLESTON — Coach Bo Cagle made one thing clear to his squad at halftime: the only team that was beating McMinn County was McMinn County.

Four turnovers marred the first half for the Cherokees, but they didn’t commit any more in the second half. Instead they rang up 28 consecutive points against Walker Valley, turning a 14-14 halftime deadlock into a 42-21 takedown of the Mustangs on Friday at Walker Valley High School.

“We are shooting ourselves on the foot and we’ve got to clean it up, and if we’ll do that we’ll give ourselves a great opportunity to win,” Cagle said. “And obviously we came out and cleaned up those turnovers in the second half and played better football.”

With the victory, McMinn (5-3, 2-1 Region 4-5A) put itself on the inside track toward a runner-up finish in Region 4-5A and the home playoff opener that comes with it. The Tribe still needs to defeat Ooltewah in two weeks to ensure that second-place finish.

But before that is a challenging non-region contest 7:30 p.m. Friday, Oct. 22, back home against Loudon, who is undefeated at 8-0 and ranked No. 2 in Class 3A in The Associated Press state poll.

“You don’t want to look ahead. We’ve got to get to that game (against Ooltewah),” Cagle said. “We’ve got to play well. We’ve been getting better. I feel like we’ve been improving each week.”

The Cherokees also ran their all-time record against the Mustangs to 13-0 with Friday’s victory. However, McMinn’s bid to stay perfect against Walker Valley (4-4, 1-2) got off to a sloppy start with two lost fumbles in its own territory in the first quarter alone.

But the Tribe’s defense stopped both ensuing Mustang possessions, ending the first quarter scoreless. That gave McMinn an opportunity to put together its first scoring drive of nine plays and 68 yards, which Jayden Miller finished off with a 16-yard quarterback keeper for the touchdown at 8:53 left in the second quarter.

Caden Hester then intercepted Walker Valley quarterback Ryan Lay and returned it back to the Mustangs’ 14-yard line. Three plays later, Cody Thompson ran in the first of his two touchdowns from 20 yards out for a 14-0 McMinn lead.

But the Mustangs answered in 13 plays covering 80 yards, with Lay completing passes of 35 and 23 yards and ending the drive with a one-yard touchdown to cut McMinn’s lead to 14-7 with 2:37 before halftime.

The turnover issues then struck for McMinn again with a muffed kickoff that Walker Valley recovered at the Cherokees’ 25. Lay then lobbed a pass to a wide-open Aiden Gibson for the tying touchdown, making it 14 Mustang points in 12 seconds.

“We gave them those short fields, and I still feel like we had an opportunity to make stops and didn’t do it,” Cagle said. “And it’s fundamental football. It wasn’t scheme, it was us doing things right.”

McMinn’s next possession ended in Miller getting intercepted, giving Walker Valley a chance to take the lead starting at the Tribe 48, but the Cherokees’ defense got the three-and-out heading into halftime.

Landon Feggins ended the Mustangs’ opening possession of the second half with an interception on the right sideline that he returned to the 2-yard line. McMinn, lined up in its heavy package, fumbled the ball into the end zone, but this time offensive lineman Bryce Snyder pounced on the loose ball before it could bounce out of bounds, averting disaster and giving the Cherokees the go-ahead touchdown at 10:25 left in the third quarter.

A high snap for Walker Valley resulted in a 15-yard loss on second down, and Conner Bates sacked Lay in the end zone the next play for the first of two McMinn safeties. The play would’ve been a safety, anyway, as the Mustangs were called for holding in the end zone.

Spencer Sullins tacked on three points with a 23-yard field goal to inch the McMinn lead to 26-14 with 5:05 left in the third quarter.

Jaryd Gable produced the Cherokees’ second safety blocking a Walker Valley punt in its end zone with 10:35 remaining in the game. Thompson finished the eight-play drive after the safety kick with his second visit to the end zone from nine yards out, which proved the backbreaker in extending the McMinn lead to 35-14 with 6:18 left.

Thompson finished the game with 138 yards and two touchdowns on 22 carries. On defense, Gable and Aiden Wilson recorded several tackles for loss, with Wilson and Bates also sacking Lay twice each.

Hester’s quarterback sneak from the heavy package gave McMinn a 42-14 lead with 1:20 left. Walker Valley scored its last touchdown in four plays after a Spencer Jackson kickoff return to the Cherokees’ 22-yard line.

“To get through Fall Break week and have a win in the region like that, I’m tickled to death because it just seemed like a long week to try to keep them focused on what they were doing, and that may have had something to do with the first half,” Cagle said. “But we locked in the second half and got out of here with the victory.”