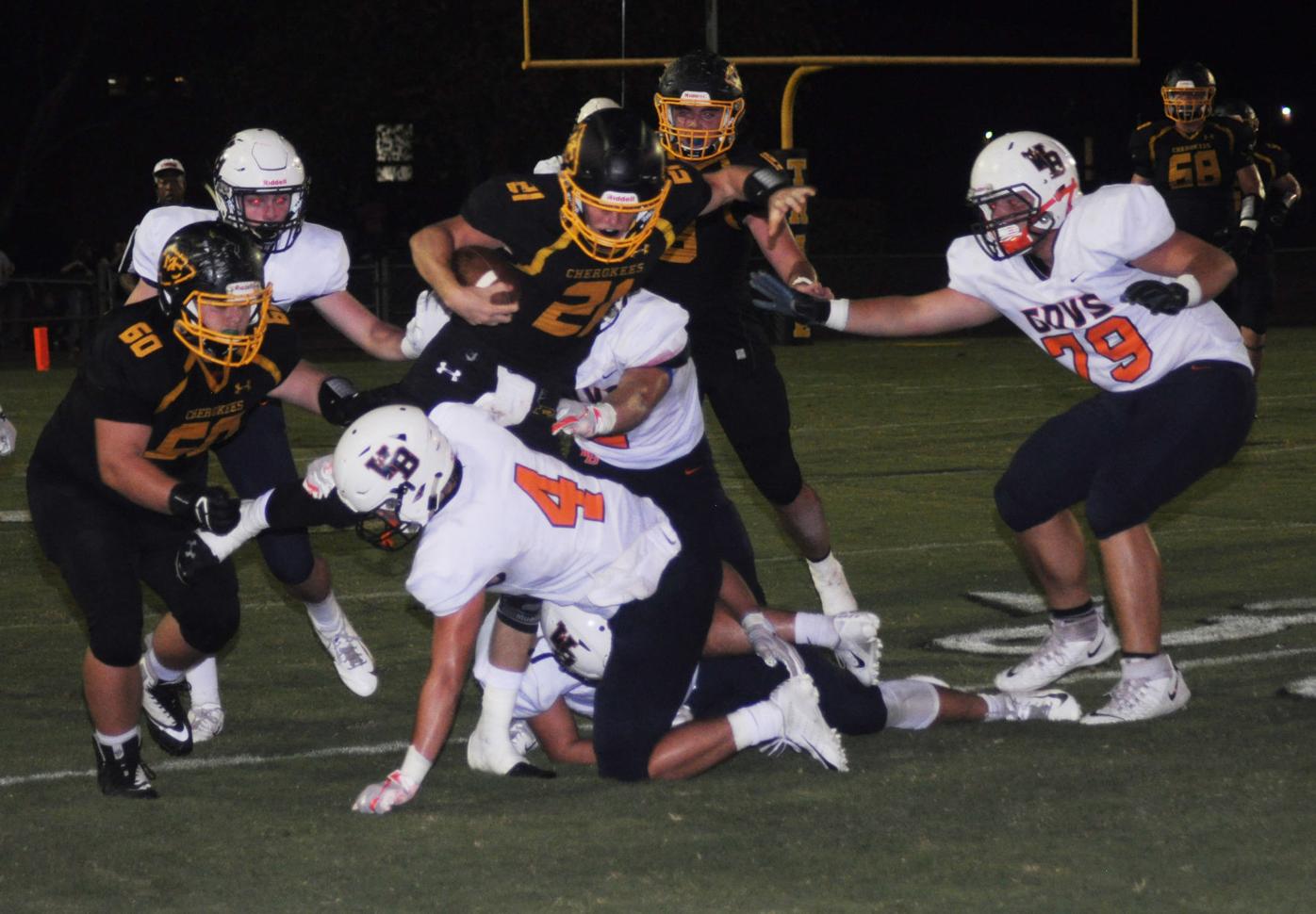 McMinn County quarterback Parker Manney (21) maneuvers his way through traffic as offensive lineman Hayden Hinkle (60) prepares to block. Manney ran for 193 yards and two touchdowns on 20 carries in the Cherokees’ 42-17 win over William Blount on Friday at Cherokee Stadium. 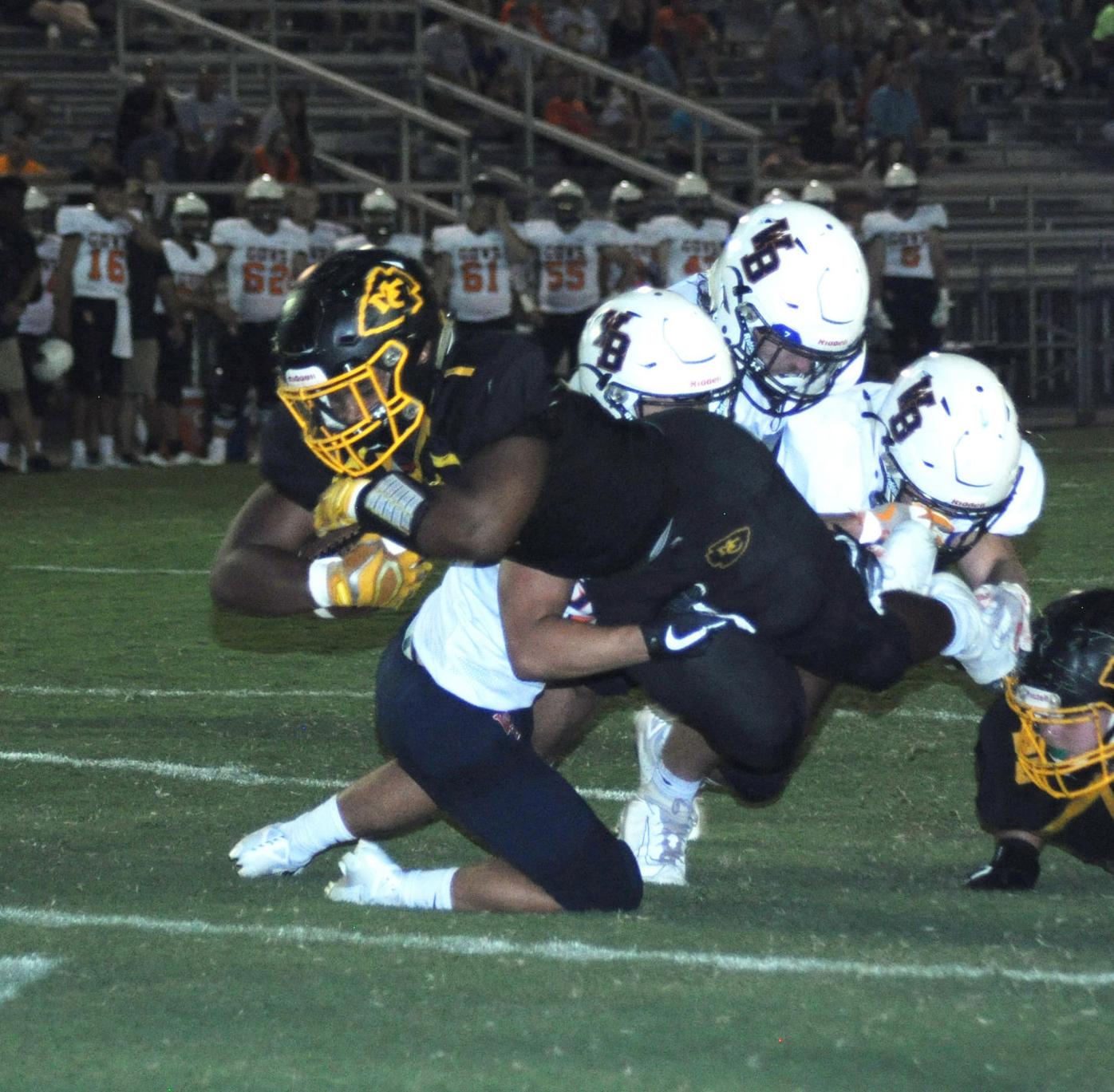 McMinn County’s Jalen Sharp (1) dives in the end zone for a touchdown Friday at Cherokee Stadium. Sharp ran for 63 yards on 13 carries in the Cherokees’ 42-17 win over William Blount. 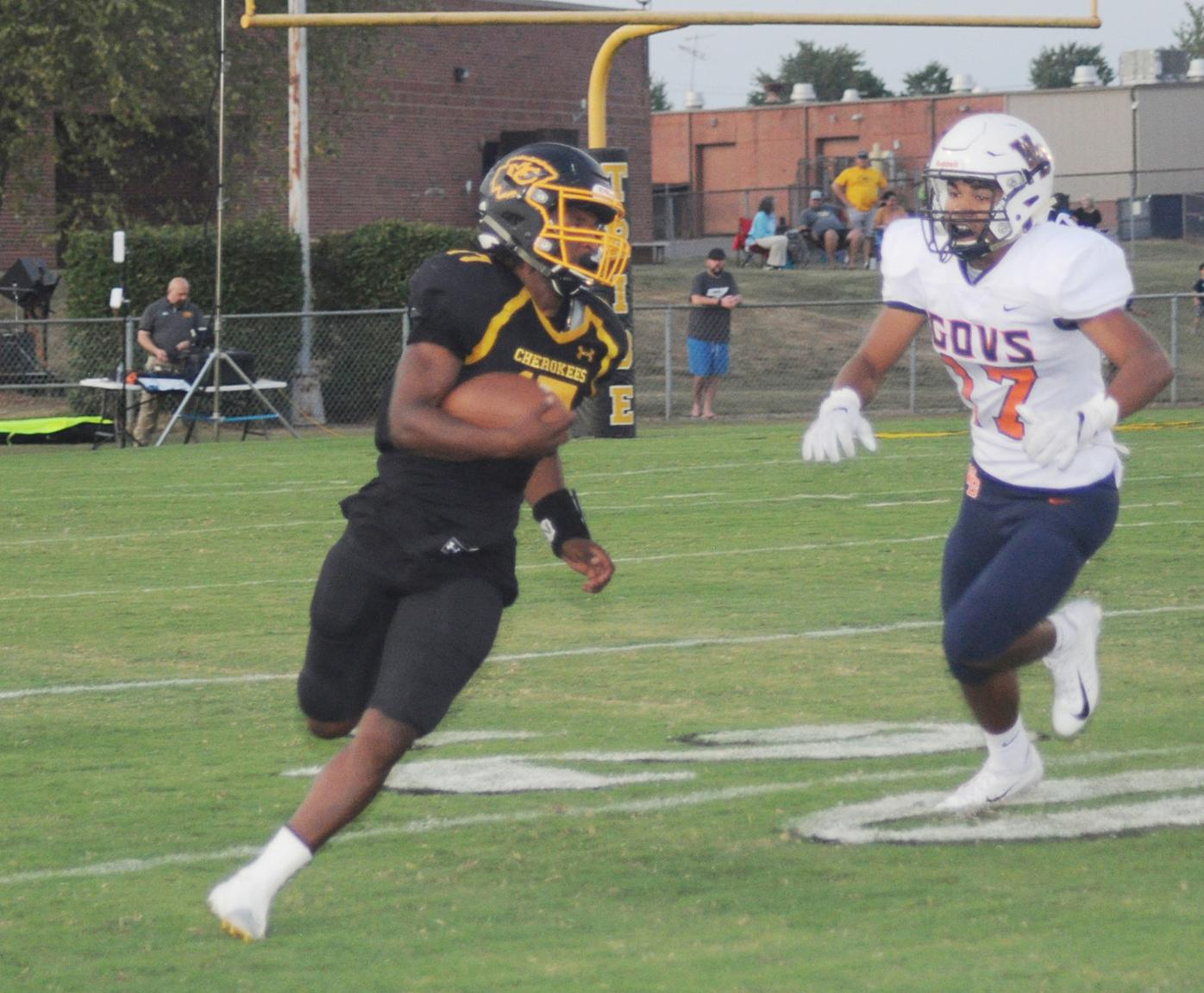 McMinn County quarterback Parker Manney (21) maneuvers his way through traffic as offensive lineman Hayden Hinkle (60) prepares to block. Manney ran for 193 yards and two touchdowns on 20 carries in the Cherokees’ 42-17 win over William Blount on Friday at Cherokee Stadium.

McMinn County’s Jalen Sharp (1) dives in the end zone for a touchdown Friday at Cherokee Stadium. Sharp ran for 63 yards on 13 carries in the Cherokees’ 42-17 win over William Blount.

Parker Manney estimated he was “about 95%” heading into McMinn County’s game Friday against William Blount.

That was more than enough for the senior quarterback to be a deadly part of a one-two punch with running back Jalen Hunt, as the Cherokees rolled up 532 team rushing yards in a convincing 42-17 takedown of the Governors at Cherokee Stadium.

The Tribe is off to a 4-0 start for the first time since the 1999 season and is 2-0 in Region 2-6A against two opponents it needed to beat to position itself for a playoff berth.

Manney had been day-to-day earlier in the week after tweaking his knee in McMinn’s previous win at Ooltewah, but he said he was feeling good at practice by Wednesday and almost fully up to speed by game time.

And it showed as he kept 20 times for 193 yards and two touchdowns rushing, breaking several dazzling runs against a William Blount defense that appeared to be keying on Hunt.

“I was about 95%, pretty close to 100% as possible,” said Manney in an interview with The Daily-Post Athenian. “I’ll be even better next week. I just kept seeing open field and tried to get as many yards as possible.”

“Both of those guys had a phenomenal game, and a whole bunch of those plays were broken plays,” said McMinn Coach Bo Cagle. “I don’t think we executed as well as we wanted to tonight, especially offensively. We shot ourselves in the foot, we left two touchdowns in the first half when we got the ball and didn’t score. We’ve still got a lot of things to work on, but when you’ve got somebody like Parker and you’ve got somebody like Jalen Hunt and they can make a lot of bad plays good, and they showed that tonight.”

Jalen Sharp added 63 yards and a visit to the end zone on 13 touches, and Nelan Evans rushed five times for 54 yards and McMinn’s final touchdown with 2:13 left in the game.

“You’ve got to give a lot of credit to that offensive line, because if everybody in that stadium and everybody on the sideline and everybody on the field knows where the ball is going, it just becomes who is going to handle who, and our offensive line was handling their front and their linebackers,” Cagle said. “Even when they were playing things right, we were getting five or six yards, so we were getting a good push up front.”

McMinn’s defense, meanwhile, held William Blount to only 25 rushing yards and 170 yards of total offense. Of the Govs’ yards, 49 of them came on the first play, with quarterback Trey Clemmer launching a bomb to Zach Gardner, who got open behind the Tribe secondary.

But before Gardner could reach the end zone, Jyren Hammonds chased him down and punched the ball out from behind, and Hunt recovered the fumble at the William Blount 12-yard line for McMinn.

“Jyren runs it down and punches it out from the back side, and then for Hunt to be able to get it, that means we’ve got people running to the ball and not giving up on the play,” Cagle said. “So it was a great hustle and effort play.”

McMinn’s ensuing drive lasted more than six minutes but ended with an interception at the Govs’ 17, but a Cade Hipps sack helped stall William Blount’s offense.

The Tribe’s next possession fared better, helped by the Govs’ 15-yard illegal participation penalty and finished by Hunt slicing up the middle of the field 12 yards for a 7-0 McMinn lead 29 seconds into the second quarter.

William Blount trimmed the margin to 7-3 on a 28-yard Job Matossian field goal, but Hunt and Manney went back to work on McMinn’s next drive with runs of 24 and 23 yards, respectively. Facing second-and-11, Manney then kept on a sweep right and outraced the Govs 41 yards to put McMinn ahead 14-3 with 1:44 before halftime.

But Bryston Williams sparked the Govs by returning the ensuing kickoff to the McMinn 38, and three plays later, Clemmer hit Matossian for a six-yard touchdown pass that shaved the Tribe lead to 14-10 with 36 seconds before intermission.

That was enough time for Hunt to bust a 67-yard run that set McMinn up at the Govs’ 3, and Sharp finished off the remaining yards to bump the Cherokees’ lead back to two scores, 21-10, heading to the locker room.

Hunt picked up right where he left off on the Tribe’s second-half opening possession, scorching William Blount on the third snap for 75 yards and a 28-10 advantage. After another three-and-out, Noah Brown returned the punt more than 40 yards to the Govs’ 33, and three plays later, Manney dodged several William Blount would-be tacklers and raced 20 yards to paydirt, putting McMinn ahead a commanding 35-10 with 7:03 left in the third quarter.

“He made some Houdini get-outs I hadn’t seen in a long time,” Cagle said of Manney’s second touchdown run. “When he scored that touchdown up the middle, they brought the house, and I don’t know how he got out of there.”

Jon Barton provided a potential spark for William Blount with a punt block for a touchdown that cut McMinn’s lead to 35-17 with 48 seconds left in the third. But McMinn’s ensuing possession melted more than five and a half minutes off the clock, with a 21-yard Hunt run on third-and-15 helping the Tribe overcome two penalties.

Jalan James and Will Miller ended the Govs’ last two offensive series with an interception each.

“The most exciting thing I said to the kids when it was over was, we won that game 42-17, which looks like we played pretty well,” Cagle said. “And we didn’t execute the way that we can. So that means we’ve got an upside. This isn’t the best we’re going to play all year. We’re going to get better. Sometimes you get frustrated, but I feel excited about that because I know we can do better than that, and it’ll help us in the future.”