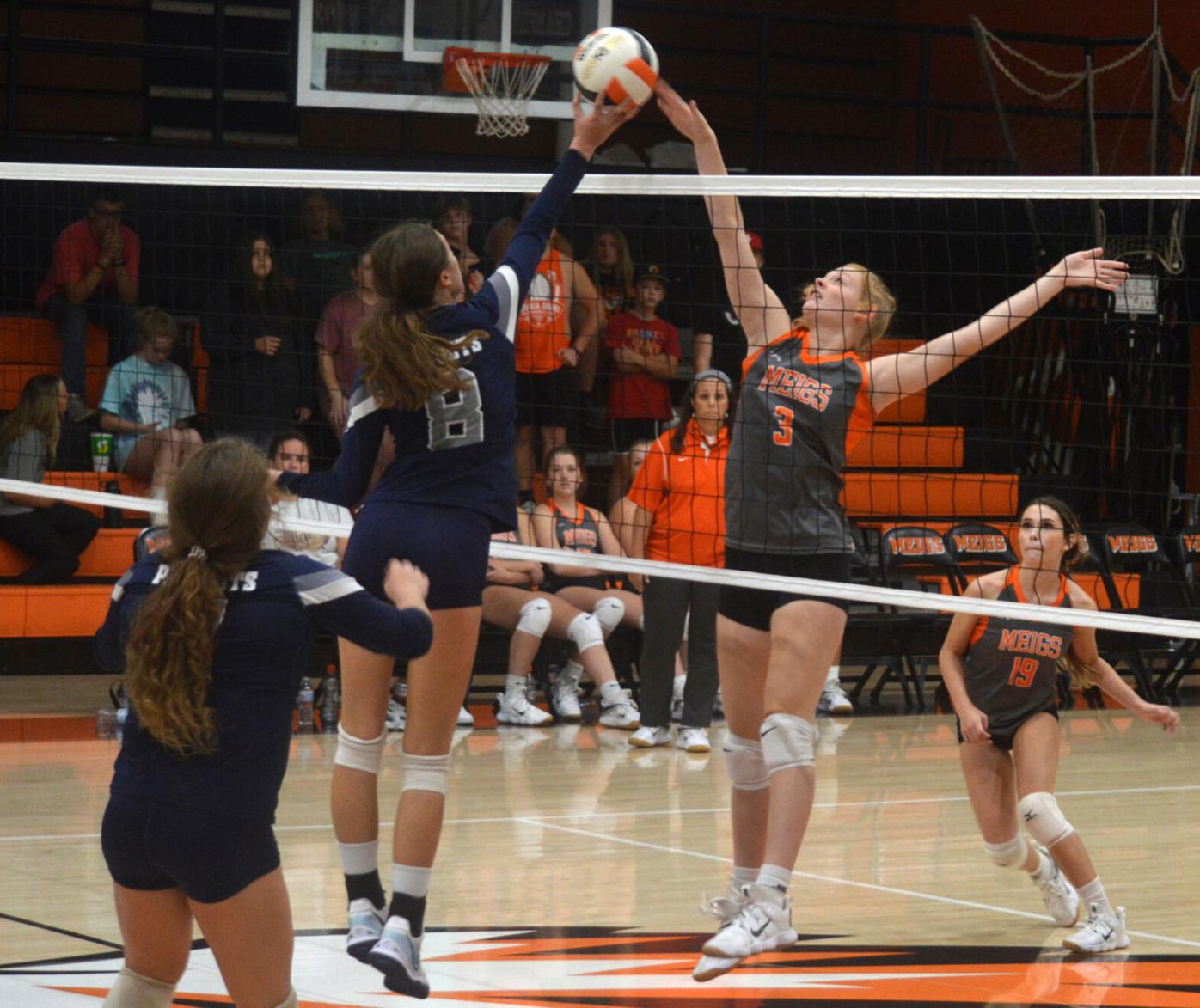 Meigs County’s Julia Howard battles a CSAS player at the net during Monday’s district match. The Lady Tigers lost in straight sets, but rebounded on Tuesday with a win over Tellico Plains. 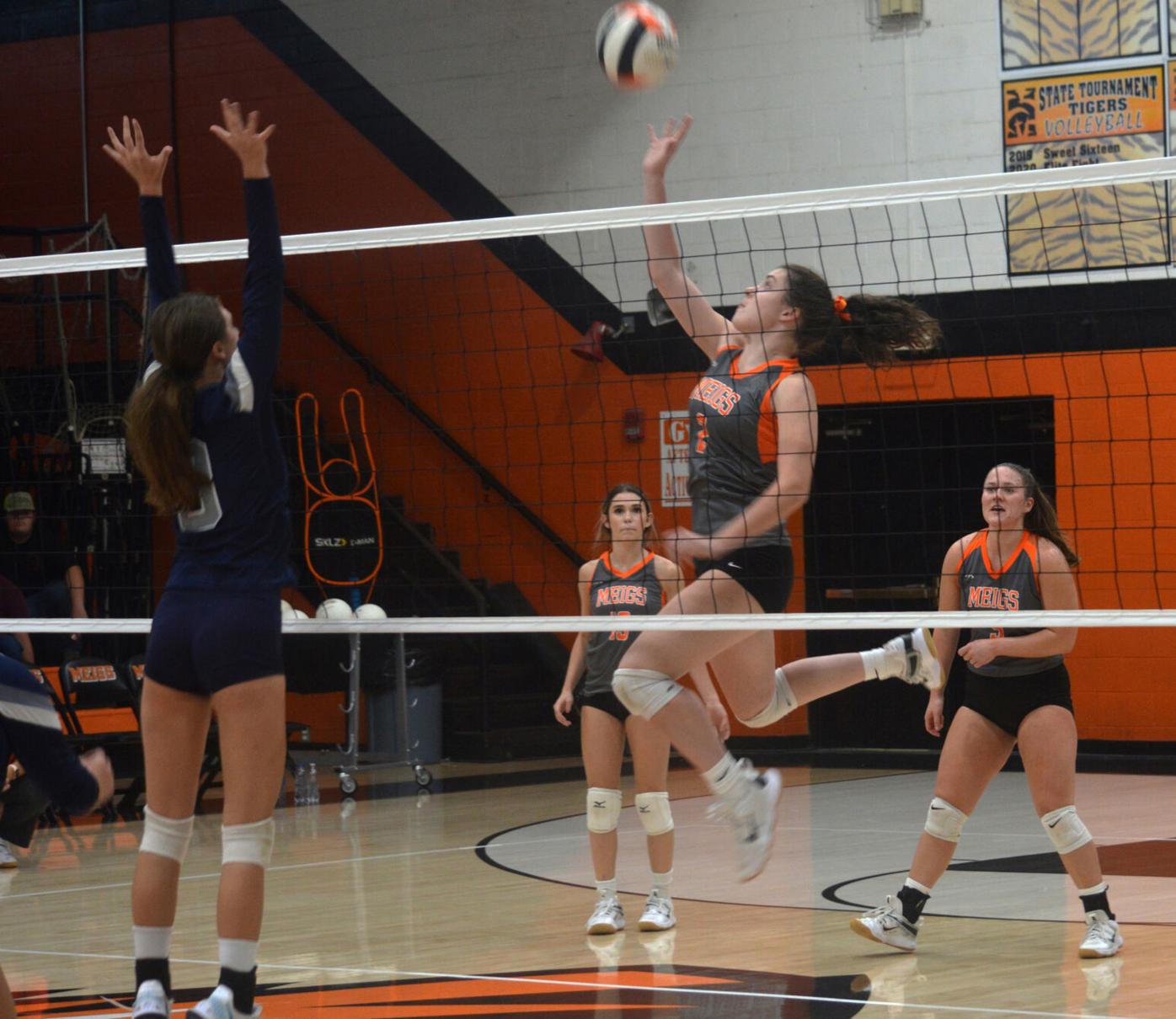 Meigs County’s Talley Lawson makes a running leap to tap the ball away during Monday’s match versus CSAS.

Meigs County’s Julia Howard battles a CSAS player at the net during Monday’s district match. The Lady Tigers lost in straight sets, but rebounded on Tuesday with a win over Tellico Plains.

Meigs County’s Talley Lawson makes a running leap to tap the ball away during Monday’s match versus CSAS.

DECATUR — The Lady Tigers rebounded with an important district volleyball victory over Tellico on Tuesday after falling to CSAS on Monday.

Meigs lost the first set, but then controlled the match from there with three straight set wins. The set scores were not available before press deadline.

“We played well together tonight,” Swafford said. “We picked each other up. Madison Fischer and Toryn Lawson both played good defensively, but everyone stepped up and we played as a team.”

The first set did not go well as the Lady Tigers came out a little sluggish.

“We had too many mistakes and too many service errors,” Swafford said.

Meigs controlled the next three sets, however, on the way to a 3-1 victory.

“We control our own destiny,” Swafford said. “We have a big game at Lookout Valley and if we win there we still have a chance to win the district and we can go forward with our goals.”

“It was a back and forth match and we lost the final set by two points,” Swafford said, agreeing that it should be an even matchup on Thursday.

The Lady Tigers lost a large part of last year’s team due to departing seniors, but still managed to win all but one match so far this year.

That inexperience, however, finally caught up with Meigs as the Lady Tigers lost in three straight sets at home to Chattanooga Arts and Sciences (CSAS). The Lady Patriots won 25-23, 25-13 and 25-19.

“We fought hard and we came out strong in the first set,” Swafford said. “We will have to make some adjustments the next time we play them.”

Swafford said CSAS didn’t pose any particular problems strategy-wise, it was just that CSAS has very good and experienced players.

“The have players that play year round and have been playing since they were young,” Swafford said. “We still have an inexperienced roster. But we fought to the end, I’m proud of them.”

CSAS 3, Meigs 0: The two teams battled hard early with kills by Talley Lawson, Julia Howard and a block by Howard allowing the Lady Tigers to keep the match tied at 6-6.

The Lady Tigers eventually led 23-19 before the Lady Patriots rallied to tie the match at 23-23 before taking the opening set 25-23.

Meigs stayed relatively close midway through the second set, trailing 16-12. But the Lady Patriots scored nine of the next 10 points to win the second set 25-13.

Like the first set, the third set was one of rallies and counter rallies.

CSAS grabbed a 6-4 lead only to see Meigs rally to go ahead 8-7. The Lady Patriots, however, were able to stop Meigs’ rebound to take a 16-11 advantage.

A service ace by Lawson later made it 21-17, but CSAS took control from there on the way to a 25-19 win and take the match in straight sets.