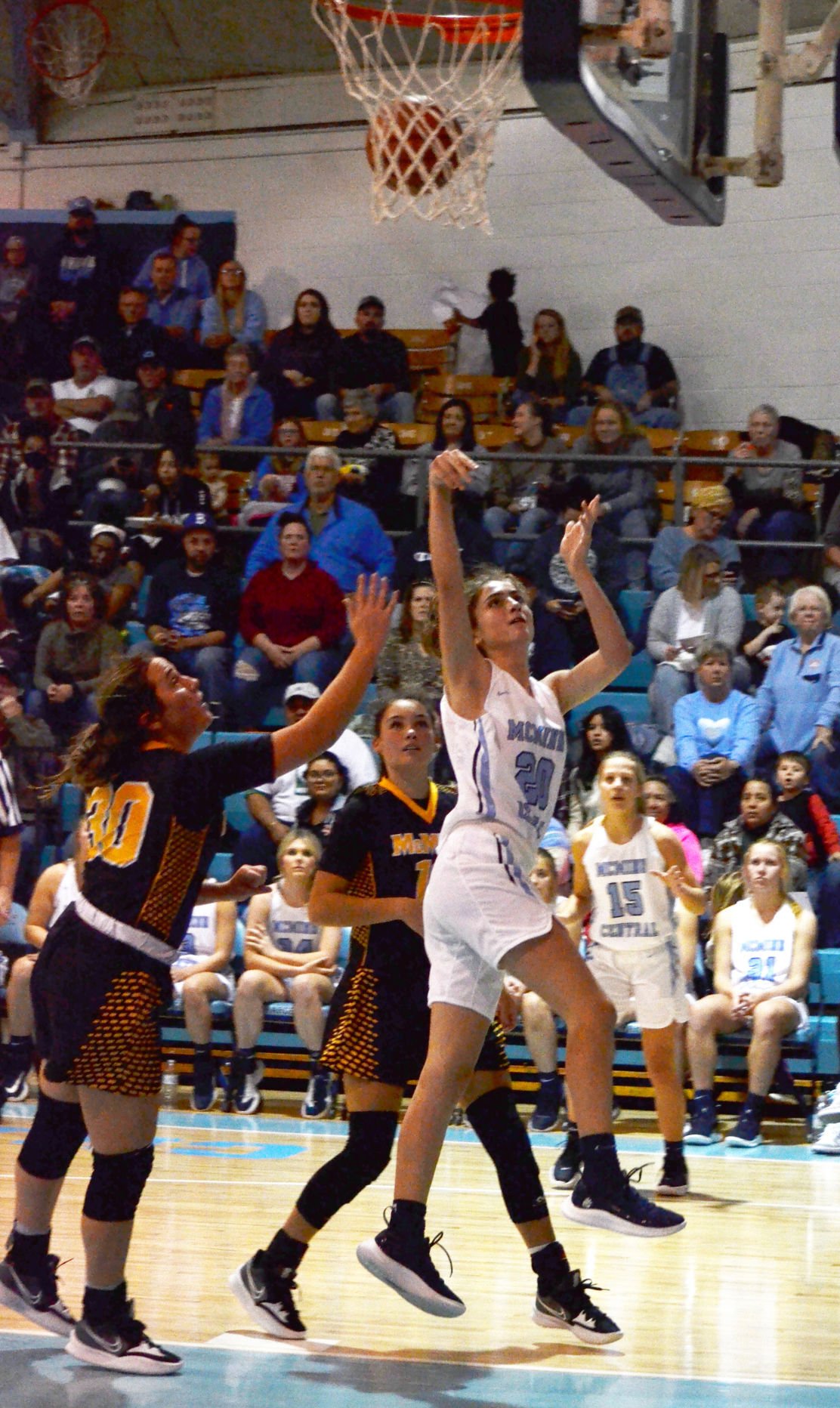 McMinn Central’s Karina Bystry (20) follows through on a shot after slipping past McMinn County’s Konstantina Papaioannou (30) and Aubrey Gonzalez on Tuesday in The Roundhouse. Bystry, a freshman, scored 18 points in her first high school start, helping the Chargerettes to an 86-73 win. 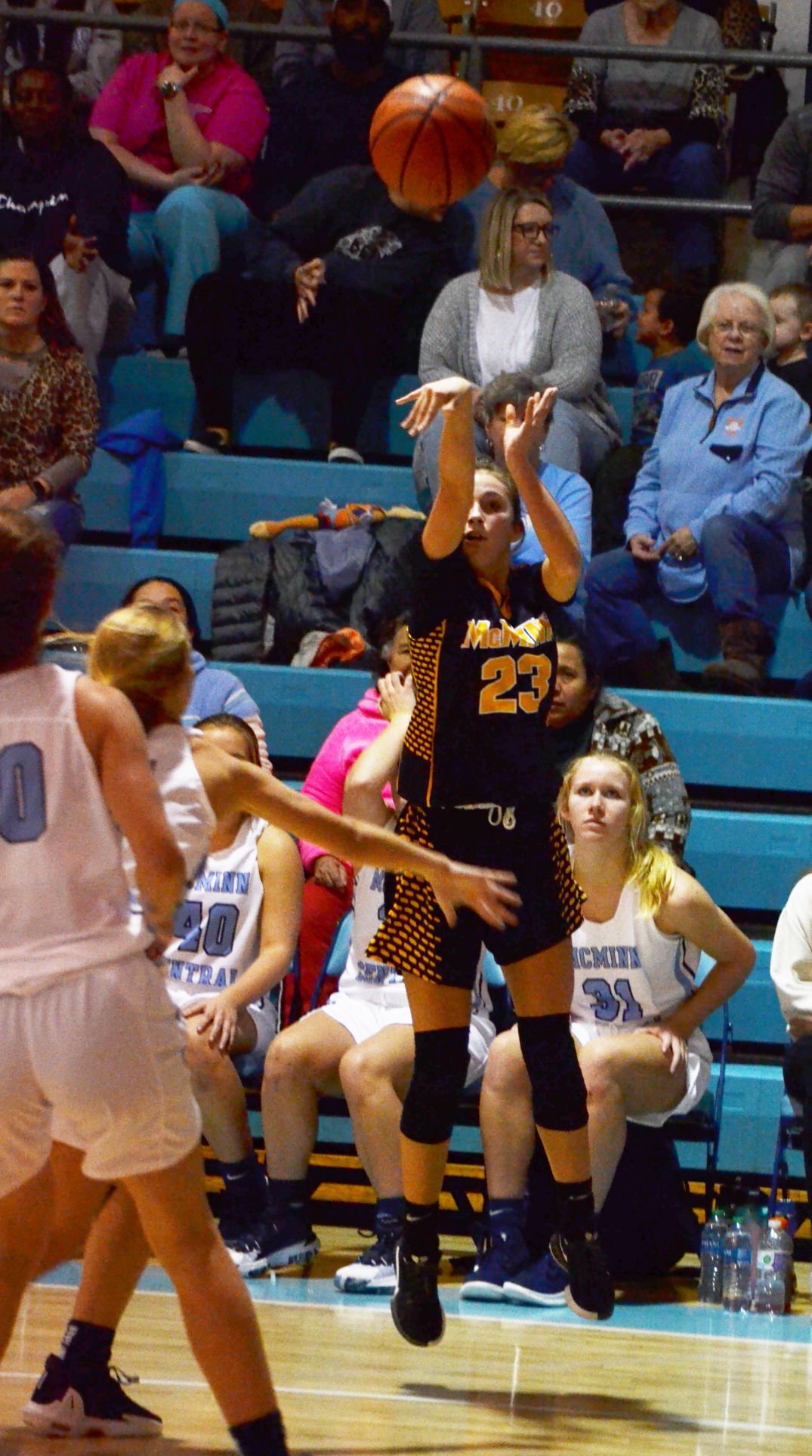 McMinn County’s Peytyn Oliver (23) shoots a 3-pointer against McMinn Central on Tuesday in The Roundhouse. Oliver scored a career-high 43 points and made nine threes in the Lady Cherokees’ 86-73 loss. 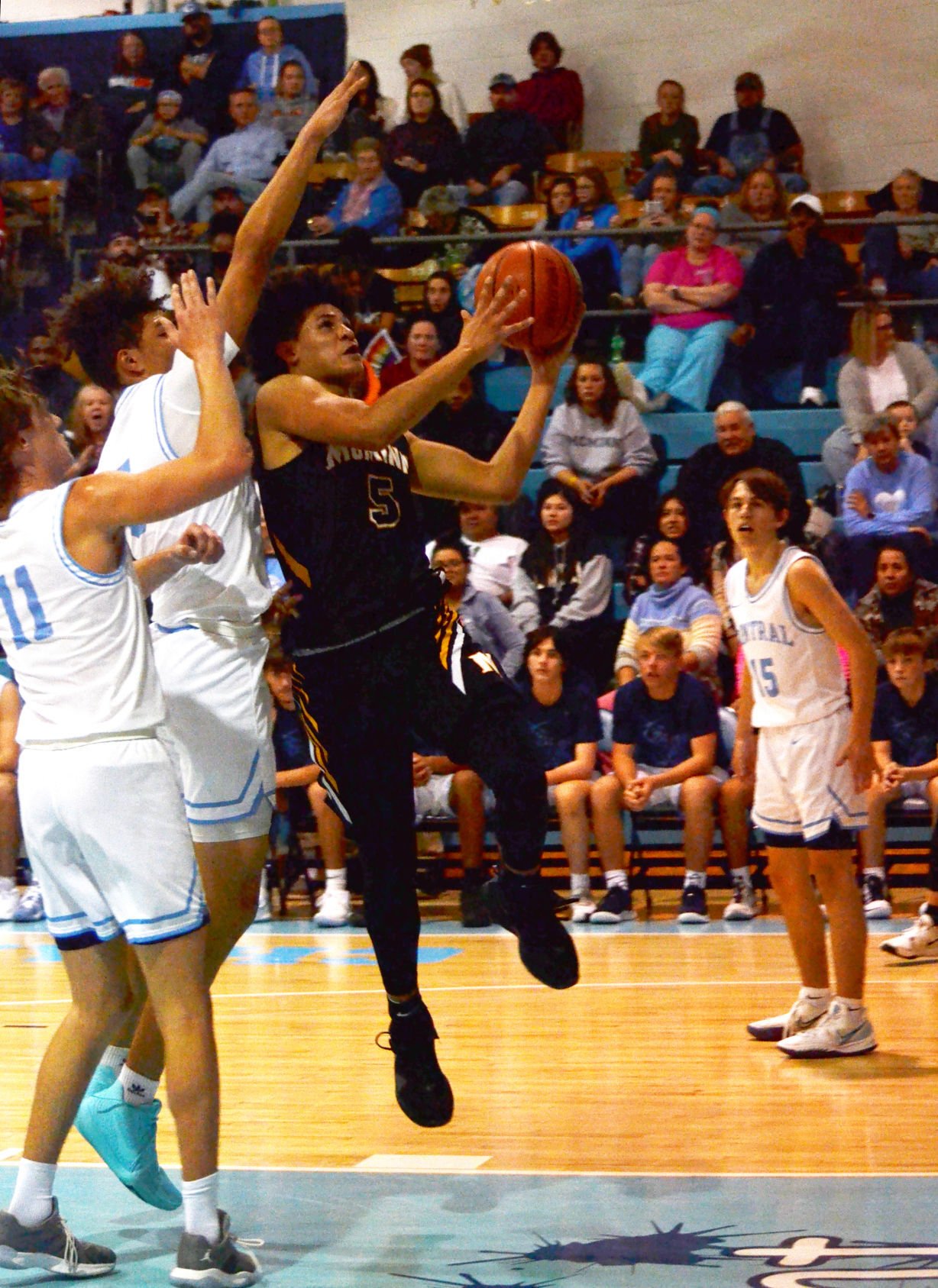 McMinn County’s Ty Runyan (5) slips past McMinn Central’s Gabe Masingale (11) and Darius Carden (partially obscured left), while Will Cooper (15) looks on, Tuesday in The Roundhouse. Runyan scored a game-high 27 points to lead the Cherokees to a 66-57 win. Carden scored 18, Cooper 12 and Masingale 11 for the Chargers.

McMinn Central’s Karina Bystry (20) follows through on a shot after slipping past McMinn County’s Konstantina Papaioannou (30) and Aubrey Gonzalez on Tuesday in The Roundhouse. Bystry, a freshman, scored 18 points in her first high school start, helping the Chargerettes to an 86-73 win.

McMinn County’s Peytyn Oliver (23) shoots a 3-pointer against McMinn Central on Tuesday in The Roundhouse. Oliver scored a career-high 43 points and made nine threes in the Lady Cherokees’ 86-73 loss.

McMinn County’s Ty Runyan (5) slips past McMinn Central’s Gabe Masingale (11) and Darius Carden (partially obscured left), while Will Cooper (15) looks on, Tuesday in The Roundhouse. Runyan scored a game-high 27 points to lead the Cherokees to a 66-57 win. Carden scored 18, Cooper 12 and Masingale 11 for the Chargers.

ENGLEWOOD — McMinn Central’s girls survived every threat their county rivals threw at them.

Whether it was McMinn County star point guard Peytyn Oliver erupting for a career-high 43 points, or the Lady Cherokees’ fourth-quarter rally that cut the Chargerettes’ lead to six points with more than two minutes left, Central had the answers for all of it and treated its home crowd to an 86-73 victory Tuesday in The Roundhouse.

Freshmen Karina Bystry and Reagan Baker made their first high school starts for the Chargerettes (3-1), and that decision from coach Johnny Morgan worked out nicely as both finished among Central’s four double-digit scorers with 18 and 13 points, respectively.

“I feel comfortable with whatever starters they have out there, and we’ve gotten eight right now that’s doing the job, and fortunately we got one combination out there that just blitzed them and pressed and we got turnovers and we score, score, score, and we’ve got another group that is a little better offensively,” said Morgan, who increased his career wins count to 990. “And this is the time of year you’ve just got to figure things out.”

Bystry’s three-point play with 1:40 left, off a layup after a Carlee Rule steal and assist, came at a perfect time for the Chargerettes, too. The Lady Cherokees (1-2) were in the midst of a 12-1 run that brought them within 76-70 after trailing by as much as 17 points earlier in the fourth quarter.

After Bystry bumped Central’s lead back to 79-70, Molly Masingale, who led the Chargerettes with 19 points, delivered another three-point play with 56.3 seconds left to effectively seal the win.

It was a win that looked anything but certain for Central early. Oliver made the first four of her nine 3-pointers for the game to stake McMinn to a 19-7 lead.

“Peytyn Oliver is a player. She’s a player. And every one of them knows, they’ve got the green light,” said McMinn coach David Tucker. “We want to shoot the ball. And we’ve got to get in a little bit better condition, and we will as we go along. And it’s all good for the Lady Cherokees.”

Oliver continued her long-distance assault with four more threes in the second quarter, constantly punishing Central defenders for lagging off her to finish the half with 33 points and eight 3-pointers. Oliver was on pace at halftime to set a new state record for threes in a single game — the current record is 15, which was set by White County’s Gracie Dodgen last year.

“Sometimes they do what you ask, and sometimes they don’t do what you ask them,” Morgan said. “And the disappointing thing is, Peytyn didn’t hit a single three with somebody guarding her. She hit every single one of them wide open. And no matter who I put out there, I said don’t leave her. Get out here and make her give it up, make her take it to the bucket, or whatever, but we just backed off and let her shoot threes, and she just kept making them, and we never did go out there.”

But despite Oliver’s barrage, the Chargerettes pulled ahead for good just over two minutes into the second quarter. Turnovers continued to plague McMinn, as it committed six more in that period, and threes from Masingale and Reagan Baker and four more points from Mayfield allowed Central to build a 45-42 lead at the break.

After Oliver’s ninth and final 3-pointer early in the third quarter, the Chargerettes made sure to have two or more defenders on McMinn’s point guard as much as possible and force her to pass the ball off. It worked well enough for Central to force eight more McMinn turnovers in the third, and the Chargerettes built a 71-55 lead heading into the fourth.

“The only thing we’re trying to do on our press, they’re getting it into her (Oliver), and we just want to double her and make her give it up and then not let her have it back,” Morgan said. “It’s not that we had two on her, but we’re double-teaming the ball, and a lot of times on our press we’re double-teaming the ball and everybody’s rotating. With her, we just stayed there and tried to deny her.”

Central’s largest lead was 75-58 early in the fourth before Oliver made two free throws of a 1-and-1 to start the Lady Tribe’s closing run. Two steal-and-scores from Addie Smith helped bring McMinn back within six points with 2:15 left, and five missed free throws during that run could’ve brought the Lady Cherokees even closer before Bystry and Masingale had the final answers for the Chargerettes.

In the end, 28 turnovers for the game were too much for McMinn to overcome, despite Oliver’s career night, and the Lady Cherokees’ county rivalry losing streak grew to five games.

“The team that loses usually makes more turnovers. I thought the effort was good, and we were there, and we missed a few free throws at the end,” Tucker said. “But the effort was good and so, as long as we play hard, that’s all I’ve got to say. We laid it on the line.”

CHEROKEES 66, CHARGERS 57: While Central’s boys were never out of Tuesday’s Roundhouse nightcap, McMinn was never really threatened, either.

Ty Runyan scored a game-high 27 points, Hayden Smith added 10, and the Cherokees (2-1) led for good after late in the first quarter on the way to their seventh win in the last eight games of the county rivalry. It also gave new Tribe head coach Randy Casey a victory in his first taste of the rivalry against the Chargers.

“We’re getting better, and I thought defensively we did a good job,” Casey said. “We’ve got to execute better on the offensive end, and that’s because those guys coming in, our timing is not where it needs to be and things like that, and our conditioning is not where it needs to be with those guys. But that’s all part of the process, and I’m happy to come over here, because those guys play hard, and happy to come home with a win.”

Central (0-4) jumped ahead 7-1 before Smith and Runyan deuces and a Davion Evans triple made for an 8-0 go-ahead McMinn run. Darius Carden, who led the Chargers with 18 points, evened the score briefly at 9-9, but Runyan, Smith and Evans combined for six straight Tribe points for a lead it never surrendered. Tucker Monroe made a 3-pointer from about 30 feet at the horn, putting the Cherokees ahead 18-12 to end the first quarter.

Trent Peak provided a spark for McMinn with eight points in the second quarter, including two 3-pointers. Combined with seven of Runyan’s points, the Cherokees led 33-22 at halftime. McMinn led by as many as 15 points twice in the third quarter, with seven more from Runyan and four from Smith.

But with McMinn up 50-35, Central got a late spark with Will Cooper converting a three-point play, then Isaiah Edmonds getting a putback of a missed free throw at the third-quarter buzzer, giving the Chargers the last five points of the period and narrowing the Cherokees’ lead to 50-40 entering the fourth.

But Runyan continued his steady performance with a three, a two and a three-point play, pushing the Tribe to its largest lead at 60-44.

“We felt like that he was the guy who they had no answer for, and they couldn’t guard him,” Casey said of Runyan. “And we tried to expose that, and he did did a good job of taking advantage of his match-ups.”

Central got as close as 64-57 points with 1:05 left but never seriously threatened a comeback. A rough night at the free throw line was one thing hampering the Chargers all night.

“We just couldn’t get over the hump. We were 13-30 from the free throw line, and I don’t know how many layups we missed,” said Central coach Daniel Curtis. “We’re doing things that we shouldn’t be doing, little mistakes, mental mistakes. But, it’s a young team. We have three guys who have played varsity and the rest of them are brand new to it. But we’re going to jell, and we’ll be alright.”

Both McMinn teams went on to play two games each in the Thanksgiving tournament at Heritage High School, facing off with Heritage on Friday and Maryville on Saturday. Results from those games will be included in the Tuesday edition of The Daily Post-Athenian.

McMinn’s next games are Monday at Meigs County in another area rivalry. The girls’ game starts at 6 p.m. and the boys at 7:30.

Central had the holiday weekend off and returns to action Tuesday, Nov. 30, back in The Roundhouse against East Hamilton, also with a 6 p.m. start for the girls and 7:30 for the boys.