Meigs County’s Jaci Powell goes up for a shot during the Lady Tigers’ 62-41 victory over McMinn Central on Tuesday. Powell finished with 20 points. 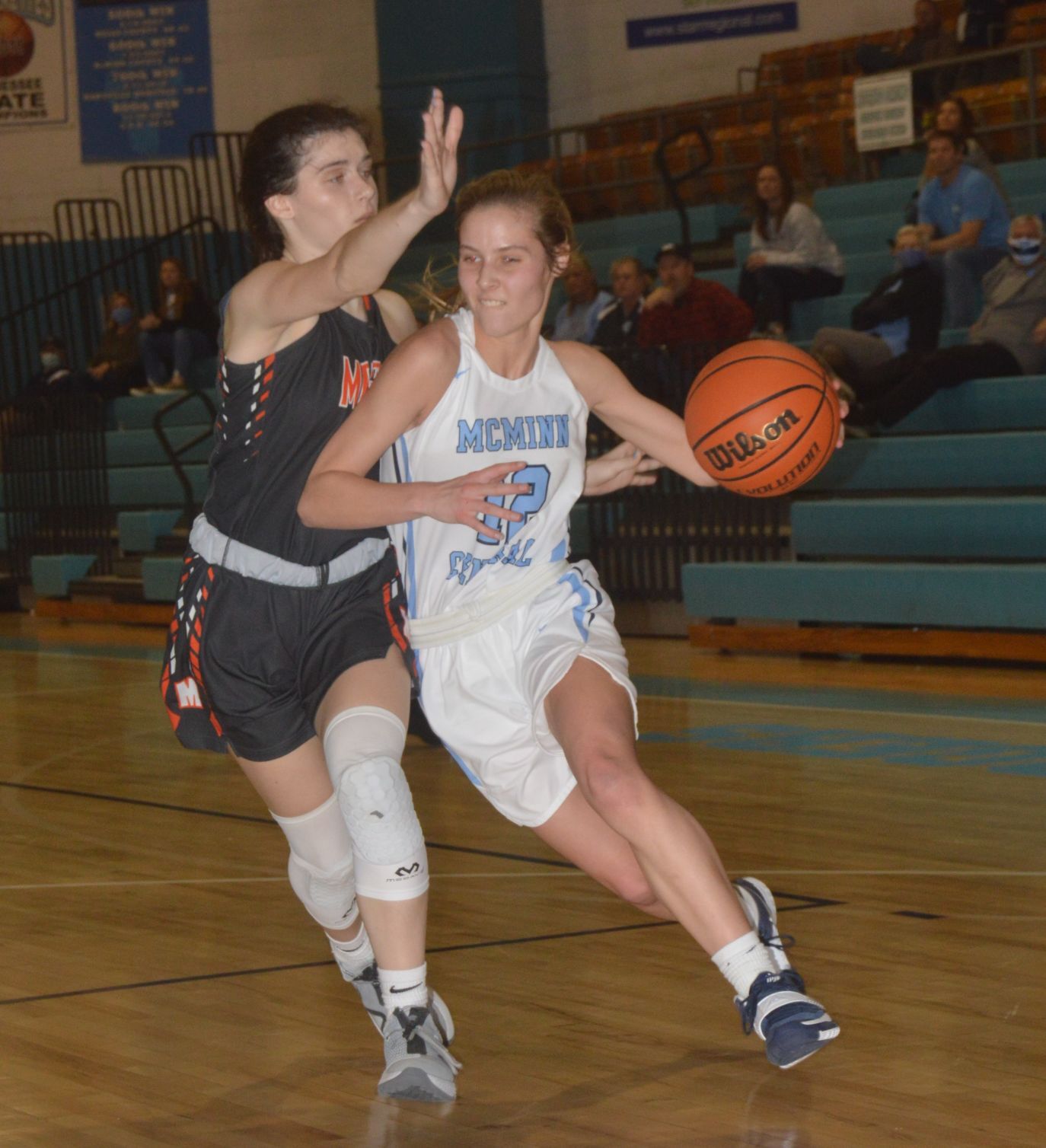 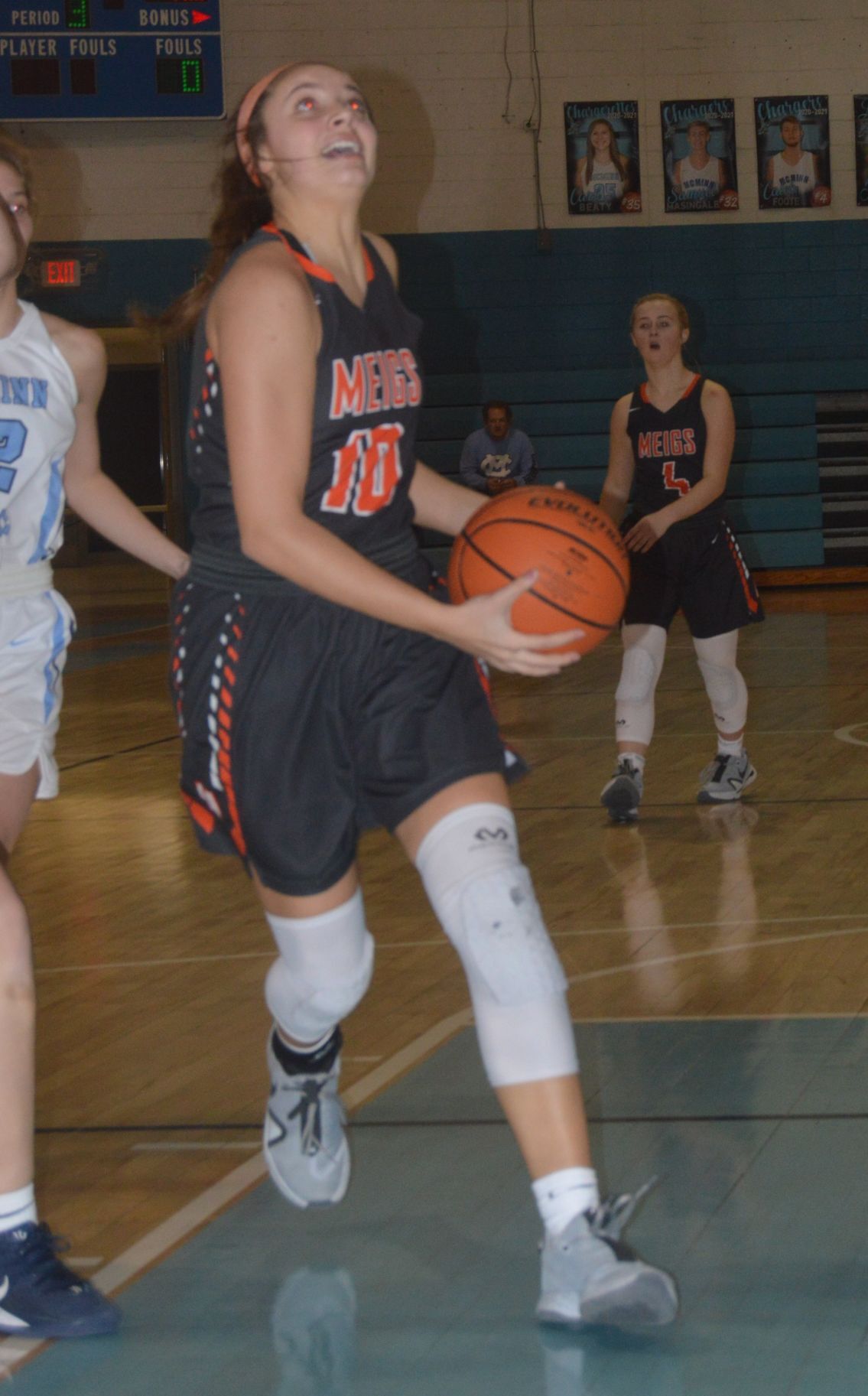 Meigs County’s Jaci Powell goes up for a shot during the Lady Tigers’ 62-41 victory over McMinn Central on Tuesday. Powell finished with 20 points.

ENGLEWOOD — The Lady Tigers defeated the Chargerettes in convincing fashion Tuesday and, at least temporarily, took control of District 5-AA.

Meigs jumped out to a 17-point lead in the first quarter and never looked back. The Lady Tigers hit six 3-pointers in the first half on the way to a 62-41 district victory over their district rivals.

“We got off to a fast start and we moved the basketball around well,” Meigs Coach Jason Powell said. “We shot the ball well. We got to the cup and when we didn’t we passed it out to our shooters. Defensively I thought we competed. Central is a quality team and it’s always a battle when you play them.”

Central Coach Johnny Morgan might dispute the idea that it was a battle.

“We have no fight in us,” Morgan said. “We have fight against teams that aren’t as good as us, but not against teams like this. We have a couple of players who have some fight, but we are looking for more.”

Morgan was frustrated not only with what he said was his team’s lack of fight, but also the execution of game plans and strategy.

“I’d call time out and explain what we wanted to do and then we’d go out there and it wasn’t anything like what we talked about,” Morgan said. “They shot the ball well, but we didn’t have anybody rushing out (with a hands up).”

Central is hoping to get back on track on Friday as the Chargerettes (14-4, 4-1) host Loudon at 6 p.m. in another district matchup. It is not known if the Chargers will also play, but that should be determined sometime on Thursday.

In a scheduling change, Central travels to Tyner on Tuesday, Feb. 9, replacing the scheduled game against East Hamilton.

Tennessee Gov. Bill Lee has extended sports events limitations with Executive Order 74, meaning only family members in the same households of athletes may attend games. No cheerleaders or dance teams will be allowed, as has been the case in recent months.

Kellan Baker scored for Central with 4:31 left in the first half, but then Jaci Powell hit a ‘3’ and a field goal to put Meigs up 17-2.

After another bucket by Baker, Meigs increased its advantage to 21-4 on buckets by Stone and Anna Crowder and that’s how the first quarter ended.

Maddox Mayfield started off the second quarter with a pair of field goals and two free throws, but Meigs countered with a bucket by Talley Lawson and a three-point play by Anna Crowder to make Meigs’ lead 26-10 with just under six minutes left in the first half.

A bucket by Stone and a three-pointer by Powell made it 31-10 before Central went on 5-0 run on buckets by Makinlee Buckner and Baker along with a free throw by Carsi Beaty.

Later, Baker completed a three-point play and Central trailed 35-17, but then Cayden Hennessee dropped in a ‘3’ for Meigs. Central’s Kara Crabtree made a bucket, but Meigs ended the first half with two free throws by Anna Crowder and then drilled a three-pointer at the buzzer to put Meigs up 43-19 at the half.

Meigs’ press was effective at times, forcing at least 12 turnovers in the first half.

Central was able to put together some offense early in the third quarter with Molly Masingale completing a three-point play and then Crabtree and Baker each making a bucket. Two free throws by Baker made it 47-28 with 2:58left in the third. Jaci Powell scored a pair of baskets for Meigs with Crabtree, Baker and Beaty each scoring for the Chargerettes.

The Lady Tigers went to the fourth holding a 51-34 advantage. Meigs outscored Central 11-7 in the final period to earn the 62-41 victory.

Powell led the Lady Tigers with 20 points, including three ‘3’s. Stone added 11. As a team, Meigs hit eight three-pointers, with six of them coming in the first half to get the Lady Tigers off to a fast start.

Baker led the Chargerettes with 15 points and Masingale finished with eight.