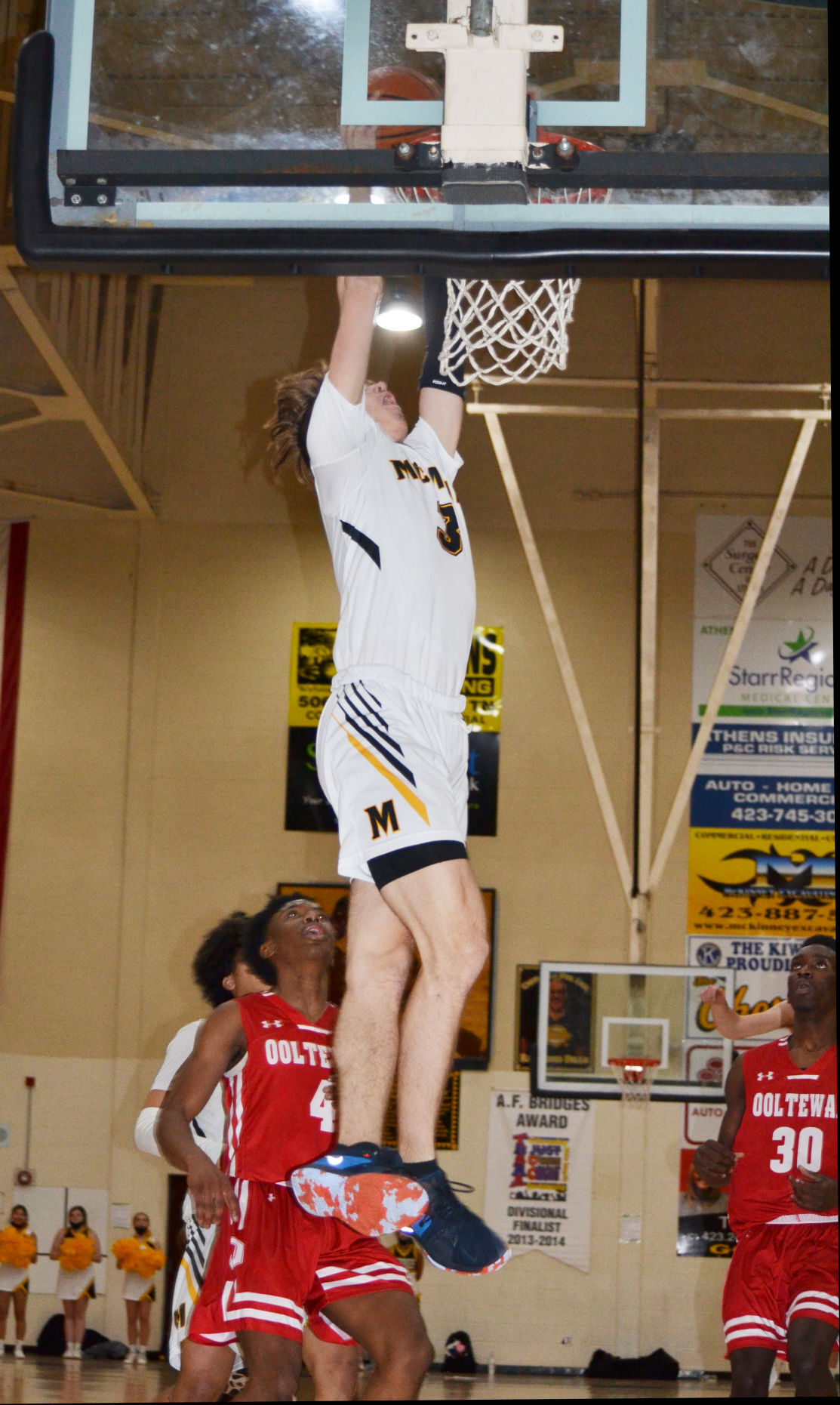 McMinn County’s Parker Bebb (3) rises for a two-handed dunk during the District 5-AAA tournament quarterfinals on Thursday at McMinn County High School. Bebb led the Cherokees with 18 points in their 73-54 win over Ooltewah, which clinched a berth in the Region 3-AAA tournament. 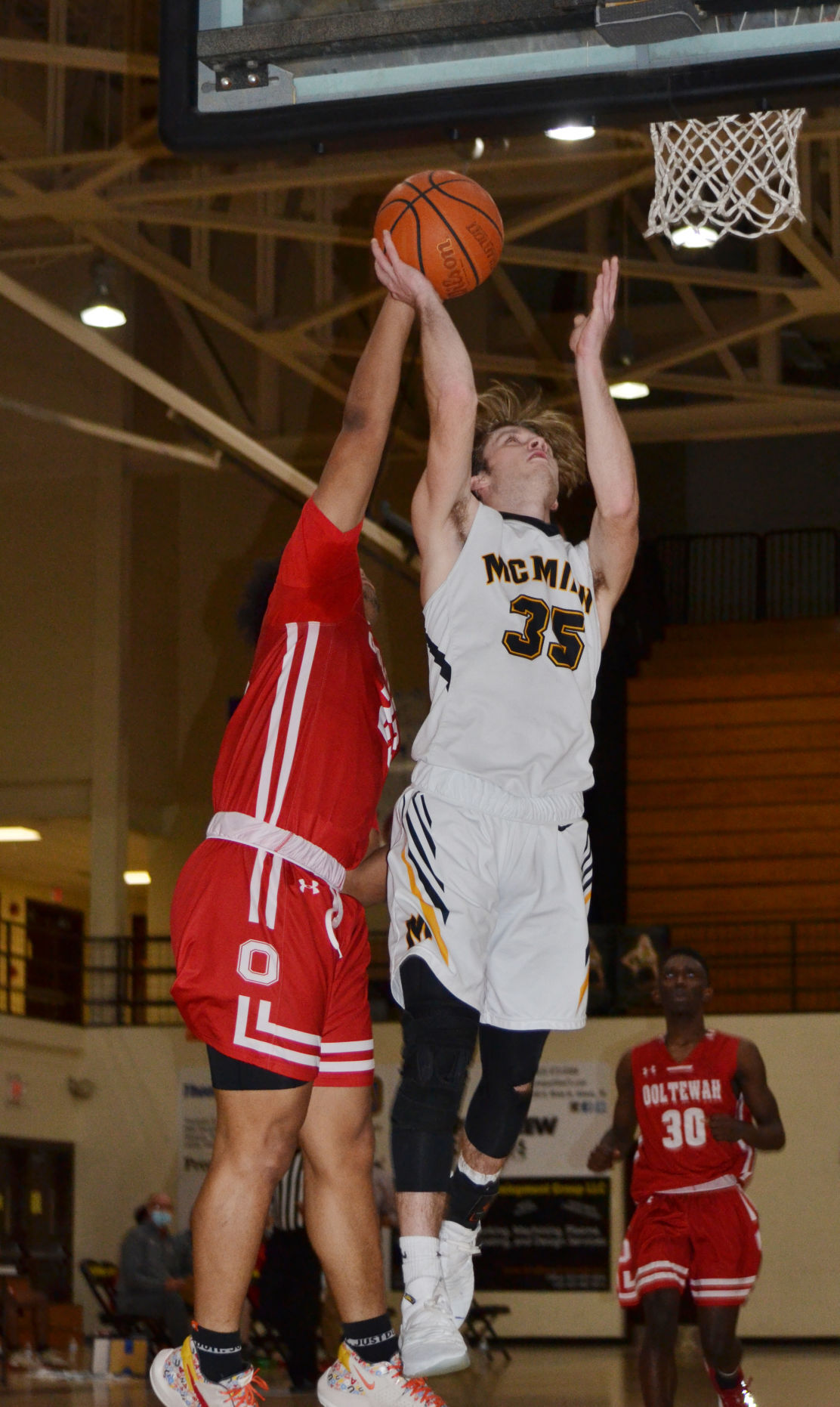 McMinn County’s Parker Bebb (3) rises for a two-handed dunk during the District 5-AAA tournament quarterfinals on Thursday at McMinn County High School. Bebb led the Cherokees with 18 points in their 73-54 win over Ooltewah, which clinched a berth in the Region 3-AAA tournament.

McMinn County wanted to land the first good punch. The Cherokees also knew that alone wouldn’t be enough, and did they ever play like it.

The No. 3 seed Tribe took its best shot from sixth-seeded Ooltewah for the majority of three quarters, then landed its knockout blow by outscoring the Owls 25-10 the rest of the game and claiming a 73-54 District 5-AAA tournament quarterfinals victory Thursday at McMinn County High School.

With the win, the Cherokees (15-12) got their revenge on the same Ooltewah team that ended their season in the same round last year and clinched a berth in the Region 3-AAA tournament bracket.

And they did so without head coach Ed Clendenen on the sidelines, as he was serving the first of a two-game TSSAA suspension. Assistant coach Jay Johnson got his first opportunity as acting head coach Thursday, and his guiding McMinn to the win assured it of at least three more games this postseason – and also ensured Clendenen’s return to the bench will still happen with this team.

And that excitement translated to 14-5 start, punctuated by Parker Bebb’s first of two dunks for the night. The Cherokees ended the first quarter ahead 20-15.

However, Ooltewah (5-15) drained six 3-pointers in the first half, three of those during a stretch in which it made five straight field goals late in the second quarter. That tied the game at 34-34 before a Bebb free throw gave the Cherokees’ a 35-34 lead going into halftime.

“I told them if we come out and smack them in the mouth, they might lull it and stay in the game,” Johnson said. “But we’ve got to be able to overcome adversity and come back and punch them again.

“And at halftime, I gave them a speech and I said, ‘Look, they’re not done yet, so they’re going to come back. So we’ve got to come back out with the same intensity we had in the first half and be ready ready to punch our ticket.’ And they were ready to go. they were fired up, and they didn’t want to stay in the locker room. And I said, ‘OK guys, calmed down, we’re going to back out there.’”

The Owls took their only lead of the game, 39-38, after their seventh and final three of the evening and a transition layup. Bebb, off a Hayden Frank assist, answered with a go-ahead basket, and Ty Runyan, Davion Evans, Jalan James and Jordan Lane all followed with baskets to build McMinn’s new lead to 48-40.

Deleon Petty and AJ Hyndman brought Ooltewah back within four points, but Evens free throws and driving baskets from Lane and Daniel made up a 6-2 burst to close the quarter with the Cherokees ahead 54-46.

Chris Styles made the first basket of the fourth quarter for the Owls. But then two Frank hoops in the post, an Andrew Beavers 3-pointer, a Daniel layup off a James assist and two Runyan free throws made up an 11-0 run that put McMinn ahead 65-48, and Ooltewah never got closer than 14 points again. Bebb, who finished with a game-high 18 points, slammed home his second two-handed dunk of the evening in the last two minutes.

“But I was just glad to see everybody show up on defense, everybody whose name was called that was ready to play,” Johnson said. “Big minutes from Jordan Lane and Donovan Daniel, they gave us some great minutes, and the young guys played pretty good. I think it was overall a great team win, and I was excited about it.”

Next for the Tribe is the District 5-AAA semifinal, which it will play 7 p.m. Saturday at No. 2 seed East Hamilton, with Johnson again as acting head coach. If McMinn can upset the Hurricanes, it would earn a spot in the district championship game and a region opener at home.

A loss Saturday would put the Cherokees in the consolation round and on the road to begin region play.