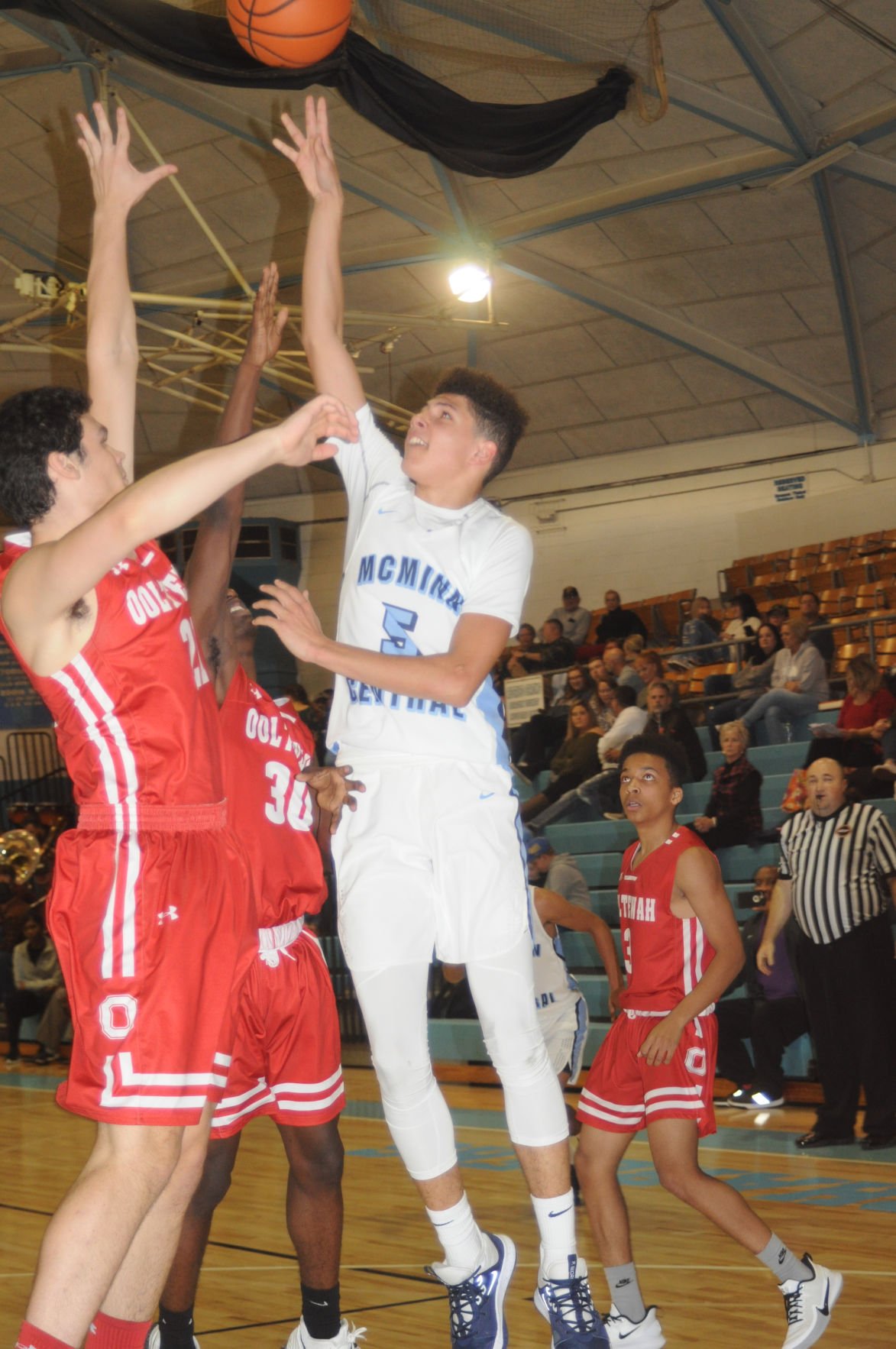 McMinn Central's Darius Carden (5) releases a floater over Ooltewah defenders Monday at The Roundhouse. Carden led the Chargers with 19 points in their 61-60 loss. 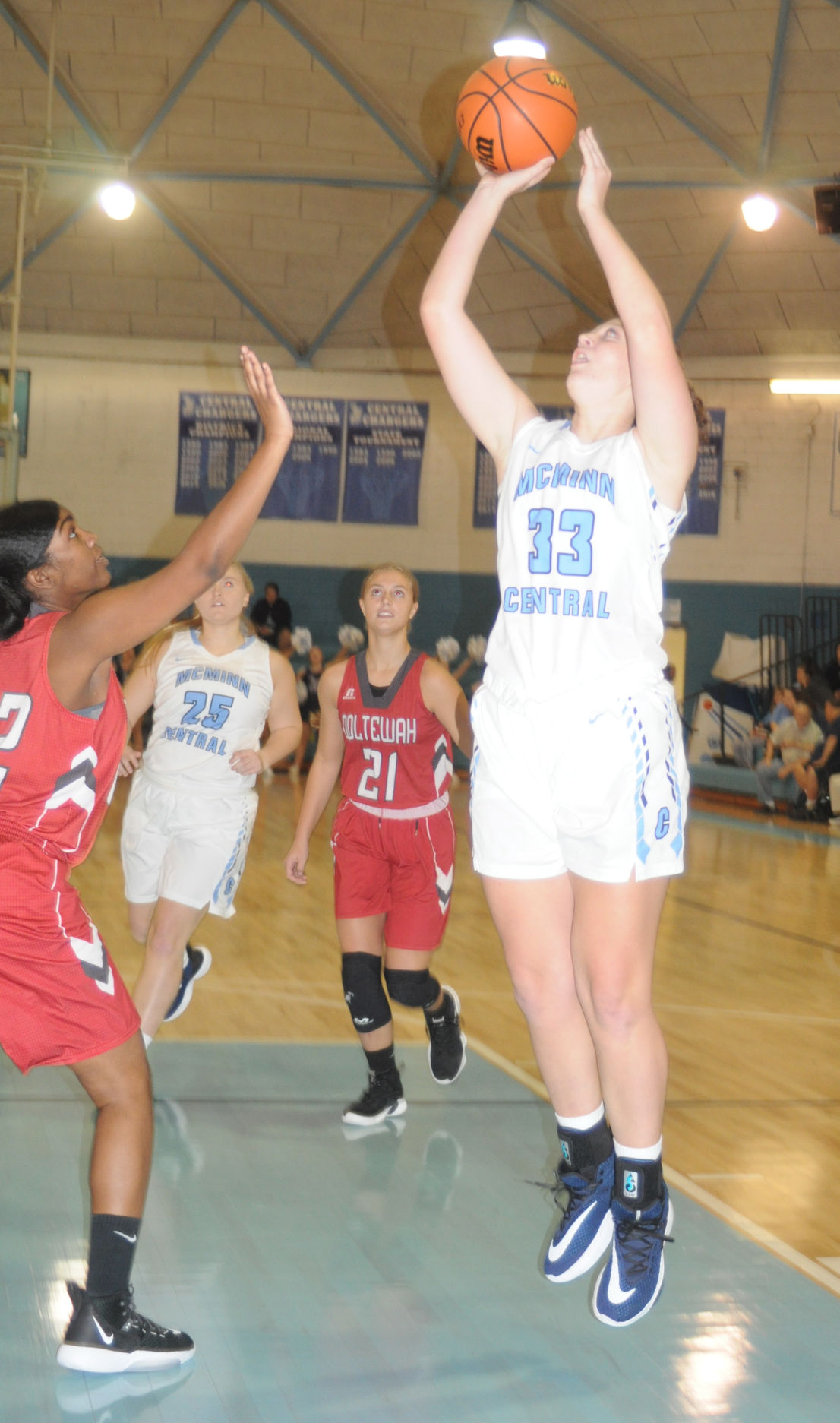 McMinn Central's Darius Carden (5) releases a floater over Ooltewah defenders Monday at The Roundhouse. Carden led the Chargers with 19 points in their 61-60 loss.

ENGLEWOOD - All the work McMinn Central's boys did to get in position to win, Ooltewah undid in one shot.

With the Chargers protecting a 60-58 lead, the Owls got the rebound of their initial tying shot attempt and kicked the ball out to Tarel McClurkin outside the arc, who buried the go-ahead 3-pointer with eight seconds left.

Caleb Foote, who had put Central ahead the possession before, had a good look at a pull-up jumper from 12 feet out for the win, but that shot bounced off the rim, sending the Chargers to a 61-60 home-opening loss Monday in The Roundhouse.

"The three, it didn't come in a traditional way," said Central boys' Coach Doug Armstrong. "Just that long rebound, and they were able to sit there and knock it down. That's one thing we couldn't let happen."

The Chargers (1-2) had fallen behind by as many as 18 points in the first half, committing 13 of their 20 turnovers before halftime, before their second-half rally. Central was 14-23 on free throw attempts.

"You could've won the basketball game right there," Armstrong said of the Chargers' free throw shooting. "And those are traits of a winning basketball team, a team that takes care of the ball and a team that knocks down free throws, and we didn't do a very good job of either tonight."

If nothing else, the Chargerettes (2-1) routing the outmatched Lady Owls yielded some positive momentum after struggling in a sloppy win at Midway and a double-digit loss at Silverdale, with more challenging opponents coming up quickly.

"Hopefully maybe some confidence in our shooting and maybe that it sunk in when I said let's have fun," said Chargerettes Coach Johnny Morgan. "Maybe it sunk in, don't worry about the mistakes. If you throw it away, it doesn't matter if you throw it away. If you live to be 150, you can't get that back, and hopefully that's sunk in a little bit. But when we shoot it relaxed, we shoot it better."

Central's homestand continues today against Gatlinburg-Pittman back in The Roundhouse, with the girls' game tipping off at 6 p.m. and the boys' game around 7:30. Then on Friday, the day after Thanksgiving, comes the clash with cross-county rival McMinn County, with the same game times in The Roundhouse.

The Chargers faced their largest deficit at 33-15 in the second quarter, but a Garrett King three-point play, Isaiah Farrar trey and six Jordan Ledford helped Central close to within 40-29 at the half.

A Farrar putback and Carden driving layup to start the third quarter set the tone for Central's comeback effort. The Chargers inched within four points three times before heading into the final period down 48-42.

"The way I expect us to play and thought we would play is the way we played in the second half," Armstrong said. "We played with a lot of energy and enthusiasm and were a well-balanced team with people stepping up and making plays. The first half we were just way too tentative and gave up way too many second shots and once again just way too many turnovers. I thought we did a good job adjusting in the second half taking care of the ball better and getting in our offense. And I thought we made some good plays on the defensive end that led to some good offense."

Ooltewah built its lead back to 52-42, but Central had one more rally left. Carden free throws, a Foote steal leading to a bucket and a Ledford steal of the Owls' inbound and the score brought the Chargers back within four points.

Carden took over with a triple, two free throws, and then finally knocking down a pull-up jumper in the lane while getting fouled, then completing the three-point play to knot the score at 56-56 with 1:59 remaining.

King and Foote gave Central the lead twice, the latter 60-58 with 52.4 seconds left, before the unfortunate rebound and Ooltewah 3-pointer took it all away.

"A lot of positives but also a lot of things we still need to correct," Armstrong said. "And like I told the guys, it's that time of the year that you try to learn from your mistakes and learn from your shortcomings. I'd rather learn from a win than from a loss, but after fighting our way back, the one thing we couldn't let happen was for them to hit a three."

Farrar finished with 13 points, including three 3-pointers. King and Ledford ended up with 12 points each. For the Owls, McClurkin's winning trey gave him the game high of 22 points, and Deleon Petty scored 21.

CHARGERETTES 77, LADY OWLS 19: Central built a 24-6 lead after one quarter and swelled the margin to 43-10 at halftime. The Chargerettes missed only five shots from the floor before the break.

Ooltewah (0-2), which was coming off a similarly lopsided 80-21 loss in its season opener against Rhea County, made only three field goals the entire game - and only one in the first half. Central forced 16 first-half turnovers from the Lady Owls despite not pressing.

"First of all, we shot it better, but that goes back to being relaxed," Morgan said. "And I just felt like the first two games, we're trying to not make mistakes. Not worried about missing shots, just worrying about the turnovers and stuff. We addressed that before we came out. I said the biggest thing, we need to play hard and have fun, and we're halfway there. We're playing hard, we're just not having fun, and I think that was the bottom line."

"Even with the opponent, we hit our open shots," Morgan said. "We might not be getting those open shots (tonight) against Gatlinburg-Pittman, or against McMinn, but we got open shots and we made them, and that was a good thing."

Gatlinburg-Pittman made the Class AA sectional round last year and the state tournament the two years before last, while Class AAA McMinn has beaten the Chargerettes three out of the last four meetings.

"We'll find out if we're getting better or not in those games," Morgan said.