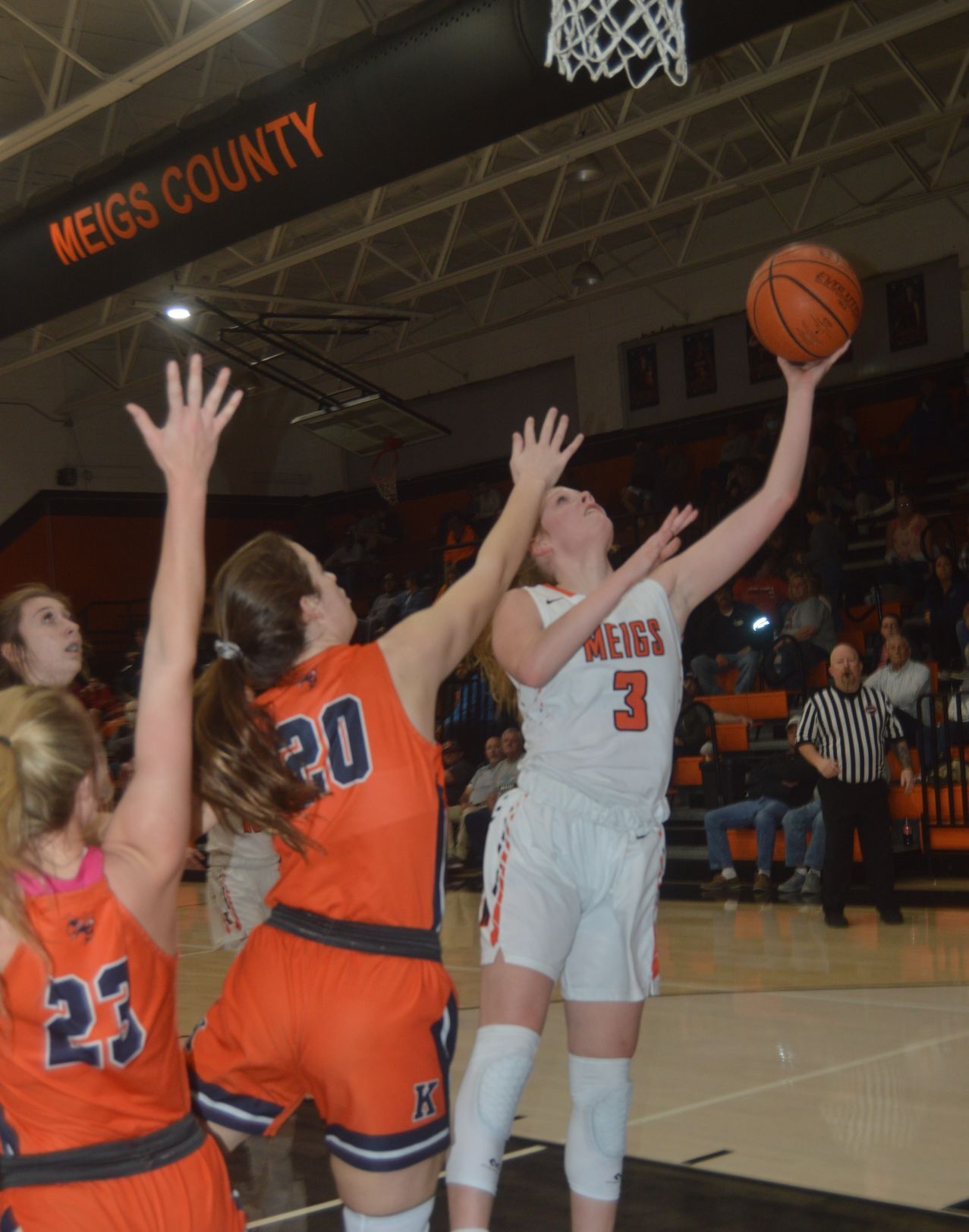 Meigs County’s Julia Howard goes up for two points during the Lady Tigers’ 66-57 win over Kingston on Tuesday. 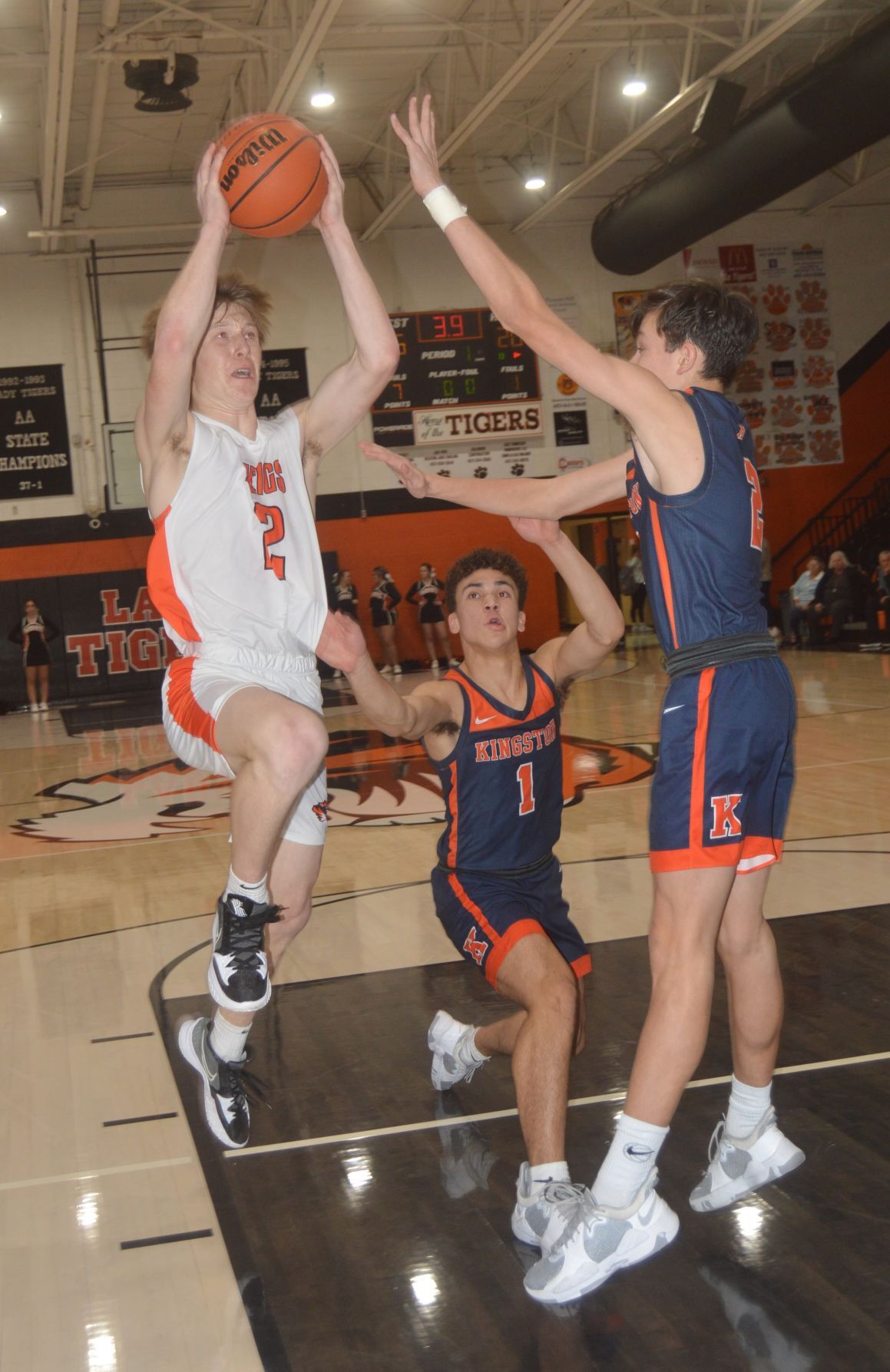 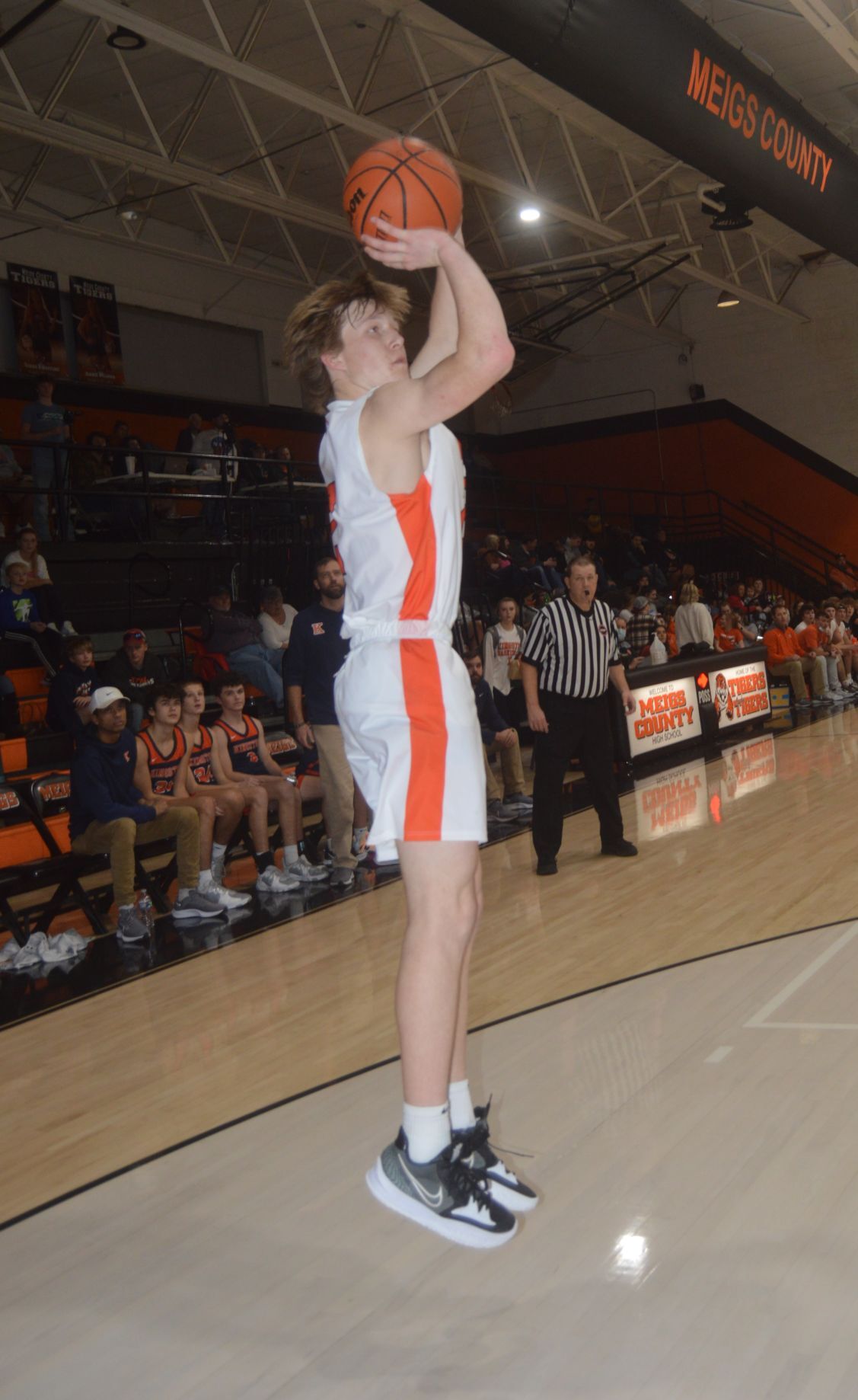 Meigs County’s Julia Howard goes up for two points during the Lady Tigers’ 66-57 win over Kingston on Tuesday.

DECATUR — Meigs County swept Kingston in a district matchup at home on Tuesday.

The Lady Tigers broke open a close game in the fourth quarter to earn a 66-57 victory while the boys stung the Yellow Jackets 58-44.

Lady Tigers Coach Derika Jenkins said it was a good win in which everyone contributed.

“We didn’t come out with the energy, I thought, that we needed,” Jenkins said. “But as the game went along I think we settled down and played better. Mattie Moore had a really good game for us but everyone did their part to help us win. It was a good team win and that’s what I like.”

After a couple of what he thought were some lackluster games around the holidays, Tigers Coach Sammy Perkinson was much happier with his team’s performance on Tuesday.

“It was a good win for us,” Perkinson said. “I think we played our best game in the last couple of weeks. We passed the ball, we moved, we did a good job of rebounding and we made our shots. I thought we did a good job on (Colby) Raymer. Holding him to 28 is pretty good, he’s a really good player. You want to win your home games in the district and we were able to do that.”

In a schedule change, the postponed Sweetwater game will now be played on Wednesday, Jan. 19 with the games at 5 and 6:30 p.m.

Lady Tigers 66, Lady Yellow Jackets 57: Kingston had a 16-15 lead near the end of the opening quarter, but Talley Lawson made a layup at the buzzer to put the Lady Tigers ahead 17-16 going to the second period.

Moore started Meigs’ second quarter scoring with a trey and then came buckets by Julia Howard and Moore and then another three pointer by Moore. That put Meigs ahead 27-21 with five minutes left in the quarter.

The Lady Tigers outscored Kingston 12-8 for the rest of the quarter with Moore draining another trey and Cayden Hennessee, Lawson and Lila Brown all scoring for Meigs.

Kingston rallied in the third quarter after falling behind 45-33 after Moore’s fourth three pointer of the night.

Kingston responded with a pair of threes and later trailed only 48-46 going to the fourth quarter.

The Lady Tigers’ defense, however, took over and held Kingston scoreless until 1:21 left in the game at which point Meigs had opened up a 57-48 lead.

The Lady Yellow Jackets later made it 62-57, but there were only seven seconds left by then and Meigs hit its free throws down the stretch to earn the 66-57 win.

Moore led the Lady Tigers with 18 points and Lawson finished with 14 points. Also finishing in double figures was Howard with 10 points.

Tigers 73, Yellow Jackets 55: Kingston started strong and led 12-3 early, but buckets and free throws by Ethan Meadows, Cole Owens and Matthew Boshears made it a two point game with Kingston up 12-10.

After a three pointer by the Yellow Jackets, back-to-back three-point plays by Jackson Shaver and Payton Armour gave Meigs its first lead at 16-15. Two free throws by Armour, a bucket by Boshears and a field goal by Armour gave Meigs a 22-15 lead going to the second quarter.

Meigs later was ahead 31-24 and buckets by Levi Caldwell, Boshears and Meadows gave Meigs a 37-26 halftime lead.

The Tigers continued to maintain a solid lead with Owens hitting a pair of third-quarter threes along with scoring from Boshears, Meadows, Shaver and Da’Quawn Tatum. Meigs led 58-44 going to the fourth.

Kingston got the deficit down to 62-50, but never got any closer than that as Meigs cruised to a 73-55 win.

Armour led the Tigers with 18 points and Meadows finished with 16. Boshears chipped in with 10.