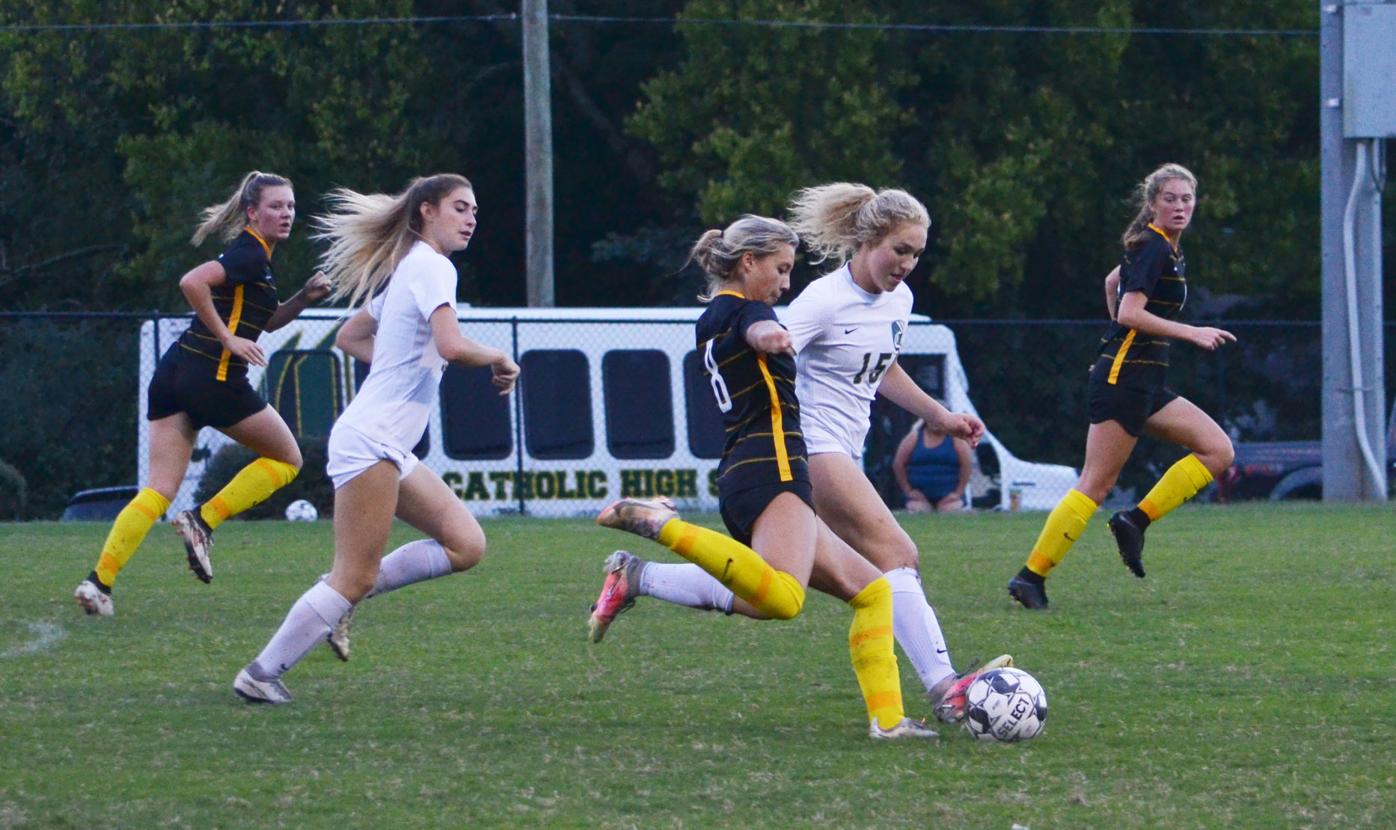 McMinn County’s Kylee Hockman (8) prepares to send the ball downfield against Knoxville Catholic on Tuesday at the McMinn County Soccer Complex. Teammates Lexi Lawson (left) and Allison Hansford look on at the play. Hockman scored two goals and Lawson one, and Hansford recorded two assists as the Lady Cherokees and Lady Irish tied 3-3. 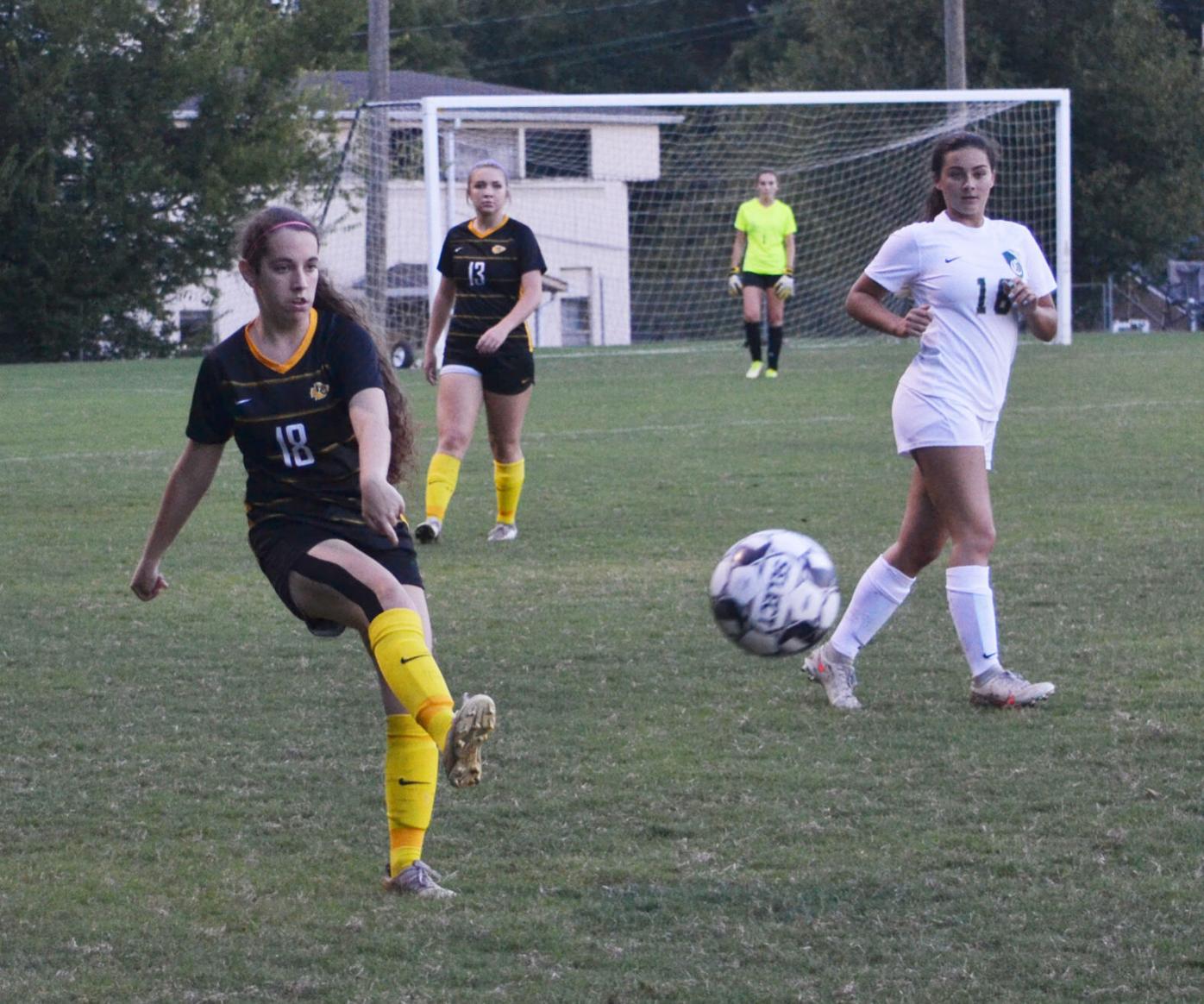 McMinn County’s Kylee Hockman (8) prepares to send the ball downfield against Knoxville Catholic on Tuesday at the McMinn County Soccer Complex. Teammates Lexi Lawson (left) and Allison Hansford look on at the play. Hockman scored two goals and Lawson one, and Hansford recorded two assists as the Lady Cherokees and Lady Irish tied 3-3.

There were a few tears and frustrated groans from McMinn County after its latest soccer game against a high-caliber opponent.

The Lady Cherokees were not satisfied with the 3-3 draw they preserved against Knoxville Catholic on Tuesday at the McMinn County Soccer Complex. Not when they held a 3-1 lead at halftime and still had chances at a winning goal in the waning minutes.

And it’s the kind of attitude coach Jordan Jacob welcomed from the Lady Tribe (8-2-1) as it plays through its closing stretch of the regular season.

“It’s a great result for us, no doubt, but I know the girls are leaving here a little disappointed that we didn’t go out and win the game,” Jacob said. “Because I feel like there at the end with their emotions and how they are feeling, they kind of acted like we had lost the game. We didn’t win it either, but it is a good result. But I like that their emotions are still not satisfied with that result, that they want to win that game. I think it’s a real positive for us.”

Catholic (3-2-3) came into Athens with a resumé that included a rain-shortened scoreless tie against nationally ranked Bearden, a three-goal win over a Chattanooga Christian team that beat Farragut and a two-goal loss to perennial power Houston.

That was the kind of team McMinn dominated for much of the first half, even with standout midfielder and Lee commit Addie Smith, who had been battling through injury the last couple of weeks, held out of Tuesday’s game as a precaution.

Lexi Lawson put the Lady Cherokees on the board first in the 17th minute, finishing after a long ball into the Lady Irish’s 18-yard box. Sydney Clements evened the score for the Lady Irish in the 21st minute, taking advantage of an empty goal.

But two minutes later, Allison Hansford dished a pass to Kylee Hockman as she collided with a Catholic defender, and Hockman sent a ball to the top right corner of the goal to put McMinn back ahead 2-1. Hockman struck again in the 31st minute, splitting two Lady Irish defenders and taking a Hansford through ball in stride and slotting a ground shot past the keeper to make it 3-1.

“We did a great job. I think early on to start the game, probably the first five to 10 minutes or so, we were on our heels a little bit,” Jacob said. “That happens when you have four days off here, just with weather yesterday and taking the weekend, things like that. We haven’t done anything since last Thursday. So we took a few minutes to figure it out, but once we got going, we were just our normal selves, generating chances and then scoring chances.”

But it was the Lady Irish on the attack in the second half. They put three shots on goal in the first five minutes of the half, and Clements finished on a through ball eight minutes after halftime to cut McMinn’s lead to 3-2.

Catholic’s Ceci Pumariega then hit a 30-yard direct free kick too high for McMinn keeper Bella Hooper to reach to tie the game with 25 minutes remaining.

At that point, Jacob was reminded of the Lady Cherokees’ game last year at Catholic, in which they led 3-2 midway through the second half before falling 5-3. But this time, McMinn prevented the Lady Irish from scoring a go-ahead goal even as its defense continued to withstand pressure.

“They scored two pretty quick, and I was like, ‘Well, here we go again,’” Jacob said. “Kind of the same deal. But credit to the girls for really digging in and defending very well. That does say a lot, because they pushed numbers forward and they were really pushing to win this game.”

The Lady Tribe even had some opportunities to regain the lead in the last 20 minutes, with Hansford breaking away from her defender on the dribble twice into one-on-one situations against Catholic’s keeper – but the keeper thwarted both threats. McMinn also had a free kick in the attacking third that came up empty.

Catholic finished with a 29-15 overall shot advantage, 17-8 on goal. The shot differential was more lopsided in the second half, with the Lady Irish outshooting McMinn 17-6 overall and 10-4 on goal. Hooper finished with 14 saves in goal for the Lady Tribe.

“And even within that we handled all of the pressure they put on us, and we even created some good chances to go on and win the game,” Jacob said. “You don’t score them all, and that’s OK, but they did a really good job.”

McMinn added a game against another private school, Boyd-Buchanan from Chattanooga, to the schedule for a 5 p.m. kickoff Thursday. That game is tentatively set to be played at the McMinn County Soccer Complex, but forecasted rain could move that game to Boyd-Buchanan, which has a turf field.