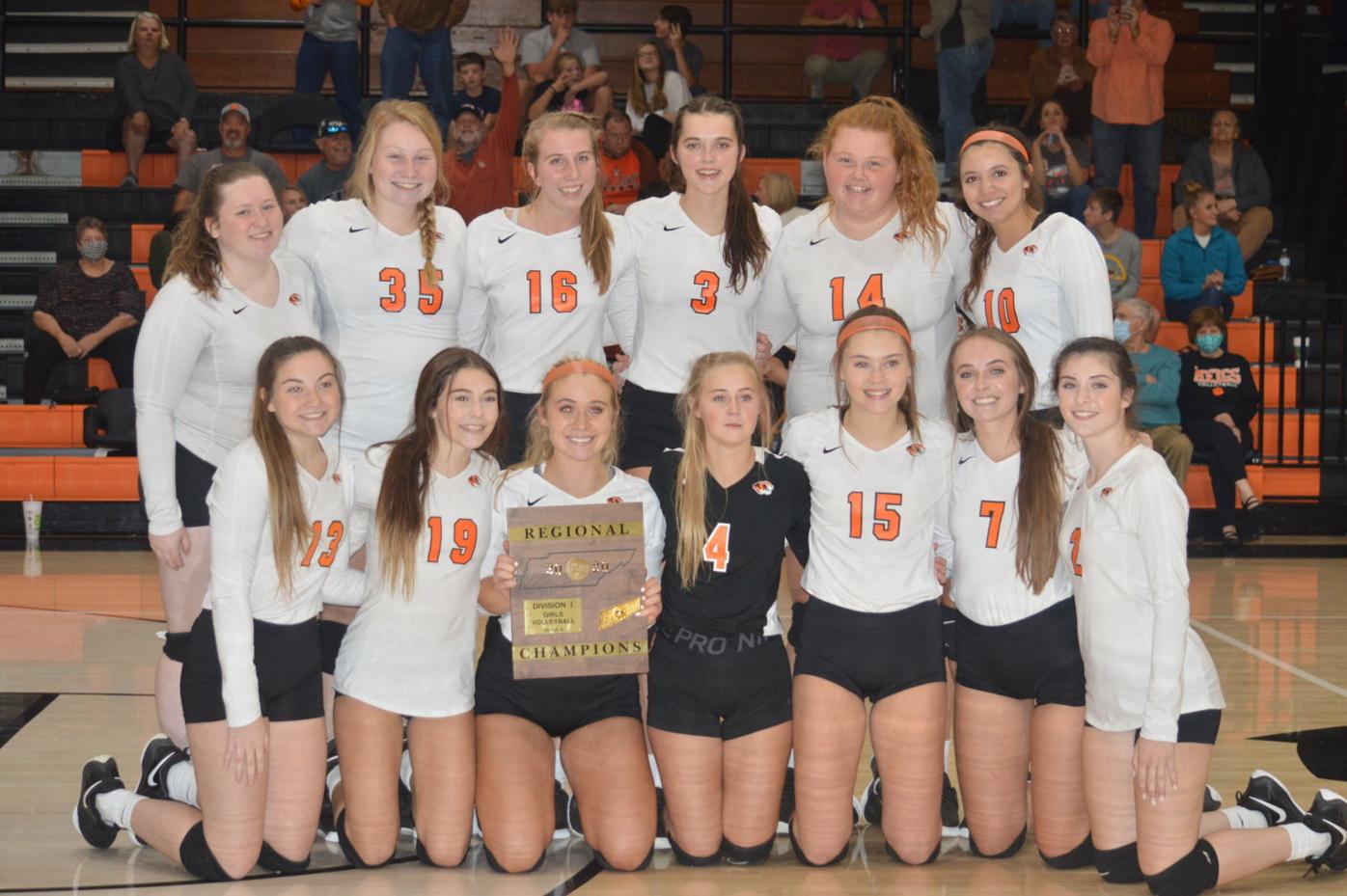 The Meigs County Lady Tigers are the Region 2-A champions after defeating Van Buren in four sets Tuesday night. Meigs will host a Substate match on Thursday at 7 p.m. with the winner going to the state tournament. 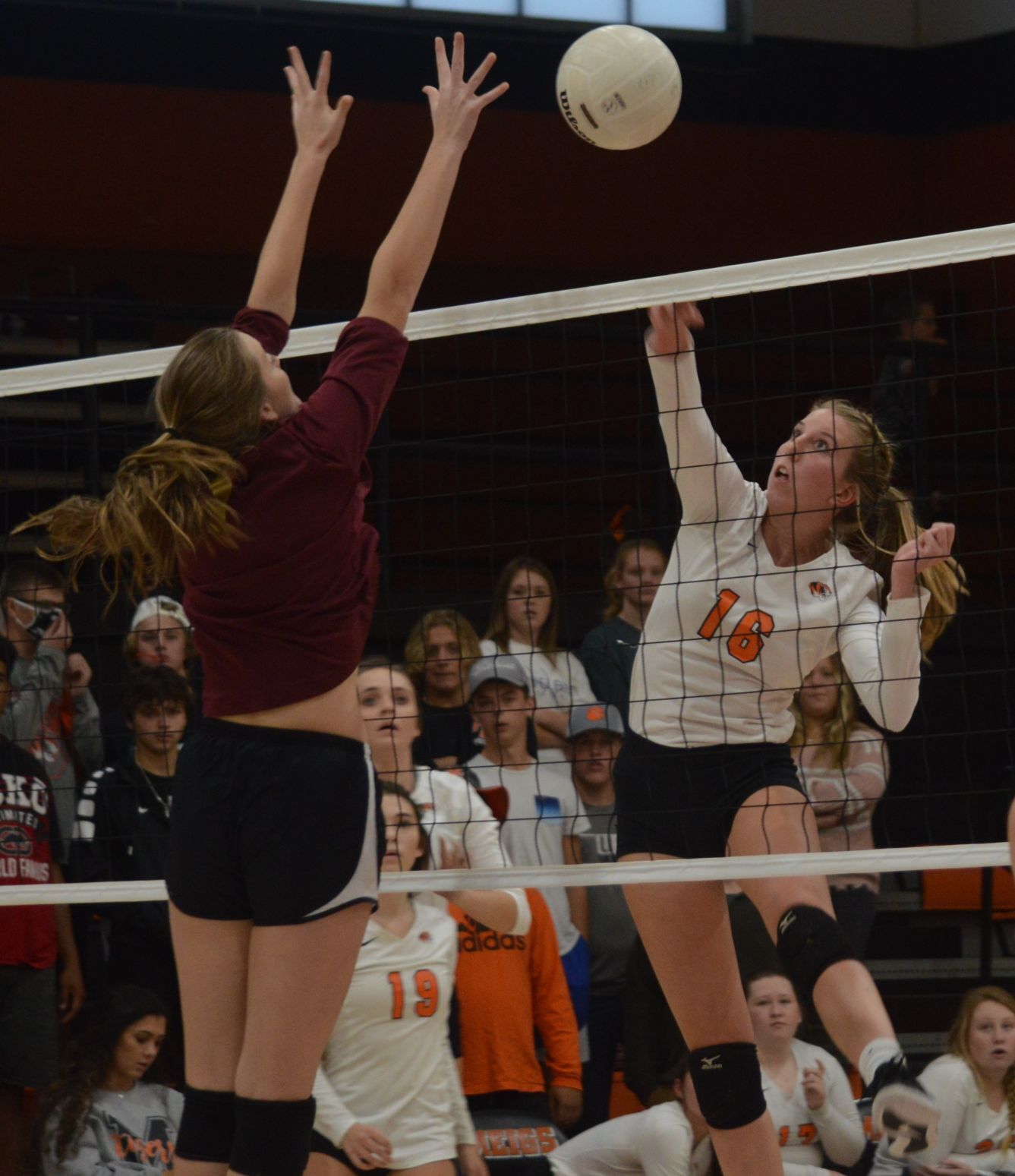 Region 2-A Tournament MVP Ella Scott blasts a spike past a Van Buren defender. Meigs won in four sets and will host a Substate match on Thursday. 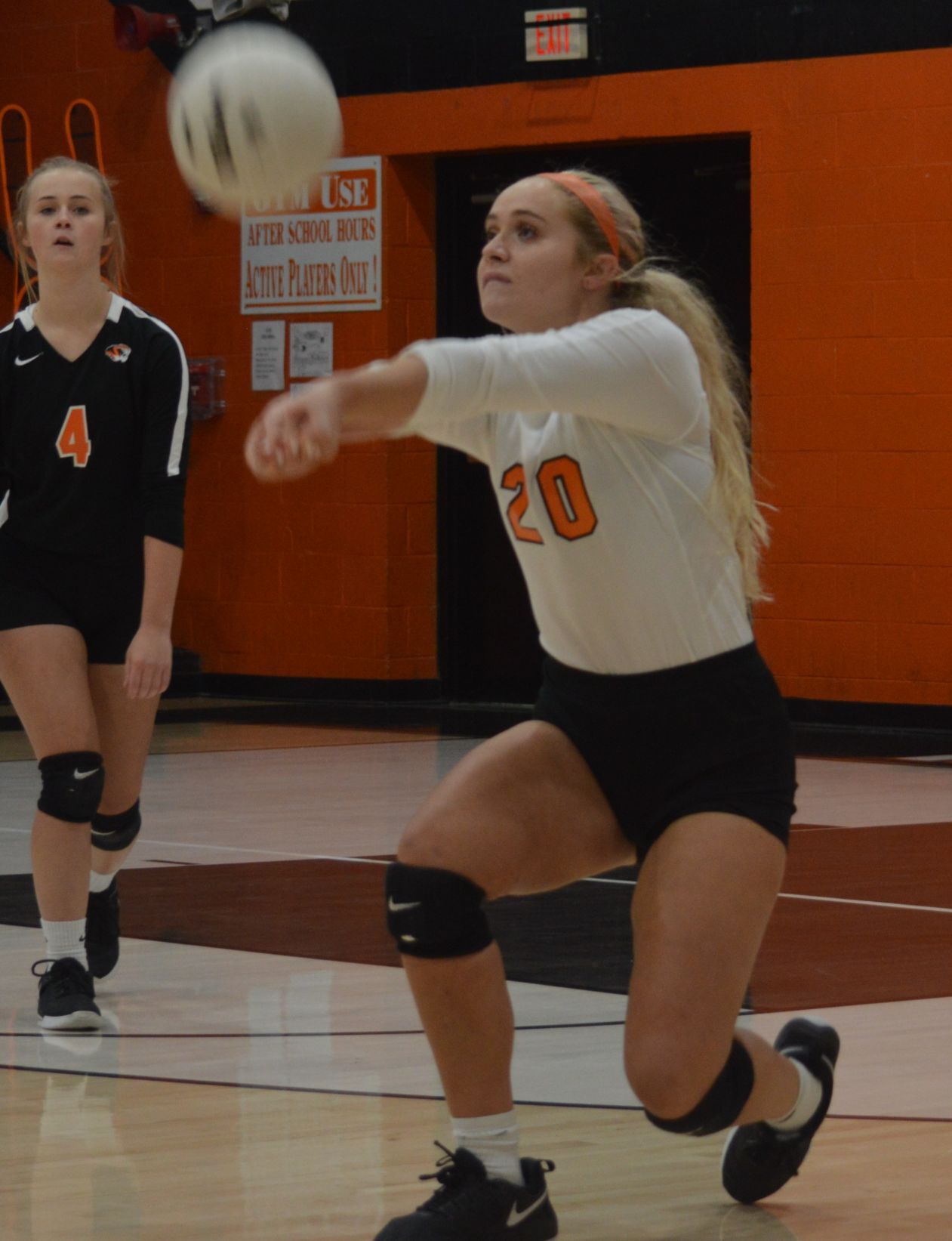 The Meigs County Lady Tigers are the Region 2-A champions after defeating Van Buren in four sets Tuesday night. Meigs will host a Substate match on Thursday at 7 p.m. with the winner going to the state tournament.

Region 2-A Tournament MVP Ella Scott blasts a spike past a Van Buren defender. Meigs won in four sets and will host a Substate match on Thursday.

DECATUR — The Lady Tigers are one win away from going to the state volleyball tournament.

Meigs County won the Region 2A championship with a four-set victory against Van Buren, winning 22-25, 25-21, 25-18, 25-17. A vocal fan base cheered on the Lady Tigers volleyball squad to a region title and substate berth in just the team’s third year of existence. The win also keeps Meigs’ home win streak intact as the Lady Tigers have lost just one home game in three years.

Van Buren defeated Meigs in last year’s region championship so the Lady Tigers knew it would be a tough test. But Swafford said her players just had to play the way they have all year – and hit the ball where Van Buren wasn’t.

“It doesn’t matter who is across the net, we just have to play our game,” Swafford said. “We know we have to cover, set it up and then hit away. We had to find the holes in the court and we found them. That’s the game we play. We knew if we could just keep with them that we would have a chance. They believed in it and went after it.”

Meigs will host the substate on Thursday at 7 p.m. against the runner up from Region 1A, which includes teams such as Cosby, South Greene, North Greene and Gatlinburg Pittman.

The Region 2A MVP is senior Ella Scott. Van Buren had one player at the net that hurt Meigs at times, but the play of Scott and Meigs’ other net players helped keep her in check.

“I think she got one swing (at the ball) the entire last set, we shut her down,” Swafford said. “Ella Scott the second half of the season has come alive. Incredible play by her. She knew her role on the team and she played it to a T.”

To say Scott was thrilled with being named the MVP is an understatement, but she’s even happier that Meigs is hosting a substate match with a chance to go to the state tournament.

“I’m so excited, I’m glad we won today,” Scott said. “We knew that they would be really good and that it would be like us playing us, almost. So we practiced before the game (today) and it paid off. I was jumped up, I was so excited (after being named the MVP). My entire team hyped me up the entire time. I’m so happy. It’s so exciting.”

The first set was possibly the most competitive set all year long as neither team gained more than a three-point advantage the entire set.

As it did in every set in the match, Meigs started off falling behind 1-0 but was able to keep up and the two teams traded leads. Meigs led 10-8 with Miller, Scott and Ella Crowder earning points at the net.

Meigs later had a 14-12 advantage after a kill by Ella Crowder and a block by Scott.

The Lady Eagles, however, were able to edge ahead from that point on and won the first set 25-22.

The second set was important as the Lady Tigers didn’t want to fall behind by two sets. After again giving up the first point, Meigs took a 4-1 lead on two kills and a block by Miller.

Then Scott had a stretch where she had two kills and two blocks. That, along with a pair of blocks and a kill by Miller and a kill by Ella Crowder put Meigs on top 18-13.

Van Buren was able to rally and Meigs led just 23-21 but a block by Scott and an ace by Stone sealed the set for Meigs as the Lady Tigers won 25-21.

Unlike the previous two sets, Meigs controlled the third set, although it didn’t start out that way.

The Lady Eagles led 5-1 early, but then two kills and a good serve by Anna Crowder made it 5-4. Meigs later tied the set at 6-6 and then 7-7. Stone earned a point for Meigs on a good serve as did Anna Crowder and then Scott came up with another block to give Meigs a 10-7 lead.

Meigs took control of the match from there with Scott, Ansley Wade and Miller controlling the net and Stone firing off several good serves. Meigs led 20-10 before Van Buren rallied to make it 22-18.

Three straight kills by Scott, Ella Crowder and then another by Scott gave Meigs the 25-18 win.

The fourth set went much like the third, with the Lady Tigers taking control early and then holding off a Van Buren rally.

Meigs led 8-3 early and then went on a 5-1 run on a kill and two blocks by Scott and then another kill by Scott and one by Wade. Anna Crowder served for three of those points.

A block by Scott gave Meigs a 14-5 lead and Meigs later held a 17-9 advantage before the Lady Eagles charged back. Meigs’ lead shrunk to 19-13 before kills by Scott and Miller made it 21-13. Meigs later led 24-17 and a kill by Miller gave the Lady Tigers the 25-17 fourth set win and a Region 2-A championship.