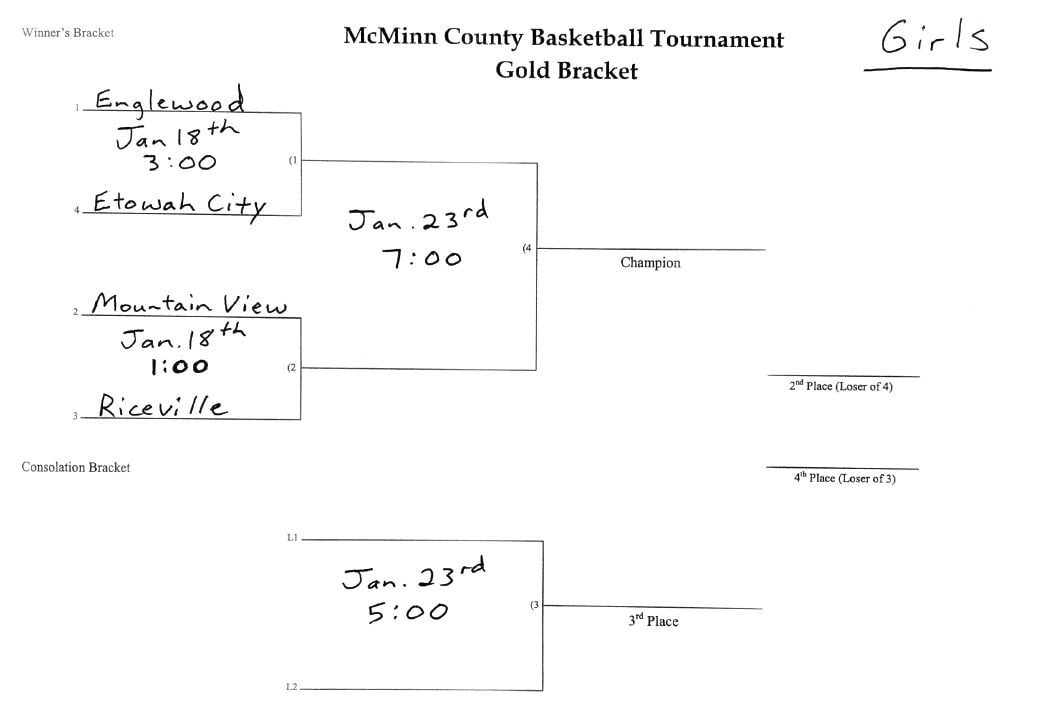 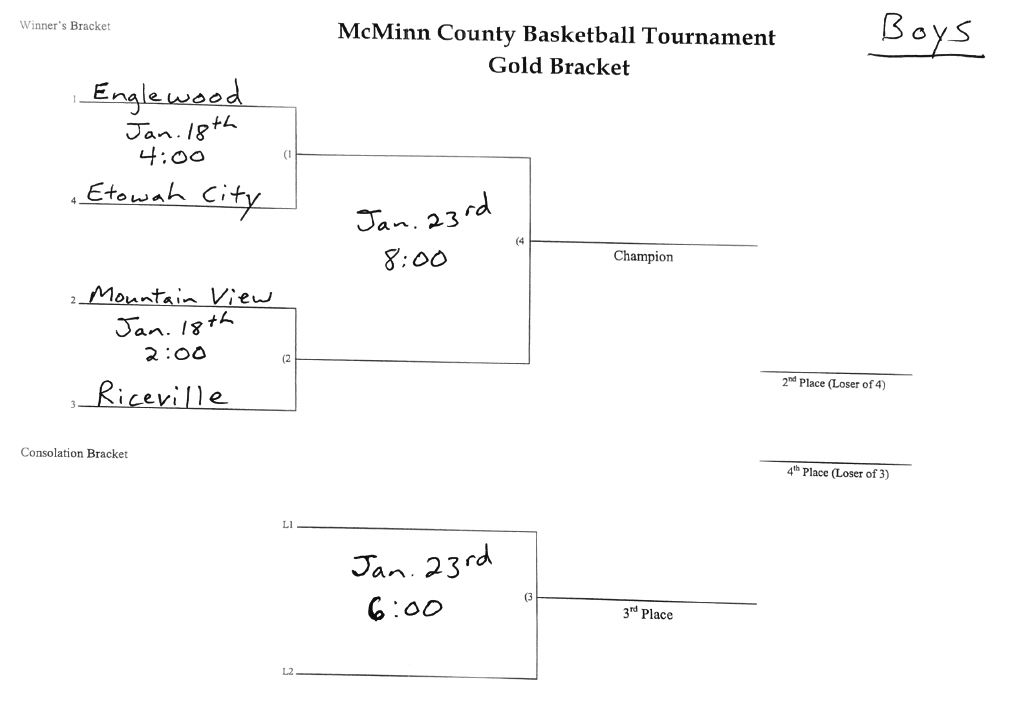 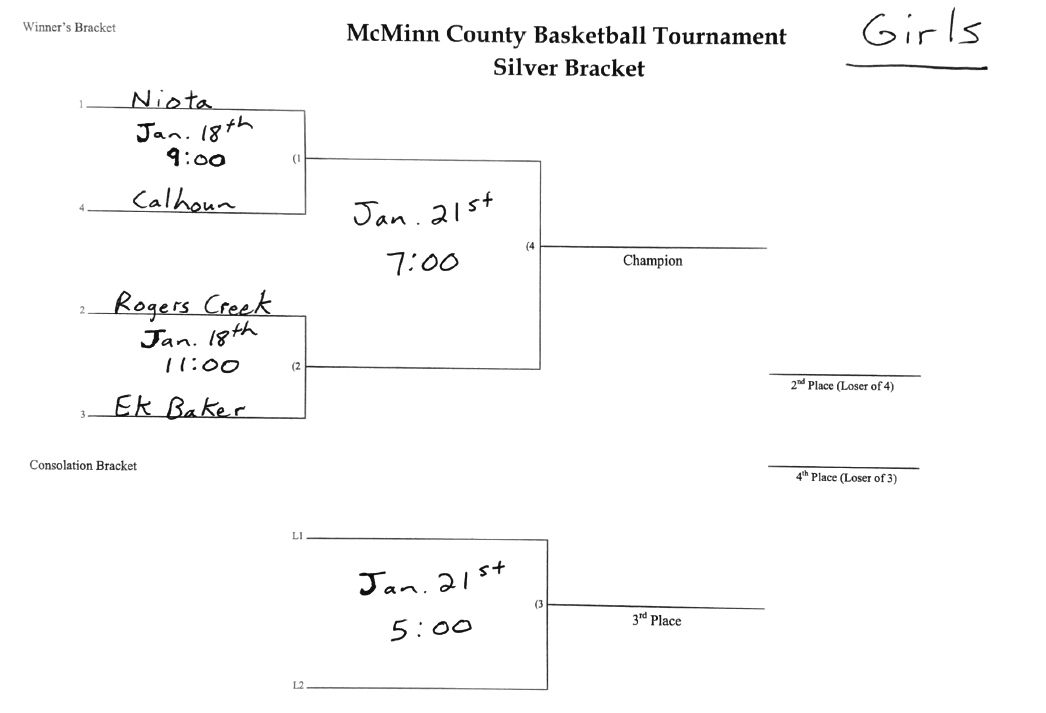 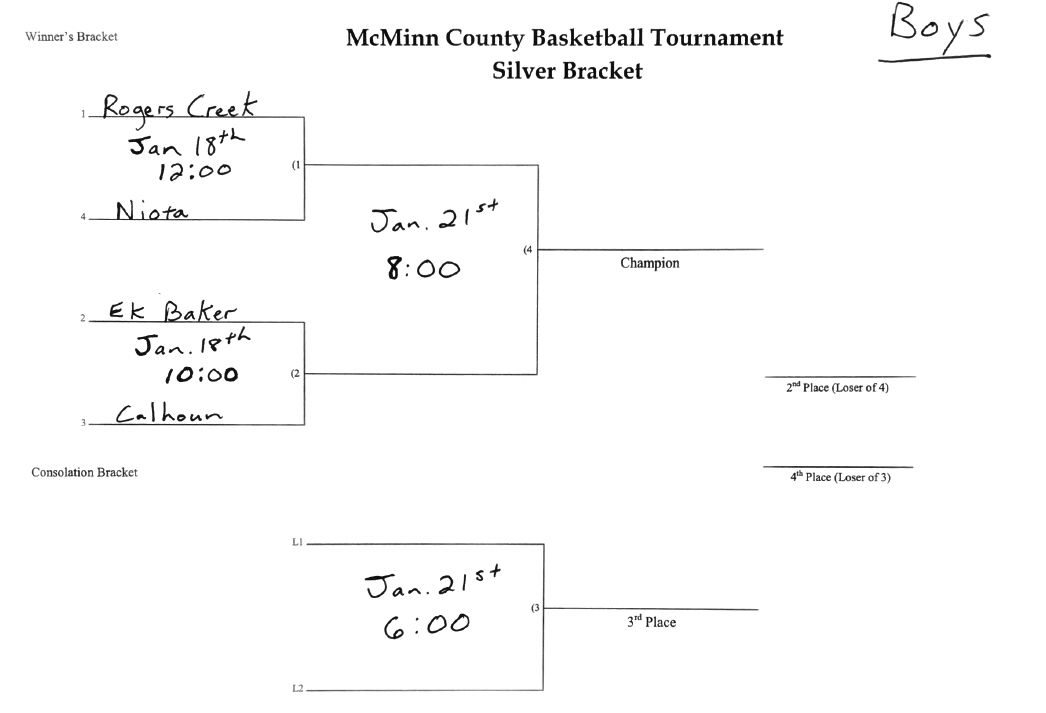 ENGLEWOOD – The McMinn County Elementary Basketball Tournament is taking on a different look this year – with a lot more at stake than simply county bragging rights.

The tournament is now part of the postseason for Tennessee Middle School Athletics Association (TMSAA) basketball, as all seven McMinn County elementary schools and Etowah City School joined the TMSAA starting this season.

That means the event, which begins 9 a.m. Saturday in The Roundhouse of McMinn Central High School, now doubles as the tournament for Area 10 of Class A in the TMSAA. All eight participating schools – Riceville, Niota, Rogers Creek, E.K. Baker, Calhoun, Englewood, Mountain View and Etowah City School – are the members of Area 10-A.

The big change to the tournament's format is that it is no longer divided into the Large School and Small School divisions. Instead, it is split into the Gold Bracket and the Silver Bracket.

The teams were seeded and placed into the two brackets based on their results from the first time they played the other schools in Area 10-A during the regular season. The top four teams based on those results are in the Gold Bracket and the bottom four in the Silver Bracket.

The top three finishers in the tournament’s Gold Bracket will advance to the Section 2-A tournament, which will begin Feb. 1 at Harriman High School. The Silver Bracket essentially serves as the county tourney’s consolation bracket.

“That was the only way we could be fair to the small schools, because sometimes the small schools might have somebody that might be – usually not the best team but sometimes they’ll have the second- or third-best team,” Puryear said. “And there has been a few years where a (small school) girls’ team might even be the best team. But to give them a chance to continue on to the sectional tournament, we decided to do it that way.”

To that point, Etowah City, which was in the county tournament’s small school division in past years, had both its boys’ and girls’ teams make it into the Gold Bracket this season based on their results against the other schools in the county. Englewood, Riceville and Mountain View also have both of their basketball teams in this year’s Gold Bracket.

The Silver Brackets for both boys and girls this year are Rogers Creek, Niota, Calhoun and E.K. Baker.

The other change is that for the first time since the 2011-2012 school year, the tournament is taking place after the holiday break instead of before – thus ensuring the sectional qualifiers don’t have such a long layoff between the area tournament and the sectional.

“In the past, we had gotten our season over with before Christmas,” Puryear said. “But since the sectional is Feb. 1, we didn’t want our teams, even if they qualified before Christmas, to go three weeks without playing games before they went over to the (sectional) tournament.”

Puryear said the smaller schools preferred to keep an upper and lower bracket, as opposed to the possibility of combining the county tournament into one eight-team bracket.

“The small schools liked having the Small School and Large School bracket before they felt like they could actually compete to win something,” Puryear said. “Where in reality, most times, you would have the eight-seed playing the one-seed, so you would have games that would end up like 75-10, real lopsided scores.

Puryear acknowledged there could be years in the future in which the fourth- and fifth-ranked teams in the area could be close in quality with each other, to the point that the No. 5 seed could be good enough to beat the No. 4 and even compete with the county’s top three for a sectional berth.

In this year’s tournament format, the fifth team in the standings has no chance at a sectional berth, as it would be relegated to the Silver Bracket.

“There’s always what-ifs in these things, but we met as coaches and principals and determined that we felt like this as the best way to go about it in order to have more competitive games in the tournament and to send on the three teams that we feel like would best represent our best teams,” Puryear said.

At least this year, Englewood, Riceville and Mountain View looked to have the clear top three boys’ and girls’ teams, with all of them having swept fourth-seeded Etowah City in the regular season – but Puryear hasn’t ruled out revisiting the tournament format in future years.

“It’s something that we can change and adjust in the future,” Puryear said. “But for this year, just getting started, we felt like we just wanted to send our best three teams. And we wanted to reward the regular season.”