The McMinn County Lady Cherokees celebrate their fourth straight District 5-AAA championship after a 5-0 win over Rhea County on Thursday at the McMinn County Soccer Complex. 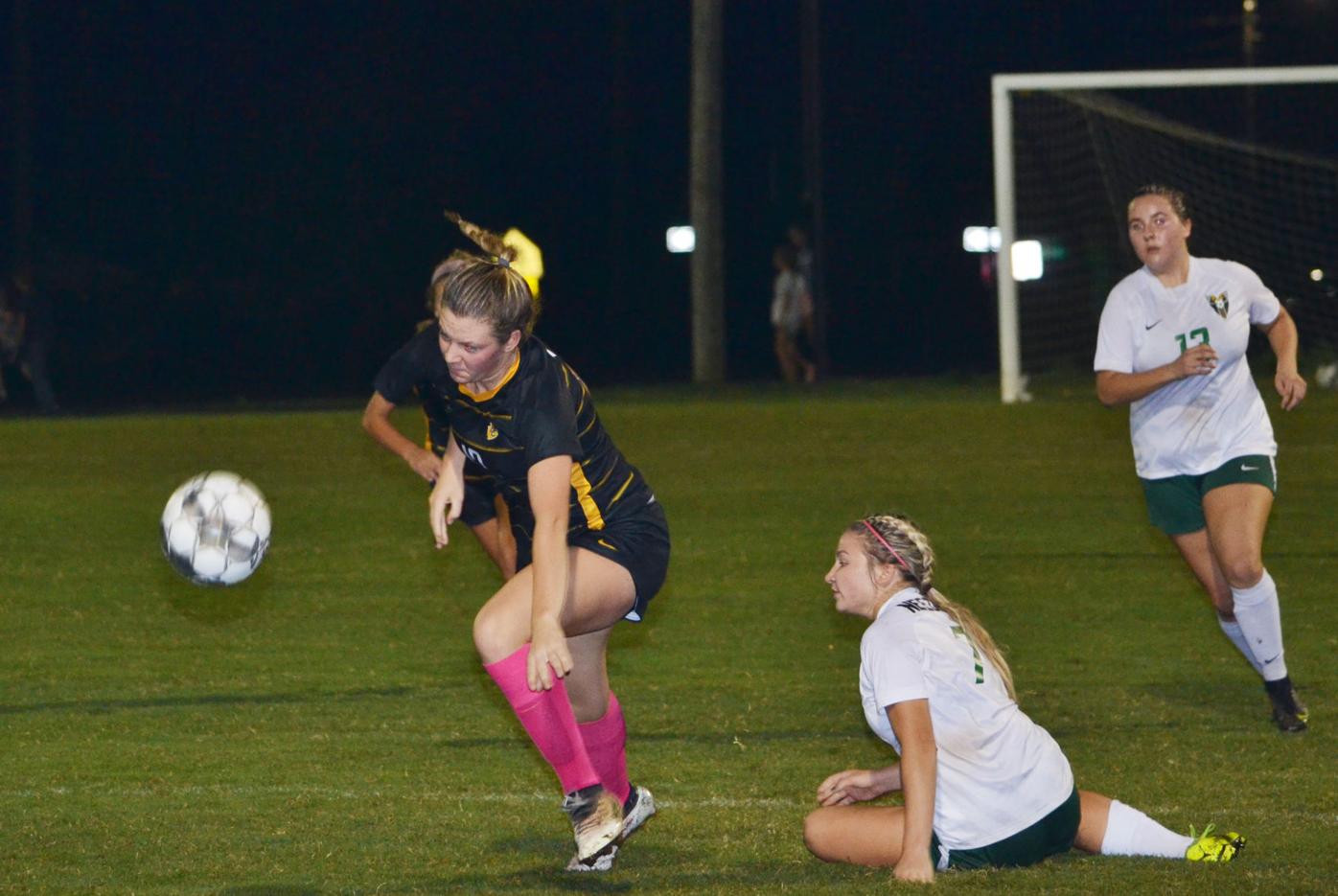 McMinn County’s Lexi Lawson (left) keeps her balance after contact with a Rhea County defender and chases a loose ball during the Lady Cherokees’ 5-0 win in the District 5-AAA championship game Thursday at the McMinn County Soccer Complex. Lawson recorded one goal and one assist. 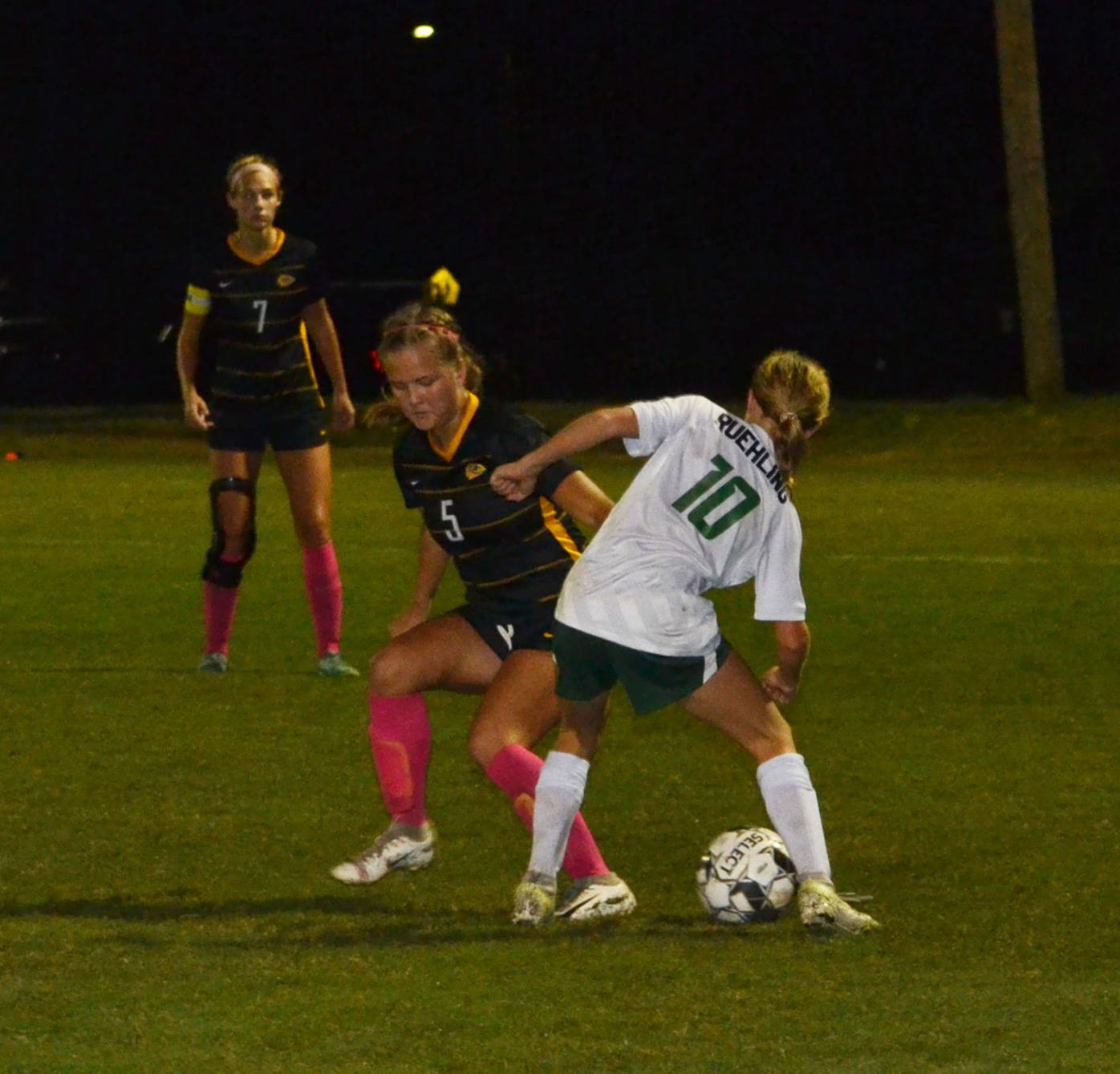 McMinn County defender Kendall Heath (5) gets a stop against a Rhea County attacker during the Lady Cherokees’ 5-0 win in the District 5-AAA championship game Thursday. 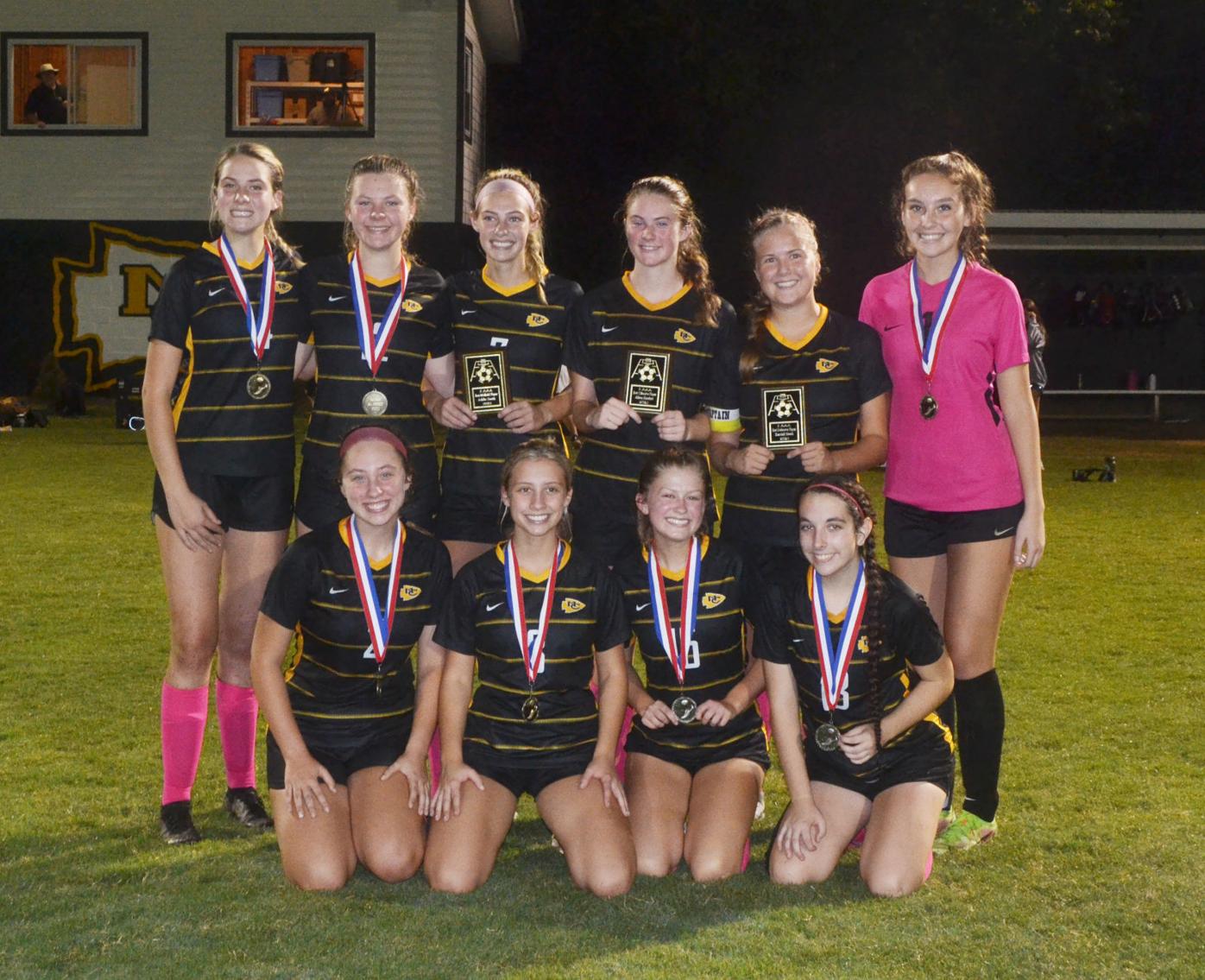 The McMinn County Lady Cherokees celebrate their fourth straight District 5-AAA championship after a 5-0 win over Rhea County on Thursday at the McMinn County Soccer Complex.

McMinn County’s Lexi Lawson (left) keeps her balance after contact with a Rhea County defender and chases a loose ball during the Lady Cherokees’ 5-0 win in the District 5-AAA championship game Thursday at the McMinn County Soccer Complex. Lawson recorded one goal and one assist.

McMinn County defender Kendall Heath (5) gets a stop against a Rhea County attacker during the Lady Cherokees’ 5-0 win in the District 5-AAA championship game Thursday.

Coach Jordan Jacob figured the District 5-AAA championship game could turn based on who would score the first goal of the second half.

McMinn County answered that question in the first minute after halftime, with Allison Hansford winning a throw-in on the sideline and flicking a pass to a trailing Addie Smith. Smith dribbled to the center of the field and arced the 25-yard shot perfectly over the Rhea County keeper’s hands into the goal.

Smith’s score 34 seconds into the second half opened up a barrage of four goals in 15 minutes, turning the Lady Cherokees’ 1-0 halftime lead into a 5-0 romp to their fourth consecutive district title on Thursday at the McMinn County Soccer Complex.

“You could just see it in their demeanor. Everybody felt like, ‘Alright, we’re good,’ and they just started to play a little more free,” Jacob said of the second half. “And that was one of our biggest talking points at halftime, that it was important we score the next goal because we know what happens if they were to score and equalize. The game was really going to change, so it was very important for us to score and to score as early as we could. And to score inside the first minute of the second half was big for us.”

The senior class of Hansford, Smith, Kendall Heath and Anna Brown will graduate a perfect four-for-four on district championships. The Lady Tribe have won six of the last nine District 5-AAA crowns.

“To hold that consistency over the course of four years is hard,” Jacob said. “It’s not easy. It takes hard work every year. That’s a credit to all the girls who have come through our program the last few years of upholding that standard and then our seniors this year of maintaining that as well. I couldn’t be more proud.”

McMinn (12-2-1) was on the attack from the start, out-shooting Rhea 20-4 overall and 7-2 on goal in the first half alone, but it took more than 32 minutes to pay off. A couple of good looks at the goal hit the post and the first six on frame met the hands of the Lady Eagles’ goalkeeper Michaela Reeves.

Hansford finally put the Lady Cherokees on board at 7:36 before halftime, breaking up the middle of the field while receiving a through ball from Mackenzie Howard in stride and finishing on the run.

“I don’t know if tense is the right word, but we definitely felt maybe frustrated just because we were creating chances and didn’t score,” Jacob said. “So maybe frustrated, but credit to their goalkeeper, she made some really good saves. And that’s just part of it. And when we played there during the regular season, it was kind of the same way, the score line was the same, but it always felt much closer than it was. But eventually we broke through and everybody took a deep breath and were like, ‘We’re all right.’”

They were even more all right after Smith struck right after halftime to make the score 2-0. Hansford nudged in her second score in the second half’s seventh minute off a Smith corner kick. Four minutes later, Smith made it a brace of her own booting in a loose ball from Lexi Lawson’s corner kick to make it 4-0.

Lawson got on board herself with 24:55 left, finishing point-blank in front of the goal after Hansford crossed the ball from the left wing. The Lady Cherokees finished the match with a 34-8 overall shot advantage and 15-5 on goal and attempted nine corner kicks to two for Rhea (11-5-3).

By winning the district title, McMinn will host its Region 3-AAA opener Tuesday back at the McMinn County Soccer Complex. Kickoff time is still to be determined.

McMinn will open Region 3-AAA play Tuesday back home at the McMinn County Soccer Complex against Warren County (14-5), who finished as the District 6-AAA runner-up after a 4-1 loss to Franklin County in that district’s title game the same night. Tuesday’s game will be a rematch of last year’s region opener.

Should McMinn win Tuesday, a potential rematch of last season’s Class AAA sectional game with Franklin County (10-4) could await for the region title.

“The times we played both of them last postseason, they were tight games, so I would expect more of the same,” said Jacob, with the Lady Cherokees still awaiting the opposite district’s result at the time. “But we’ve played tough teams, we’ve been tested, and I think the girls are ready. And we’ll be back on a regular schedule next week, we’ll be back in school, so hopefully that will help things out as well.”

ANOTHER RECORD FOR HANSFORD: Hansford’s two assists Thursday lifted the Liberty commit to the career program record for assists with 58 and counting. The previous record was 56 by Taylor Van Wagner (2007-2010), who went on to play at Austin Peay.