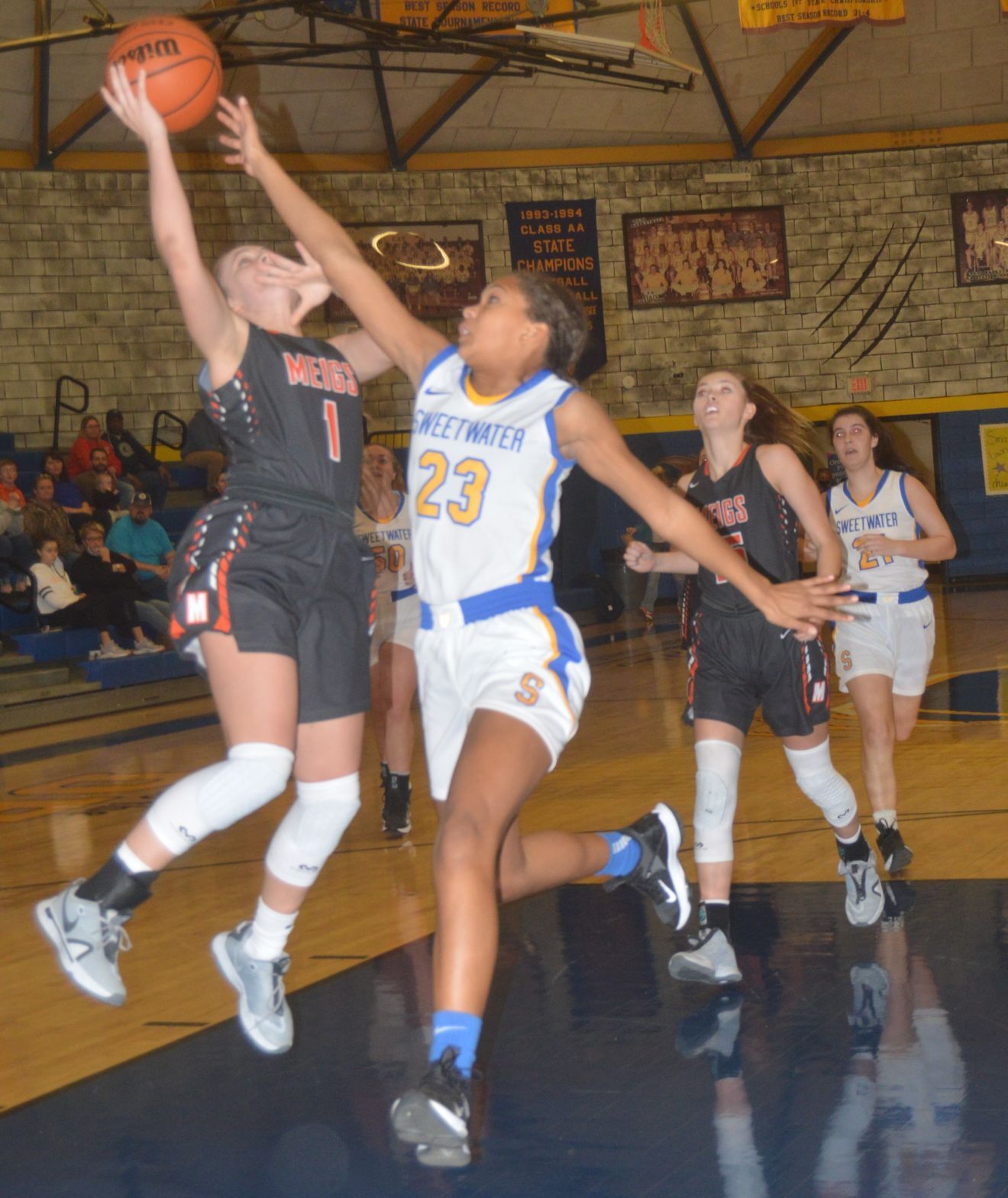 Meigs County’s Anna Crowder goes up for a shot during Friday’s game at Sweetwater. Crowder tied for the team lead with 13 points as the Lady Tigers earned a 44-26 victory. 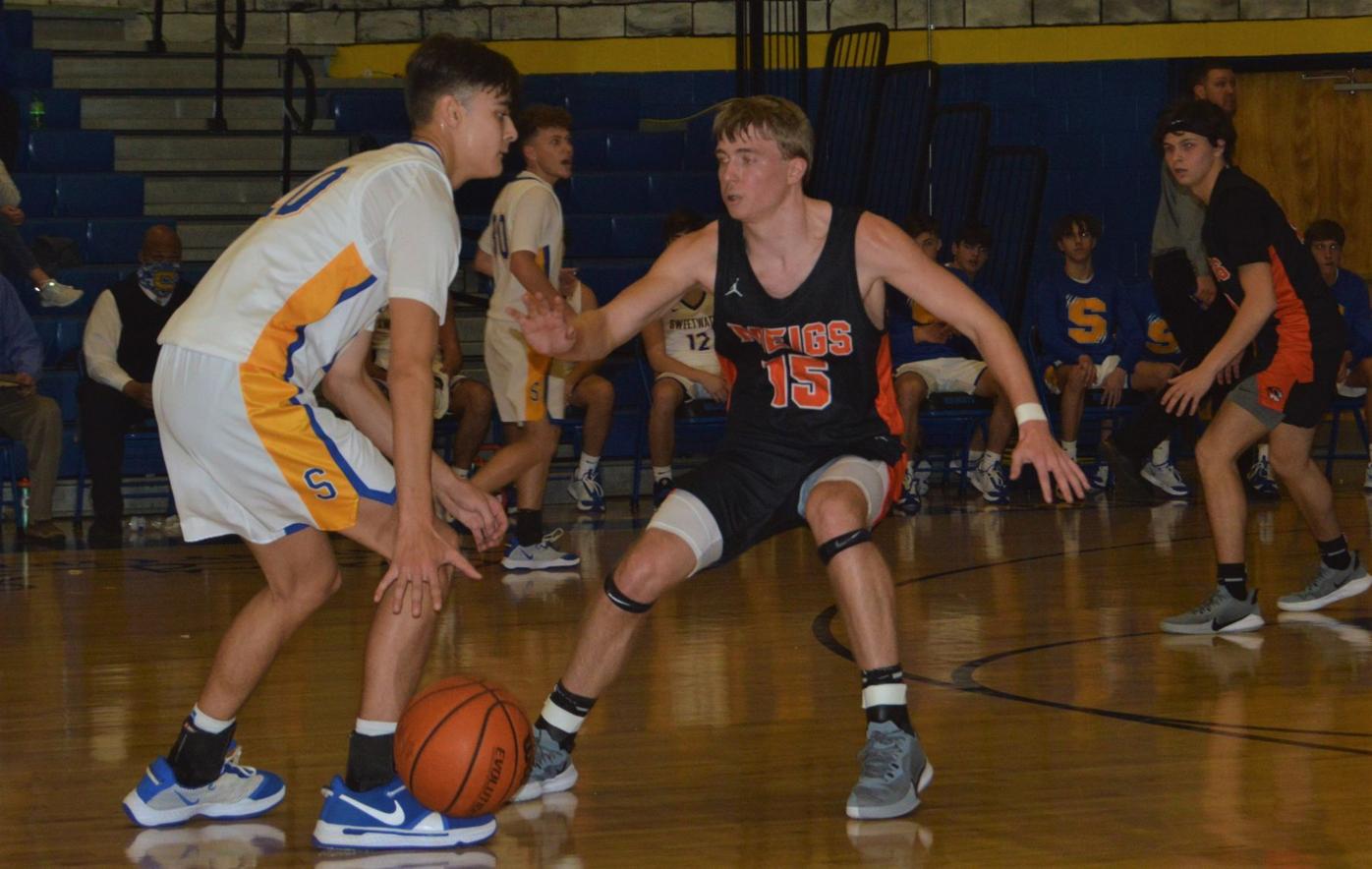 Meigs County’s Anna Crowder goes up for a shot during Friday’s game at Sweetwater. Crowder tied for the team lead with 13 points as the Lady Tigers earned a 44-26 victory.

SWEETWATER — Meigs split a pair of District 5-AA matchups at Sweetwater on Friday as the Lady Tigers earned a comfortable win and the Tigers fell in a tightly contested game.

“I think we played pretty good overall,” Lady Tigers Coach Jason Powell said. “Our press got us some easy buckets. We were able to get it out to 18 or 20 points and able to keep it about that. We got off to a good start and that always helps.”

The Tigers led by one at the half and led by a point with three minutes to play before Sweetwater was able push ahead. Meigs had to foul late in the game and the Wildcats made enough free throws to give the Tigers a 57-51 loss.

“I’m really happy with the kids’ effort, I’m proud of them,” Tigers Coach Sammy Perkinson said. “We played hard and if we can do that we can play with anybody. Everybody was enthusiastic, including the bench. We had a good vibe. I hate that we lost, but we had a good vibe.”

Not that everything was perfect.

“There was one play where we were up by one and Sweetwater missed the shot,” Perkinson said. “We had the rebound, but they took it away from us. They shoot again and miss, they get the rebound. They shoot again, make it, and take the lead. I think that play right there was a major sequence in the game. Needless to say, we will be working on our post defense on Monday.”

The Tigers (4-10, 0-3) were scheduled to face McMinn Central on Tuesday, but that game has been postponed due to COVID issues on the part of Central.

LADY TIGERS 44, LADY WILDCATS 26: The Lady Tigers controlled the game from the outset, outscoring Sweetwater 17-4 in the opening period.

A pair of three-pointers by Jaci Powell led off Meigs’ scoring to put Meigs up 6-0. The Lady Tigers made it 19-0 on buckets by Powell and Anna Crowder. Sweetwater didn’t score until the 3:35 mark and that was a free throw. Another free three made it 10-2 with 2:58 to play.

Buckets by Wade and Talley Lawson put Meigs up 14-2. The quarter ended with a bucket by Sweetwater and then a three-pointer by Wade and Meigs went to the second quarter up 17-4.

The Lady Tigers later led 18-4 and then went on an 8-0 run on a pair of three-pointers by Powell and Wade and a bucket by Anna Crowder. That gave Meigs a 26-9 lead with four minutes left in the first half.

Sweetwater hit a few buckets, but Meigs took back control with baskets by Anna Crowder and Lawson to take a 30-17 halftime lead.

Neither team scored a lot in the third quarter. Sweetwater cut Meigs’ lead to 11 at 33-22, but a bucket by Anna Crowder put Meigs up 35-22 going to the fourth.

A bucket by Sweetwater’s Abbey Barr again pulled Sweetwater to within 11 points at 35-24, but then Meigs went on a 9-0 run to seal the game.

Jacelyn Stone sparked the run with a three-pointer and that was followed by a bucket by Anna Crowder, a bucket by Powell and another basket by Crowder as Meigs moved on to the 44-26 victory.

Powell and Crowder each scored 13 points and Wade finished with 10.

WILDCATS 57, TIGERS 51: The Tigers got two buckets each by Matthew Boshears and Ethan Meadows, but Sweetwater held a 10-8 lead going to the second period.

Payton Armour led off the second quarter with a three-pointer and Boshears later hit another bucket to make it a one-point game, 14-13, in favor of Sweetwater. Meigs outscored Sweetwater 5-3 over the final four minutes. First, Levi Caldwell made a free throw and then, with Sweetwater up 17-14, the period ended with a pair of buckets by Cole Owens.

Seth Caldwell led off the third period with a three-pointer and then a bucket and two free throws by Boshears along with another Seth Caldwell bucket tied the game at 27-27. A pair of buckets by Boshears gave Meigs a 31-29 advantage late in the third quarter.

Two free throws by Sweetwater tied the game at 31-31 with 54 seconds left in the third, but the Wildcats got the offensive rebound and hit a three-pointer to go up 34-31 at the end of the period.

Meigs didn’t go away, however, as buckets by Boshears and Levi Caldwell put Meigs ahead 35-34 early in the fourth.

Sweetwater completed a three-point play and then extended that lead to 43-36.

A pair of three pointers by Meigs, one by Meadows and one by Seth Caldwell, made it a one-point game at 43-42 with Sweetwater ahead.

After another Sweetwater free throw, Seth Caldwell hit a three-pointer to make it 45-44, Meigs, with three minutes to play.

The Tigers then again ran into rebounding problems, leading to several Sweetwater buckets. The Wildcats led 49-45 after a three-pointer with 1:30 to play and Meigs started fouling to stop the clock.

Meigs continued to score, but the Wildcats made enough free throws down the stretch to come away with the six-point victory.

Boshears led the Tigers with 18 points and Meadows finished with 10.

Meigs made eight out of 10 free throws while Sweetwater made 20 out of 29 from the charity stripe.