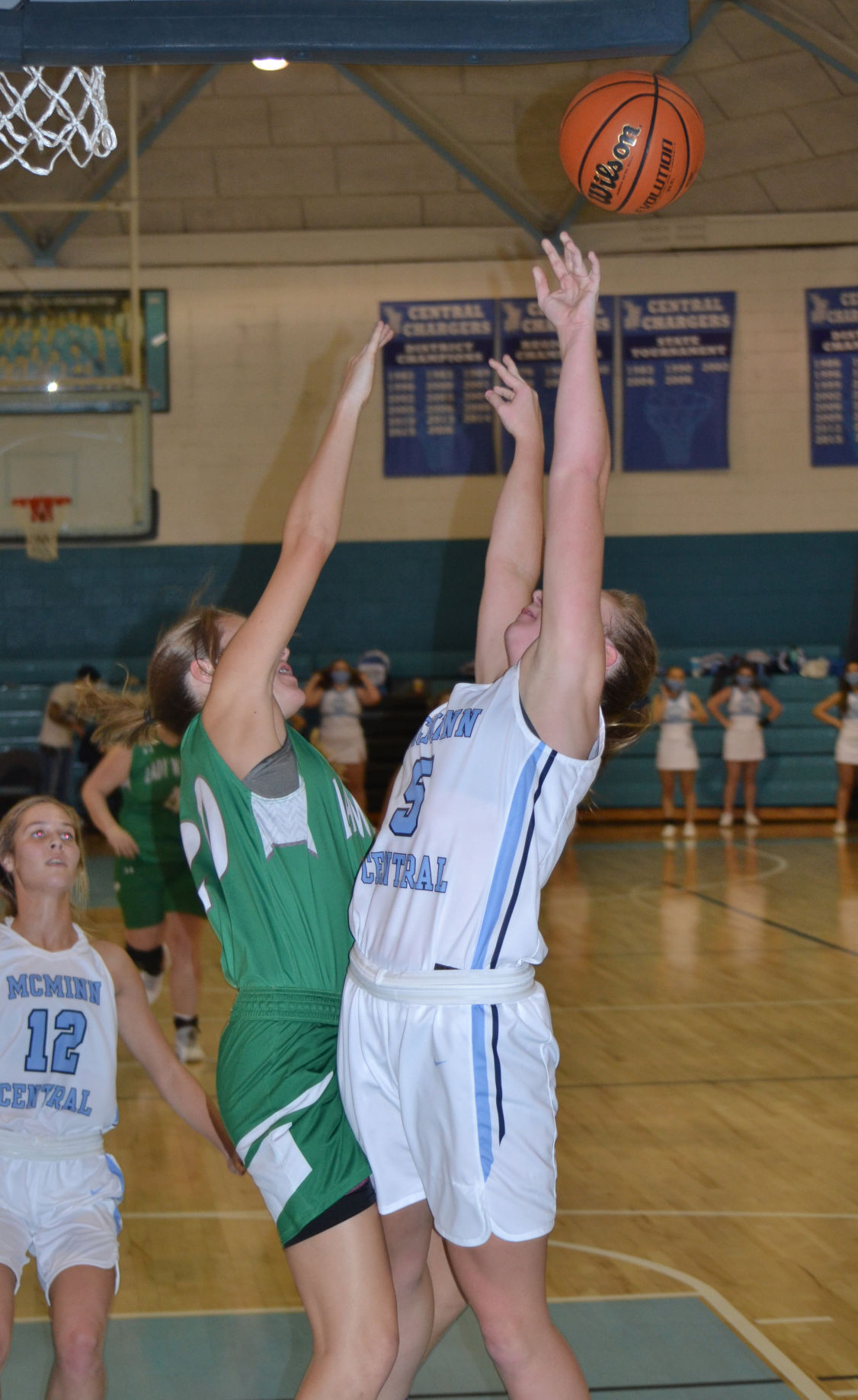 McMinn Central’s Molly Masingale (5) is fouled while shooting a layup. Masingale, a freshman, scored 19 points to go with six rebounds, seven assists and six steals in the Chargerettes’ 84-21 win over Midway on Thursday at The Roundhouse. 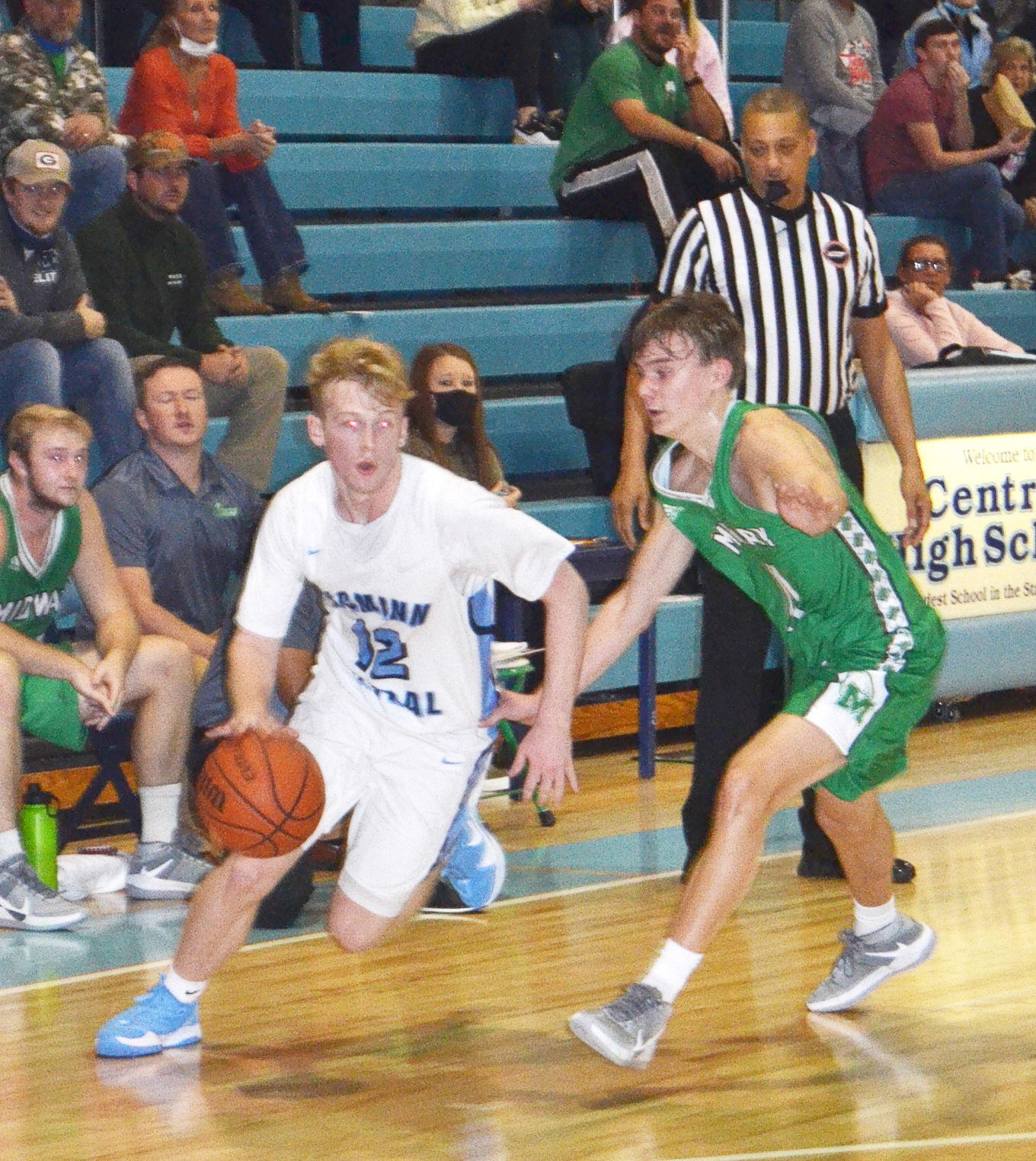 McMinn Central’s Carter Henderson (12) drives past his defender. Henderson scored 15 points in the Chargers’ 77-30 win over Midway on Thursday at The Roundhouse.

McMinn Central’s Molly Masingale (5) is fouled while shooting a layup. Masingale, a freshman, scored 19 points to go with six rebounds, seven assists and six steals in the Chargerettes’ 84-21 win over Midway on Thursday at The Roundhouse.

McMinn Central’s Carter Henderson (12) drives past his defender. Henderson scored 15 points in the Chargers’ 77-30 win over Midway on Thursday at The Roundhouse.

ENGLEWOOD — Both McMinn Central basketball squads made short work of their overmatched opponents Thursday, breezing their way to 2-0 records to begin the season.

The Chargerettes started the girls’ game with a 13-0 run and pitched a shutout third quarter of defense on the way to an 84-21 demolition of Midway’s Lady Waves at The Roundhouse.

“I felt like we had everybody contributing and playing well,” said Central girls’ assistant coach Christy Buckner, who guided the team for the second straight game with head coach Johnny Morgan out due to contact tracing. “We got into a flow there and seemed to do well with our rotation on defense. It got us some good easy buckets on offense that got us going. So I just felt like we got a lot of good momentum going.”

Central’s boys followed with their own rout of Midway. The Chargers began with the game’s first 14 points en route to a 77-30 dismissal of the Green Waves.

“I think the biggest thing is we came out and did a decent job in halfcourt zone defense, and it got us going,” said Chargers assistant Mark Mobley, speaking in lieu of head coach Daniel Curtis. “We didn’t shoot it exceptionally well to start with, but I think we pretty quickly got it at the pace we wanted to play. I’m very pleased both games (this season) with our effort.”

Central’s next time on the court should prove more of a test, as the Chargers and Chargerettes host William Blount on Tuesday back in The Roundhouse, their first of several Class AAA opponents this season. The girls’ game starts at 6 p.m. and the boys’ game at around 7:30 p.m.

CHARGERETTES 84, LADY WAVES 21: Much as she did Tuesday against Silverdale, freshman Molly Masingale got Central off to a quick start, beginning the evening with a three-point play and scoring seven of her 19 points in the first quarter.

And just as she did on Tuesday, Kellan Baker took over in the second quarter, scoring 14 in that frame as the Chargerettes swelled their lead to 39-15 at halftime. Baker had 18 points at the break and finished with a game-high 31, two points short of the junior’s career high.

Central’s defense hit a new level in a 24-0 third quarter. Midway actually had a chance to spoil the shutout quarter with a free throw in a 1-and-1 situation after a foul at the buzzer to end that quarter, but the front end missed.

“We talked at halftime about how we weren’t pressing, but we could still get after it in the halfcourt and work on our halfcourt defense, so that was a goal of ours,” Buckner said of the shutout.

The Chargerettes led 63-15 after three and scored 21 more points in the fourth quarter despite a running clock.

Midway’s Zane Lawhon ended the run with back-to-back 3-pointers, but another Baker basket and an Adrian Lenoir steal-and-score put the Chargers back ahead by double-digits to stay.

Central led 18-7 at the end of the first quarter, and Gabe Masingale promptly scored five quick points, the start to a 13-point second quarter for the freshman coming off the bench. The Chargers went into halftime ahead 47-17 – and that margin would’ve been more had Lawhon not hit a deep buzzer three at the horn for Midway.

If there was anything for the Chargers to complain about in the first half, it was committing eight turnovers.

“We turned the ball over a little too much, but I think it’s something that we can work on,” Mobley said. “We mentioned it at the end of the game, and it’s obvious we’ve got a youth and a lot of experience. Only two guys got to play much last year, so a lot of the things will improve as we go along here.”

Central continued its breakneck pace in a 17-6 third quarter that swelled its lead to 64-23. Henderson scored 12 of his 15 points in that quarter.

Gabe Masingale finished with a game-high 18 points, Henderson with 15 and Sam Masingale and Cox 10 each. All nine Chargers who played ended up scoring points.