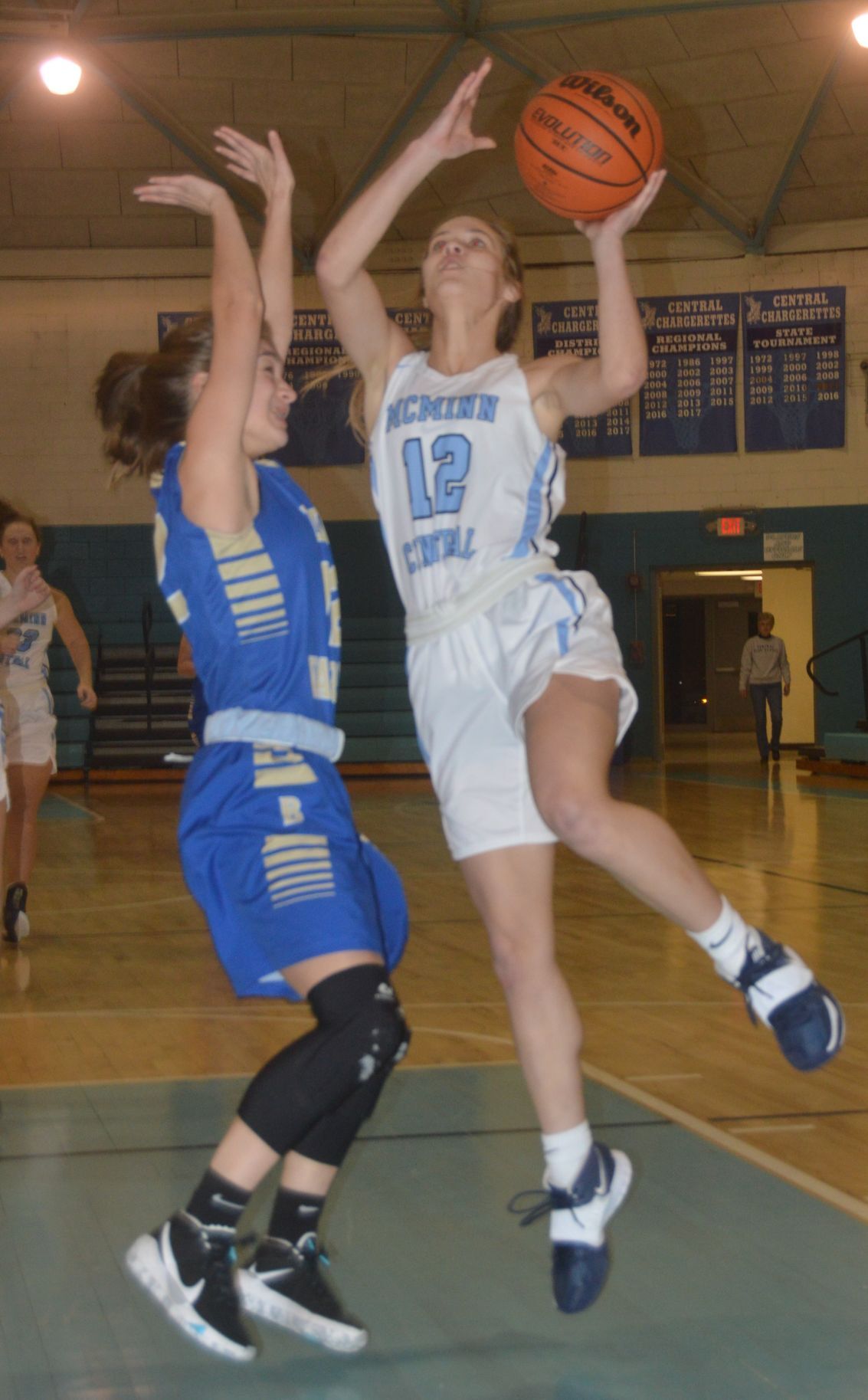 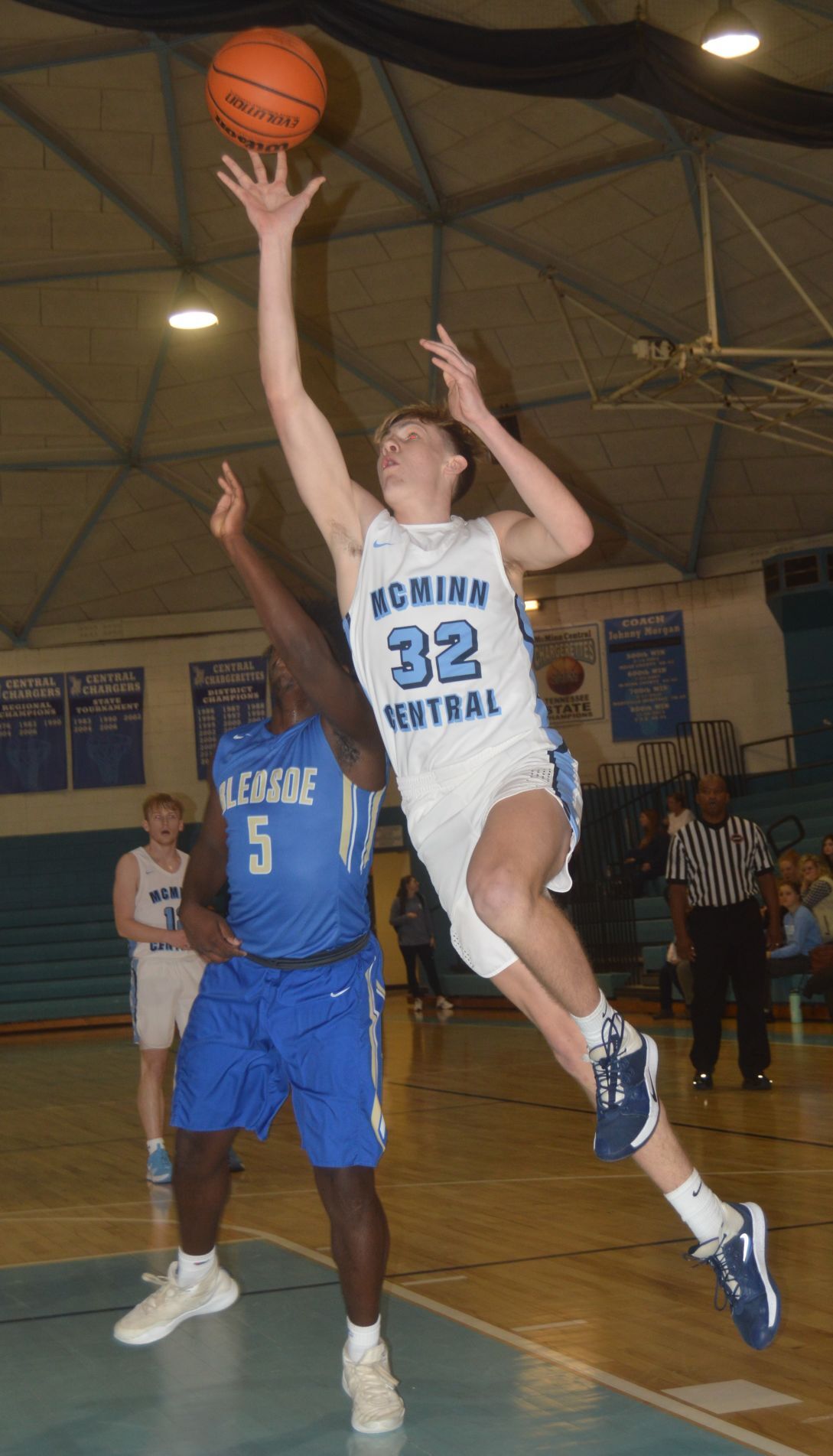 McMinn Central’s Samuel Masingale drives in for two points during the Chargers’ 66-63 loss to Bledsoe on Tuesday.

McMinn Central’s Samuel Masingale drives in for two points during the Chargers’ 66-63 loss to Bledsoe on Tuesday.

ENGLEWOOD — The Chargerettes earned an easy win Tuesday while the Chargers came away with a hard-fought loss as McMinn Central split a pair of non-district games with visiting Bledsoe County.

The Chargerettes defeated the Lady Warriors by 55 points earlier in the year on the road. Central got off to a slow start, but still put the game away early in a 66-23 victory.

“Sometimes it’s hard for players to be motivated when they beat a team easily the first time when they play that team again,” Chargerettes Coach Johnny Morgan said. “But the better teams I’ve been part of, as a player and as a coach, motivate themselves.”

Central led only 9-4 after the first quarter, but then got on track and held a 38-8 halfime lead. Central did not press as it usually does and Morgan said this is the type of game to try to improve on weaknesses.

“There are always things to work on and we wanted to work on our halfcourt offense and halfcourt defense. We haven’t been very good at halfcourt defense all year. I thought we did a better job of playing 5-on-5 tonight, especially in terms of helping out and playing team defense.”

The Chargers fell behind, battled back and then had a chance late to tie the game and force overtime in the final seconds, but could not get a good look at the basket. Coach Daniel Curtis lamented his team’s inconsistency as Central defeated Bledsoe by 24 points earlier in the year.

“That’s just knowing when to score, what time is on the clock, just basketball,” Curtis said of the team’s hurried last second attempts at the tying score. “We are just a young team. When we play well we can be dangerous. When we don’t play well we are bad. You have to give the same effort every night and until we learn that we are going to be up and down. We thought we would cruise and have an easy night, but we didn’t cruise or have an easy night.”

The next scheduled game for Central is a district game at Sequoyah with the Chargerettes (11-3) starting at 6 p.m.and the Chargers (8-6) tipping off around 7:30.

In a possible schedule change, the Central girls may travel to Loudon on Thursday, but that had not been set for sure yet as of Tuesday night.

CHARGERETTES 66, LADY WARRIORS 23: Central got off to a bit of a slow start and was behind 4-3 early. Morgan substituted all five starters with 4:15 left in the first quarter. Morgan wasn’t happy with the way the starters were playing early, but noted that he had planed the mass substitutions beforehand.

The Chargerettes, down 4-3, hit three straight buckets by Makinlee Buckner, Maddox Mayfield and Lucy Davis to take a 9-4 lead to the second quarter.

Carlee Rule drilled a three-pointer to lead off the second period and put Central ahead 12-4. From that point on the Chargerettes dominated.

Kellan Baker scored 16 second-quarter points and finished the first half with 18 points. Kara Crabtree and Molly Masingale also scored and Central led 38-8 at the half.

The Chargerettes continued to pour it on in the second half. Baker, Crabtree, Masingale, Buckner and Maddox all scored in the third quarter and went to the fourth up 54-16. Central cruised from there for the 43-point victory.

Baker led the Chargerettes with 27 points. She was the only Central player in double digits because of the amount of substitutions, but nine Chargerettes scored in the game.

WARRIORS 66, CHARGERS 63: The Chargers fell behind 7-0, but battled back on buckets by Samuel Masingale, Gabe Masingale and a 3-pointer by Carter Henderson. Central trailed only 14-10 going to the second quarter.

Bledsoe’s lead flucuated between three and eight points for the rest of the half. Central was behind 32-24 at the half.

Central later trailed 57-49 with under six minutes to play before three-pointers by Gabe and Samuel Masingale, along with a bucket from Gabe Masingale, cut that lead to 59-57 with 4:40 to play.

The game went back and forth from there with Bledsoe leading 64-61 with 26 seconds to play. Two free throws by Gabe Masingale made it 64-63, but Central had to intentionally foul and Bledsoe’s free throws made it 66-63 with 16 seconds left.

The Chargers missed their first shot and had some other chances as they got a couple of offensive rebounds, but shots were hurried and were off the mark.