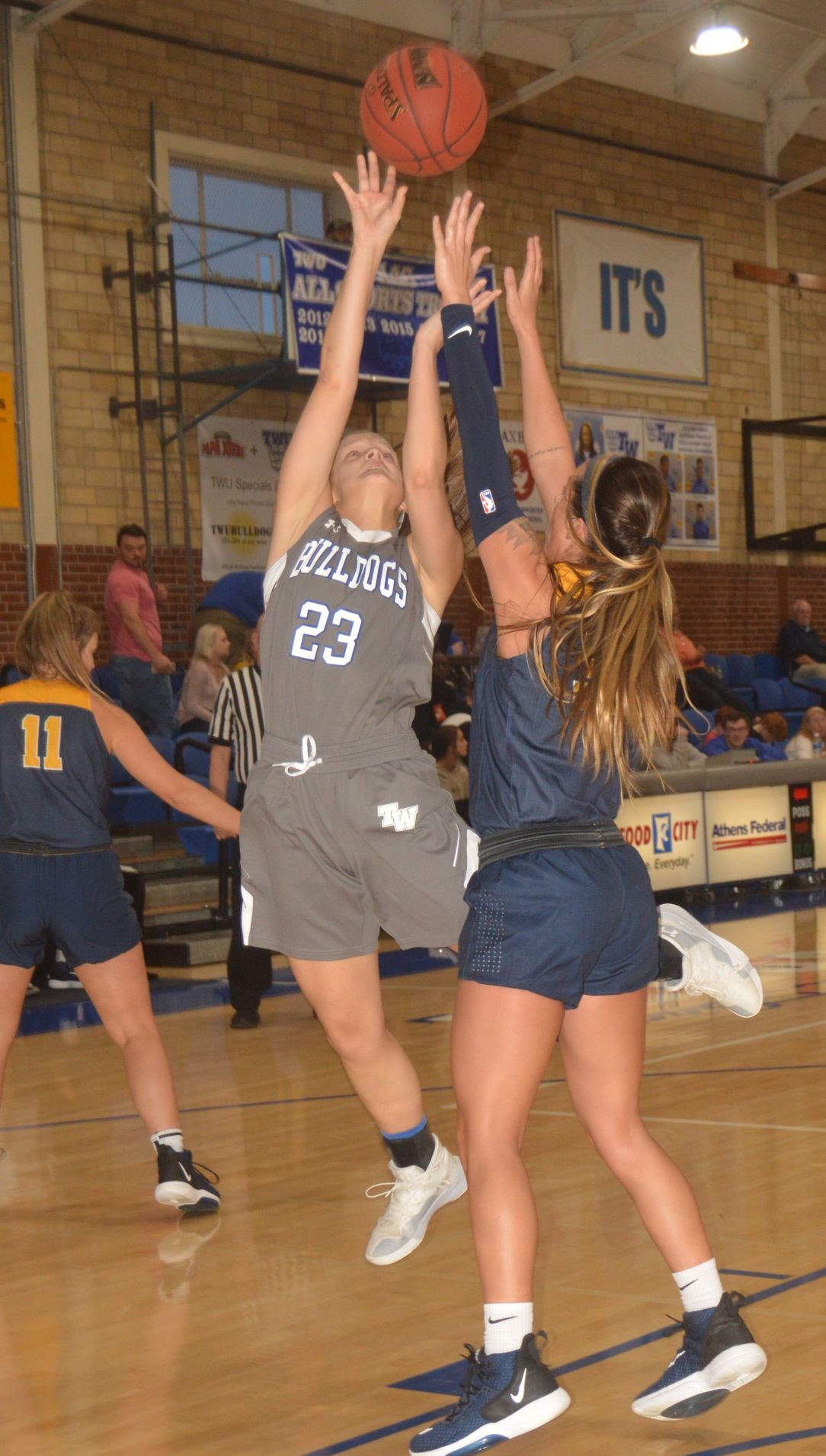 Former McMinn Central star Jordan Wright scored 29 points for Tennessee Wesleyan Wednesday night as the Lady Bulldogs fell 72-66 in overtime to AAC foe Rinehardt, which is ranked in the top 25. 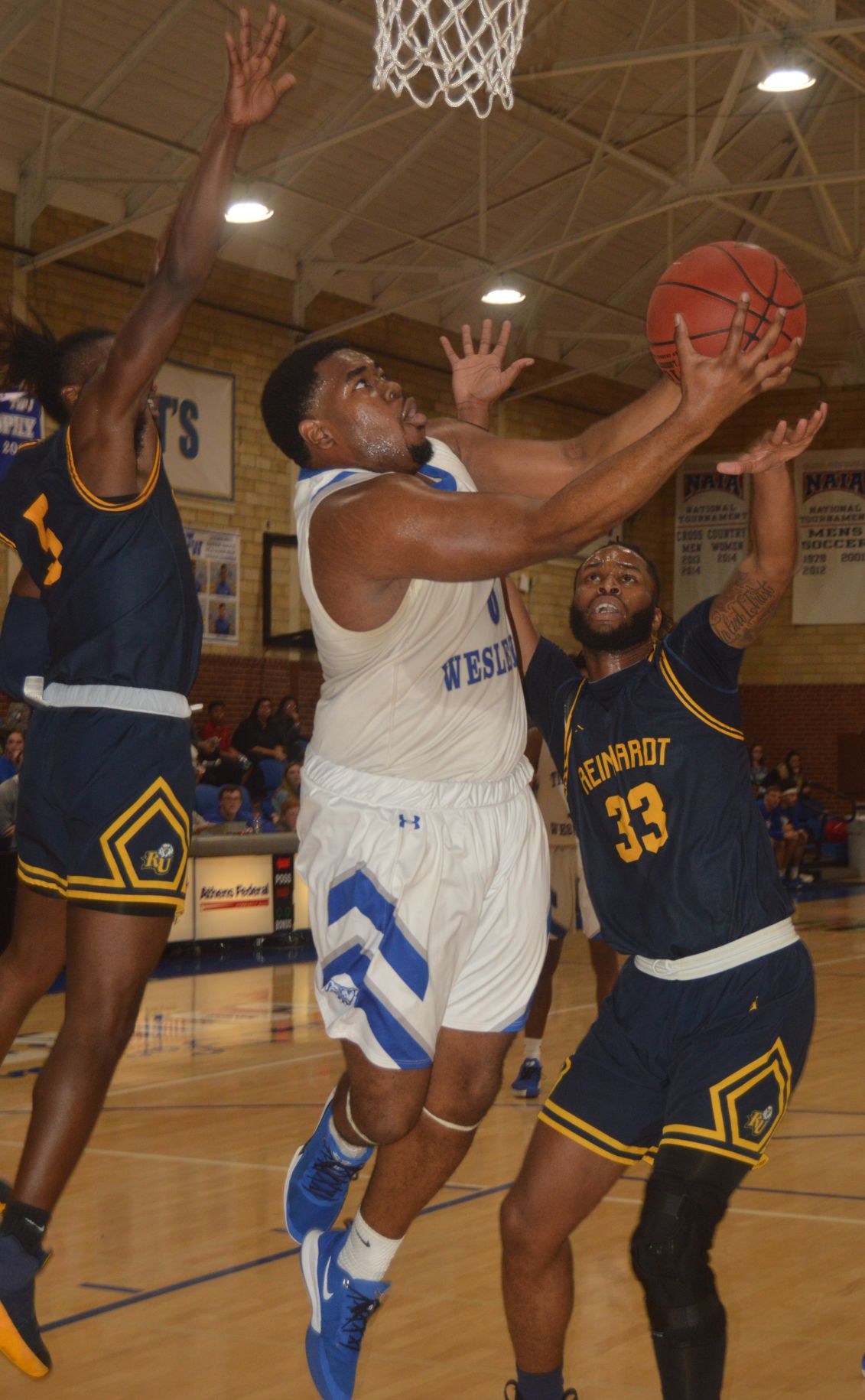 Former McMinn Central star Jordan Wright scored 29 points for Tennessee Wesleyan Wednesday night as the Lady Bulldogs fell 72-66 in overtime to AAC foe Rinehardt, which is ranked in the top 25.

Tennessee Wesleyan split a pair of games against visiting Appalachian Athletic Conference foe Rinehardt and came within a possession of coming away with the sweep.

The Lady Bulldogs went toe-to-toe against a top 25 team before falling 72-66 in overtime.

TWU’s Savannah Atkins hit the game-tying three-pointer near the end of regulation. Wesleyan had a chance to win the game at the last second, but the shot was off the mark and the Lady Eagles won in extra time.

Lady Bulldogs Coach Jeff Rice is not into moral victories, but he said this game showed his team can compete at a high level.

“We had our chance,” Rice said. “We just couldn’t close the deal. But the younger players are getting better. We started two freshmen, two sophomores and a senior. By the time February comes around I think we can be a tough team to deal with, hopefully.”

Rice is espcially complimentary of guard Jordan Wright. She led all scorers with 29 points.

“I think she can be as good a player as there is in the league,” Rice said. “She’s athletic, she’s strong and she can shoot. She needs to play like she did tonight every game. She doesn’t need to score 20 a game, but she needs to be aggressive. I would like to have seen her take that last shot (in regulation).”

The night ended in better fashion for the Bulldogs as the TWU men led by as much as 18 points in a 75-65 victory.

“We defended really well tonight,” Bulldogs Coach Ray Stone said. “We wanted to stay on No. 21 for them (Blake McIntyre) and everybody who guarded him did a great job. Offensively we were patient and made our shots. It was probably the best basketball we have played all year.”

The Bulldogs are currently tied for 8th place and the top eight in the standings qualify for the AAC Tournament so every conference game is huge for the Bulldogs.

The Lady Tigers were 6th before Wednesday’s game.

The Bulldogs and Lady Bulldogs will travel to Kentucky Christian for another AAC matchup on Saturday. The women will tip off at 2 p.m. and the men will follow around 4 p.m.

The Lady Bulldogs were able to keep the game close and the game was tied 12-12 at the end of the first quarter and led 25-24 at the half.

TWU fell behind by 11 points in the third quarter. TWU trailed 45-36 going to the fourth quarter and was behind 53-38 at one point.

A few more buckets by Rinehardt and the Lady Bulldogs may have been in trouble, but Rice said his team showed resilience by fighting back to make it a game.

“Earlier in the year this team may have packed it up and we may have lost by 30,” Rice said. “But we are getting better.”

The Lady Bulldogs refused to quit and began chipping away at the Lady Eagles’ lead with Wright, Hannah Trout and Alyson Crowder doing much of the damage.

A pair of free throws by Wright cut Rinehardt’s lead to 56-55 before a Lady Eagle bucket made it 58-55 with 56 second left in regulation.

Atkins then nailed a three-pointer with 27 seconds left to play to tie the game at 58-58.

The Lady Bulldogs got a defensive stop to set up a last-second shot to win the game, but the shot missed the game went to overtime.

Wright scored all eight of Wesleyan’s overtime points, but it wasn’t enough as Rinehardt pulled out the overtime win.

The Eagles were competitive early and led 20-14 with 10:06 left in the first half before Wesleyan kicked it into gear.

Joshua Chairs’ three-pointer and a bucket by Ty Patterson cut Rinehardt’s lead to 20-19. A short time later a basket by Chairs tied the game at 22-22 and Bill Balogun hit a shot to give Wesleyan a 24-22 advantage.

Another bucket by Balogun, two free throws by Djmon Wilson and three more buckets by Balogun gave Wesleyan a 33-24 lead with 4:04 left in the first half and then a three-pointer by Jonathan Webb made it 36-24.

Later, Rinehardt was able to cut into the lead and McIntyre’s pair of treys right before the half cut Wesleyan’s lead to just three at 38-35 at the half.

Stone said the Bulldogs stuck to their gameplan of trying to control McIntyre and make somebody else beat them.

Wesleyan’s Dominique Oggs scored TWU’s first six points of the second half and then a bucket by Patterson put the Bulldogs up 46-40.

Wesleyan began to pull away at this point with Oggs, Jamesio Rhine, Wilson, Chairs, Patterson, Balogun and Dalton Conn all scoring to give Wesleyan a 70-52 lead with 3:31 to play, which was TWU’s largest lead of the game. Rinehardt hit some late shots to close the game, but Wesleyan still came away with a comfortable 10-point win.