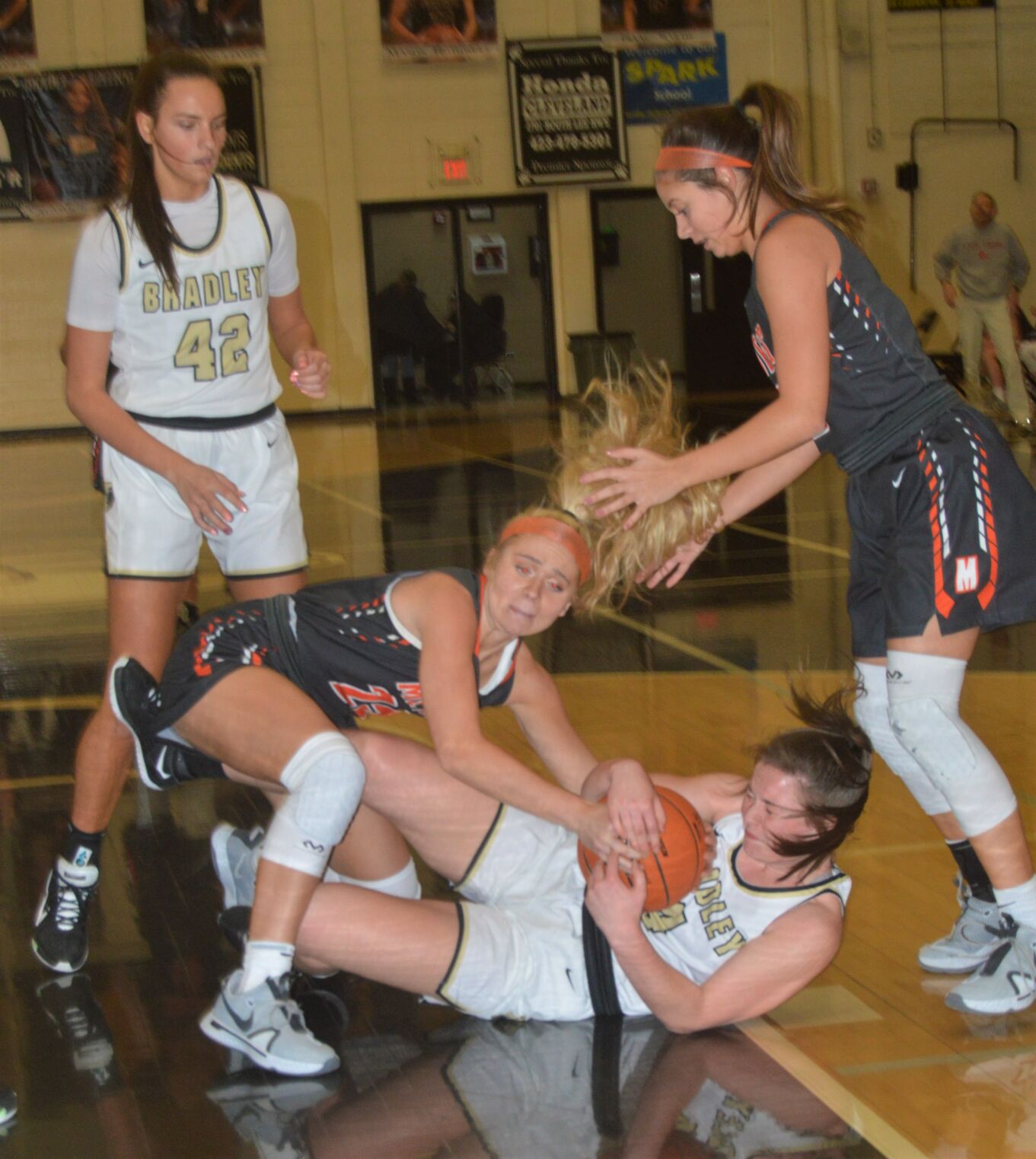 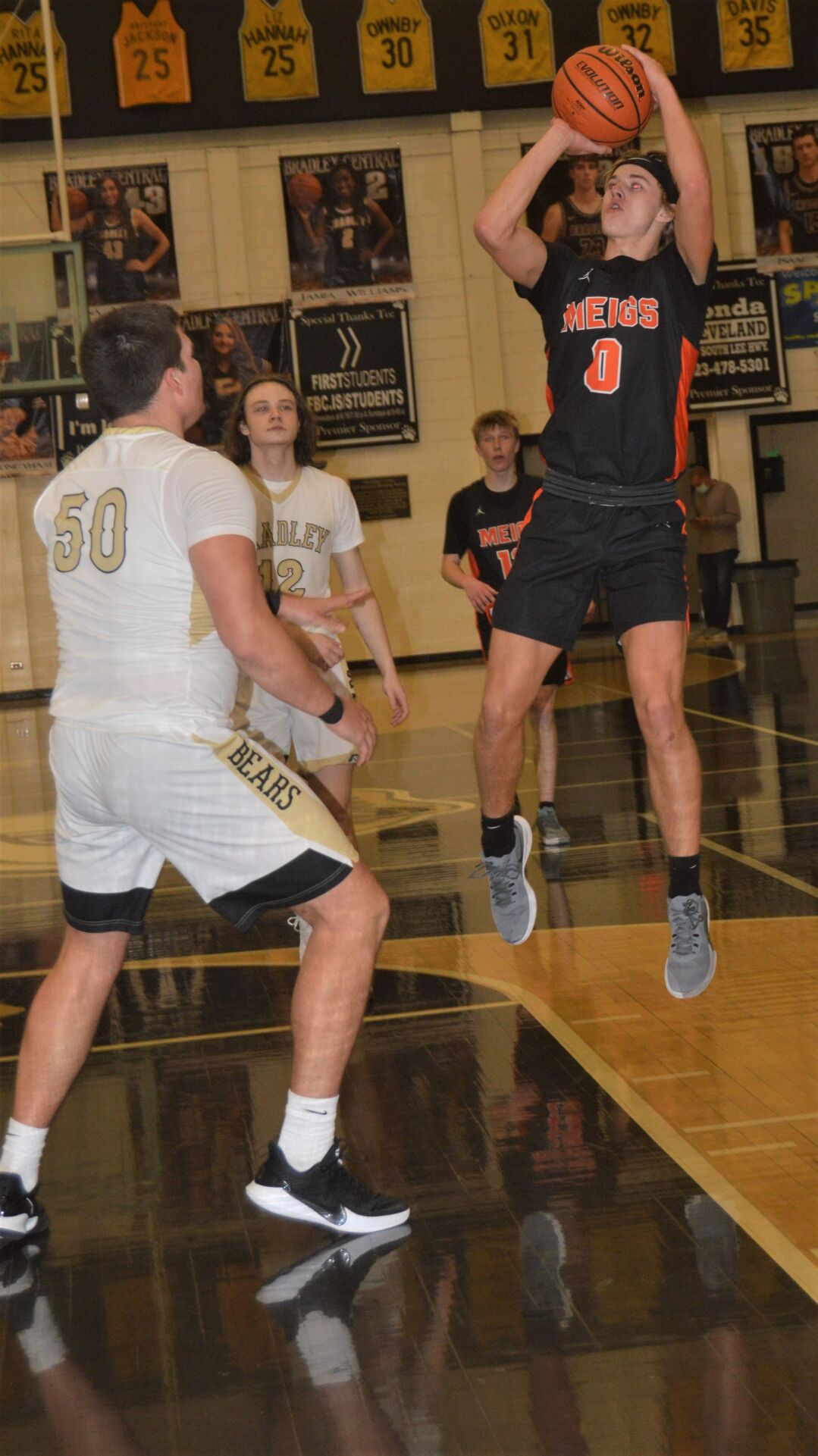 The Lady Tigers were more than just competitive with the much larger class AAA team for most of the game before running out of gas in a 47-37 loss.

“I have no complaints about our effort,” Lady Tiger Coach Jason Powell said. “We went to war with them and we competed. That team (Bradley) may win their district so the fact that we were able to hang with them shows a lot. I’m proud of them for their effort.”

Unfortunately for Meigs fans, the Tigers were not as close as the Meigs boys lost 71-38. The Tigers were ahead early, but once Bradley took the lead that lead kept getting larger.

“It was just bad coaching,” Tigers Coach Sammy Perkinson said. “As a coach you want to put your kids in the best position to win the game. It was bad coaching, that’s the bottom line.”

Perkinson then added the game plan didn’t go as planned.

“We wanted to shorten the game,” Perkinson said. “We are outmanned, but they can’t score if they don’t have the ball. Then we go jacking it up, they get the rebound and go score.”

The Tigers (3-9) will travel back to Cleveland on Tuesday to face Tennessee Christian Preparatory School at 7:30 p.m. The Lady Tigers’ varsity squad (4-3) will not play, but the girl’s junior varsity team will tip off at 6 p.m.

A pair of buckets by Stone later made it 15-10, Lady Tigers, in the second quarter, but Bradley fought back to tie the game at 17-17 with two minutes left in the half. The two teams traded points, but Meigs’ points came on a three-pointer by Powell and the Lady Tigers led 20-19 at the break.

The two teams went toe-to-toe in the third quarter with Wade and Anna Crowder scoring for Meigs. A bucket by Ella Crowder tied the game at 26-26 with 3:05 left in the third, but Bradley ended the period with a 7-2 run and held a 33-28 advantage going to the fourth.

Meigs was able to shave that lead to 35-32 early in the fourth, but that was as close as Meigs could get for the rest of the game.

Bradley scored six out of the final eight points in the game to come away with a 47-37 victory.

Bradley’s size showed up in the fourth quarter as the Bearrettes were able to score off of several offensive rebounds and solid play in the paint. Bradley outscored Meigs 32-18 in the paint and outrebounded the Lady Tigers 26-17.

Meigs’ pressure did bother Bradley a bit as the Lady Tigers forced 14 turnovers, though Meigs turned the ball over 16 times.

Stone led the Lady Tigers with 11 points, three assists, five rebounds and a steal. Wade added nine points, including a pair of three-pointers.

The Tigers played well early, countering an early Bradley three-pointer with one of their own by Seth Caldwell. After another trey by the Bears, Cole Owens hit a bucket and then Ethan Meadows completed a three-point play to put Meigs ahead 8-6 with 2:21 left in the first quarter.

Bradley, however, went on a 12-0 run on four consecutive three-pointers to go up 18-8. The period ended with a three-pointer by Owens and the Tigers went to the second quarter behind 18-11.

The game got away from the Tigers in the second stanza as Bradley won the period 14-0 and led 32-11 at the half.

Meigs played even with Bradley in the third quarter, outscoring the Bears 25-24 in the period. Payton Armour and Cameron Huckabey did much of the heavy lifting for the Tigers in the third along with Meadows, Matthew Boshears and Jackson Frazier.

But Meigs still trailed 56-36 going to the fourth and scored only two points in the final period as both teams inserted younger players as Bradley went on to earn the 71-38 victory.

Meadows led the Tigers with nine points and Boshears finished with eight.