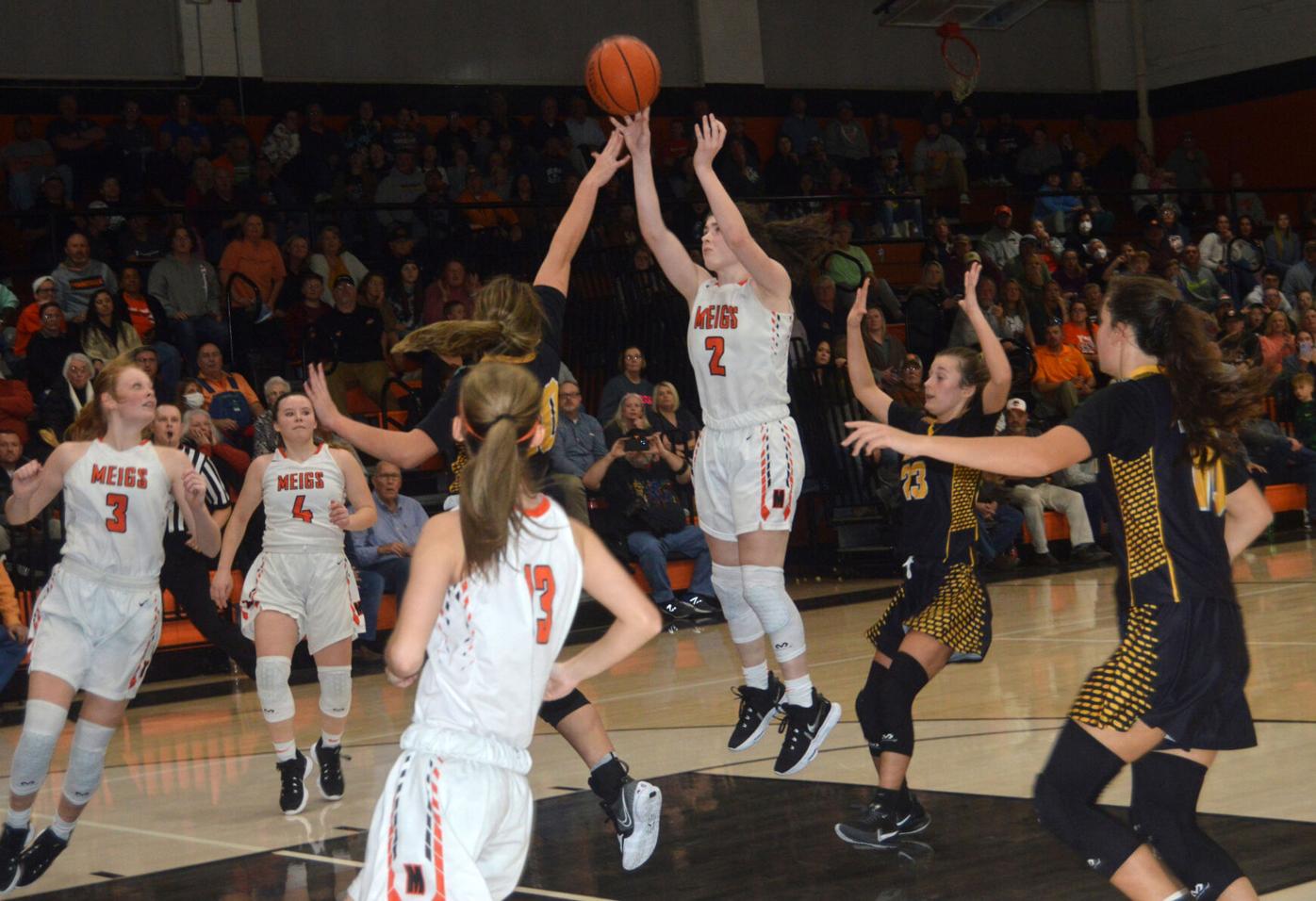 Meigs County's Talley Lawson (2) made this game-winning shot at the buzzer Monday as the Lady Tigers defeated the Lady Cherokees 57-56. 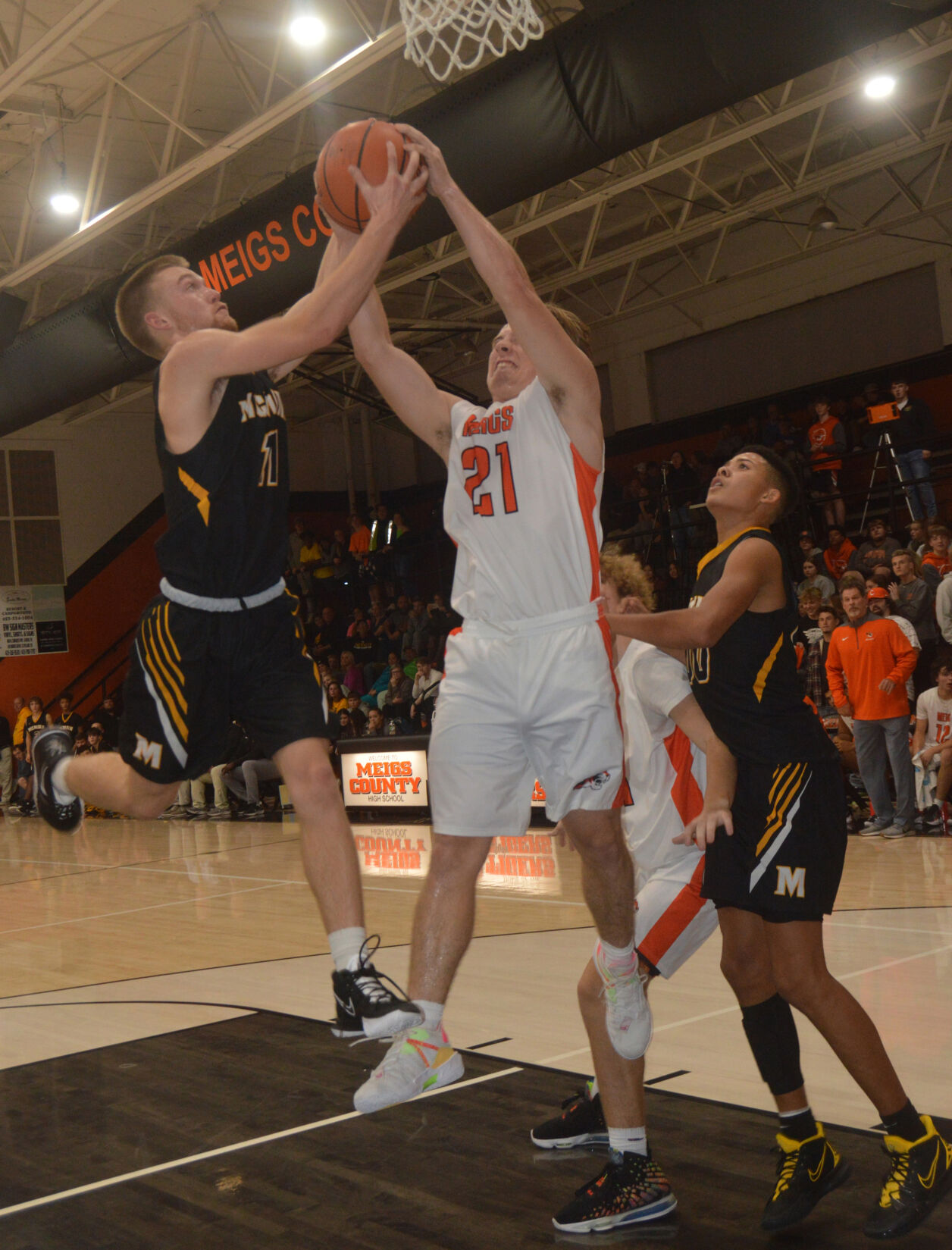 McMinn's Trent Peak (11) and Meigs' Jackson Shaver (21) battle for a rebound during the Cherokees' 73-71 overtime victory on Monday.

Meigs County's Talley Lawson (2) made this game-winning shot at the buzzer Monday as the Lady Tigers defeated the Lady Cherokees 57-56.

McMinn's Trent Peak (11) and Meigs' Jackson Shaver (21) battle for a rebound during the Cherokees' 73-71 overtime victory on Monday.

DECATUR - Fans of both teams got their money’s worth Monday as Meigs County and McMinn County split a pair of hard-fought games with the slimmest of margins.

The Lady Tigers’ Talley Lawson hit a shot at the buzzer to give Meigs a 57-56 victory. Meanwhile, the Cherokees grabbed a late lead and then forced a tough last-second shot by Meigs that was off the mark in a 73-71 win for McMinn.

The Lady Tigers jumped out to a solid first-half lead before the Lady Cherokees rallied in the second half.

McMinn grabbed a one-point lead after hitting three free throws with six seconds to play when McMinn was fouled attempting a three-point play.

That gave McMinn a 56-55 lead, setting up Lawson’s game-winning shot at the buzzer.

Meigs was only 6-for-17 at the free throw line and committed 18 turnovers, but the Lady Tigers earned the win anyway.

“That’s something we need to get better at,” Meigs Coach Derika Jenkins said. “But we hung in there and Talley hit the shot. I’m proud of everyone. We didn’t play perfect, but once we put everything together we will be OK.”

While disappointed in the loss, Lady Cherokees Coach David Tucker said playing in a hotly contested game in a loud gym on the road will help his team improve.

“We battled all night,” Tucker said. “Meigs just made the play. Meigs made plays all night. But we did too and we played hard in a hostile atmosphere. This will make us better.”

The situation was almost the same in the boys' game, but this time the Cherokees pulled out the win.

“That is a good team we beat tonight,” Cherokees Coach Randy Casey said. “It is a well-coached team and they played well. But, with that said, I’m proud of my team. We played well. Any time you can come to a place like this and win you played well.”

Meigs Coach Sammy Perkinson was happy his team played hard and had its chances in regulation.

“It was a good game between two good teams,” Perkinson said. “That was a fun game to coach. The biggest difference to me was that they got a lot of second chance points. They just wore us out on the glass. But we gave ourselves a chance and that’s all you can ask for.”

The two teams battled back and forth early with Konstantina Papaioannou, Addie Smith and Peyton Oliver leading the way for McMinn.

The Lady Cherokees led 10-6 with about 3:50 left in the opening period, but Meigs finished the quarter with an 11-1 run.

Julia Howard sparked Meigs’ run with a bucket and then a shot by Lawson made it 10-10. Lawson then hit another bucket, followed by one from Kaydence Schaumburg to put Meigs up 14-11. A three by Meigs put the Lady Tigers on top 17-11 going to the second quarter.

Meigs forged a solid lead in the second quarter with Lainey Fitzgerald, Carroll, Schaumburg, Cayden Hennessee and Howard all scoring in the second period.

Smith and Oliver led McMinn, but Meigs led 38-26 at the half.

The Lady Cherokees came out strong in the third quarter and quickly closed the gap. A three-pointer by Smith and a bucket by Hennessee highlighted the end of the third period with Meigs leading 48-42.

Now in the fourth, two free throws by Aubrey Gonzalez, a trey by Smith and a pair of free throws by Oliver cut Meigs’ lead to 52-49 with 4:11 left in the game.

Free throws by Allie Hansford then made it 52-51, in favor of Meigs.

The teams battled hard over the next few minutes. Meigs missed at least eight free throws in in the fourth, but led 54-53. Lawson made one free throw with 13.2 seconds to play to make it 55-53.

McMinn continued to play hard and the Lady Cherokees took a 56-55 lead with six seconds to play when Oliver was fouled as she attempted a three-point shot.

Oliver made all three free throws to put the Lady Cherokees ahead 56-55.

Meigs, however, pulled out the game when Lawson swished a shot from the top of the key at the buzzer to give Meigs the 57-56 victory.

Lawson led the Lady Tigers with 14 points while Smith and Oliver both scored 17 points for the Lady Cherokees.

Meigs started off strong with with Matthew Boshears, Ethan Meadows and Payton Armour leading the way for Meigs. But McMinn, who was down 14-5 early, battled back to make it 14-10 on a bucket by Davion Evans, and then a free throw and a field goal by Caden Hester.

The Tigers got on another roll with Armour completing a three-point play and Alex Schaumburg hitting a trey as the Tigers went up 22-12.

The Cherokees ended the first quarter with back-to-back ‘3’s by Trent Peak and Tucker Monroe and Meigs led 22-18 going to the second period.

Ty Runyan set the tone for McMinn to start the second quarter with a trey and then Hayden Smith hit a bucket to put the Cherokees up 23-22.

From that point it was a battle all the way to the end.

Landon Shirk scored for McMinn with a minute left in the half, but Armour made two free throws to end the period with McMinn ahead 41-40 at the intermission.

The game remained hotly contested in the third quarter, but Meigs took a slight 55-52 lead going to the fourth after a bucket by Boshears.

Neither team could earn the win in regulation and the game went to overtime knotted at 69-69.

Runyan hit what turned out to be the game-winning shot with 21 seconds left as Meigs’ buzzer beater was off the mark to give McMinn the 73-71 victory.

Peak topped McMinn’s scoring with 17 points while Runyan finished with 16 and Monroe chipped in 11. McMinn had seven players score.

Meadows led all scorers with 26 points. Armour finished with 15 points and Boshears had 10. Meigs finished with eight players scoring.