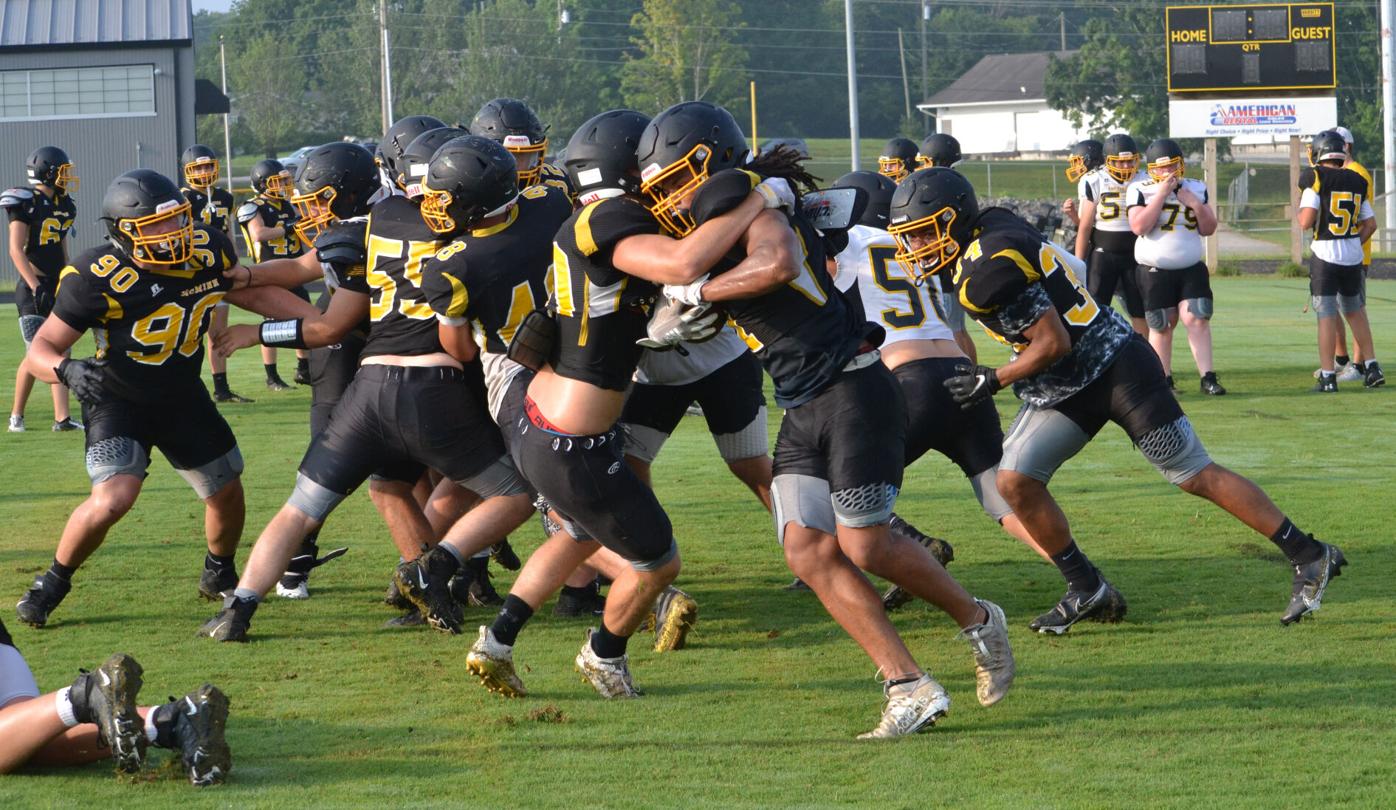 McMinn County's Danyul Belton (right) attempts to run through the tackle of Kutler Blackwell during the Cherokees' first full-contact practice of the preseason Monday at McMinn County High School. 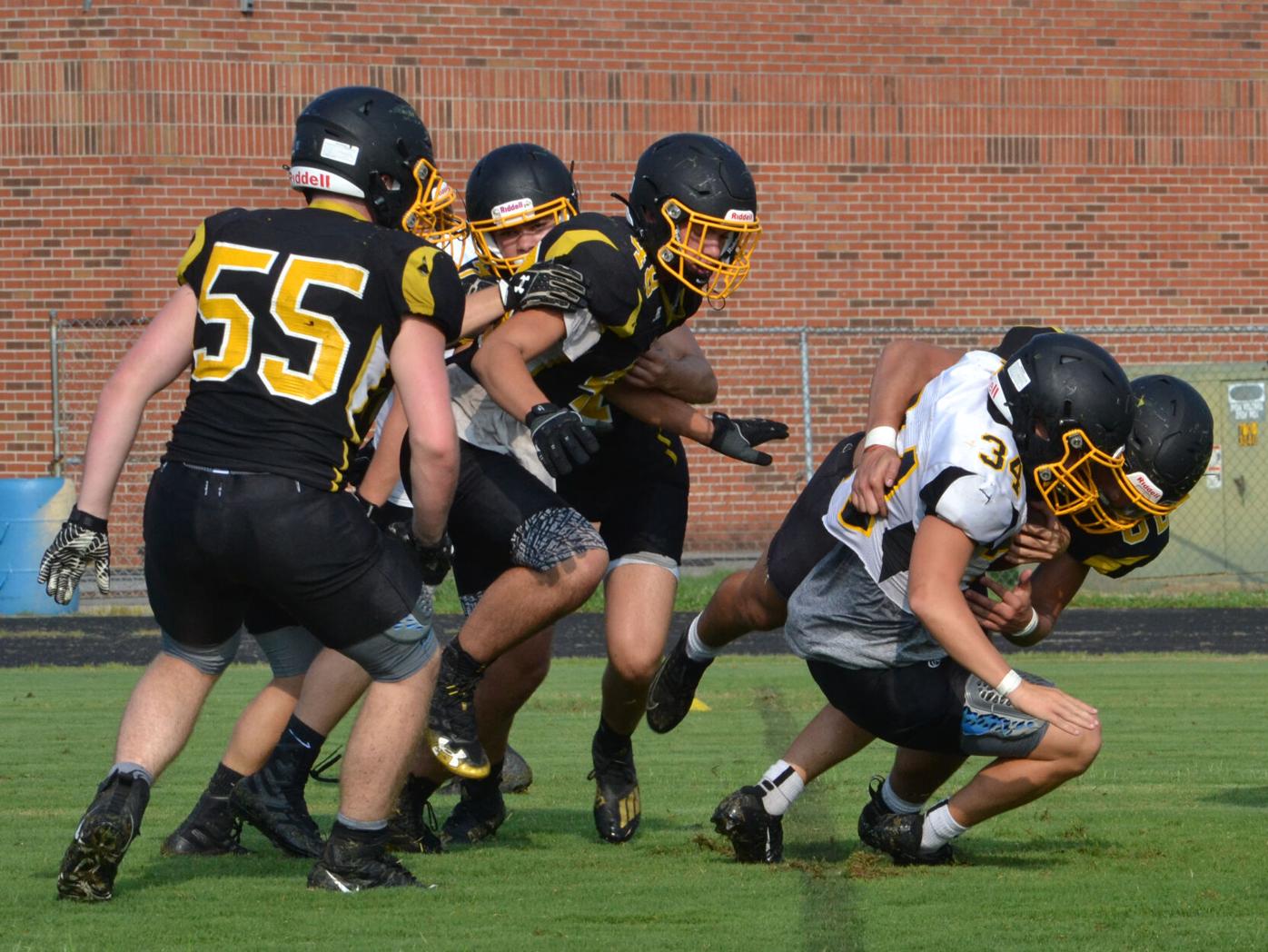 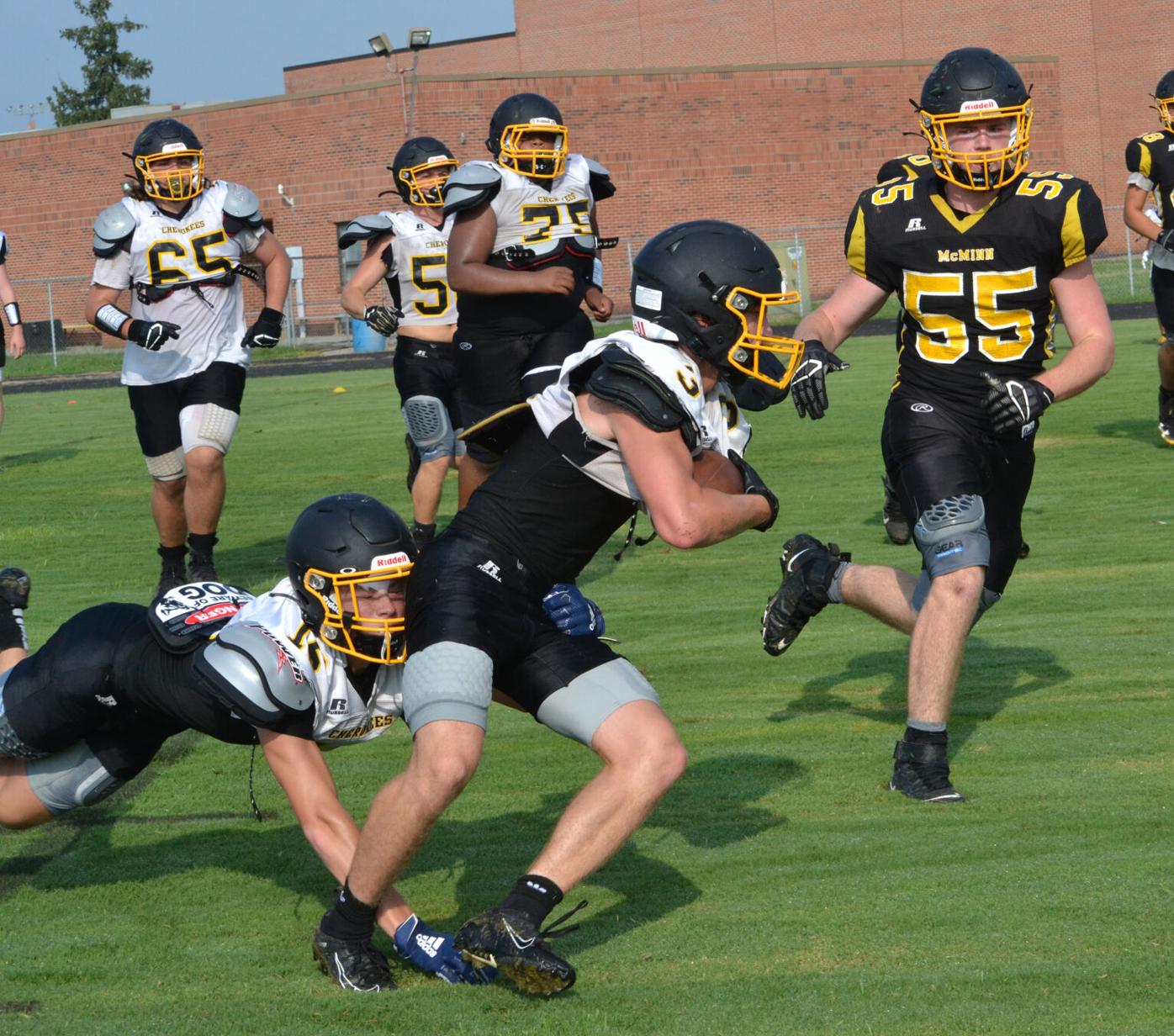 McMinn County's Luke Hensley (3) attempts to step out of the tackle attempt of Caden Hester (bottom left) after making a catch, as Aiden Wilson (55) closes in during the Cherokees' first full-contact practice of the preseason Monday at McMinn County High School.

McMinn County's Danyul Belton (right) attempts to run through the tackle of Kutler Blackwell during the Cherokees' first full-contact practice of the preseason Monday at McMinn County High School.

McMinn County's Luke Hensley (3) attempts to step out of the tackle attempt of Caden Hester (bottom left) after making a catch, as Aiden Wilson (55) closes in during the Cherokees' first full-contact practice of the preseason Monday at McMinn County High School.

McMinn County has a football team to build out of plenty of new faces and less than a month in which to do it.

And coach Bo Cagle hopes the rest of the preseason goes better than the Cherokees' first day of full-contact practice did Monday morning.

It was not the effort – nor the attendance – the 15th-year head coach was expecting from the Tribe the first day football teams around the state got to pop pads.

"There just wasn't any energy, we weren't moving around like we should," said Cagle, whose Cherokees participated in FCA Camp at Carson-Newman University last week. "We had some people missing, and that's the good thing about camp, you can't miss, you're there. I expect better for the rest of the week than that right there. We should be better than that."

McMinn faces the task of replacing 19 graduated seniors from a team that finished last season with a 10-1 record and advancement to the second round of the TSSAA Class 6A playoffs.

The Cherokees are in Class 5A for the next two seasons after reclassification, but even with the drop in class, losing four seniors off last year's offensive line – three of whom will be playing college football this fall – and the school's all-time leading rusher, Jalen Hunt, will make for a daunting rebuild.

If Cagle was encouraged by anything Monday, it was the improvement of many of the younger players.

"I think our young guys are getting better," Cagle said. "They're getting coached up, they're getting better. I think we've obviously got to build a lot of depth because we lost everything, so there is no depth. So it's important for the young guys to get things done and get better. But our older ones obviously need to be better examples for them the rest of the week."

Cagle noted some of the Cherokees' slow play Monday simply had to do with their inexperience.

"We've got a bunch of new players playing different positions, and they've got to learn what they're doing and be able to play with some integrity, whereas they don't have to think while they're playing," Cagle said. "And right now we're thinking as we're playing, so everything's slow. We've got to learn what we're doing so we don't do that. It's fundamental, fundamental, fundamental for a while until we can move on and do things."

After roughly two hours of fundamental work Monday, the Cherokees' first-string offense and defense faced off for the last 30 minutes, with McMinn mixing in the pass more than it has in recent seasons.

The Tribe was even throwing passes near the goal line, something Cagle said they "haven't done in several years." It is an adjustment that might be expected with the apparent strengths of McMinn's offense being junior quarterback Jayden Miller and several athletes on the perimeter.

"We should be multiple. We've got a quarterback who has played a full season there," Cagle said. "And we've got some capable receivers who are out there running routes. Our offensive line right now is still getting better. They're learning.

"Last year we hung on to that offensive line to get a passing game going, though we didn't really need one. But this year maybe it'll be the opposite: our offensive line will get better as we're able to be more multiple to be able to run the ball later on. The pass may set up the run this year, I don't know."

With preseason scrimmages once again permitted this year, McMinn will host four other teams at Cherokee Stadium for its first full-contact scrimmage of the preseason starting 6 p.m. Friday. Participating in the scrimmage will be Bradley Central, Soddy-Daisy, Baylor and Notre Dame. The scrimmage is open to the public, with tickets $5 each.