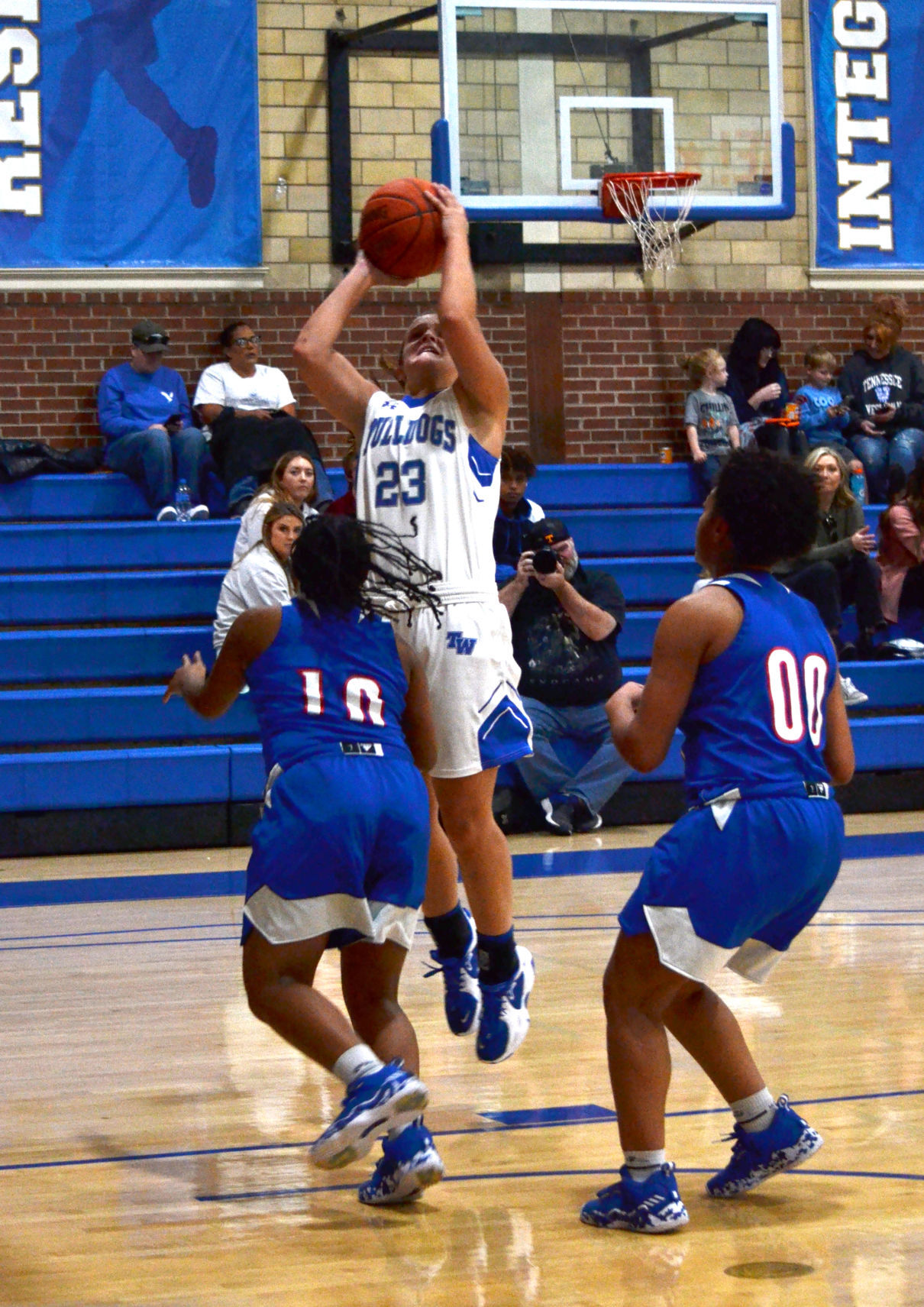 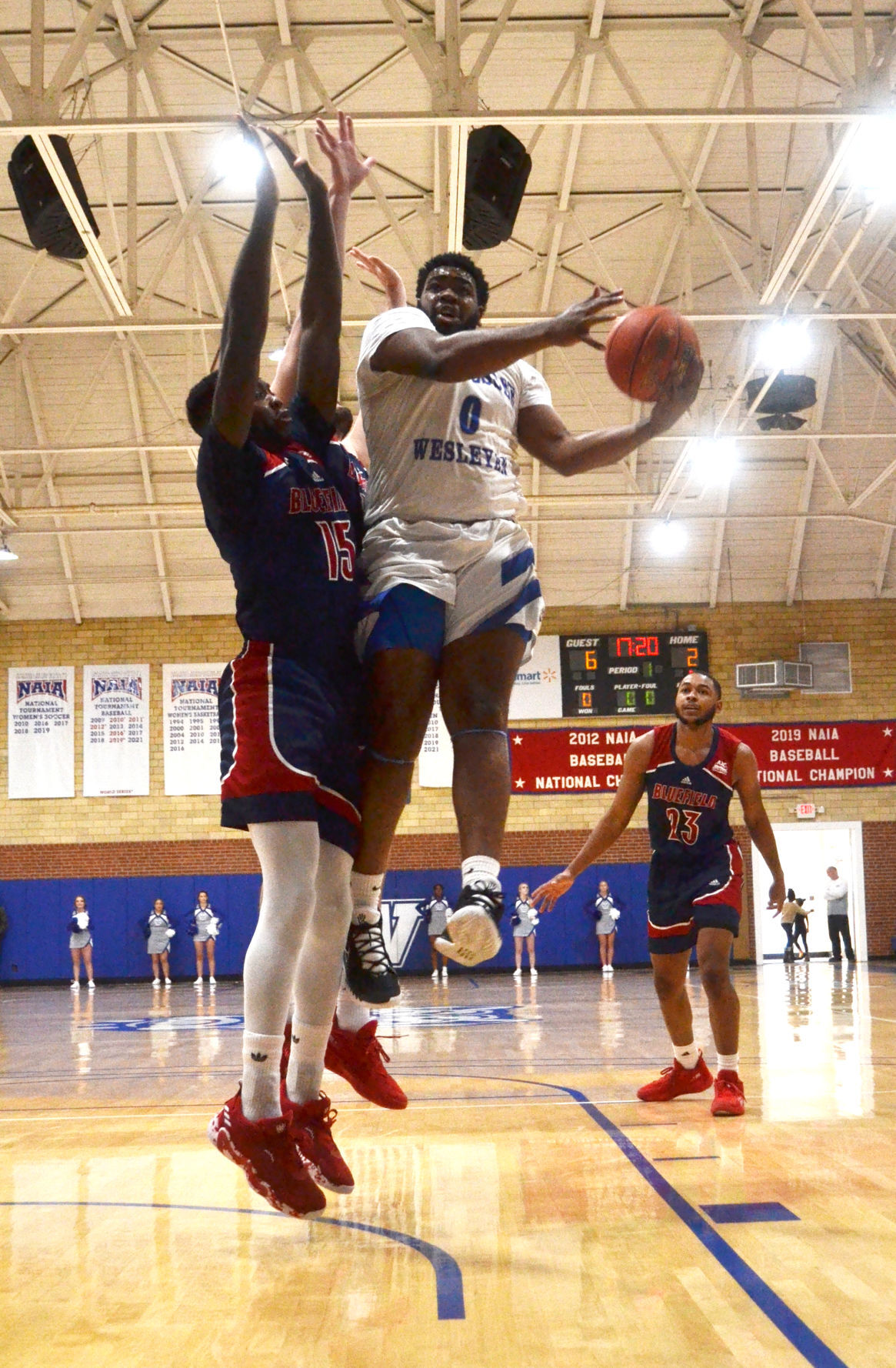 Tennessee Wesleyan’s Ty Patterson (0) leaps into the lane against Bluefield on Saturday at James L. Robb Gymnasium. Patterson scored a career-high 31 points and pulled 18 rebounds in the Bulldogs’ 78-68 win.

Tennessee Wesleyan’s Ty Patterson (0) leaps into the lane against Bluefield on Saturday at James L. Robb Gymnasium. Patterson scored a career-high 31 points and pulled 18 rebounds in the Bulldogs’ 78-68 win.

A couple of former area standouts made the plays late in overtime to return the Lady Bulldogs to the win column.

Jacelyn Stone picked up a steal with Tennessee Wesleyan’s women protecting a two-point lead with 12 seconds left and called timeout. Jordan Wright then drew a foul after the ensuing inbounds pass and made both free throws to seal the 76-72 win over Bluefield in AAC play on Saturday at James L. Robb Gymnasium.

“Big play by Stone to get that steal in the end,” said Lady Bulldogs coach Jeff Rice. “It was nice to be able to go to the free throw line and be able to finish the deal that way.”

Cambree Mayo, who led TWU (5-2, 4-1 AAC) with 21 points, made a layup with 2:28 left in overtime to put the Lady Bulldogs ahead for good at 71-70. Stone, a former Meigs County standout, drove to the basket for another layup to extend the lead to three points, but the Lady Rams answered to inch back within 73-72.

Anna Crowder, also a Meigs graduate, made one of two free throws to bump the margin back to two points with 36 seconds left. Stone, who finished with 18 points, made her biggest play Saturday on defense. Crowder finished the game with 11 points and Wright, a former McMinn Central standout, scored eight points.

Bluefield had led about midway through the first quarter before the Lady Bulldogs pulled ahead to a 22-18 lead at the end of it. TWU, coming off its first AAC loss Wednesday at Milligan, could only increase its lead to as much as seven points before taking a 37-32 edge into halftime.

The Lady Bulldogs led by as much as 12 points in the third quarter, but Bluefield closed the period on a 7-0 run to cut TWU’s lead to a precarious 55-50 entering the fourth.

Layups from Crowder and Stone and seven straight points from Mayo had TWU leading 66-60 with 3:14 left in regulation, but Bluefield scored the next six points to force overtime. A potential winning layup from Mayo missed the mark at the buzzer.

Bluefield took its first lead since the first quarter, 70-69, with 3:14 left in overtime before the Lady Bulldogs seized it back and held on.

“The only time we feel like we have a sense of urgency is when we’re behind,” Rice said. “And that’s when we want to be playing with our hair on fire and attacking the rim and going and trying to shoot layups. We just didn’t have enough of that tonight.”

The Lady Bulldogs remain home for their next game 5:30 p.m. Tuesday against Brenau in AAC play.

“He’s in a zone right now,” said Bulldogs coach Ray Stone about Patterson. “He’s been playing well for us, and we needed all those 31 points and all those 18 rebounds today. You see the minutes, he played the whole game. I called that last timeout just to give him a little break.”

“Bluefield came out very aggressive, and I didn’t feel like we came out focused and weren’t getting up and down the court like we typically do,” Stone said. “But like I told them at halftime, they adjusted and we were able to build a lead going into halftime.”

Playing for Bluefield was Brandon Shields, a former teammate of Patterson at Believe Prep Academy in Athens, where both players were coached by current McMinn County boys’ head coach Randy Casey. Shields finished with six points for the Rams.

The Bulldogs shot 48.5% from the floor and out-rebounded Bluefield 50-29, but they also committed 20 turnovers.

TWU’s men have the Thanksgiving week off and return to action at Kentucky Christian in AAC play on Dec. 1.