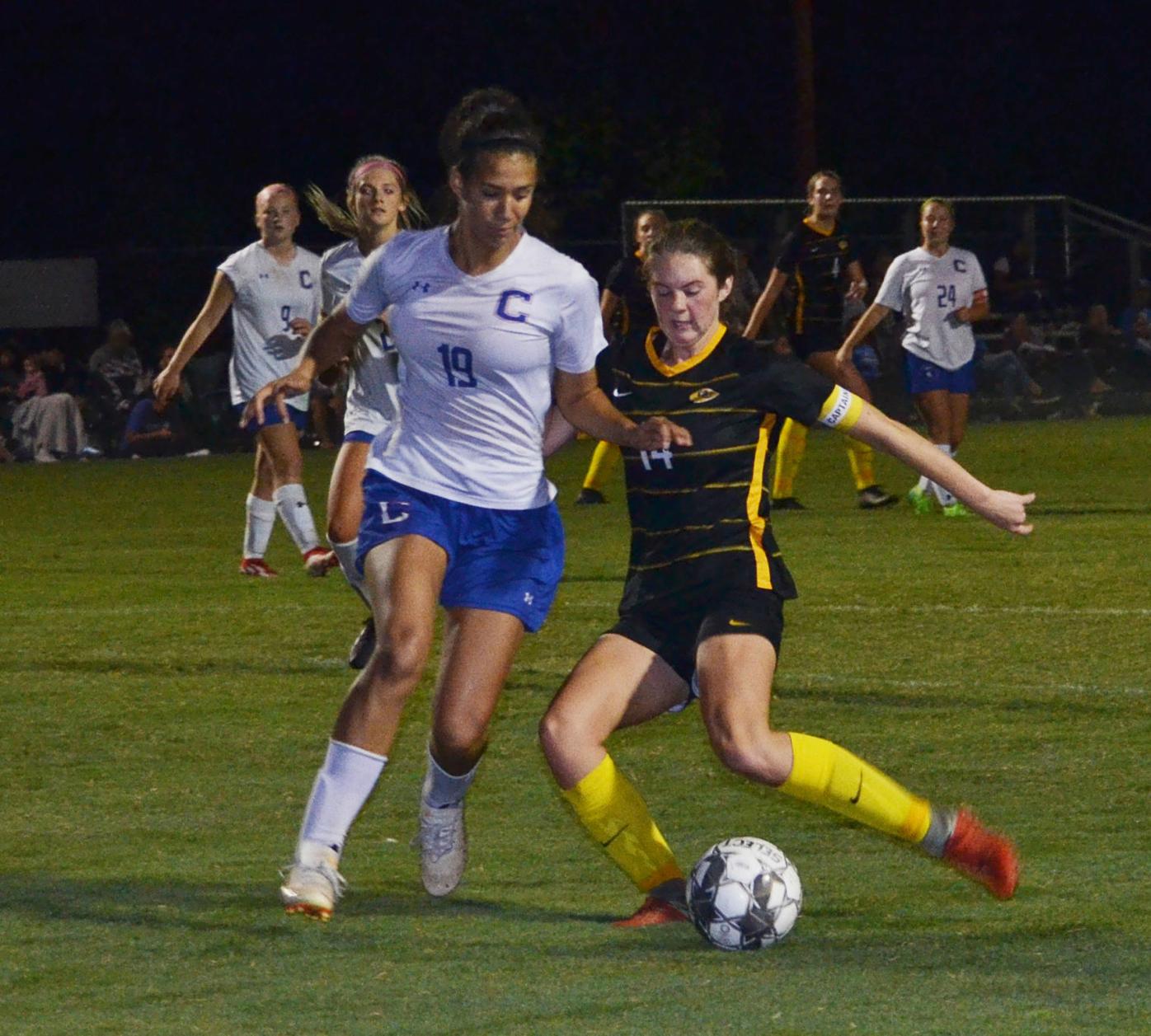 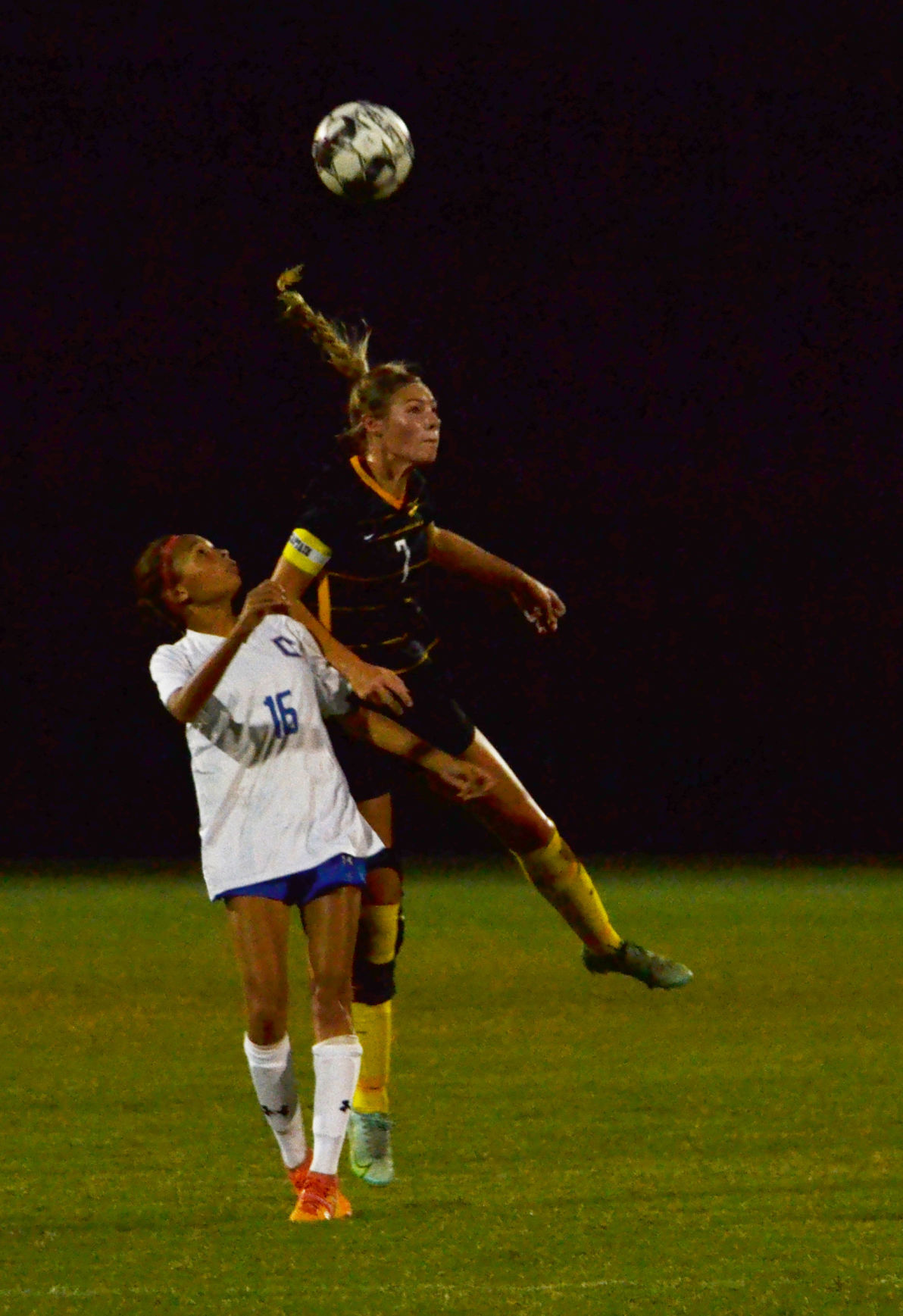 McMinn County’s Addie Smith (7) heads the ball out of the air against Cleveland during the Lady Cherokees’ 10-2 District 5-AAA semifnals win Tuesday at the McMinn County Soccer Complex.

McMinn County’s Addie Smith (7) heads the ball out of the air against Cleveland during the Lady Cherokees’ 10-2 District 5-AAA semifnals win Tuesday at the McMinn County Soccer Complex.

Perhaps it was from being off their typical schedule during Fall Break, but McMinn County found itself in an unusual situation after conceding a go-ahead goal to Cleveland in the first minute.

But any danger of a shocking District 5-AAA semifinals exit for the Lady Cherokees lasted for all of about eight minutes before they erupted for six first half goals and dismissed the Lady Raiders 10-2 on Tuesday at the McMinn County Soccer Complex.

“They went and had breakfast this morning but then had the rest of the day to kind of do nothing,” said Lady Tribe coach Jordan Jacob. “I tried to encourage them to get up and go for walks and do things, don’t just lay on the couch or whatever and watch Netflix all day. But I think it’s just that we’re out of our normal routine and so it just took us a few minutes to wake up.”

Fourth-seeded Cleveland drew a penalty just outside McMinn’s 18-yard box, and Ashlyn Robbins arced the free kick perfectly over the leaping reach of goalkeeper Bella Hooper to put the Lady Cherokees in a 1-0 hole 48 seconds in.

McMinn (11-2-1) promptly began a withering assault on the Lady Raiders’ goal, firing off five shots and two corner kicks over the next seven minutes. The second of those corner kicks, from Addie Smith, resulted in the eighth-minute equalizer as Allison Hansford squared up and put a forehead on it for her first of five goals for the evening.

Less than a minute later, Lexi Lawson put the Lady Cherokees ahead for good with a hard ground shot that the Cleveland goalie appeared to stop for the save before it slipped out of her grip and into the goal.

Hansford converted a point-blank one-on-one against the keeper, after a Smith pass from the midfield, in the 16th minute for a 3-1 McMinn lead. The Liberty commit then tacked on her third goal and McMinn’s fourth at 13:17 before halftime.

Only 27 seconds after Hansford’s third score, Kylee Hockman struck for a 5-1 lead. Hansford then added her fourth with 4:20 before the break, as freshman Mackenzie Howard made a heady pass out of traffic near the top of Cleveland’s penalty box to set the senior up for the finish.

Hansford picked up where she left off as the second half began, taking only 30 seconds into it to strike from the left wing and increase the Lady Cherokees’ lead to 7-1.

“We got in the flow of the game, and we just played like who we are,” Jacob said. “Once again, it was a mental thing that we’ll address (Wednesday), and then we’ll make sure that on Thursday during our warm-up we get game speed before kickoff.”

Cleveland found a second goal with 24 minutes left in the game, which helped the Lady Raiders prevent McMinn from ending the semifinal early via mercy rule. Hockman made it a brace with her second goal at 10:15 left, and Lawson tacked on goals with 7:23 and 6:05 left to record a hat trick of her own. Smith and Howard finished with two assists each.

McMinn finished with a 40-9 overall shots advantage and 19-7 on goal and got five corner kicks to Cleveland’s two. Hooper snagged two saves in the first half, and backup keeper Autumn Taylor, a freshman, had three saves in the second half.

The Lady Cherokees move on to the District 5-AAA championship match, which they will host 7 p.m. Thursday back at the McMinn County Soccer Complex. McMinn will be aiming for its fourth straight district title.

The Lady Tribe’s opponent will be No. 2 seed Rhea County, who defeated Walker Valley 3-2 in Tuesday’s other semifinal. McMinn had won the regular-season meeting with the Lady Eagles 5-0 on the road, but took a while to overcome Rhea’s physical play in the first half and still scored only one goal after halftime.

Win or lose Thursday, McMinn is also in the Region 3-AAA tournament next week.

“It was a physical matchup, and they’re going to come ready to play and wanting to win,” Jacob said of Rhea. “So we should expect that.

“I think after we responded to that first early goal we gave up, I think the girls will be ready to go.”