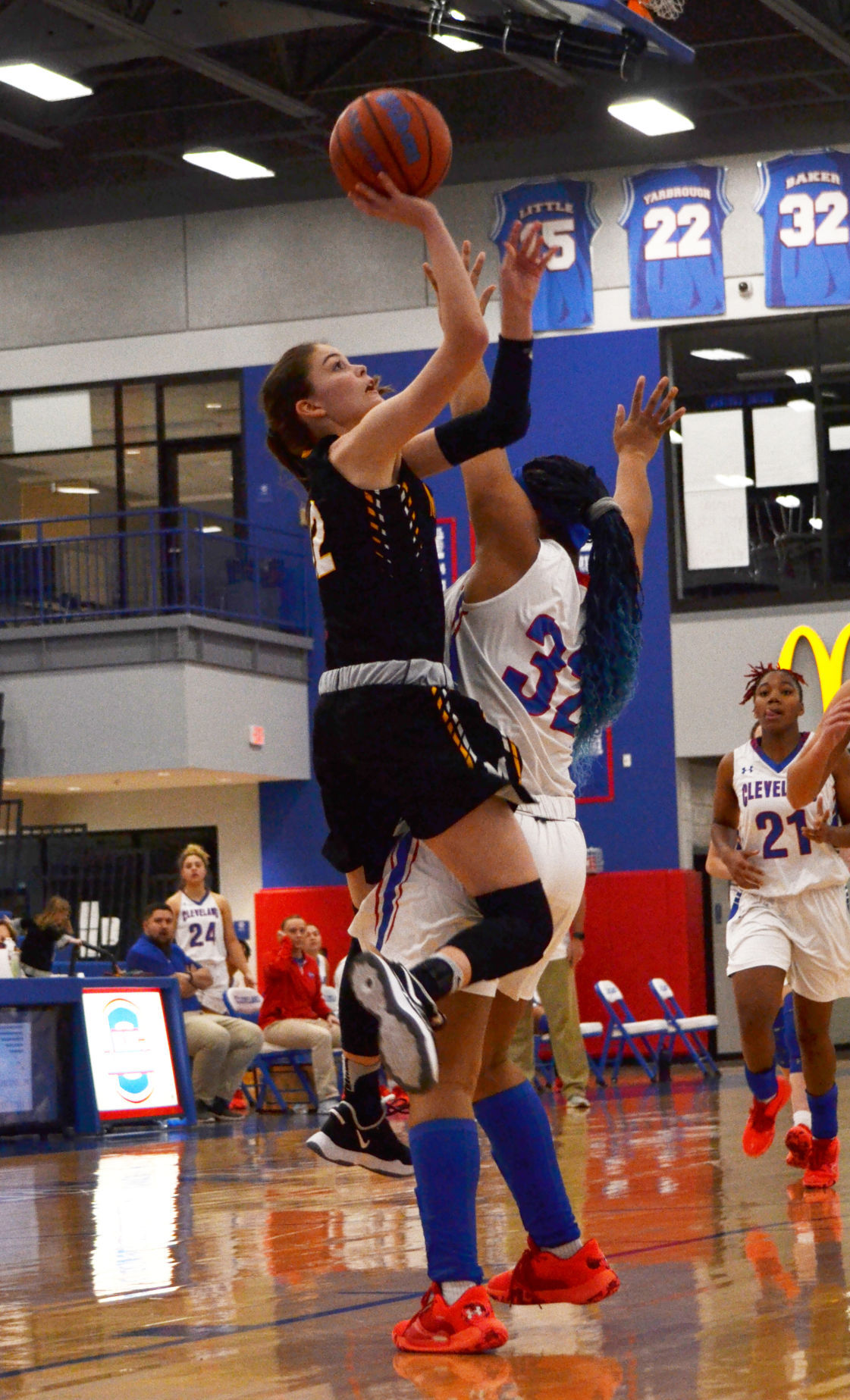 McMinn County’s Brooklyn Stinnett (left) prepares to make a shot while being fouled by a Cleveland defender during the District 5-AAA tournament semifinal Saturday at Raider Arena. Stinnett scored all 12 of her points in the fourth quarter and overtime in the Lady Cherokees’ 56-51 win. 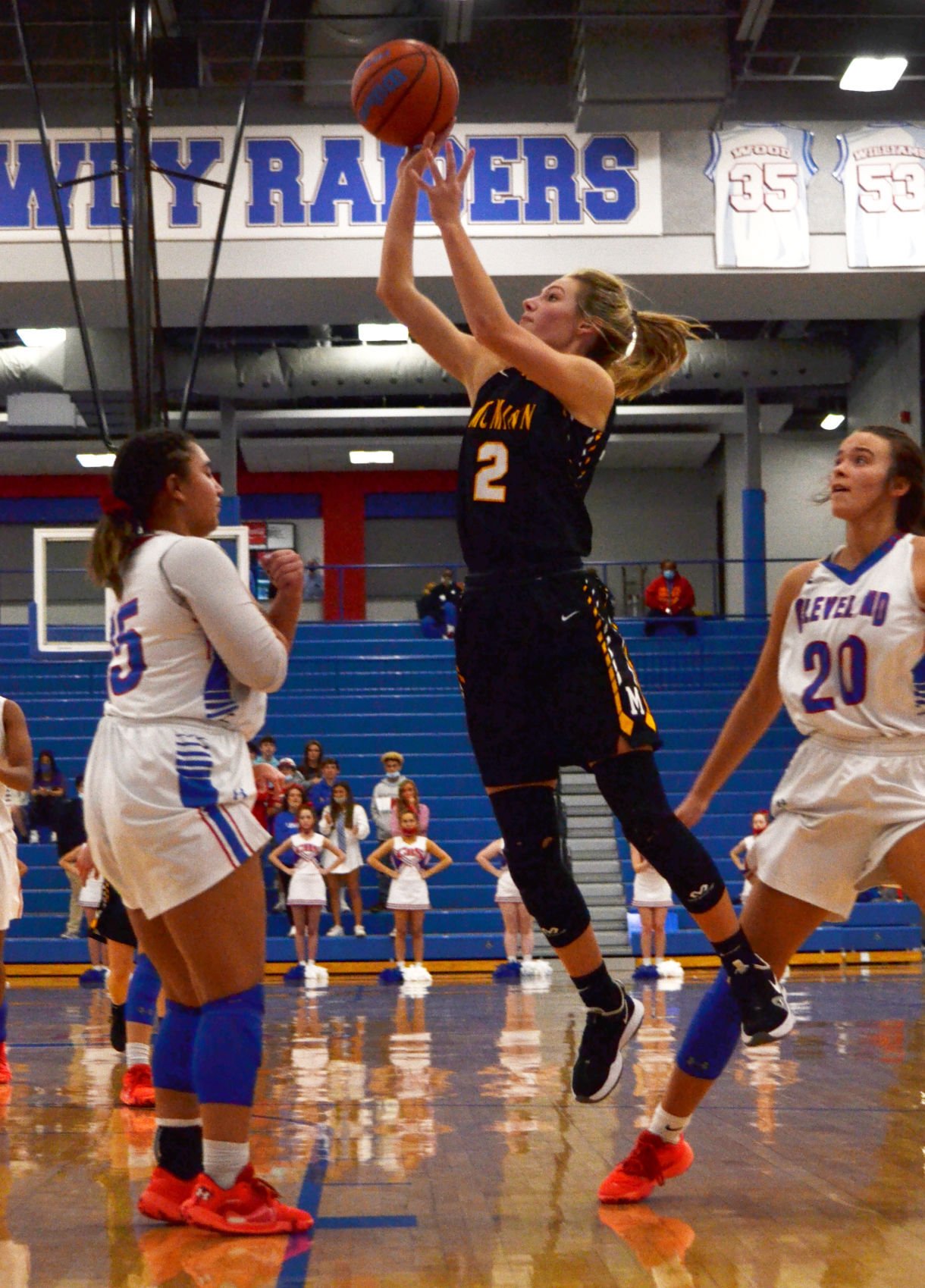 McMinn County’s Brooklyn Stinnett (left) prepares to make a shot while being fouled by a Cleveland defender during the District 5-AAA tournament semifinal Saturday at Raider Arena. Stinnett scored all 12 of her points in the fourth quarter and overtime in the Lady Cherokees’ 56-51 win.

CLEVELAND — With the Lady Cherokees’ upset bid of second-seeded Cleveland appearing to slip away heading into the fourth quarter, Brooklyn Stinnett figured someone needed to step up.

The sophomore quickly decided it would be her.

Stinnett’s steal-and-score was the start of 11 fourth-quarter points that helped lift McMinn County from an eight-point deficit to a 46-46 tie at the end of regulation, forcing the District 5-AAA tournament semifinal in Raider Arena into overtime.

“It just came to me,” Stinnett said. “I really couldn’t tell you why it would be me, but it needed to be done, and I did it.”

A Peytyn Oliver 3-pointer and free throw and an Addie Smith hoop in the paint yielded the Lady Tribe the first six points of the extra period, and Oliver’s two free throws with 2.7 seconds left finished off No. 3 seed McMinn’s stunning 56-51 victory Saturday.

It was the first win by either McMinn County basketball team in Raider Arena since it first opened in the 2016-2017 season, and it came at a perfect time for the Lady Tribe.

“I’m just super-proud of this group of young ladies,” said Lady Cherokees coach Tim McPhail. “We’ve faced a lot of adversity this year, as has everybody, but for them to come here and be a flat-out underdog — because I guarantee you, nobody thought we were going to win this ball game — and we come down here and pull the upset, and I’m just so proud of them.”

Oliver led the Lady Cherokees (12-14) in scoring with 21 points, including four threes. All of Stinnett’s 12 points came in the fourth quarter and overtime.

Smith, meanwhile, was all over the floor offensively and defensively on the way to 19 points, 10 rebounds and six steals — all while sustaining three injuries that stopped play Saturday afternoon. Smith bumped her head in the first quarter, then banged her knee toward the end of the second quarter and walked off the court gingerly with assistance. But she was back in the lineup to start the second half.

“My coaches kept pushing me through,” Smith said. “My teammates kept on me, and I really wanted to win it, so I just kept telling myself I needed to push through.”

Smith scored 11 points and Oliver 12 in the first half, as McMinn led much of those first two quarters before Cleveland (12-8) nudged ahead 30-27 at halftime.

Oliver’s third triple and a Smith swipe-and-score put the Lady Tribe back up 33-30, but McMinn then went cold from the floor, missing its last six shots and also committing four turnovers the rest of the third quarter. That allowed the Lady Raiders to finish the period on an 11-0 run and put McMinn in a 41-33 hole heading to the fourth.

Jamaryn Blair went out with a leg injury for Cleveland late in the third quarter and did not return, but McMinn had both of its post players, Jada Mack and Ama Grimmett, foul out in the fourth quarter.

With both teams short-handed in the final period of regulation, Stinnett continued her outburst with a 3-pointer that sliced the Lady Tribe’s deficit to five. The sophomore then completed a three-point play with three minutes left, bringing McMinn to within 44-43.

“I had to step up,” Stinnett said. “With two posts fouling out and Addie hurt, we needed somebody to step up and do what needed to be done.”

Mariyah Person’s jump shot put Cleveland back ahead by three points, but that was all McMinn allowed defensively the rest of regulation. Stinnett got fouled on a 3-point attempt and made two of the three ensuing free throws, and Smith made one of two from the line after an offensive rebound – which was enough to force overtime.

“We got some stops defensively, and then we had some girls make plays on the offensive end,” McPhail said. “Brooklyn Stinnett makes an and-1, and Addie Smith was everywhere tonight. She was absolutely everywhere, and 50-50 balls, just wanting it more. That’s how we got the job done tonight.”

Person’s trey with 1:11 left in overtime sliced McMinn’s lead to 53-51. Shortly after, Smith was injured again, this time a cut under her eye that sidelined her for the rest of the game.

“I think we’re going to wrap her in bubble wrap Monday night and let her play that way,” McPhail said of Smith.

“What a competitor. I can’t say enough about her.”

Fortunately, the junior will be ready to go in the District 5-AAA championship Monday — but she regretted she couldn’t be on the floor in the final minute of overtime Saturday.

“It was hard not to be out there, and I couldn’t see most of the play because I was on the sideline,” Smith said. “But I’m glad we pulled through and we played hard.”

Stinnett made one of two free throws with 40 seconds left in overtime, putting McMinn ahead 54-51 and increasing the pressure on the Lady Raiders. Cleveland missed two tying 3-point attempts and all four of its last free throws, and Oliver’s final pair from the stripe shut the door.

“It wasn’t clean all the way through, but that’s probably the best we’ve put together for four quarters all year long against a dang good Cleveland team,” McPhail said. “I can’t say enough about my bench players who came in, especially there at the end of the ball game.

“We’re out there with five guards. Both post players fouled out, and Addie Smith goes out with an injury, so we’re out there with a bunch of 5-foot-5 girls and they got the job done. They wanted it more, I felt like, and that’s what we talked about before this game. You’ve got to want this game more. When another team is probably a little more talented than you, you’ve got to want it more than them. And they did.”

The Lady Cherokees will tip off the district title game 7 p.m. Monday at top-seeded Bradley Central. The Bearettes, ranked No. 1 in Class AAA in the final Associated Press state poll, dismissed fourth seed East Hamilton 75-33 in Saturday’s other semifinal.

McMinn will be playing in its first 5-AAA championship game since 2016, a game it lost to Bradley on a last-second shot. The Bearettes have won the last 10 district crowns and have not lost a game to a district opponent since the 2014-2015 season.

“We’ll have our work cut out for us, but it’s one of those things where we just want a shot,” McPhail said. “We want a chance. Because playing for a district championship doesn’t happen every year at McMinn County High School, and that’s what I’ve tried to preach to these girls is that it’s been a while since we’ve been able to play for one. So we’re going to relish it and soak up the moment and we’re going to go down there and take a chance and see what happens.”

With Saturday’s win, the Lady Cherokees will also play their Region 3-AAA tournament opener at home, with possible opponents being White County and Warren County from the opposite District 6-AAA.