The McMinn County Lady Cherokees celebrated their third straight District 5-AAA championship after a 5-2 win over Walker Valley on Thursday at the McMinn County Soccer Complex. 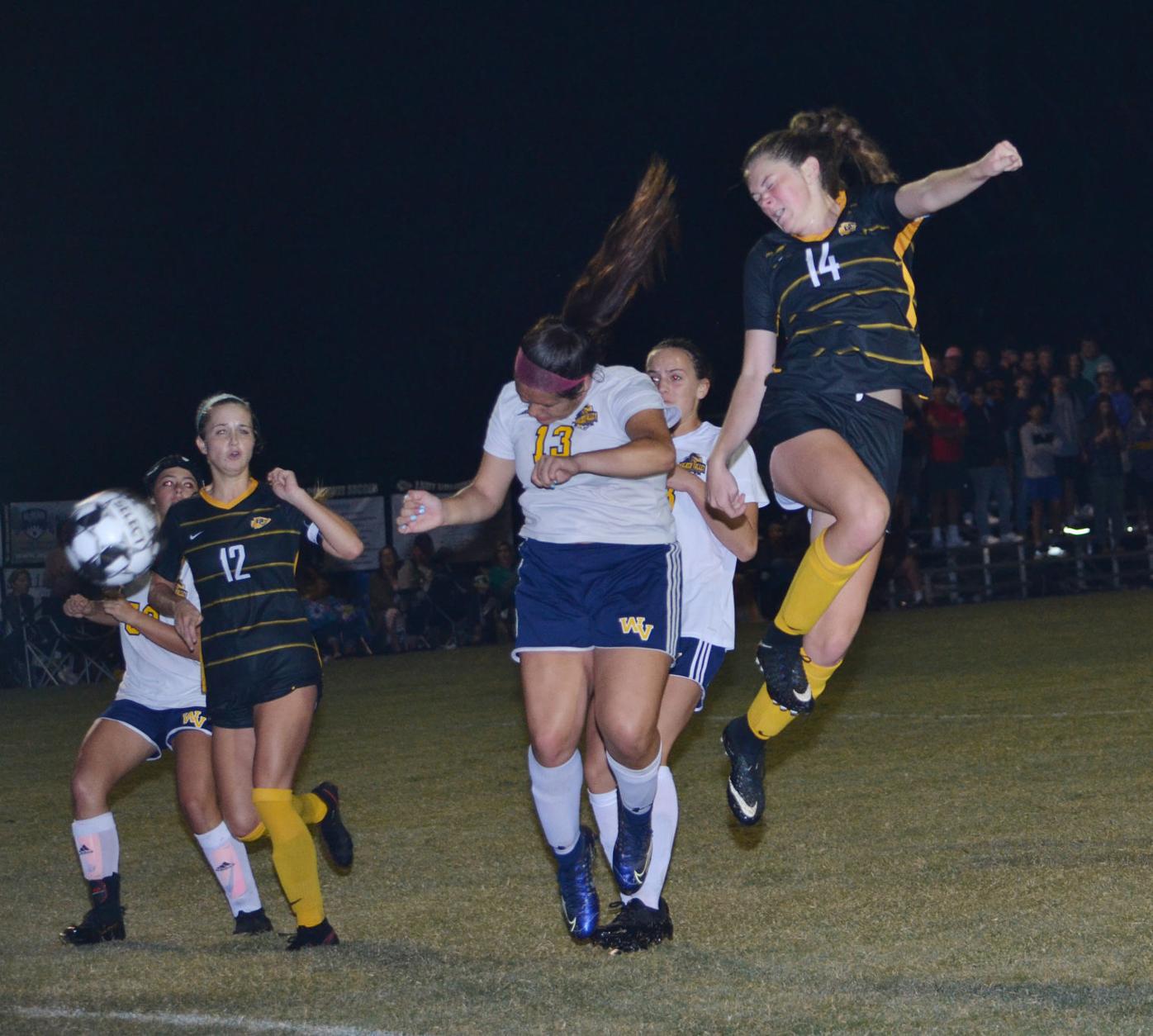 McMinn County’s Allison Hansford (14) follows through on a header off a corner kick for her fourth goal of the Lady Cherokees’ 5-2 win over Walker Valley on Thursday in the District 5-AAA championship match at the McMinn County Soccer Complex. Sydnee Duncan (12) looks on at the play.

This goal was the 88th in Hansford’s career at McMinn, giving the junior the McMinn career record, surpassing previous record-holder Haley Ward (2010-2013). 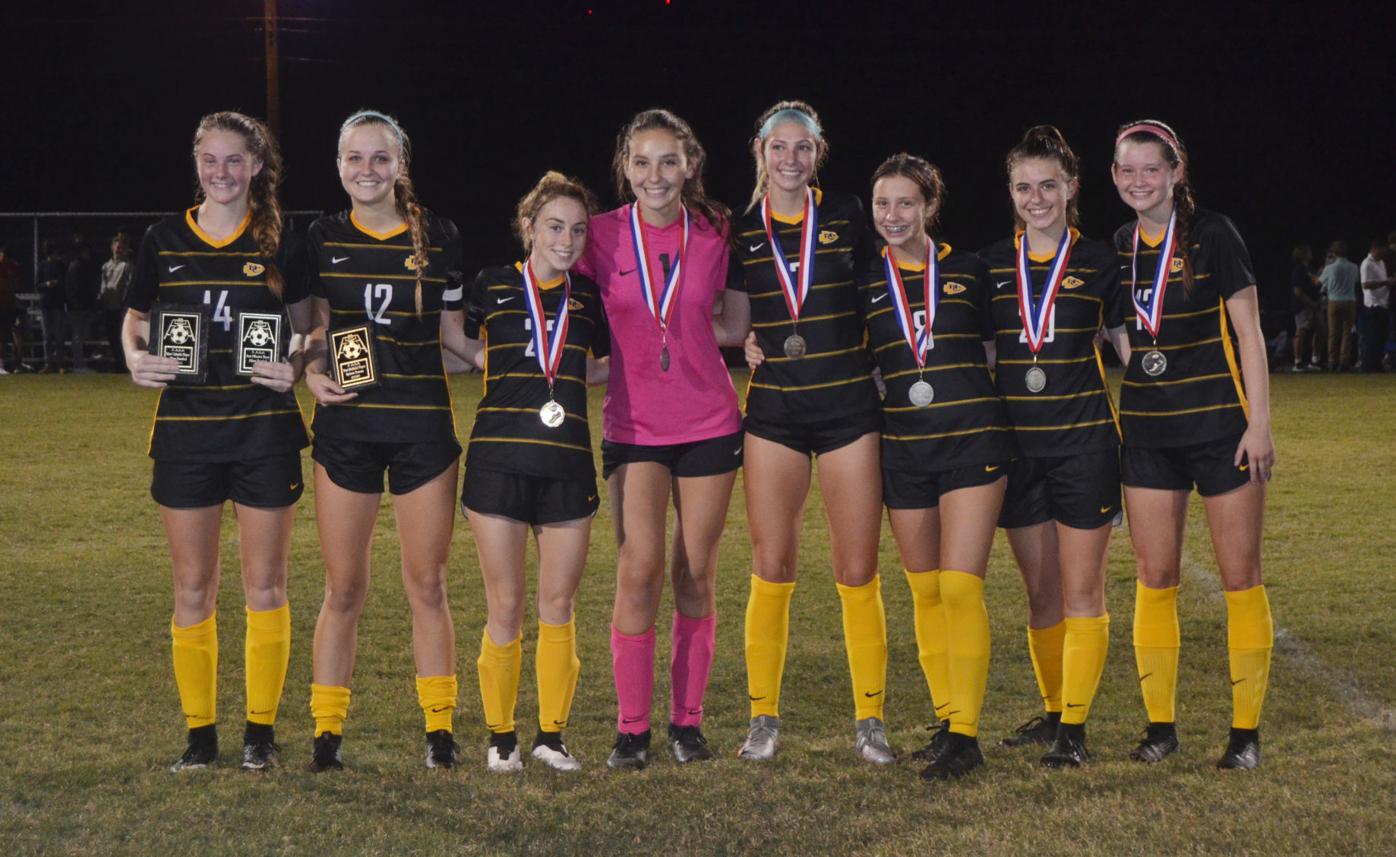 The McMinn County Lady Cherokees celebrated their third straight District 5-AAA championship after a 5-2 win over Walker Valley on Thursday at the McMinn County Soccer Complex.

McMinn County’s Allison Hansford (14) follows through on a header off a corner kick for her fourth goal of the Lady Cherokees’ 5-2 win over Walker Valley on Thursday in the District 5-AAA championship match at the McMinn County Soccer Complex. Sydnee Duncan (12) looks on at the play.

This goal was the 88th in Hansford’s career at McMinn, giving the junior the McMinn career record, surpassing previous record-holder Haley Ward (2010-2013).

A District 5-AAA three-peat for McMinn County, and a dazzling performance and new school record for Allison Hansford.

It seemed like it hardly could’ve happened any other way.

The standout striker sent in four goals, leading the Lady Cherokees to a 5-2 win over Walker Valley in the District 5-AAA championship match Thursday at the McMinn County Soccer Complex.

It was the third straight district title for the Lady Tribe (11-3-1), who have also won four of the last five, and five of the last eight.

“That’s the goal that we set out every year, is to win the district and to give us a chance in the region to keep advancing,” said McMinn Coach Jordan Jacob. “I love this team, and I think we’ve got a shot. As long as we prepare like we should, I like our chances to play well going forward.”

Hansford’s fourth goal, a header of an Addie Smith corner kick with nine minutes left, made the junior the Lady Cherokees’ all-time career leading scorer. It was the 88th goal of her career, moving her past Haley Ward, who scored 87 goals playing from 2010-2013.

Hansford had entered Thursday’s match with 84 goals, so she wasn’t necessarily expecting this would be the night.

“I didn’t think I was going to break it tonight,” Hansford said. “But the game was super high-tempo, so we were moving really fast, and some of the goals were just crosses and one-touch shots.”

And Ward, the previous record holder, had given Hansford some words of encouragement before the district championship game. Ward was a teammate of Hansford’s sister, Arielle, at McMinn.

“It’s not easy to do, so I’m extremely happy for her (Hansford), especially in such a tough tournament,” said Ward in an interview with The Daily Post-Athenian after the game. “I said to her, ‘Basically, just go and do your thing and you’ll get it.’ And it’s a huge accomplishment that tons of people would love to do. But to score that many goals, regardless of who it’s against, I think that’s awesome.

Early on, however, it looked like Walker Valley was the team heading for a big night. Ashley Eulo had crashed on a long free kick into the six-yard box to give a fired-up Lady Mustangs team a 1-0 lead in the sixth minute.

McMinn started wresting control midway through the first half, manufacturing a few opportunities. And it finally paid off when Kyndal Rollo cleared to Sydnee Duncan, who placed a through ball in perfect stride for Hansford’s feet on the run. Hansford’s one-touch finish equalized at 1-1 with 10:25 before the half.

“They came out with a lot of energy and put us under some pressure,” Jacob said. “So they did a good job in that aspect. And I’m going to put that a little on me because we had such a long time off. We maybe should have in practice been prepared for that intensity they came out with. But we were able to find it in the first half and match that. So good job to the girls to respond to the energy they brought.”

The match went into halftime tied, but another Hansford one-touch finish off a Duncan through ball put the Lady Cherokees ahead in the second half’s second minute. Six minutes later, Hansford crashed on a loose ball after a Rollo free kick into the box for a 3-1 lead, which tied her with Ward at the time.

Smith then made McMinn’s lead 4-1 with 13 minutes left, arcing a ball into the goal after taking Kylee Hockman’s pass in stride on a diagonal.

“We made some minor adjustments with how they were playing some of our players, and we just put them in areas where they could be at their best,” Jacob said.

Turns out, Hansford has a knack for setting records against Walker Valley. Last season, she had also set her single-season goals record against the Lady Mustangs in the Region 3-AAA title game. And Hansford considers that a compliment to the Lady Tribe’s fiercest district rival.

Now that the career record is behind her, Hansford can look forward to the rest of the postseason, which she hopes ends in Murfreesboro in the state tournament.

“I don’t have to try to break a record anymore,” Hansford said. “Now I just have to keep scoring, focus on the game and not pay attention to anything else.”

And Hansford still has one full year of high school soccer left to pad her career mark.

“It takes a lot of hard work to achieve that, especially considering she’s just a junior,” Jacob said. “To achieve that already, kudos to her. And my wife (Assistant Coach Madison Jacob) and I were talking the other day, it’s a heck of an achievement for Allison, but it’s also a testament to the entire team and the players that we have around her that are able to get her in good chances to score. And she obviously scores a lot of them. So we need that going forward, and I’m proud of her and the whole team.”

Next for the Lady Cherokees is the Region 3-AAA tournament semifinals, which they will host 7 p.m. Tuesday back at the McMinn County Soccer Complex. McMinn will play Warren County, who lost to Cookeville 3-1 in double overtime of the District 6-AAA title game.

ALL-DISTRICT: Hansford garnered both Offensive and Overall Most Valuable Player honors for District 5-AAA, and Duncan was named Midfield MVP.

Smith, Hockman, Jozlin Small and Grace McDonald were selected to the All-District First Team, and Hooper and Jalen Rymer to the Second Team.