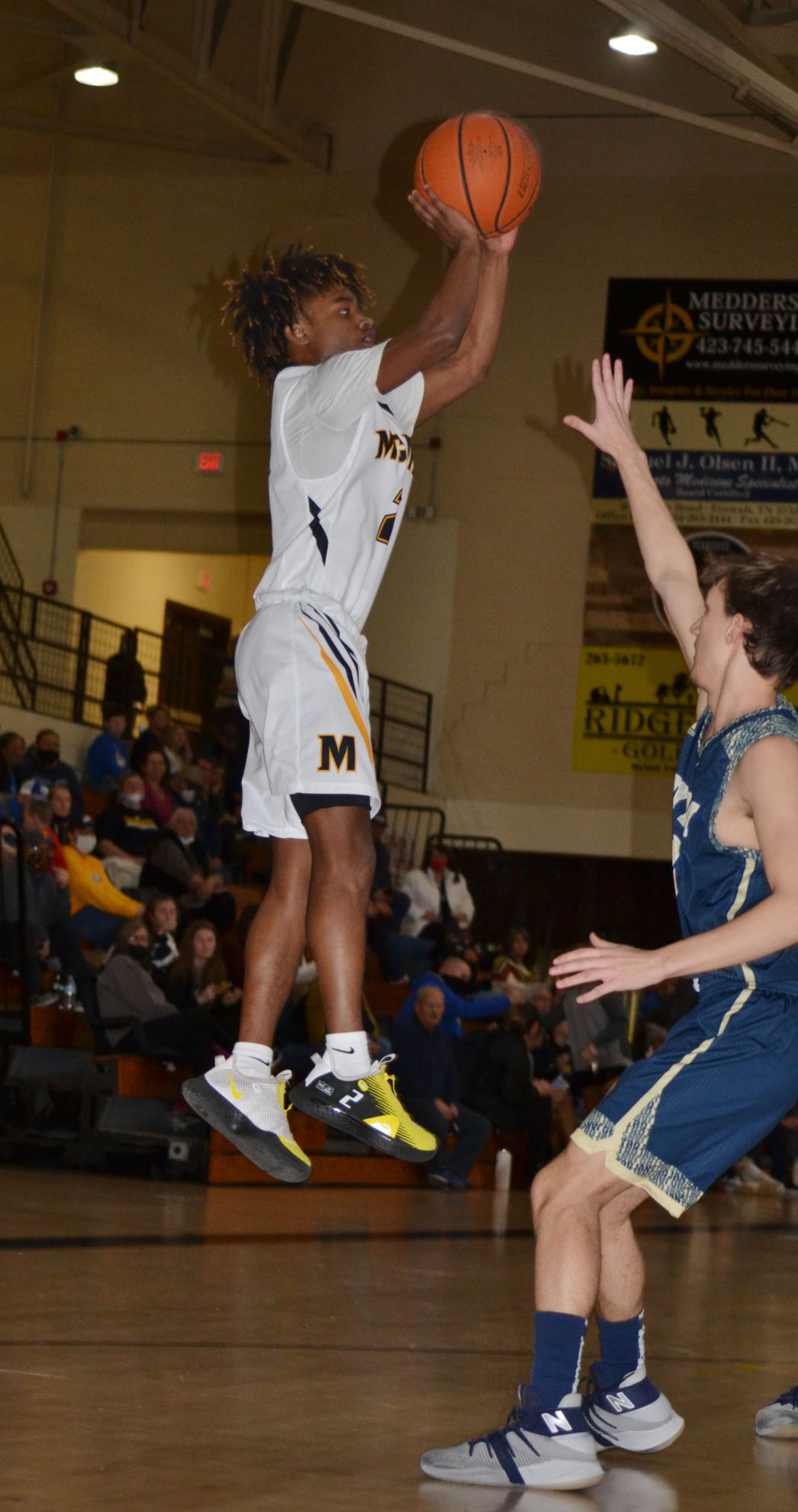 McMinn County’s Davion Evans (2) elevates for a jump shot against Soddy-Daisy on Tuesday at McMinn County High School. Evans led the Cherokees with 15 points in their 74-51 win. 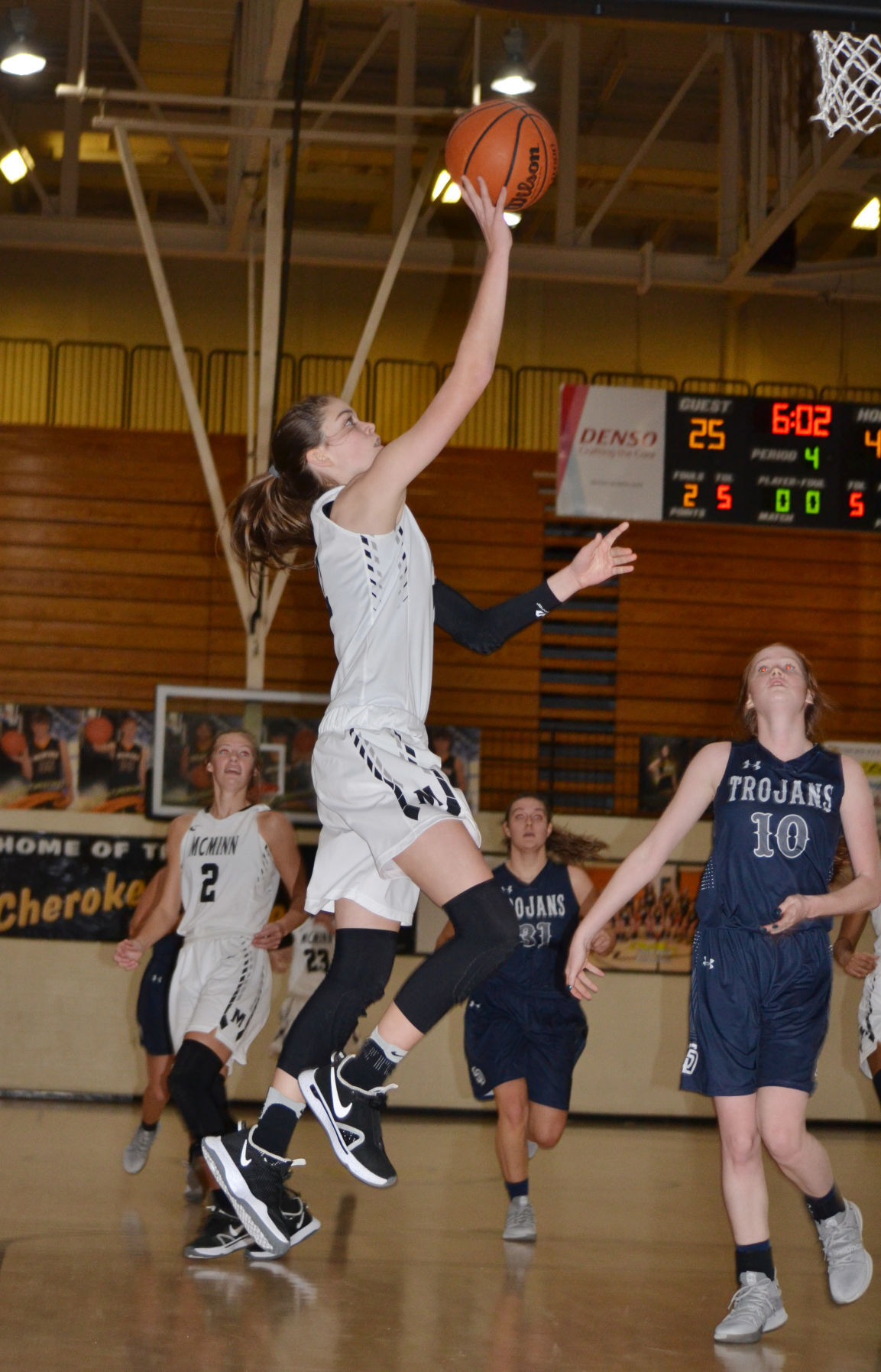 McMinn County’s Davion Evans (2) elevates for a jump shot against Soddy-Daisy on Tuesday at McMinn County High School. Evans led the Cherokees with 15 points in their 74-51 win.

When McMinn County was on its game, Soddy-Daisy was no match. Fortunately for the Cherokees, their good moments outweighed their bad ones.

The Tribe’s second and fourth quarters more than made up for shaky first and third quarters in its 74-51 takedown of the Trojans in District 5-AAA play Tuesday at McMinn County High School.

“I didn’t think we were taking very good shots,” said McMinn coach Ed Clendenen about the first quarter. “I didn’t think they were in the flow. And it just didn’t look right, and we didn’t make anything. And then I think we got, I don’t want to say panicked, but we got a little bit frenzied and we tried to go a little bit too fast and it didn’t work out too good for us.”

Chris Jones drained two 3-pointers off the bench during the Tribe’s massive burst, and Evans, Jalan James and Tucker Monroe also bottomed a triple each during the second quarter.

“Chris Jones gave us a big lift tonight, hit a couple of big threes from the deep corner,” Clendenen said. “Tucker Monroe was very solid once he got his rhythm right there. Donovan Daniel did a great job guarding (Logan) Ricketts. There was a lot of bright spots.”

But McMinn began the third quarter with turnovers on each of their first three possessions, which helped Soddy-Daisy (4-4, 0-3) to a 15-4 run that narrowed the Cherokees’ lead to 40-38 with less than three minutes left in the period.

The Tribe’s starts to both halves left Clendenen “aggravated.”

Andrew Beavers rode to the rescue in the third quarter’s last two minutes, scoring eight of the Cherokees’ 10-2 run to close the period, including two 3-pointers. Frank scored the other two points on a putback. One of Beavers’ threes was a catch-and-shoot off an inbounds pass with a second left to get the Tribe’s lead back up to 50-40.

Beavers made another basket to start the fourth quarter, and Parker Bebb followed with a halfcourt steal leading to a two-handed slam. Evans and Monroe each sank a trey, and McMinn built as much as a 23-point lead, 70-47, with three minutes left.

Evans finished with 15 points to lead the Cherokees, and Beavers with 14 and Monroe 10. Frank and James contributed nine points each. Evans also swiped four steals, and Frank and Daniel each grabbed eight rebounds.

The Lady Tribe (6-9, 4-2) ended the first quarter on an 8-0 run, with an Aubrey Gonzalez deuce and consecutive 3-pointers from Peytyn Oliver and Brooklyn Stinnett producing an 18-8 advantage.

McMinn held the Lady Trojans (2-6, 0-3) without a field goal the entire second quarter and only one made free throw, part of a game-long defensive effort coach Tim McPhail wanted to see. Ten of Soddy-Daisy’s 22 turnovers came in the second quarter.

“For four quarters were were able to have defensive intensity,” McPhail said. “We got a lot of steals and a lot of deflections. And that was obviously the difference in the ball game. The last couple of games, we’ve been able to put together a couple of quarters of that type of effort, and then it seemed like coming out of halftime out of the locker room, we were flat, and we weren’t tonight.”

But for all of the Lady Cherokees’ defensive effort, they struggled building on to their lead thanks to a 3-14 field goal shooting performance in the second period. An Addie Smith swipe-and-score and two Oliver free throws gave McMinn only a 26-9 cushion at halftime.

“I don’t know how many missed layups and point-blank shots we had,” McPhail said. “But we missed enough tonight that on most nights will get you beat. So that is obviously a concern, and we’ve got to put the ball in the hole more often.”

The Lady Tribe led 45-21 after three quarters and by as many as 26 points in the fourth.

Oliver finished with the game-high 19 points and Stinnett with 13. Oliver and Stinnett each made three 3-pointers.

McMinn continues District 5-AAA play Friday at home against Ooltewah. The girls’ game begins at 6 p.m. and the boys’ game at roughly 7:30.