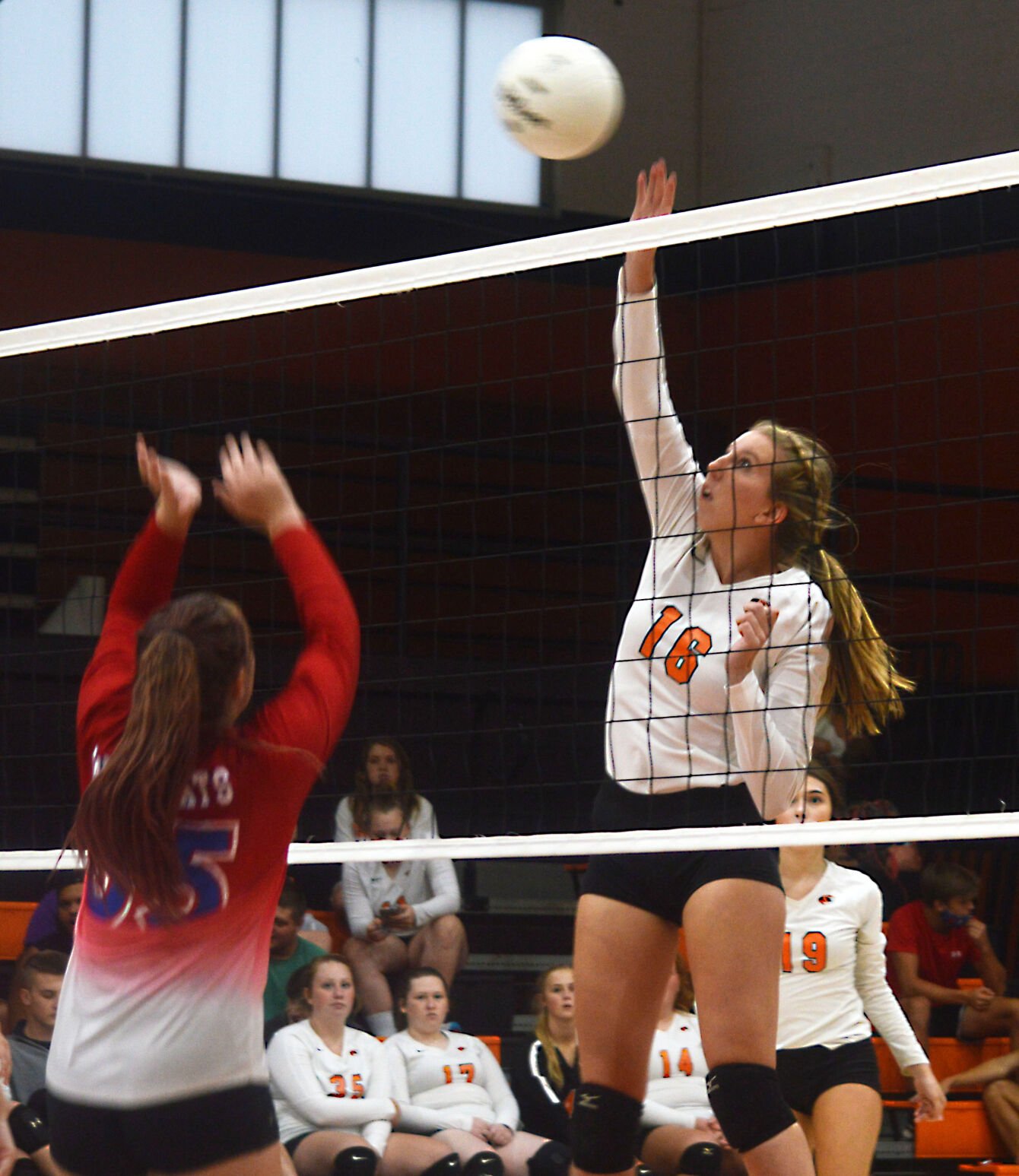 Meigs County's Ella Scott slams the ball back at Polk County during the Lady Tigers' three set victory on Monday.

Meigs County's Ella Scott slams the ball back at Polk County during the Lady Tigers' three set victory on Monday.

“It was an emotional night for these girls,” Meigs Coach Nicole Swafford said. “They started this team. They came out and played like a team and supported one another. The community was great as always and we kept our home winning streak alive.”

In terms of the game against Polk, Swafford said it went about as well as it could go.

“They played great,” Swafford said. “You couldn’t ask for a better night on senior night.”

The Lady Tigers have lost just one home volleyball match and that was in their inaugural season three years ago.

Meigs recognized their seniors before the varsity match. Meigs did not have a volleyball team when they arrived as freshmen and now they have arguably the best volleyball squad in the district.

“This program has come a long way the past few years that we’ve had it,” Stone said. “It’s really new and we’ve accomplished a lot for how little experienced we were. This being our last season here is sad, but we are happy for all the memories we have had here and we hope to go far this season.”

Most of the girls have grown up with each other and that helps them on the court or field, as many of them play softball or basketball as well.

“It think it’s pretty cool because we have all played every sport together and this is just one more to add,” Wade said.

The Lady Tigers are in District 4-A with Copper Basin, Polk, Tyler and Tellico. Chattanooga Girls Leadership Academy and Brainerd are not playing volleyball this year.

Meigs led most of the way and led by as much as seven points, but couldn’t put the Lady Wildcats away.

Miller made a couple of good serves as well as one kill while Stone had an ace and Wade made a kill as the Lady Tigers took a 23-16 lead. Meigs then closed out the match to win the first set 25-18.

The second set was very similar, but was closer. The match was tied 8-8 before Meigs pushed ahead to take a 13-8 advantage with the help of a pair of good serves by Ella Crowder.

The Lady Tigers continued to hold a close lead behind a block by Scott and a pair of kills by Miller.

Polk County started strong in the third set and had a 4-0 advantage, but Meigs soon took a 5-4 lead with Sara Swafford making several bump passes that led to points.

Meigs cruised from there to take the set 25-17 to earn the match victory.