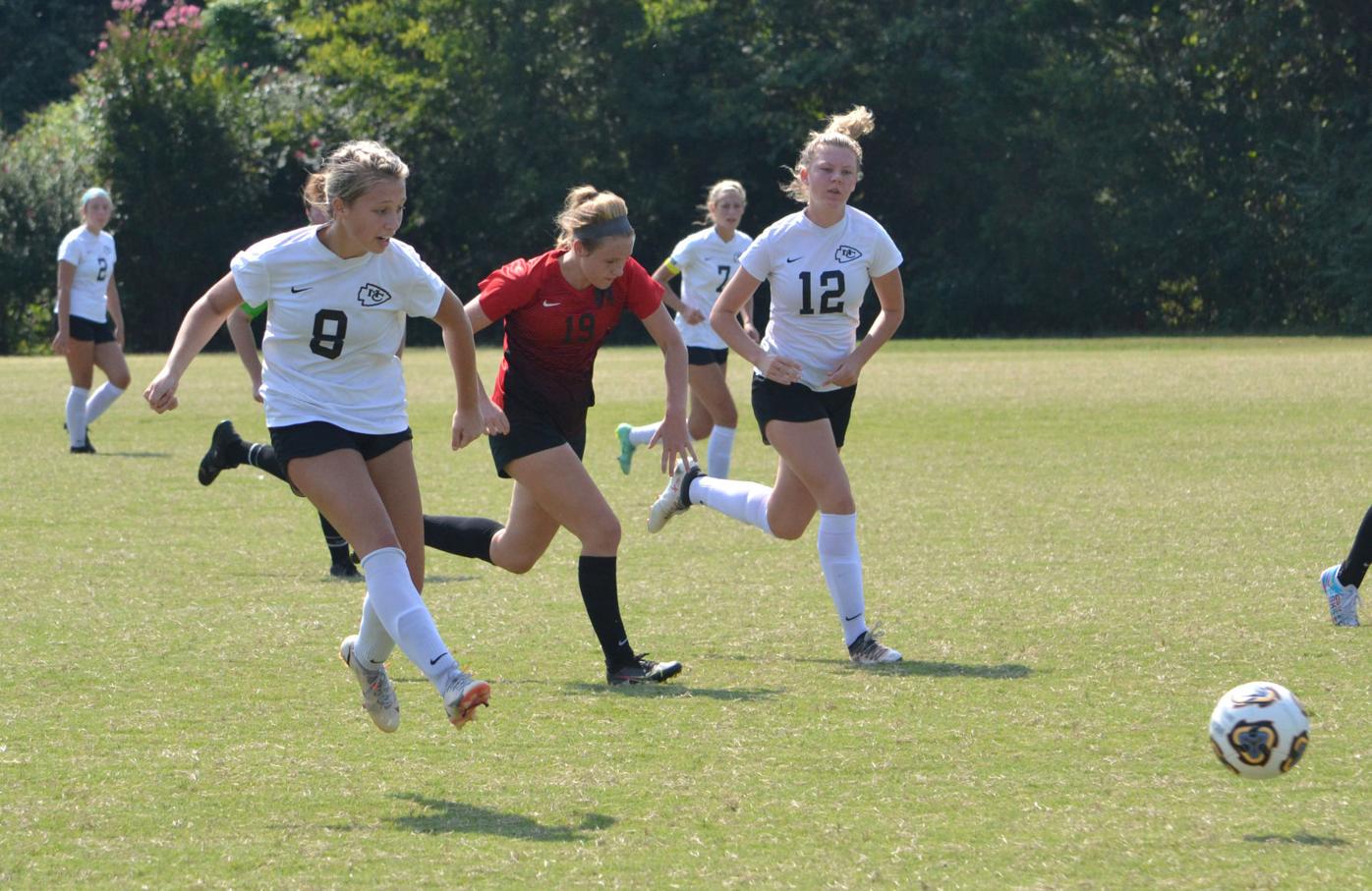 McMinn County’s Kylee Hockman (8) sends a ball up the field for teammate Lexi Lawson (12) to pursue against Maryville on Saturday at the Greater Cleveland Soccer Complex. Hockman and Lawson each scored one goal in the Lady Cherokees’ 3-0 win over the Lady Rebels. 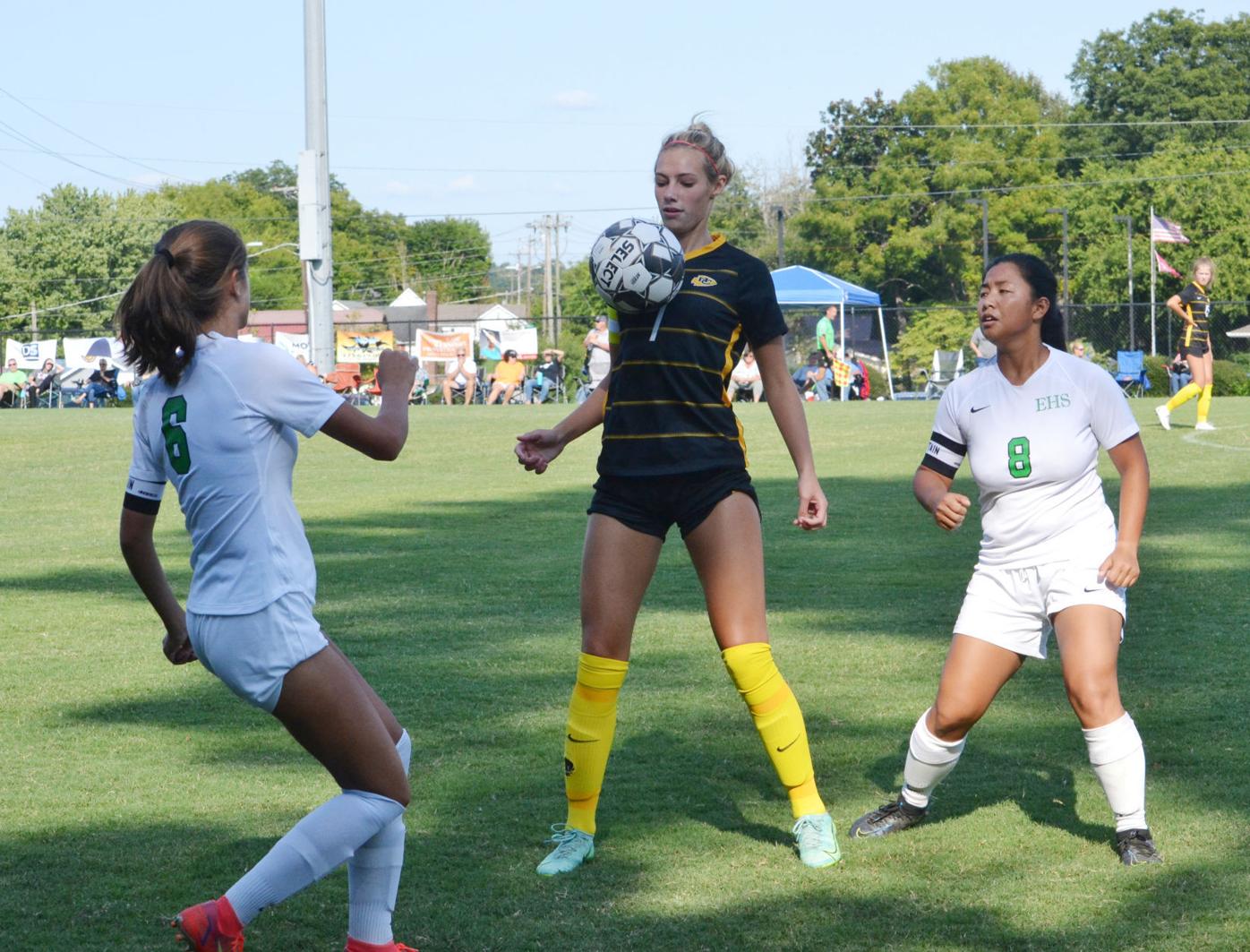 McMinn County’s Addie Smith (7) chest traps the ball between two East Hamilton players during the Lady Cherokees’ 5-1 win in the Cleveland Classic on Friday at the McMinn County Soccer Complex.

McMinn County’s Kylee Hockman (8) sends a ball up the field for teammate Lexi Lawson (12) to pursue against Maryville on Saturday at the Greater Cleveland Soccer Complex. Hockman and Lawson each scored one goal in the Lady Cherokees’ 3-0 win over the Lady Rebels.

McMinn County’s Addie Smith (7) chest traps the ball between two East Hamilton players during the Lady Cherokees’ 5-1 win in the Cleveland Classic on Friday at the McMinn County Soccer Complex.

CLEVELAND — If McMinn County was experiencing any fatigue, it didn’t show it this weekend. Instead, it showed a will and an ability to win against two high-caliber opponents.

Wrapping up a stretch of four games in five days, the Lady Cherokees picked up two sound victories in the Cleveland Classic over teams who were in the TSSAA state tournament last season. The Lady Tribe (6-2) took down East Hamilton, the 2020 Class AA state runner-up, 5-1 on Friday at the McMinn County Soccer Complex. McMinn then wrapped up its grueling week by outlasting Maryville 3-0 in a battle between two of last year’s Class AAA state tourney squads on Saturday at the Greater Cleveland Soccer Complex.

“It’s what the girls, the hard work they did through the preseason and through the course of the season, it shows that we are a capable team when we can put everything together,” said McMinn coach Jordan Jacob. “And that these girls believe in themselves.”

The Lady Cherokees get two much-needed days off before playing their last two District 5-AAA games of the regular season this week. McMinn will kick off 7 p.m. Tuesday at home against Bradley Central for senior night, and then take a trip to Walker Valley for a 5 p.m. start Thursday.

“They’ve definitely earned some rest over these next couple of days heading into our last district games next week, so kudos to them,” Jacob said.

Lawson added her first score, and McMinn’s second, in the 22nd minute, taking a pass on the run from Hansford and keeping control through contact before the finish.

East Hamilton threatened a goal at 15 minutes before halftime on a counterattack with numbers and a McMinn goalkeeper overcommitting, but the shot rolled wide right of the frame.

Hansford made the score 3-0 in the second half’s opening minute after drawing a foul in the Lady Hurricanes’ 18-yard box and converting the penalty kick. Lawson sent in her second goal with 28 minutes left in the game, bumping in a Hansford cross. One minute later, Hansford scored again, cleaning up on a shot from Smith that an East Hamilton defender deflected.

A McMinn own goal on an East Hamilton corner kick spoiled the shutout effort with 15 minutes left.

The Lady Cherokees built a 26-15 overall shot advantage, 17-5 on goal. East Hamilton’s seven first-half shots were all off frame. The Lady Hurricanes did have a 4-2 edge on corner kicks.

McMINN 3, MARYVILLE 0: Hansford punished an overcommitting Maryville keeper on a breakaway in the 24th minute for the game’s first goal.

The Lady Rebels, who were without All-State star striker Kayla Barr due to illness, still pressured McMinn’s goal much of the last 10 minutes of the first half and the first 10 minutes after halftime.

“Absolutely, they were still dangerous (without Barr),” Jacob said. “They created tons of scoring opportunities, so our defensive group to still handle all of that pressure and not concede a goal, that was big for us.

“I’ve talked about that the past couple of games, not conceding a goal, and we gave up a couple late in those games. And I guess it didn’t matter, but it gives us confidence against those better teams that we can defend and win those games.”

After weathering Maryville’s stretch of pressure, the Lady Cherokees began controlling possession more, and Kylee Hockman cleaned up after the Lady Rebel keeper saved Lawson’s initial shot, heading the ball into the goal to put McMinn up 2-0 with 23 minutes left. Two minutes later, Lawson got her goal and made it 3-0, lasering in the line drive after Hansford slipped a pass right at her feet.

McMinn finished with a 18-15 edge on overall shots, 10-8 on goal. Bella Hooper picked up eight saves for the Lady Cherokees in goal. Maryville did end up with 10 corner kicks to the Lady Tribe’s two.