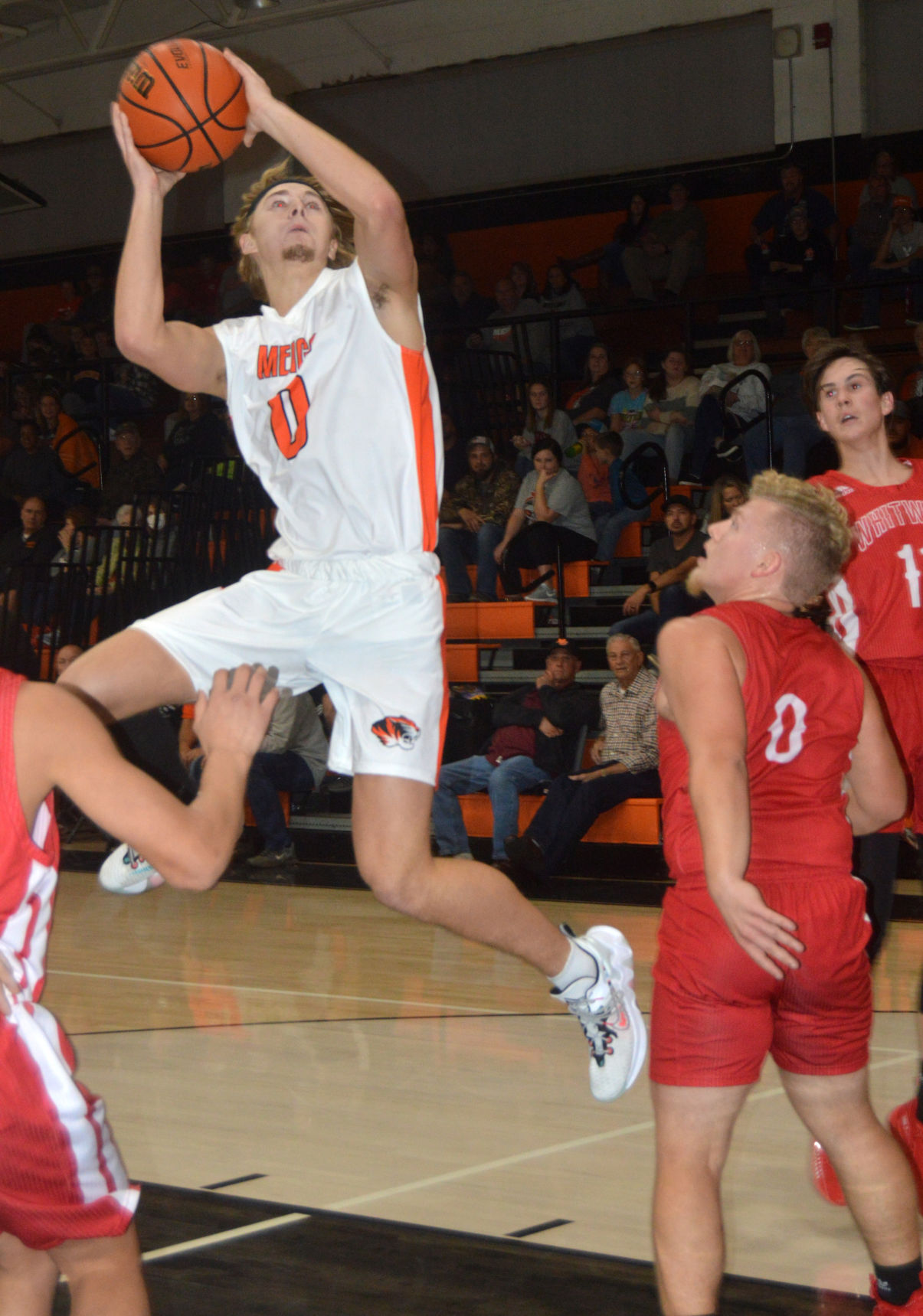 Meigs County’s Cole Owens attempts this shot in the lane during the Tigers’ 88-13 demolition of Whitwell on Friday night. 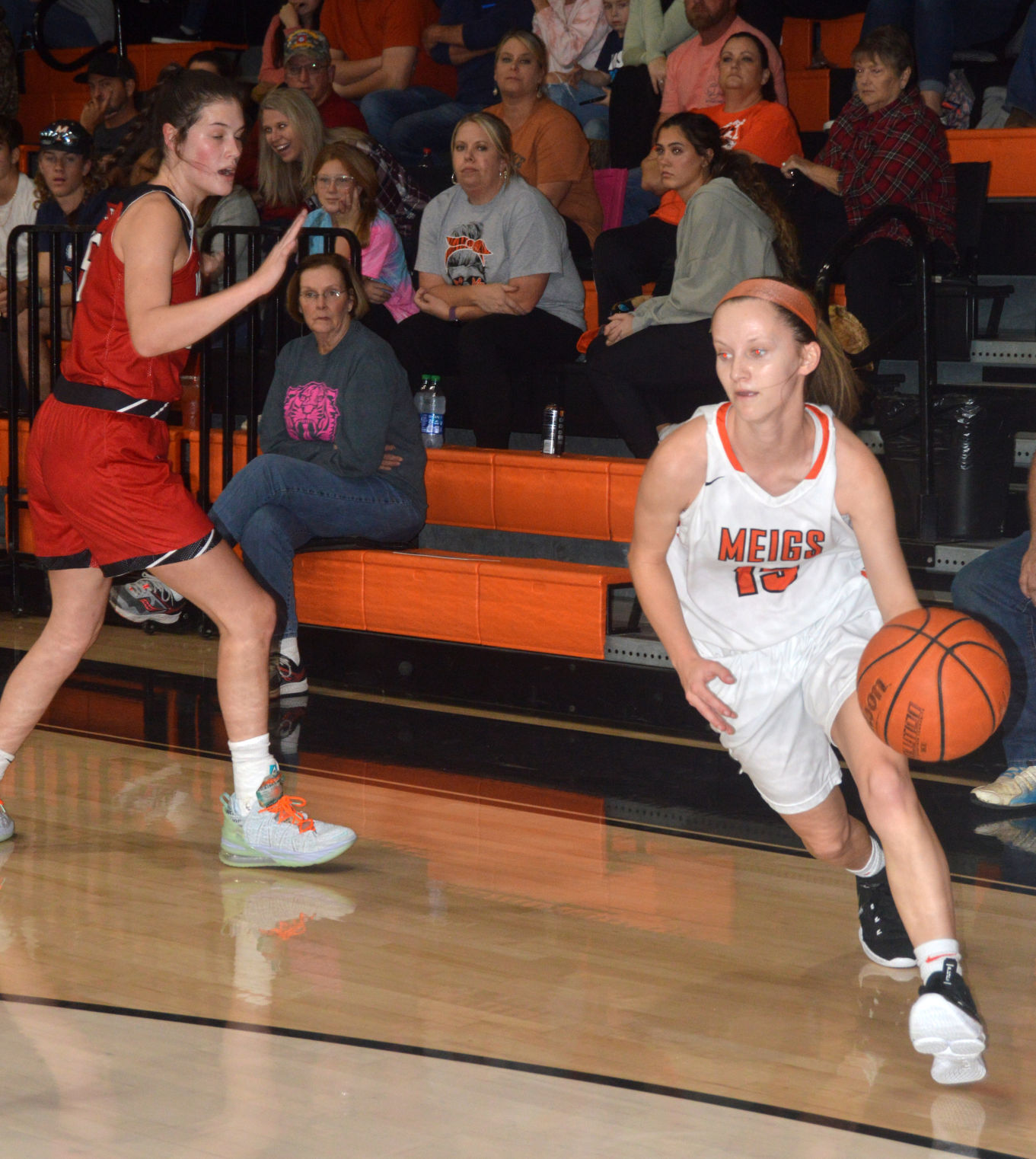 Meigs County’s Cayden Hennessee drives by a defender during the Lady Tigers’ 45-34 loss to visiting Whitwell on Friday.

Meigs County’s Cole Owens attempts this shot in the lane during the Tigers’ 88-13 demolition of Whitwell on Friday night.

Meigs County’s Cayden Hennessee drives by a defender during the Lady Tigers’ 45-34 loss to visiting Whitwell on Friday.

DECATUR — It was an almost embarrassingly easy night for one Meigs County basketball team and a frustrating one for another on Friday.

A look at a basketball legend may have helped the Tigers as Coach Sammy Perkinson had his team watch highlights of former Celtic and Hall of Famer Larry Bird.

“I wanted to show them how to share the basketball,” Perkinson said. “Here is Larry Bird making passes and sharing the ball. I want my guys to get just as excited about making an assist as they are scoring. And, despite the type of game it was, I thought they shared the basketball better than they have all year.”

The game was already out of hand after the first quarter with the Tigers holding a 28-6 lead. Whitwell had six players out due to sickness, so Whitwell was very much shorthanded.

“As a player, you love games like this. As a coach, you try to not let it get out of hand,” Perkinson, who substituted liberally and used a lot of zone defense, said. “But sometimes a game like this is good, the kids enjoy it.”

The Lady Tigers, however, did not enjoy their game on Friday. They were down by as much as 13 points in the first half before cutting that deficit down to eight. But they could never string together a few baskets to make a serious run. Giving the ball away 20 times didn’t help either.

“We have to do the little things right and not turn the ball over. We have to be ready to play every single time we play. We can’t have a night off.”

That said, Jenkins hopes her team will see what they need to do to get better.

“We have to move on,” she said. “We have to use this as a learning experience. We have a big district game coming up so we have to learn from this and be ready to play on Friday. But I know my girls will work hard and I think we are going to be OK.”

TIGERS 88, WHITWELL 13: It was apparent early on that it might be a good night for the Tigers as they jumped out to an early 6-0 lead on two free throws by Payton Armour and two buckets by Ethan Meadows.

Then Meadows dunked on a breakaway that energized the crowd. Cole Owens then scored a bucket and hit a 3-pointer, followed by a trey by Levi Caldwell to put Meigs ahead 18-2 with 3:40 left in the first quarter.

Things just got worse for Whitwell, who had just seven players. DaQuawn Tatum and Caldwell scored for the Tigers in the remaining portion of the period and Meigs went to the second quarter ahead 28-6.

Meigs’ defense allowed only one bucket in the second quarter and the offense kept rolling with Matthew Boshears, Owens, Alex Schaumburg, Landon Thomson, Caldwell and Tatum all scoring in the period. The Tigers led 53-8 at halftime.

It was more of the same to start the third quarter with Caldwell scoring 13 of Meigs’ 14 points to start the period to make it 67-8. Then came two buckets from Meadows and one from Owens. The scoring for Meigs continued and a running clock began late in the period.

Meigs led 73-11 going to the fourth and cruised to a 75-point victory.

Meigs had five players in double figures and 10 players score. Caldwell led the Tigers with 14 points, followed by Owens, Meadows and Tatum with 13 points each and Armour with 11. Meigs hit six 3-pointers with Armour hitting a trio of threes.

WHITWELL 45, LADY TIGERS 34: The Lady Tigers didn’t score until 2:10 left in the first quarter when Talley Lawson scored on a trey. But then Meigs was down 7-3 and went to the second period behind 13-3. Meigs turned the ball over four times in the opening quarter.

Meigs went down 18-5 in the second period, but ended the quarter on a 7-2 run. Lawson and Cayden Hennessee each hit a free throw and then Kaydence Schaumburg hit a bucket and a free throw. Lainey Fitzgerald then hit a three to make it 18-12 before Whitwell ended the run to go ahead 20-12 with 3:33 left in the half.

Neither team scored again over the next three minutes with both teams missing some easy buckets. Meigs went to the half trailing 20-12.

Hennessee scored one bucket and Lawson added two baskets as Meigs stayed in the game, down only 24-18 with 2:44 left in the third. Free throws by Whitwell made it 28-18 and then a single free throw by Sara Swafford made it 28-19 going to the fourth quarter.

Whitwell then pushed their lead out to 38-22 with 4:16 left to play. A pair of buckets by Hennessee and a three-point play by Julia Howard made it 41-29, but the Lady Tigers simply couldn’t find enough scoring down the stretch to become a threat in a 45-34 loss.