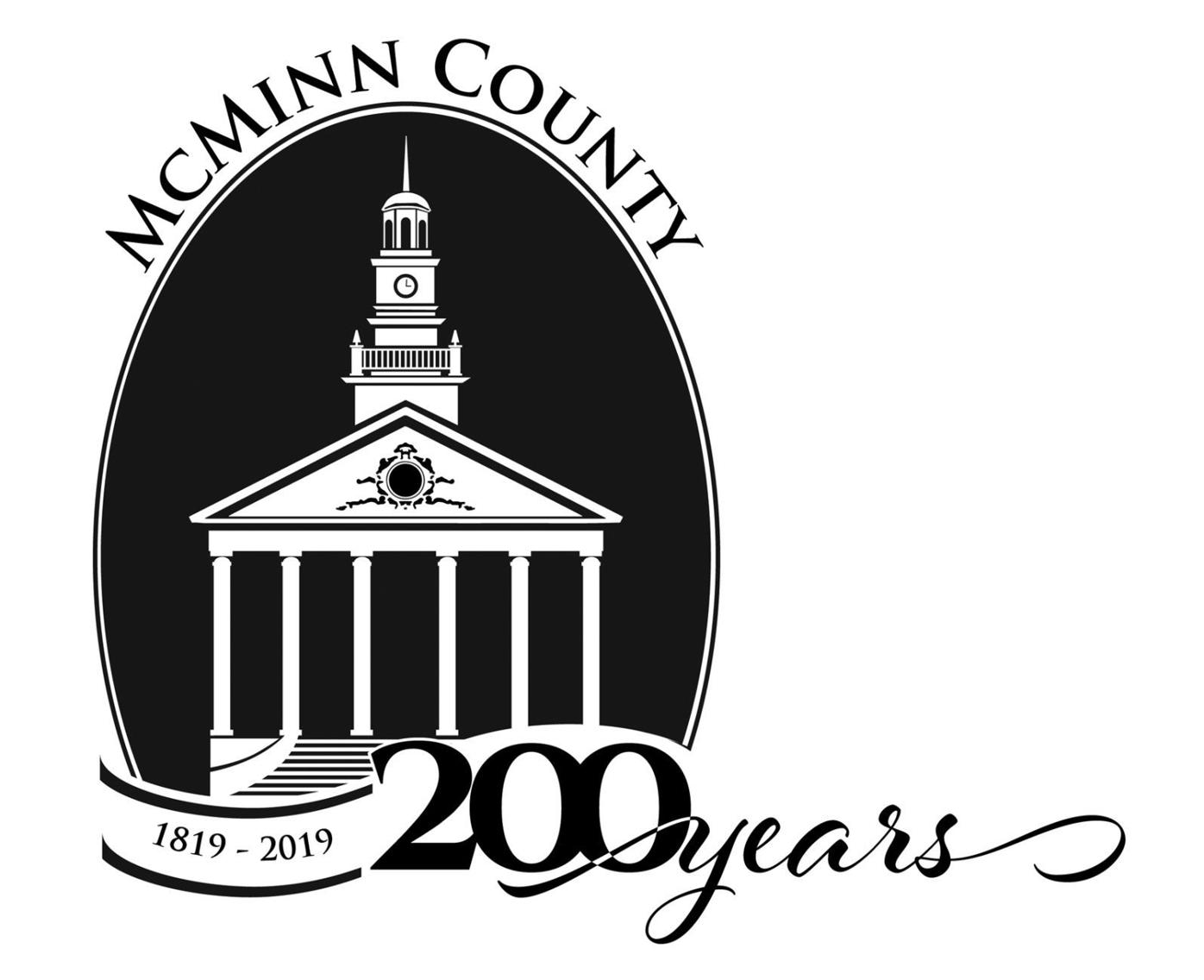 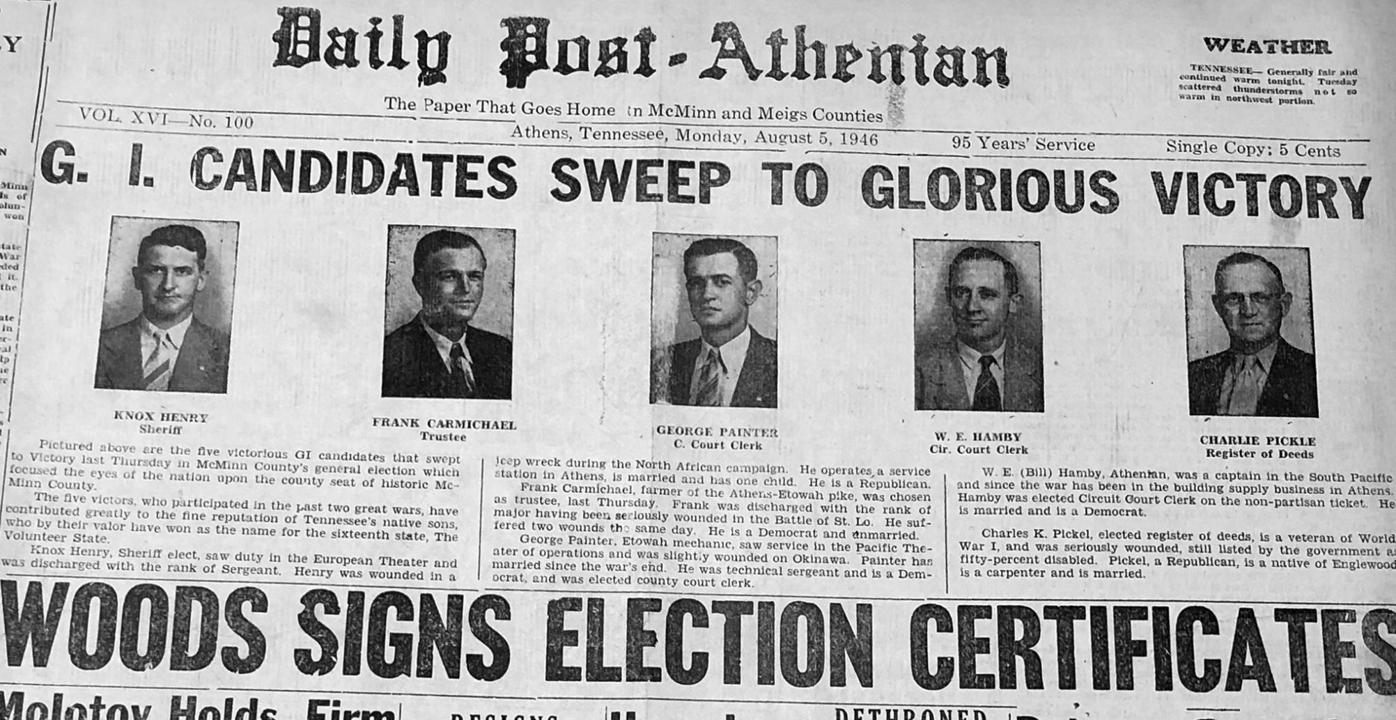 Shown here are the GI candidates who took office following the Battle of Athens on Aug. 1, 1946.

Shown here are the GI candidates who took office following the Battle of Athens on Aug. 1, 1946.

A detailed listing of events during the Battle of Athens was laid out 73 years ago in the pages of The Daily Post-Athenian.

Thursday was the 73rd anniversary of the historic battle in Athens and coverage in The DPA was extensive for an extended period following the Aug. 1, 1946, event.

In the Monday, Aug. 5, 1946, edition of The DPA, a listing was given of what happened and when it took place in the period leading up to and the days following the battle itself.

On that historic Thursday, Walter Ellis was removed as the GI judge from the first precinct at the courthouse at 9:30 a.m.

Following that, Tom Gillespie was shot — reportedly by Windy Wise — at the 11th precinct on North Jackson Street at 3 p.m.

After Gillespie was shot, at 3:15 p.m., Bob Hairell, a GI judge, was “beaten by Minis Wilburn officer of the election, 12th precinct” on North White Street.

The polls closed leading up to the fateful election at 4 p.m. and the paper reported that tensions were “high at 11th precinct, Athens, where Charles Scott Jr., and Ed Vestal, GI watchers were held virtual prisoners by armed deputies.”

Thirty minutes later, at 4:30 p.m., Sheriff Pat Mansfield and “two carloads of deputy sheriffs” took to the streets of North Jackson Street to patrol the area.

Fifteen minutes after that started, Scott and Vestal were reportedly able to escape from where they were being held by “breaking plate glass door and running gauntlet of deputies with drawn pistols while crowd of several hundred seethe with anger but can do nothing against guns.”

At 4:55 p.m., Mansfield and his deputies reportedly took the ballot box from the 11th precinct and moved it into the McMinn County Jail.

More than half an hour later, at 5:30 p.m., “angry GIs using bare fists round up seven deputy sheriffs, work them over and haul them out of town.”

The GIs then began gathering at their headquarters on East Washington Street at around 7:30 p.m., according to that day’s paper.

They stayed there until 8:45 p.m., when the GIs began to march on the jail in order to retrieve the ballot box. However, they were “refused and fired upon.”

That day’s DPA reported that the battle officially began at 9:10 a.m. and would be waged at the jail until 3 a.m.

The end came when the “jail was dynamited” and the deputies surrendered and then were “marched before the crowd, returned to jail cells for safety by GIs” at 3:30 a.m.

The deputies were released by 9 a.m. and then the crowd dispersed when asked at 10 a.m.

At 4 p.m. that Friday, a three-man commission was chosen as the governing body during a meeting at the courthouse. “Volunteers by hundreds offer assistance in setting up government framework,” the paper reported.

From then until 5 p.m. that Saturday, “curious crowds mill streets as the new government cleans up ‘hot-spots.’ Beer sales banned. Town is orderly.”

Tensions rose again that Saturday, however, as a rumor began to float around with a “newspaper story from Knoxville” that members of the former power structure in the area might “attempt to storm Athens.”

While nothing ever came of that, from 5 p.m. to 7 p.m., “fifteen hundred citizens pour into Athens with firearms to back the new government. Telephone calls from neighboring cities pledge aid if needed in defense of the town.”

Mansfield eventually resigned as sheriff at 5 p.m. that Sunday, Aug. 4, and then Woods signed the election certificate at 10 a.m. that Monday.