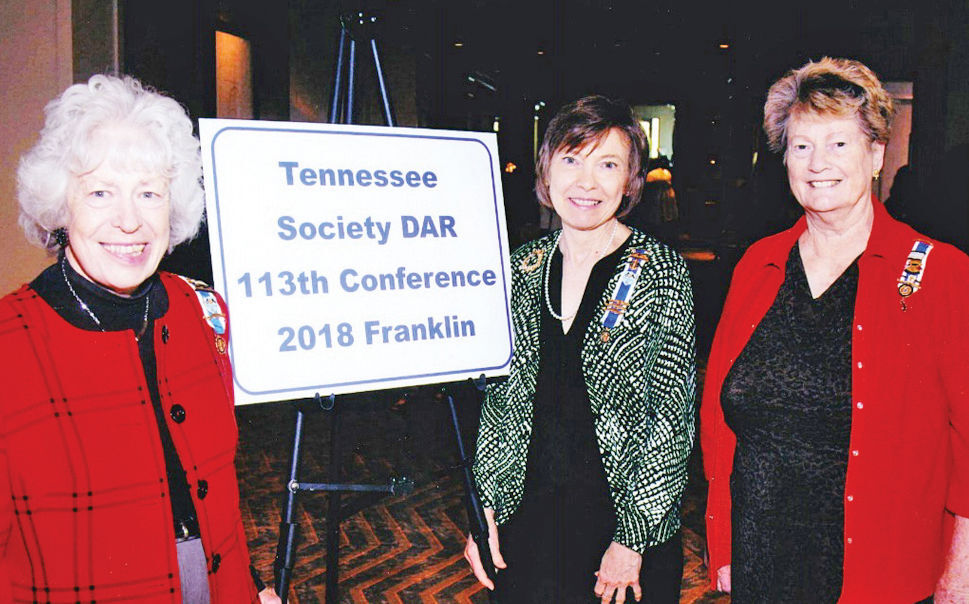 Clare Nell Breeden was a former member of the Alexander Keith Chapter of the Daughters of the American Revolution. She is shown here (left) with fellow DAR members at the state conference in 2018. 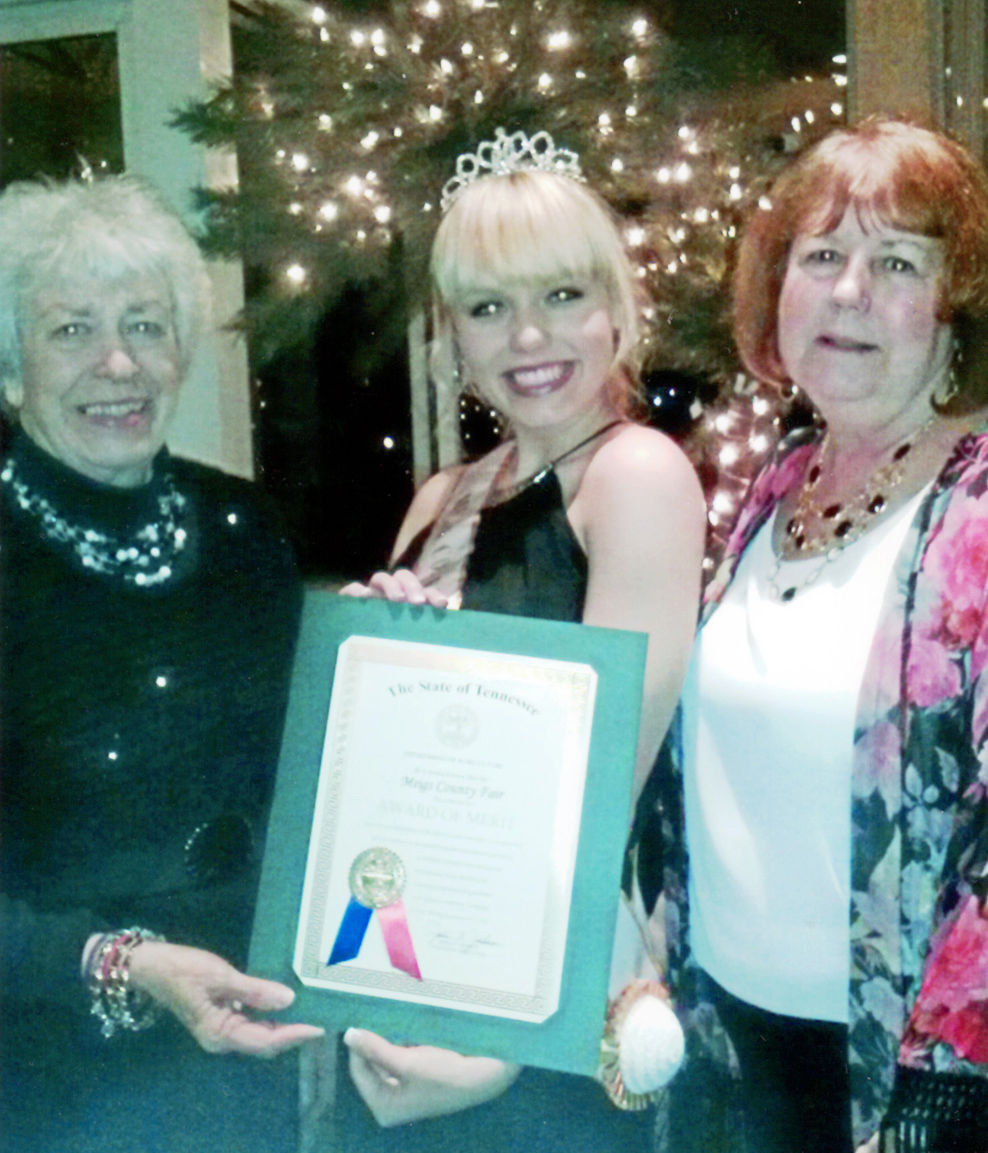 Clare Nell Breeden (left) was heavily involved with the Meigs County Fair, as shown here when, while serving as a delegate to the Tennessee Association of Fairs, she was one of three people to accept a certificate of merit on behalf of Meigs County.

Clare Nell Breeden was a former member of the Alexander Keith Chapter of the Daughters of the American Revolution. She is shown here (left) with fellow DAR members at the state conference in 2018.

Clare Nell Breeden (left) was heavily involved with the Meigs County Fair, as shown here when, while serving as a delegate to the Tennessee Association of Fairs, she was one of three people to accept a certificate of merit on behalf of Meigs County.

A woman described as the “heart” of Meigs County passed away over the weekend.

Clare Nell Breeden passed away on Sunday at the age of 76 in her home, while surrounded by family and friends.

She was the daughter of the late Russell and Nannie Thomas Chandler and a member of Decatur First Baptist Church, which she had been a member of for 55 years.

Breeden was a graduate of Dresden High School and the University of Tennessee at Martin.

She grew up in the New Salem community of Weakley County before moving to Meigs County in 1966 where she served as the U.T. Agricultural Extension agent and later became the first female extension leader in the State of Tennessee.

Breeden was noted as an active leader and volunteer in the Meigs County Fair Association, American Cancer Society, Daughters of the American Revolution and numerous other organizations

Members of the University of Tennessee Ag Extension Office for Meigs County extended their thoughts on Breeden after her passing.

“Our office is heartbroken at the loss of our greatest advocate,” the members said in a statement. “Even though Clare Nell was retired, she remained a constant source of leadership and volunteerism for Meigs County Extension and the agriculture community.”

They described Breeden as the “heart” of Meigs County and community education clubs.

“4-H’s biggest supporter and a key to the Meigs County Fair, Clare Nell was recognized in the community as the definition of a public servant,” the statement continued. “Her wealth of knowledge of the agriculture community, family and consumer science and University of Tennessee Extension will be greatly missed. We were constantly inspired by her positive attitude and her heart for the Lord. She was always thinking of others even when facing her own battles. Our hearts and prayers are with her family and all those who loved her.”

“Clare Nell was just a wonderful lady, I can’t even think of the words to say to describe just how great of a person she was,” Cable said. “I’ve never met a more positive person in my life than Clare Nell, even after all of her long battle with cancer she never had a negative word to say about anything. She was just a lovely lady, she loved her community, she loved the Lord and she was the perfect example of somebody that we should all strive to be.”

Cable noted that Breeden had been associated with the fair for around 40 years.

Cable extended his and the fair association’s sympathies to Breeden’s family for their loss.

“She’s such a wonderful person and we are going to miss her dearly,” he said. “She was family to us, she loved all of us and we loved all of her. We will all miss her and we want to extend our sympathy and our gratitude to Clare Nell for all that she did, not just to the fair association but the FCE in Meigs County, Meigs County 4-H, and UT Extension. She has touched the lives of kids in the county and they probably wouldn’t be who they are today if it hadn’t been for Clare Nell.”

“She was one of the best ladies that I have ever met in my life,” James said. “She was just somebody special. She loved this county, though she didn’t grow up here. She raised her family here and she was very active in our county. I couldn’t say enough about her, even when she was very sick she was always friendly and always had a smile on her face. She was just a very special lady.”

Breeden’s impact on others was also remembered by a local resident.

“She became my mom’s 4-H agent in 1970 when my mom would have been around 10 years old,” said English Roberts. “She remained a part of her life and my mom died when I was two years old. Clare Nell felt that personal responsibility to continue my mom’s memory and wanted to make sure that when I became old enough that she introduced me to 4-H.”

Roberts stated that she became a 4-H officer, just like her mother had, due to Breeden’s guidance.

“She helped pushed me on to all different kinds of scholarships, she helped me get into UT and she just maintained her friendship with our family the whole time,” Roberts stated. “She has basically been a part of our family for 50 years this year and she was like an extra grandparent to me.”

She stated that Breeden had been a pillar of strength and guidance to her.

“She showed me a sign of unconditional love, something that she didn’t have to do,” Roberts expressed. “She helped shape me into a community minded and service minded type of person that otherwise, without her, I would not have been able to become that person. She never had a negative word to say about anybody. Through good and bad she always had a smile on her face. She was always trying to put others before herself. She was just a good mother and grandmother figure for me.”

A funeral service will be held on Friday, July 30 at 10 a.m. at Decatur First Baptist Church. Her obituary can be viewed in full on Page A3.