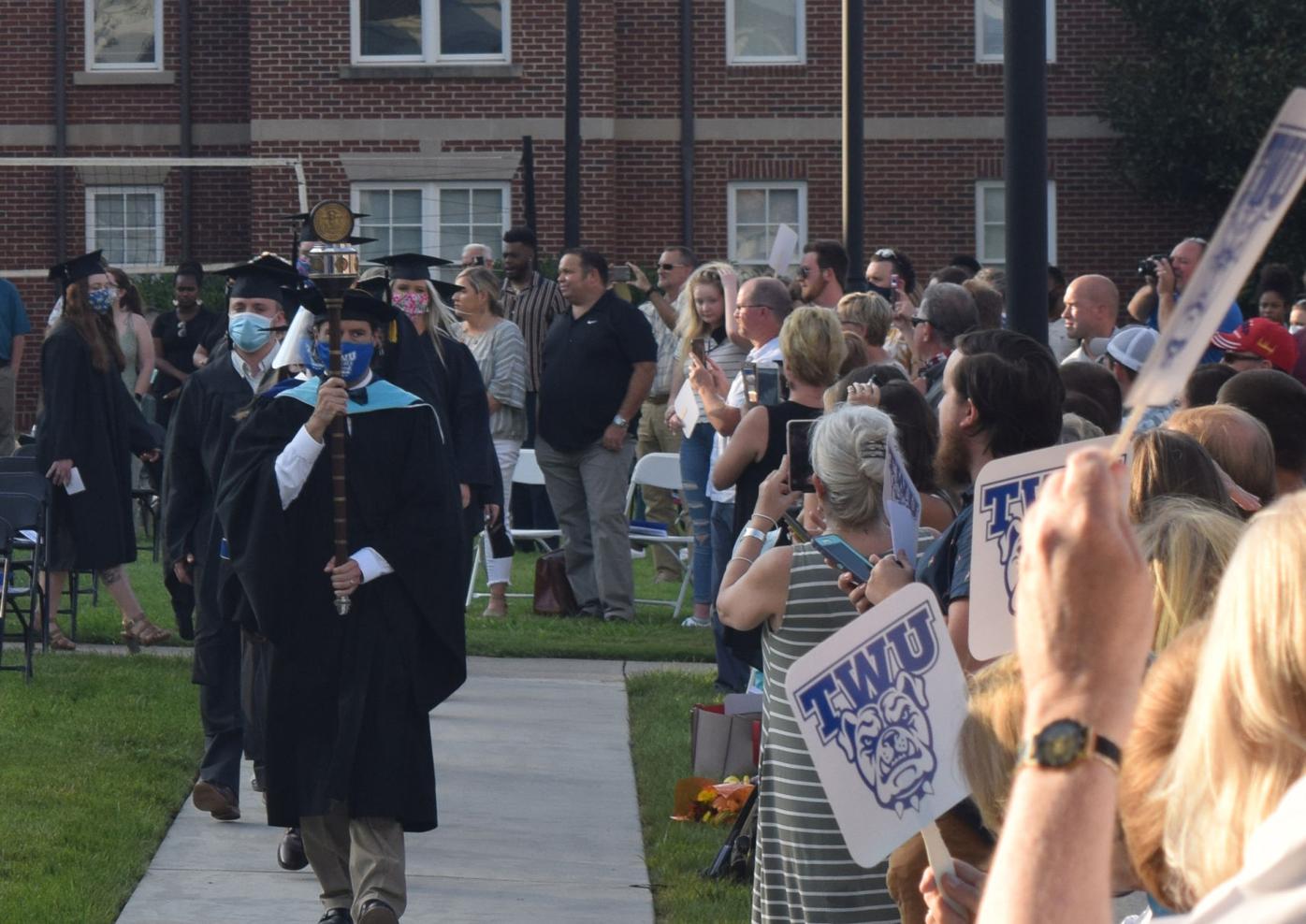 Shown here is the processional of graduates walking in during Tennessee Wesleyan University’s commencement ceremony Friday. 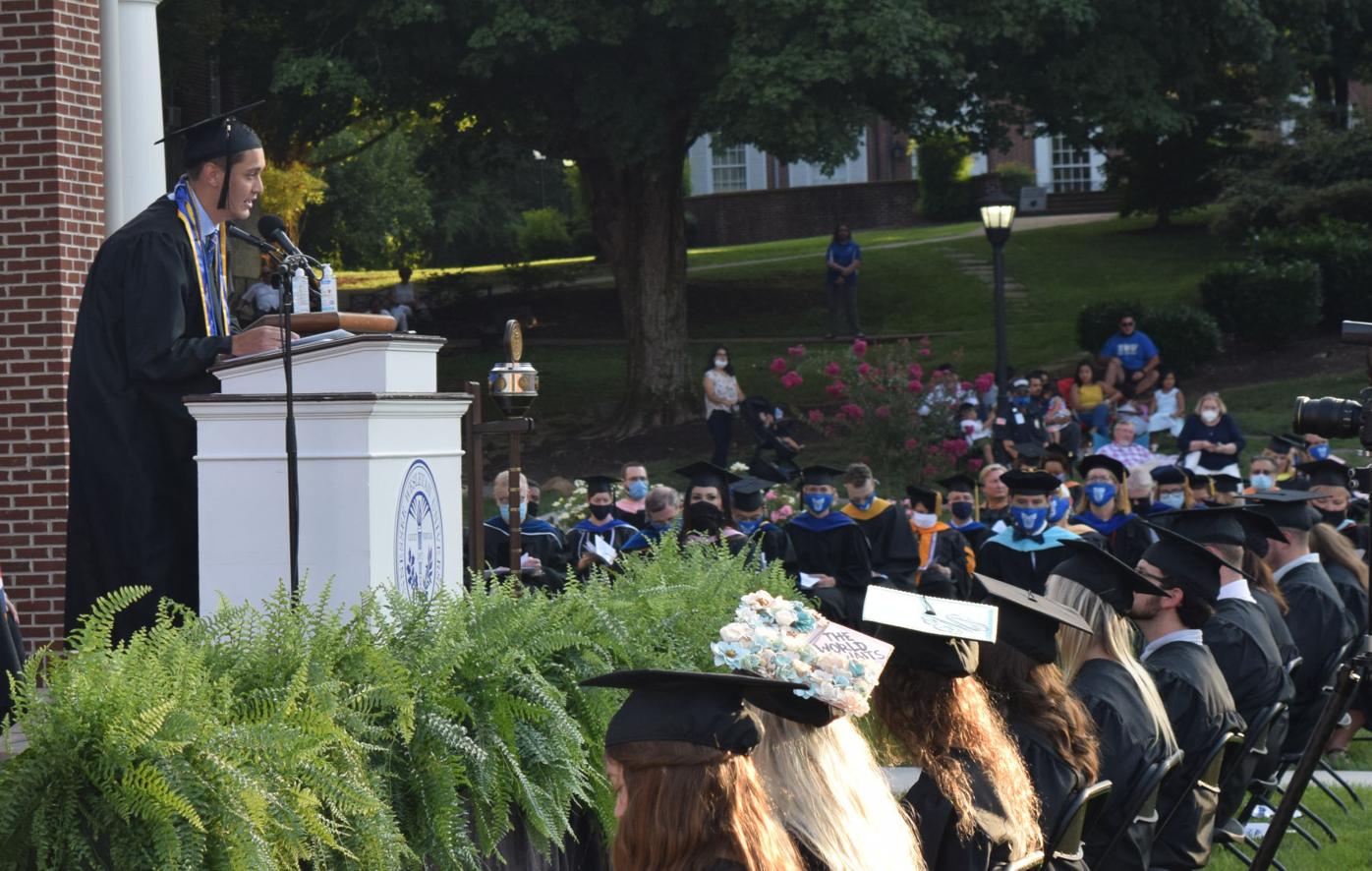 Shown here is the processional of graduates walking in during Tennessee Wesleyan University’s commencement ceremony Friday.

While it was a bit delayed due to the coronavirus pandemic, the commencement ceremony for spring Tennessee Wesleyan University (TWU) graduates still took place Friday night.

The university combined the spring alumni with the summer graduates for a large ceremony in front of the Colloms Center.

The introduction to the ceremony was delivered by TWU President Dr. Harley Knowles, who welcomed those in attendance before introducing the commencement speaker.

“It is an honor this evening to present to you, as our commencement speaker, a young man who needs no introduction on the Tennessee Wesleyan campus,” announced Knowles. “This individual began his studies at Tennessee Wesleyan in the fall of 2016 and has been an inspiration to many of us for his perseverance, strength and in spirit of optimism. Please give a warm welcome to our featured speaker, Mr. Kyle Blassingame.”

Blassingame lost a leg in a wreck in South Carolina in 2019 that claimed the life of one of his classmates, Lane Lusk.

According to a report from the Charleston County (S.C.) Sheriff’s Department at the time of the wreck, the incident stemmed from a traffic stop on a stolen vehicle, in which a 16-year-old suspect reportedly fled and subsequently collided with two other vehicles.

“I am honored to stand in front of you all as the 2020 speaker tonight. Graduation is only a couple of months late, much like 20 of us graduating tonight that were a couple of minutes late for our 8 a.m.s,” said Blassingame. “These past four years have been fun but difficult. It has also been exciting but heartbreaking. It has been filled with assignments, exams and hard work, however it has also been filled with joy, laughter and lifelong friendships.”

He discussed the activities he and his fellow graduates will miss, such as “the infamous lip sync,” ice cream Fridays and cheering on the sports teams.

“After these four years we have all earned the label as a graduate, but what does being a graduate truly mean,” inquired Blassingame. “These past several years have taught us a massive amount of information, life lessons and shaped us into who we are today. There is so much more meaning behind the word graduate than eight simple letters.”

He then explained what each letter in the word “graduate” stands for to him: being Grateful, Responsibility, Achievements, Determination, Unique, Adaptability, Transformation and Empathetic.

“These words not only relate to everyone here but share a special meaning to me after the past year of my life,” Blassingame said. “It is a true testament to the word miracle that I am able to walk on this stage tonight and physically stand after my life was almost taken one year ago.”

He shared his story with the audience of how he and Lusk were involved in the traffic accident on July 29, 2019.

Blassingame suffered from 18 broken bones and later an amputation above his right knee as a result of an infection brought about from the accident and his friend lost his life.

“This journey in my life has taught me more life lessons in this past year about myself than the rest of my life has,” Blassingame stated. “A lot of the things I learned come from those eight words that resemble graduate to me. I have learned to be grateful for those small things in life, such as having the ability to walk by yourself ... because in one blink of an eye those abilities may be taken away from you.”

He stated that the graduates have now reached a point where they can ask what is next for them and where they will work.

“I can personally say that I don’t know, but that is perfectly OK because what I do know is that I will live my life to the fullest, do the things in life that make me happiest and taking every day as a blessing,” Blassingame said. “I want to end on saying a certain motto and quote that has resonated with me throughout my entire journey. That ‘no hardship, challenges or struggles in life define who you are but what does define who you are is how you carry yourself through those hardships, challenges and struggles.’”