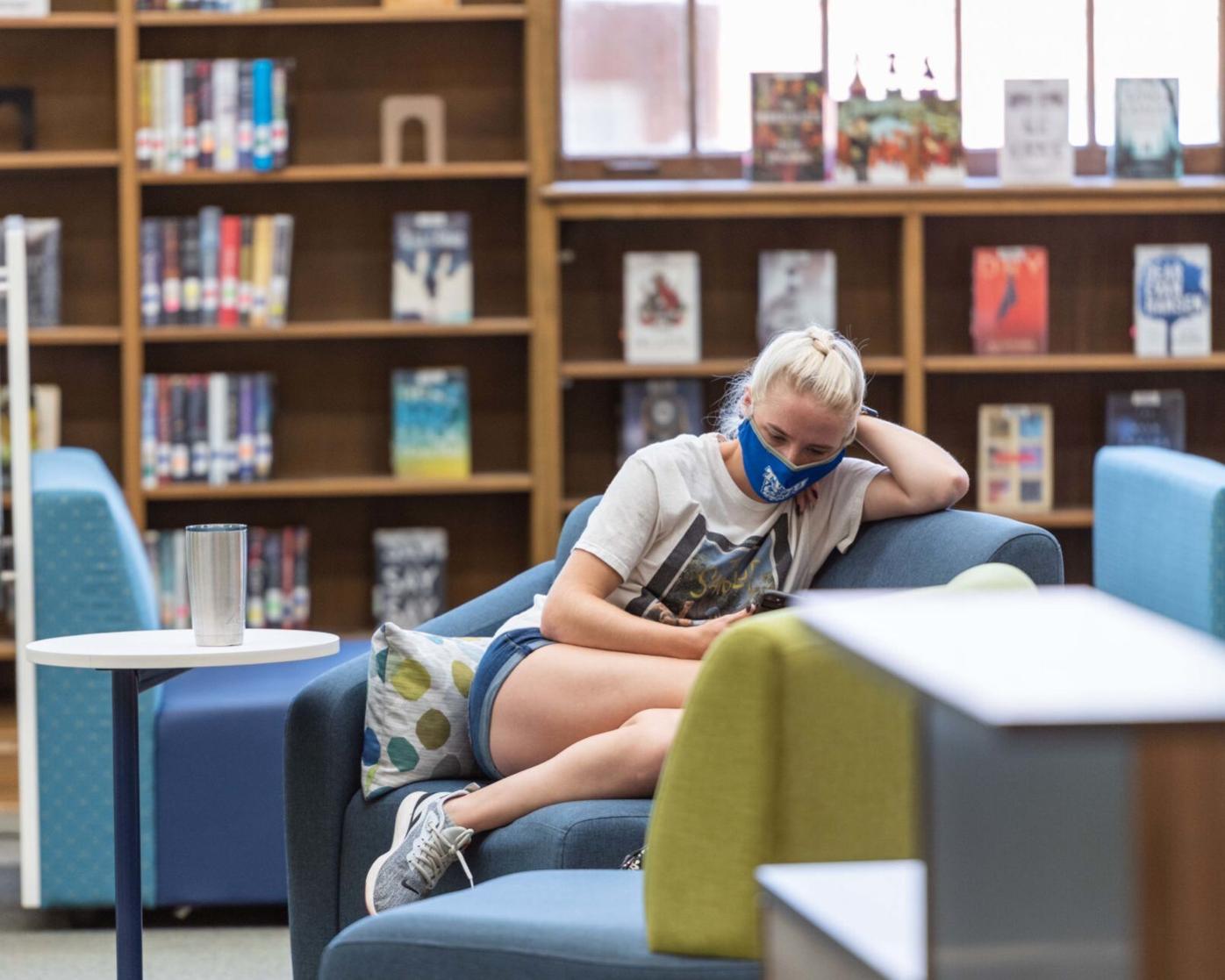 Shown here is a masked student in the library at TWU recently. 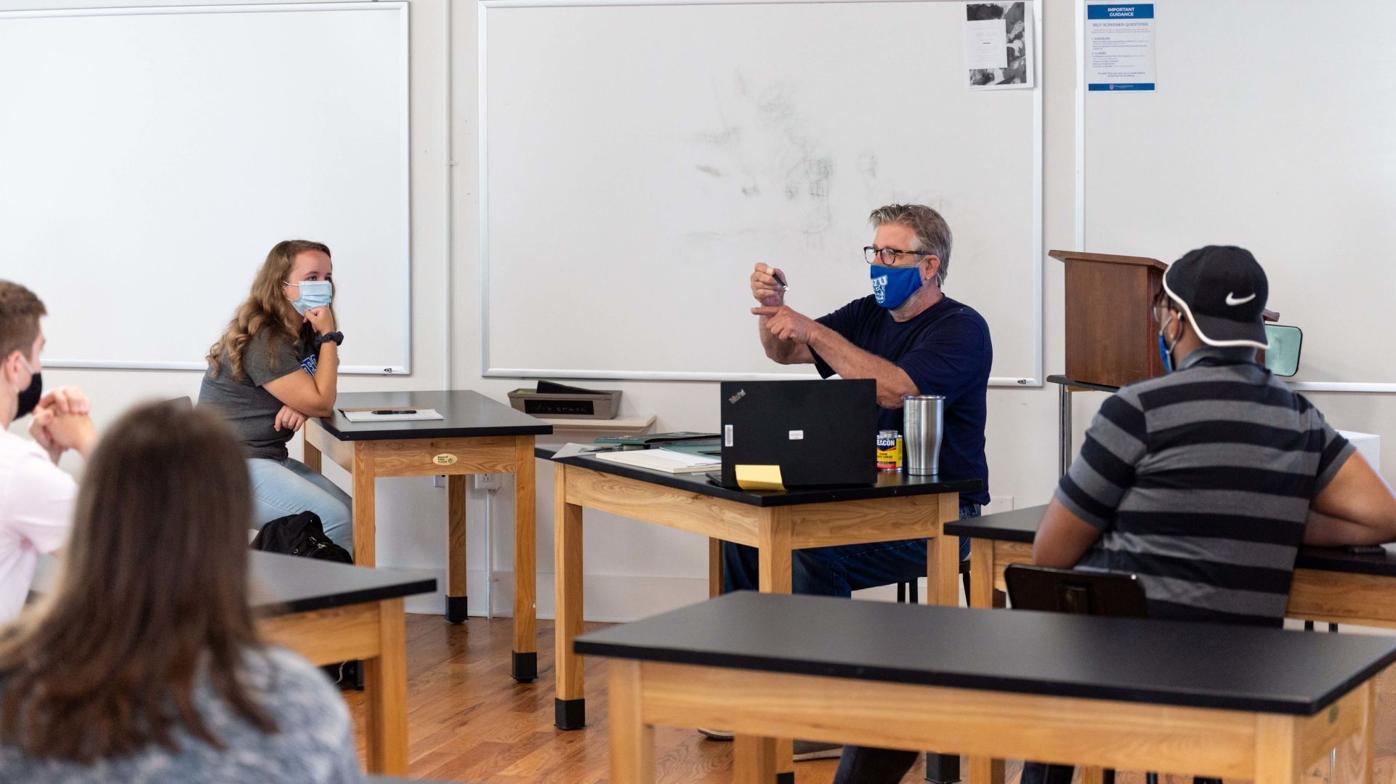 Masks have been worn by students and faculty members in and out of class since coming back for the fall semester at Tennessee Wesleyan University.

Shown here is a masked student in the library at TWU recently.

Masks have been worn by students and faculty members in and out of class since coming back for the fall semester at Tennessee Wesleyan University.

Around 100 students have been quarantined and roughly 30 have tested positive for COVID-19, according to Tennessee Wesleyan University officials.

On Wednesday, Oct. 7, TWU President Dr. Harley Knowles released a statement via e-mail to staff and students of the university regarding the current COVID-19 situation.

In the e-mail, Knowles noted that the university has encountered an “uptick” in campus cases over the last few days.

“Our positivity rate has been low. However, we have begun doing rapid testing in the health center for those who are exhibiting symptoms or those who have had direct exposure to people who have tested positive,” he stated in the e-mail. “We are also doing significant contact tracing on campus, which has led to students being directed to the health center. As rapid testing (results in 20 minutes) is ongoing, we are beginning to see an increase in positivity.”

In the e-mail, he noted approximately 17 positive cases had been discovered and about 100 students were in quarantine due to exposure, however the number of students who have tested positive had increased to about 30 as of Thursday.

“Our positivity rate, as of last week, was usually two to three … We have been doing some very aggressive contact tracing and in doing so it has led us to some people that we found were positive within some of our athletic teams,” said Knowles in an interview with The Daily Post-Athenian. “Because the athletic teams tend to spend a lot of time together (practicing and traveling together), even though they are following protocols there is still an opportunity for exposure.”

The university has made an agreement with a physician’s office to perform rapid testing which has helped lead to the discovery of the latest active cases and prompted the quarantine of a few of the sports teams.

“We have around 30 active cases on campus and about 100 people in quarantine … Almost all of those are students but we do have a few staff members that are in quarantine,” Knowles noted in the Thursday, Oct. 8 interview. “Our quarantine numbers are probably higher than what you would typically see in a situation like this, if there is a typical, in part because you have teams and out of an abundance of caution we chose to quarantine the whole team(s) … there is just so much interaction, we are a small community and we are just being cautious about this.”

According to Knowles, the majority of the students who have tested positive are asymptomatic with very few showing minor symptoms.

“That is what makes this whole situation so insidious,” Knowles expressed. “It is hard for us to know who is infected or not.”

The amount of students who are quarantined will not affect classes, he noted, as the campus has already prepared for such events with virtual classes.

“Almost all of our classes are both in seat and virtual at the same time,” Knowles said. “So every class is being videotaped and has audio component because we have had some students, for health reasons, elect to stay remote.”

During their quarantine, most students have elected to return to their home until they have waited out their isolation time.

“Most of our students within a two or three hour distance from campus are electing to go home for their quarantine,” Knowles stated. “That has really worked out well and it relieves a little pressure off of us.”

TWU Vice President for Student Life Dr. Scott Mashburn believes that the university’s plan to handle the quarantines and allow students to continue to participate in class via virtual learning is going well.

“We spent extensive time from March to August establishing a plan. We had people from all over campus (IT, marketing, etc) sitting around the table to think of the scenarios we could face and how can we respond to those scenarios,” Mashburn said. “Having great medical partners in town that work with us to get testing available has worked really well and the faculty having a plan in place for the students has been great.”

One of the difficult things during the pandemic is continuing sports activities.

“We have about 400 student-athletes and many of them have had trouble getting their competitions in because other schools are having this problem as well,” Knowles stated. “If we are going to play another school and they have a cluster outbreak then our team doesn’t go, so we have had to cancel a number of competitions and this has been really disruptive ... We have all of these athletes that have come here from all over the world to play sports and they have not been able to have any competition, but student safety is our number one priority and not being able to participate in sports is a small price to pay as long as people are safe.”

Knowles expressed his gratitude to the students and staff for following the CDC guidelines.

“I’ve been really impressed with how compliant students have been in terms of masks, but it hasn’t been perfect,” Knowles noted. “We have to do some reminding, but for the most part they have done a good job.”

Knowles believes the best approach one can make to protect themselves is to “act like it (the virus) is everywhere.”

The university has utilized several methods to combat the virus, including ultraviolet light in areas that are hard to clean, bio spray which reportedly kills COVID-19, and installed iWave air purifiers through out all of their buildings in Athens and Knoxville.

“We have taken some really aggressive steps to protect our students and staff. The only thing we can’t control is the personal behavior of people,” Knowles noted. “We have had a lot of compliance, but this situation has reminded us that we all need to be masked up all the time and social distance all the time because this virus is difficult to contain.”

TWU officials monitor benchmarks between Knox County and Bradley County to help them decide on their plans moving forward during their weekly meetings.

“We are looking at things on a larger scale, not isolated to just here on campus,” Knowles said.