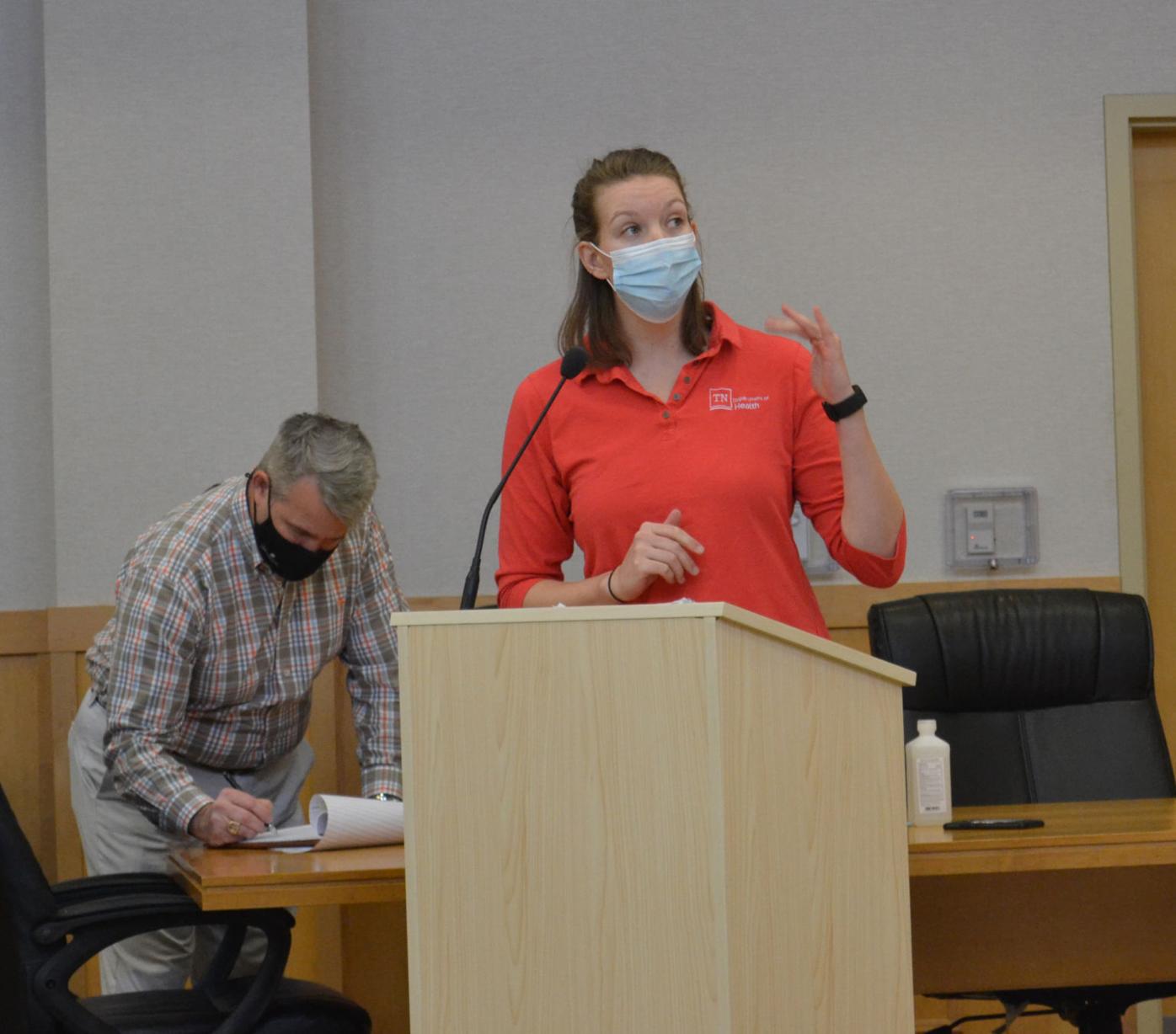 Shown here, State of Tennessee Department of Health’s Jane Yackley talks about the COVID-19 vaccines during a briefing on the COVID-19 situation in McMinn County Friday. 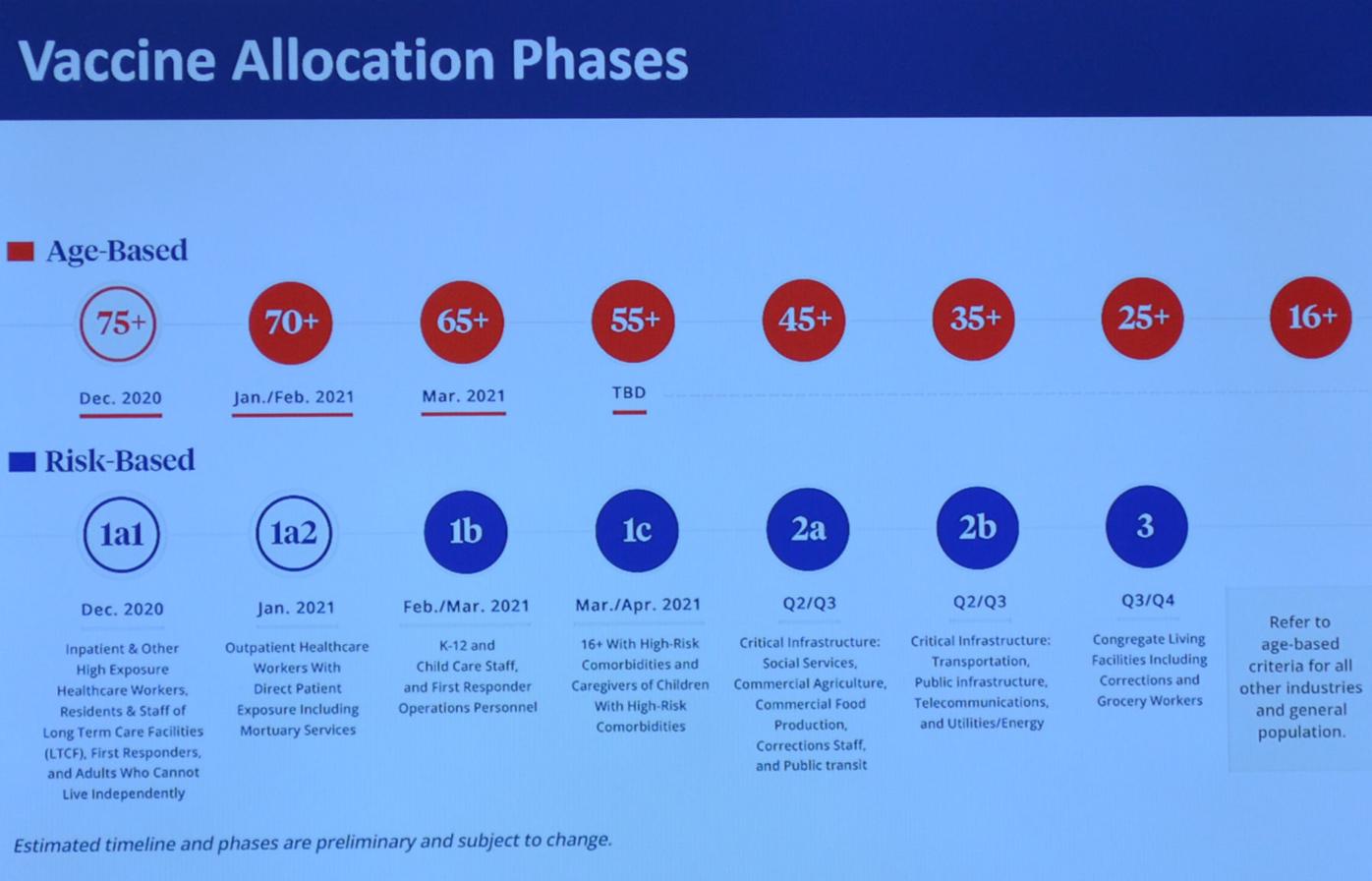 Shown here is a chart provided by the Tennessee Department of Health on the expected timeline of the COVID-19 vaccinations. The timeline is subject to change as necessary.

Shown here, State of Tennessee Department of Health’s Jane Yackley talks about the COVID-19 vaccines during a briefing on the COVID-19 situation in McMinn County Friday.

Shown here is a chart provided by the Tennessee Department of Health on the expected timeline of the COVID-19 vaccinations. The timeline is subject to change as necessary.

As part of the State of Tennessee Unified Command Group’s visit to McMinn County on Friday, state officials discussed the COVID-19 vaccines and the distribution plan.

The first wave of vaccinations arrived in the State of Tennessee in December.

“We were very excited to receive our first shipments of vaccinations right around the holiday season and just before the new year,” said State Epidemiologist Jane Yackley.

There are currently two vaccines available for use, the Pfizer vaccine and the Moderna vaccine.

According to the information produced by the Unified Command Group, both vaccines had no significant safety concerns identified during the clinical trials.

Common side effects experienced after vaccinations from both sources were headache, tiredness, redness and soreness where the patient received the shot, and fever. The side effects reportedly dissipate within one to two days.

“There are up to four more vaccines that may be coming this year in 2021,” Yackley said. “That will also be worked through the FDA (Food and Drug Administration) approval process. Five out of the six vaccines will require two doses while one will only require one dose.”

She noted one of the biggest concerns people have with the vaccines is the rapid development of the vaccine’s creation.

“These vaccines were approved by the FDA and they have a very rigorous process of ensuring the safety and efficacy of vaccines,” she expressed. “There are common side effects with these just as there are with other vaccines, but those symptoms on average have lasted about two days and in some cases it would take three to four days to resolve but they did resolve.”

The group revealed two slides during their presentation to inform those in attendance of the phased approach to distributing the vaccine.

According to Yackley, the state is currently at the end of the limited available doses category with hopes of transitioning into the large number of available doses in the near future.

“We are really in the stage where the supply is much lower than the demand,” she said. “We expect that to change over time as production ramps up, but we really need to be thoughtful about where the vaccines are going right now, which leads to the allocation phases.”

They provided a chart that stated the vaccine became available to people 75 and older in December with this month and next month focusing on the age group of 70+ then 65+ in March with the trend continuing all the way to age 16+.

The risk-based category included the number-letter-number setup that people are becoming familiar with.

The current phase for McMinn County is phase 1a2, which includes outpatient healthcare workers with direct patient exposure and mortuary services. Phase 1b is expected in either February or March — including K-12 and childcare staff and first responder operations personnel — and then Phase 1c in March or April — including those 16+ with high-risk comorbidities and caregivers of children with high-risk comorbidities.

McMinn County Mayor John Gentry asked how the command group plans on allocating the vaccines once the supply meets the demand.

“We are engaged with a lot of different partners who have already signed up to be providers of the vaccine, so there are about 1,900 facilities that will distribute the vaccine and we will not have to do mass vaccinations,” Yackley said.

“Every county will be able to utilize things in a way that best suits them whether it be that people can go to pharmacies to receive the vaccine or be produced by mass vaccinating sites,” Brower added. “There will be no cost to the citizens as this vaccine will be federally provided. Every American is entitled to receive a vaccine at no cost to them.”