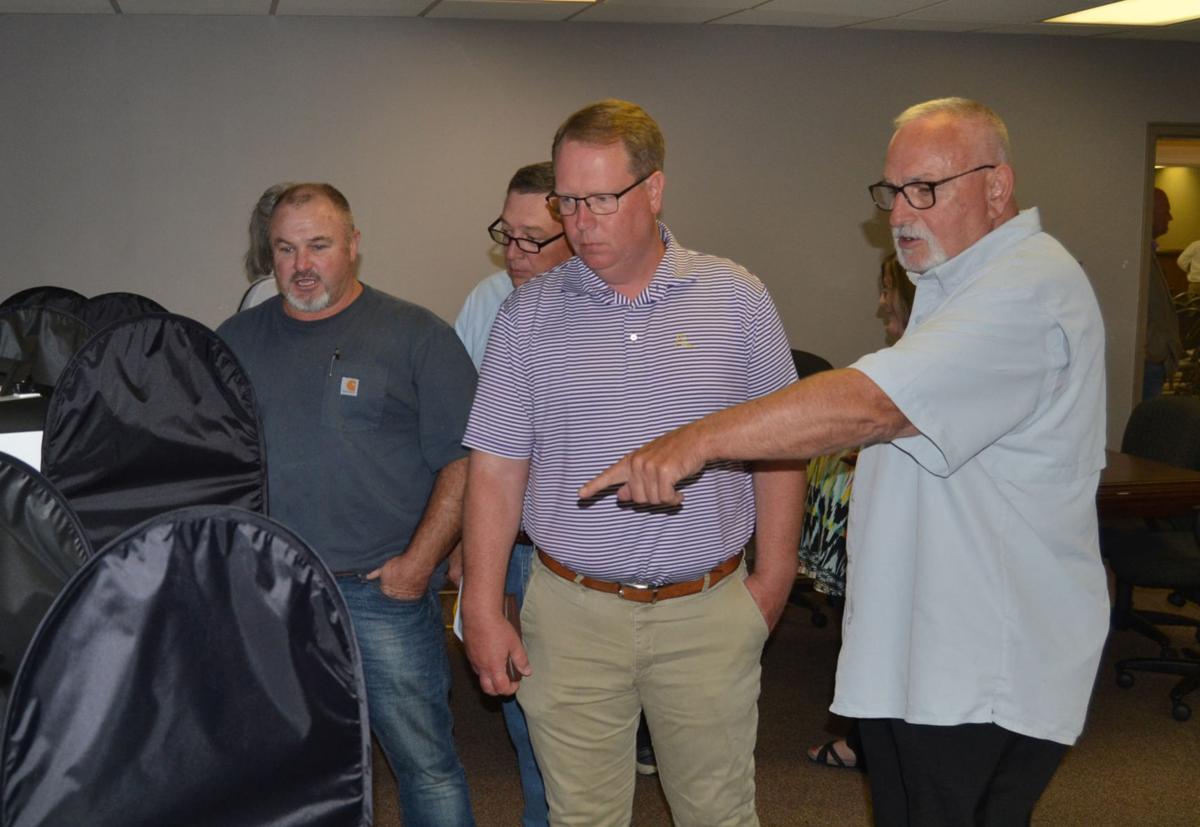 McMinn County Commissioners recently were invited during a meeting to take a look at the voting machines that will be used locally in the August elections. 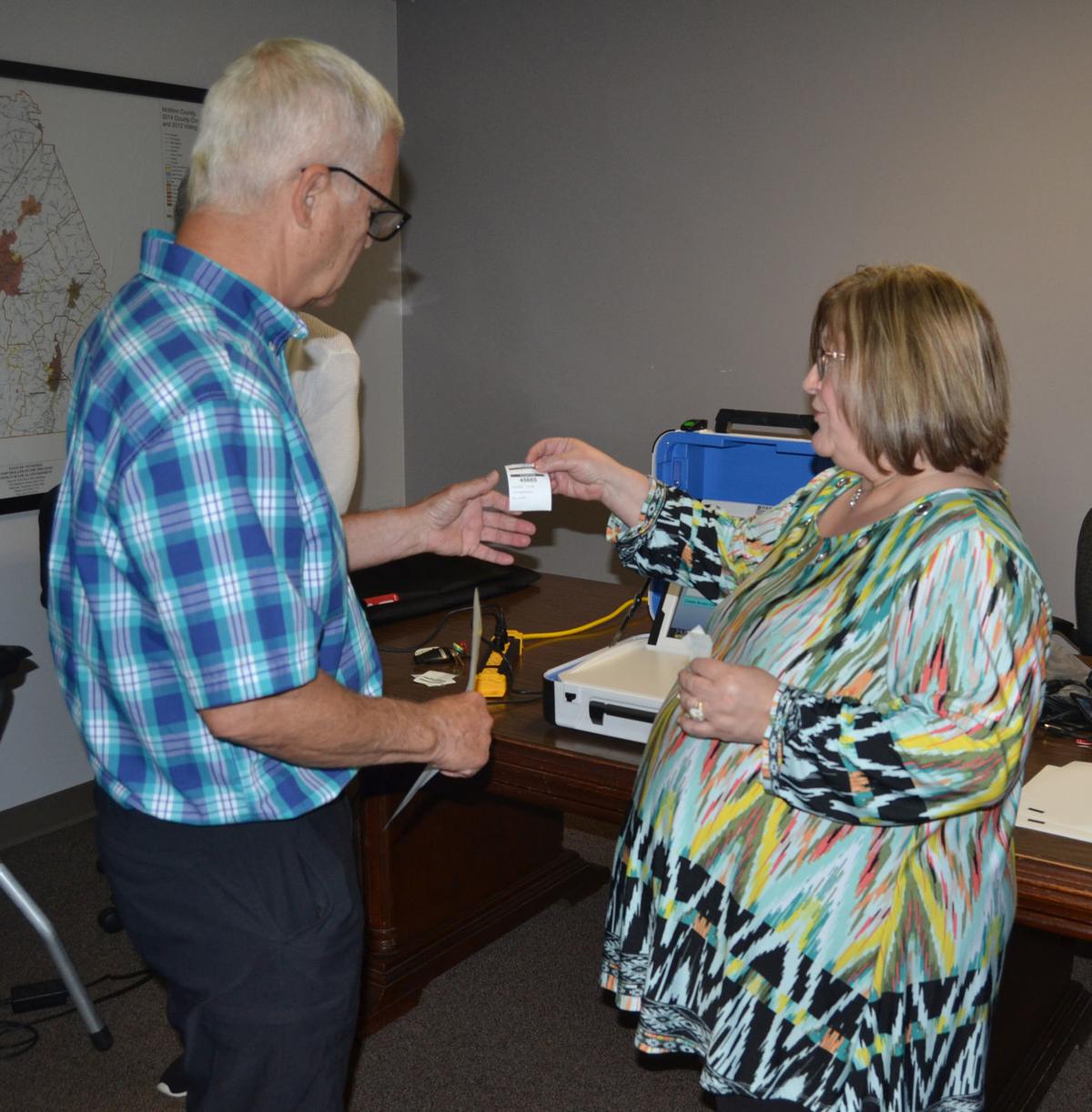 McMinn County Commissioners recently were invited during a meeting to take a look at the voting machines that will be used locally in the August elections.

The promotion of the new equipment allows voters to familiarize themselves with the new machines that will be utilized in the upcoming August election.

Voters may visit the election commission office to view the machines from 9 a.m. to 6 p.m. Monday, June 22, through Friday, June 26, with additional showings on Saturday, June 27, from 9 a.m. until noon and Sunday, June 28, from noon until 3 p.m.

“We will give the public seven days to come and test the machines out,” said McMinn County Administrator of Elections TeAnna McKinney.

They will be following the social distancing guidelines set up by Tennessee Gov. Bill Lee and the Centers for Disease Control and Prevention (CDC) by placing six foot markers on the floor to show people the proper distance to stand away from other individuals.

Masks and gloves are not required, however gloves are recommended and will be distributed by the election commission in a “little voter’s packet” that consists of gloves, a sticker and a pen for the voters to use.

The same guidelines will be used during actual voting process as well.

“We just want to open our office and allow the community to become familiar with the equipment before they come to vote,” said McKinney.

The voter registration deadline to vote in the Aug. 6 election will be July 7.

Those who wish to register to vote can do so in person at the election commission office, which is required if you wish to vote absentee, register by mail or register online by going to votetn.com

Early voting will be from July 17 until Aug. 1 at the election commission office as well as Athens Regional Park’s Conference Center.

Early voting at the conference center will last for two weeks starting July 20 until July 31, Monday through Friday.

McKinney believes there won’t be much of a difference in the voter turnout from the impact of COVID-19.

“I think at this point in the COVID-19 pandemic, because we don’t have a significant rise, I don’t see a huge factor from it,” she noted. “We are taking huge precautions in it. We are requiring all of our workers to wear a mask or a face shield. We have full personal protective equipment (PPE) for them.”

Other methods they are utilizing to combat the virus are regular surface sanitizing on equipment, counters, doors and other high traffic areas.

“We will also have a sign posted with the guidelines on it and we ask that if you have any of the symptoms not to come in,” McKinney said. “They should call us instead and we can make arrangements for them.”

Two locations will also be utilized during election day on Aug. 6.

“We would like to say to anybody who would normally vote on election day at the courthouse, due to COVID-19 we feel that we would have too many people at one location, so for just the August and November 2020 elections we are also voting the courthouse precinct at the school board in their boardroom,” stated McKinney.

The August election will feature a variety of local and statewide races.

Incumbent Chuck Fleischmann is running unopposed for the U.S. House of Representatives District 3 Republican primary, as is future challenger Meg Gorman in the corresponding Democratic primary.

State Rep. Mark Cochran is running unopposed for the Republican primary for the Tennessee House of Representatives District 23 seat. No Democrat qualified for the Democratic primary.

At the McMinn County level, Republican Keith Price is running unopposed for assessor of property, as are school board candidates Johnathan Pierce in District 1, Denise Cunningham in District 2, Donna Maxwell Casteel in District 3, Tony Allman Sr. in District 4 and Sharon Brown in District 5.

Candidates for the election in the Town of Englewood mayoral race are challenger Tony R. Hawn and incumbent Jason Hitt.

Candidates for Englewood City Commission are Walter Arrowood and James C. Cochran, with two seats up for grabs.

City school board candidates for the City of Etowah are Jessica Goodin and Jeff Williams with two seats available.

There will also be a judicial retention question on the ballot, with voters given the opportunity to vote to either retain or replace Carma Dennis McGee as a judge of the court of appeals, western division.

Meigs County will be following the same COVID-19 guidelines and practices as McMinn.

Early voting for Meigs County will also be July 17 through Aug. 1 and voting hours will be Monday through Saturday from 9 a.m. to noon at the election commission office and 9 a.m. to 6 p.m. Monday through Friday at the basement address for city hall, across the street.

Voters who go to city hall to cast their votes will also be able to go on Saturdays from 9 a.m. to noon.

The ballot is the same in Meigs County for both Republican and Democratic primaries for the U.S. Senate, while the U.S. House of Representatives Republican primary in District 4 will feature incumbent Scott DesJarlais competing with challengers Doug Meyer and Randy A. Sharp.

Incumbent Dan Howell is running unopposed in the Republican primary for Tennessee House of Representatives District 22 and there is no qualified candidate on the Democratic side.

There will also be the same judicial retention question on the ballot, with voters given the opportunity to vote to either retain or replace Carma Dennis McGee as a judge of the court of appeals, western division.