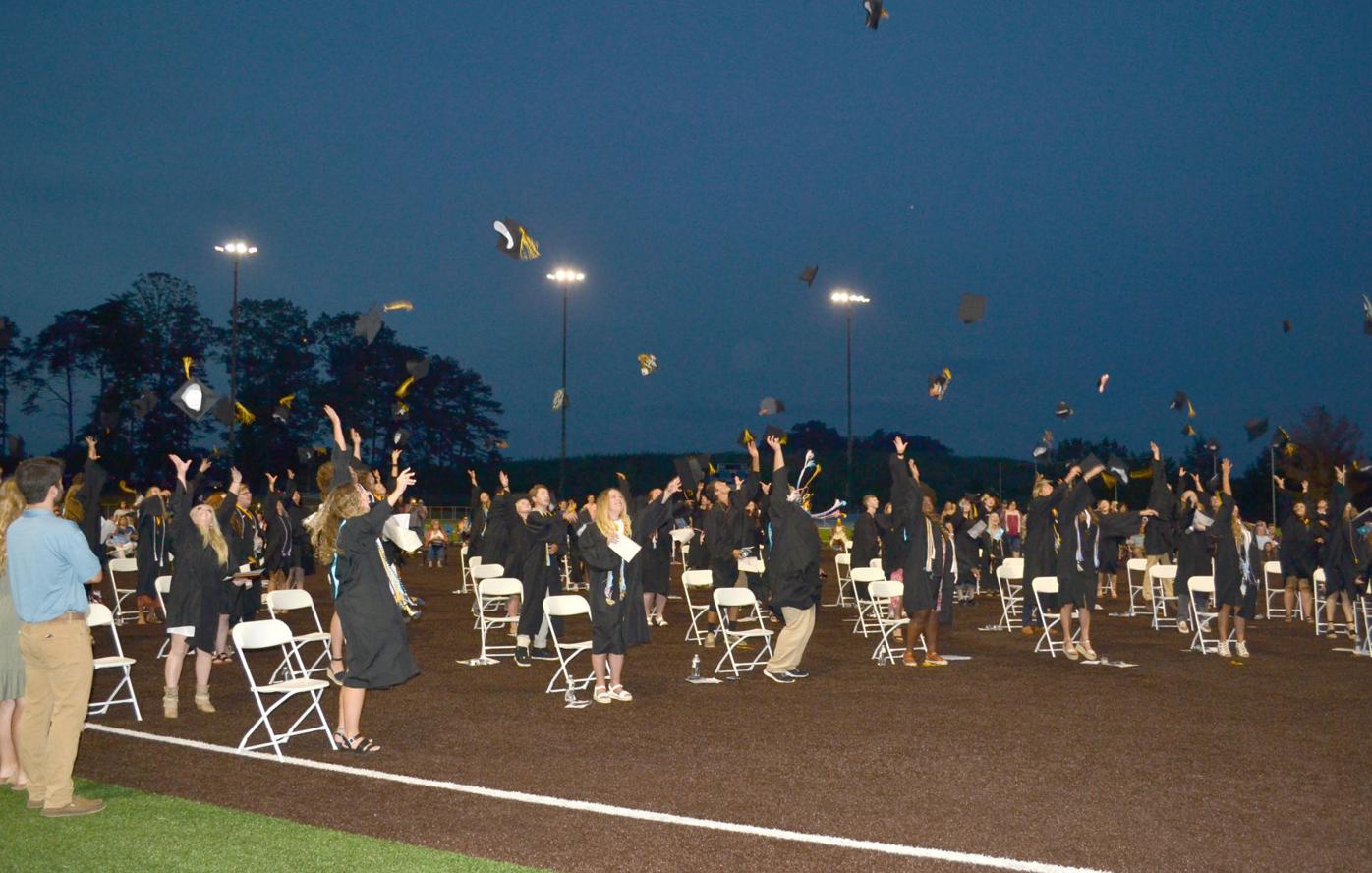 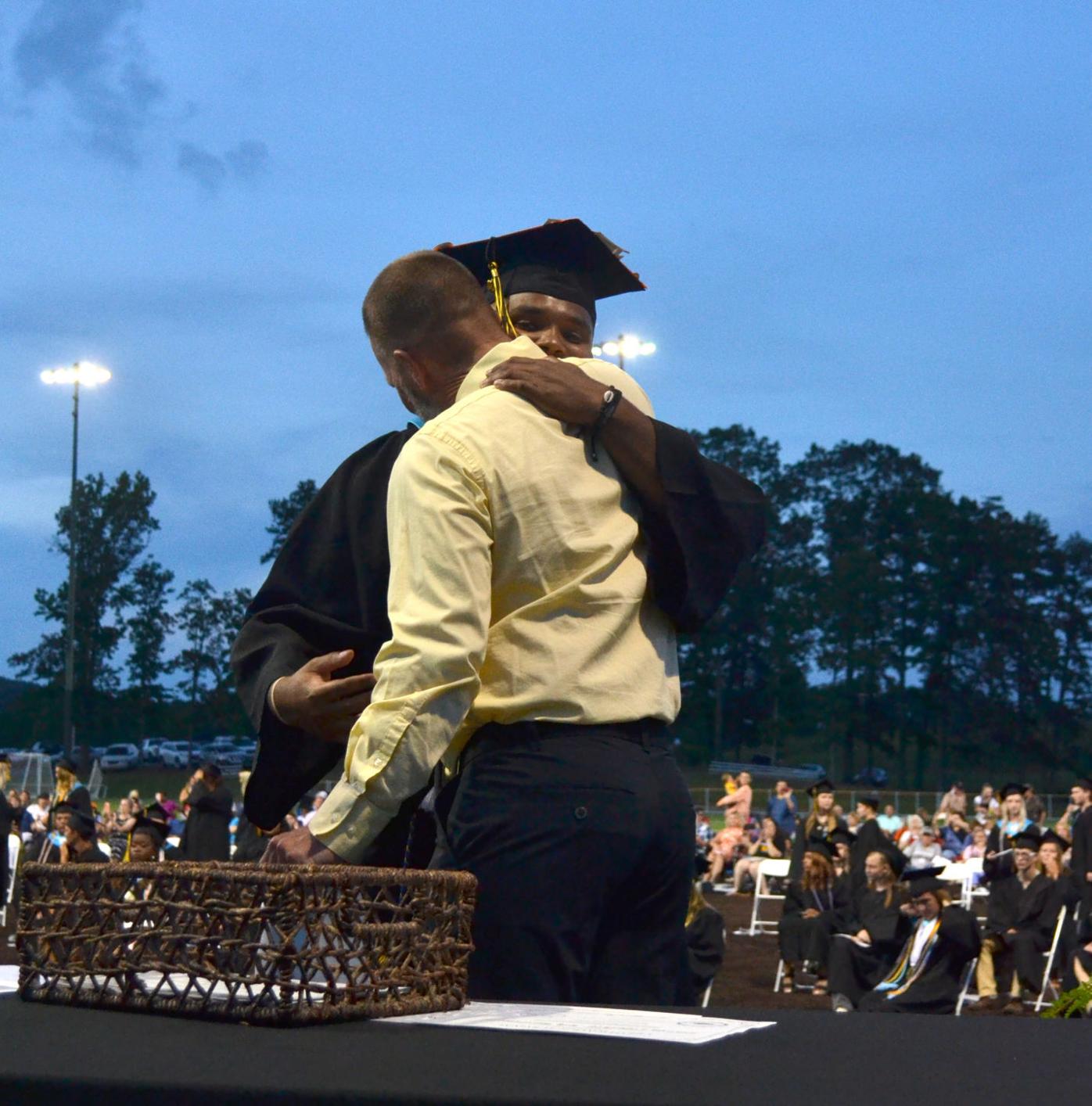 The inaugural COVID Commencement was organized by parents after it become known that the coronavirus pandemic had led MCHS officials to spread the typical ceremony out across the entire day.

Gentry presented the seniors to Bell and Cochran, whose role it was to accept the senior class. Coffman was the master of ceremonies and MCHS Athletic Director Bo Cagle handed out the diplomas.

Several valedictorians spoke during the event, discussing the way COVID-19 affected their senior year and what it has meant to them.

“I know many of us are upset over the way our senior season has ended,” Azia Compton said, though she noted that there are lessons to be taken from it. “I will never again take any moment for granted. I will forever cherish every moment I have made over the last four years with each of you.”

Katherine Derrick followed Compton, as she talked about God’s plan for the students in the Class of 2020 and quoted John 16:33.

“This was a special and unique way to end our senior year that’s been nothing short of unique,” she said. “God has a special plan and unique purpose for each of us. We’re going to build the world for the next generation.”

Jordan Kauffin added that the tumultuous times that ended the year for the senior class didn’t end with the coronavirus. He cited the ongoing protests going on across the country following the death of George Floyd at the hands of a police officer as well.

“Do your part,” Kauffin said. “Don’t let any form of prejudice stand. There are many reasons the country is in the state it’s in — find them.”

He added that there is good that has come from these tough times.

“We’re stronger and we’re smarter than we’ve ever been,” he said. “Be good, be kind, goodbye Tribe.”

Haley McMahan stressed to her fellow graduates that their outlook in life will determine a lot for them.

“Wherever you end up is where you were meant to be,” she said. “As you step into the next chapter in your life, I hope you do it with a good attitude.”

Presley Webb also spoke to her fellow graduates about their future.

“Our class is one of a kind,” she said. “We’ve learned to take every chance we get. The Class of 2020 is bound for greatness and I can’t wait to see what we do in the future.”

As he presented the graduating class, Gentry noted that this achievement “celebrates the culmination of your public education experience” and that the commencement ceremony is a sign of “beginning a new and exciting chapter of your life.”

He also called back to several other difficult times in the country’s past and noted that, as the American people have done before, the Class of 2020 can help overcome these.

“Tonight we are inconvenienced, but we are not defeated,” he said.

He added that the graduates should look to God as they prepare for the rest of their lives.

“If you try to plan the rest of your life without consulting the Creator God Himself, who wonderfully and fearfully made you for a specific purpose, life will be an endless struggle in the pursuit to find meaning,” he said. “Do not pursue happiness at the expense of joy and peace. Don’t pursue knowledge without first pursuing wisdom.”

As he accepted the graduates, Bell also talked to the students about God’s plan for their lives.

“None of us could have imagined this,” he said. “He knew this was coming. Take comfort in knowing God wasn’t surprised by this. You’re going to be stronger as a result of this.”

Cochran added that despite the struggles of the times, the graduates have an advantage many others in the world don’t.

“You get to pursue your success in the freest nation in the history of mankind,” he said. “You have the opportunity to have individual liberty and individual freedom and to find that purpose for your life.”

Graduates Clayton Cotter sang the national anthem and Micah Dake led the opening prayer, while the Cherokee Singers closed out the event with the school’s alma mater.