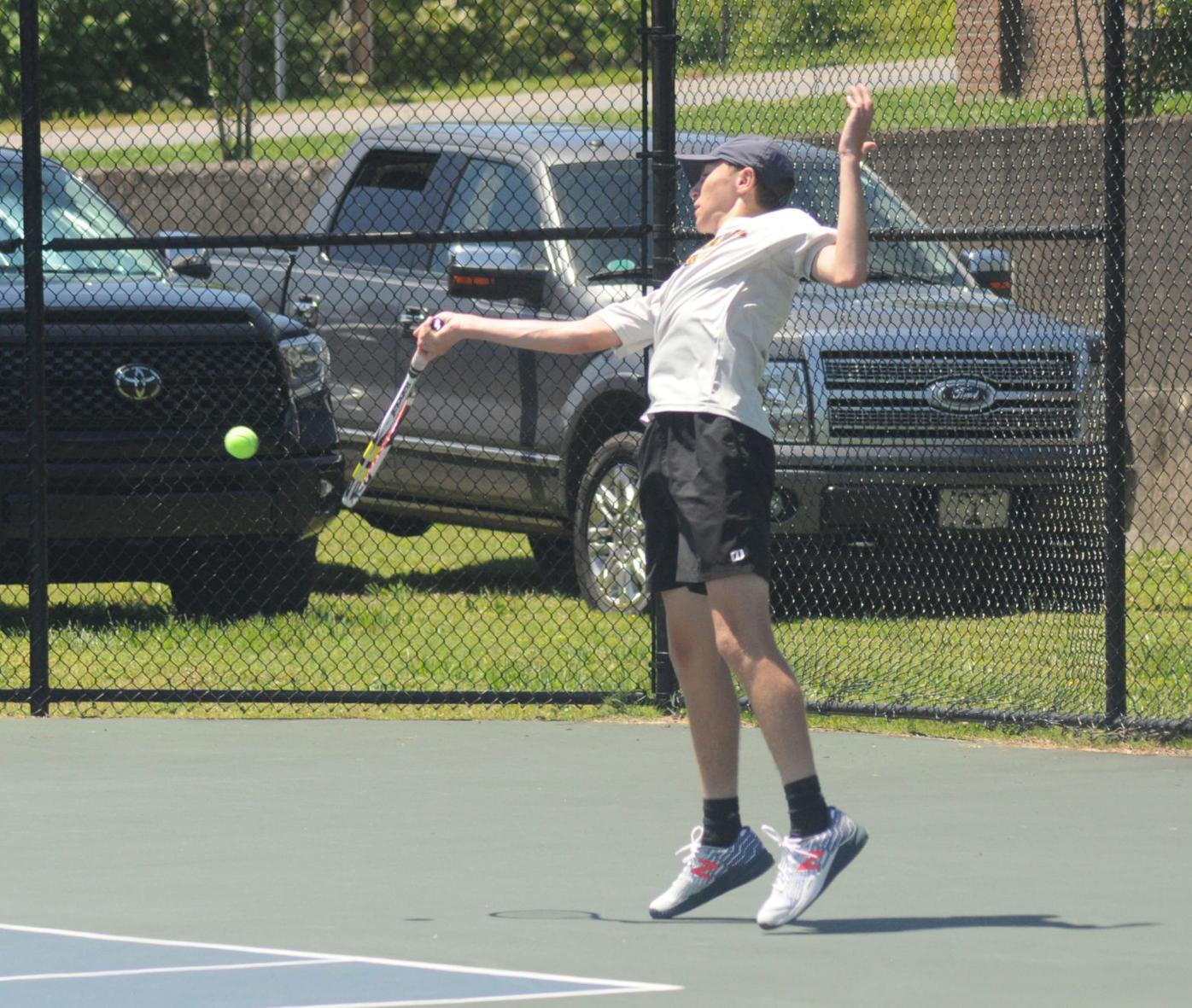 McMinn County’s Brandon Clunie, a senior, had a goal of qualifying for the TSSAA Spring Fling before his final high school tennis season was canceled due to the COVID-19 pandemic.

The 2020 McMinn County tennis team’s season ended after two regular-season matches, with the COVID-19 pandemic eventually leading to the cancellation of spring sports in Tennessee.

McMinn County’s Brandon Clunie, a senior, had a goal of qualifying for the TSSAA Spring Fling before his final high school tennis season was canceled due to the COVID-19 pandemic.

The 2020 McMinn County tennis team’s season ended after two regular-season matches, with the COVID-19 pandemic eventually leading to the cancellation of spring sports in Tennessee.

Brandon Clunie kept hoping he could return to the tennis court in a McMinn County uniform this spring, even as the senior realized that was increasingly unlikely.

Play had stopped in March for McMinn tennis after two matches due to the COVID-19 pandemic, ultimately leading to the official cancellation of the rest of the school year and spring sports with it in Tennessee. Gov. Bill Lee made the announcement in mid-April, with the TSSAA following by canceling the Spring Fling.

And with that, Clunie’s high school tennis career and his quest for a long-awaited trip to Murfreesboro were finished.

“Just about the whole time until the TSSAA canceled the whole tournament, I was hoping and praying that we’d be at least able to do the district and region tournaments,” said Clunie in an interview with The Daily Post-Athenian. “I was expecting it. I thought at first we could still have it, but then once it got really bad at that point, I knew that it was probably going to get canceled more than likely.”

But expecting the season to get nixed didn’t make it any less disappointing for Clunie. After reaching the Region 3-Large Class finals last year, falling one match short of a state tournament berth, Clunie was determined to finish out his career by not only reaching the Spring Fling, but winning the state title.

And along the way, help what was otherwise a youth-laden McMinn squad this season develop.

“I was really looking forward to try to make my last push to go to state and maybe win the state singles championship,” Clunie said. “And teach a lot of the team, it was really young this year, so teach a lot of the freshmen and the younger guys and girls on the team a lot of tennis and get them started in their high school career. And just have fun my senior year before I go off to college.

“It was very upsetting. I feel like I lost a lot of memories and matches and my last year of opportunity to finish off with a state championship.”

Coach Lynn Monroe believed Clunie had a clearer path to Murfreesboro this year than before, especially with Clunie’s main road block from last year, district and region finals opponent Matthew Templeton, transferring away from East Hamilton out of district.

“More than anything, Brandon, I think he had high hopes of getting to the state tournament,” Monroe said. “We feel like he was going to have a great season, so I just hate it for him.”

Despite losing his senior season of high school tennis, Clunie will play in college somewhere. He had originally signed with Point University in March, but decommitted after due to a family situation. Clunie is currently pondering offers from Hanover University in Indiana, University of Mount Olive in North Carolina, Concordia University in Nebraska, Thomas More University in Kentucky and Arcadia University in Pennsylvania.

“I don’t know where yet, but I’m definitely looking forward to extending my academic and athletic career,” Clunie said. “It means a lot to do that, because I didn’t know when I started playing tennis that I would be able to play in college until I received my first offer and colleges started looking at me, maybe the summer between my junior and senior year, and I didn’t even really realize it, and it meant a lot to me.”

But while Monroe is glad that Clunie will get an opportunity to continue his college career, she still wishes he had a chance to strive for his goals his final year at McMinn.

“You just wanted him to have the opportunity to try to get to state if you think you can go,” Monroe said. “I know that’s what a lot of teams have had to face this year, but especially him. I think he had a good chance after losing in the finals last year of region.”

According to Monroe, Clunie had played an active role in teaching the younger players at McMinn leading up to the season. Clunie said he’ll miss guiding the underclassmen and wishes he could’ve done that more, before the coronavirus ended it all.

Clunie does leave some words of wisdom to McMinn’s returning players, however.

“It’s a lot about the memories of the people you meet and the team feeling and bonding and having fun with it, more than just every match,” Clunie said.

Clunie is one of four seniors on the boys’ team. The other three seniors are Micah Dake, Jasiah McDermott and Alay Mistry. The girls’ team graduates three seniors: Mackenzie Newman, Allie White and Katie Derrick.

After those seniors, the boys’ team had two sophomores and four freshmen, while all six girls aside from the seniors were freshmen. A few of those younger players, however, showed promise in McMinn’s matches against Ooltewah and East Hamilton, both of them wins.

Kylee Hockman and Reagan Goforth for the girls, and Tucker Monroe, Luke Ramey and Ethan Jones for the boys are among the freshmen players that gives Monroe confidence once McMinn tennis can return to action starting next spring.

“So even though we didn’t get to have this year, I’ve got a lot of young kids,” Monroe said. “So I think it’s going to get even better the next two or three years.

“The first two matches I thought were good. We won both, and it looked good. But that’s all we got. And some of the others didn’t get to play, so you don’t even know how you would’ve compared. Some of them were on Spring Break and never got to play. But the first two matches were good, and I was excited and the kids were too. But that was that. It’s a crazy year.”