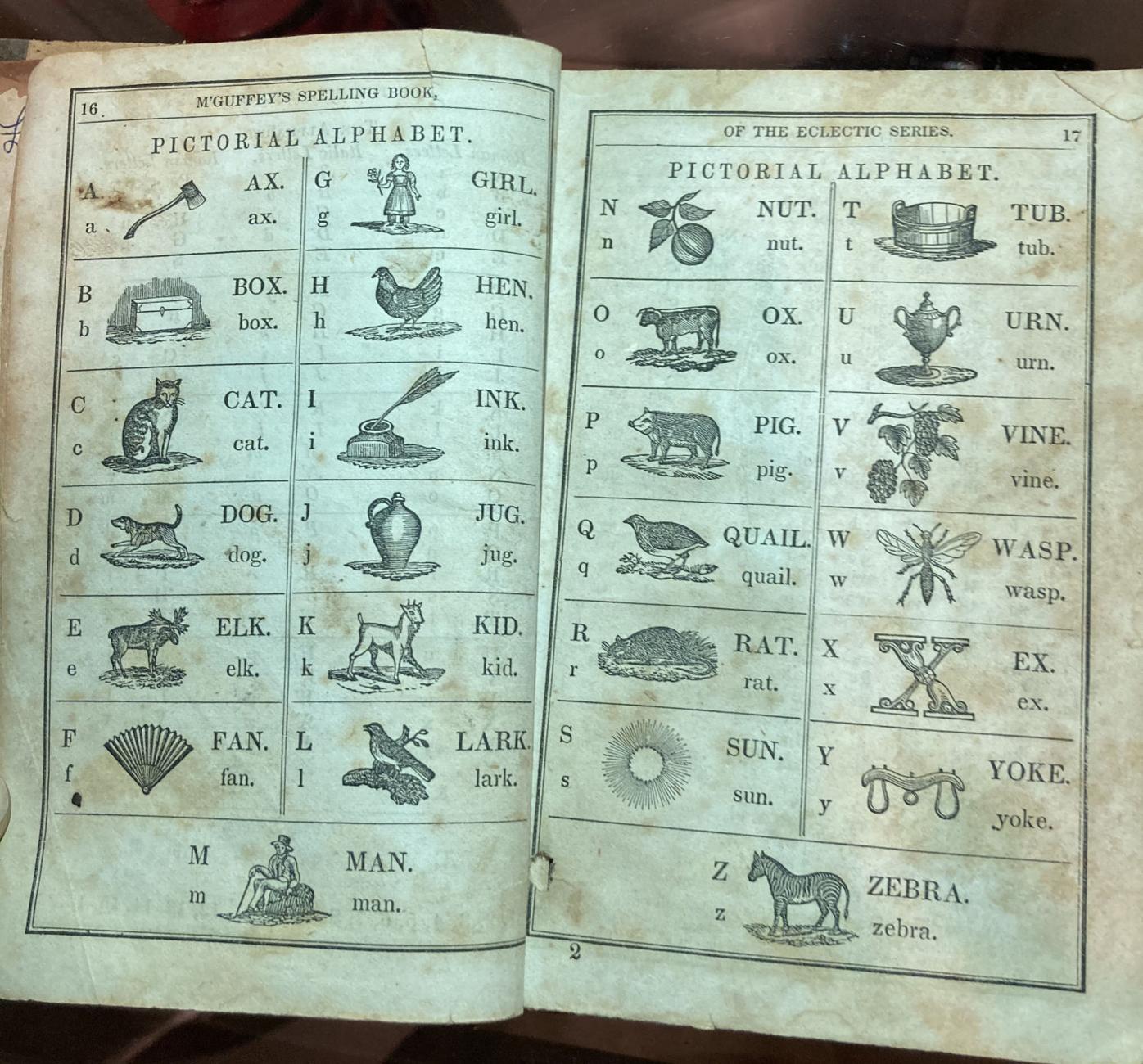 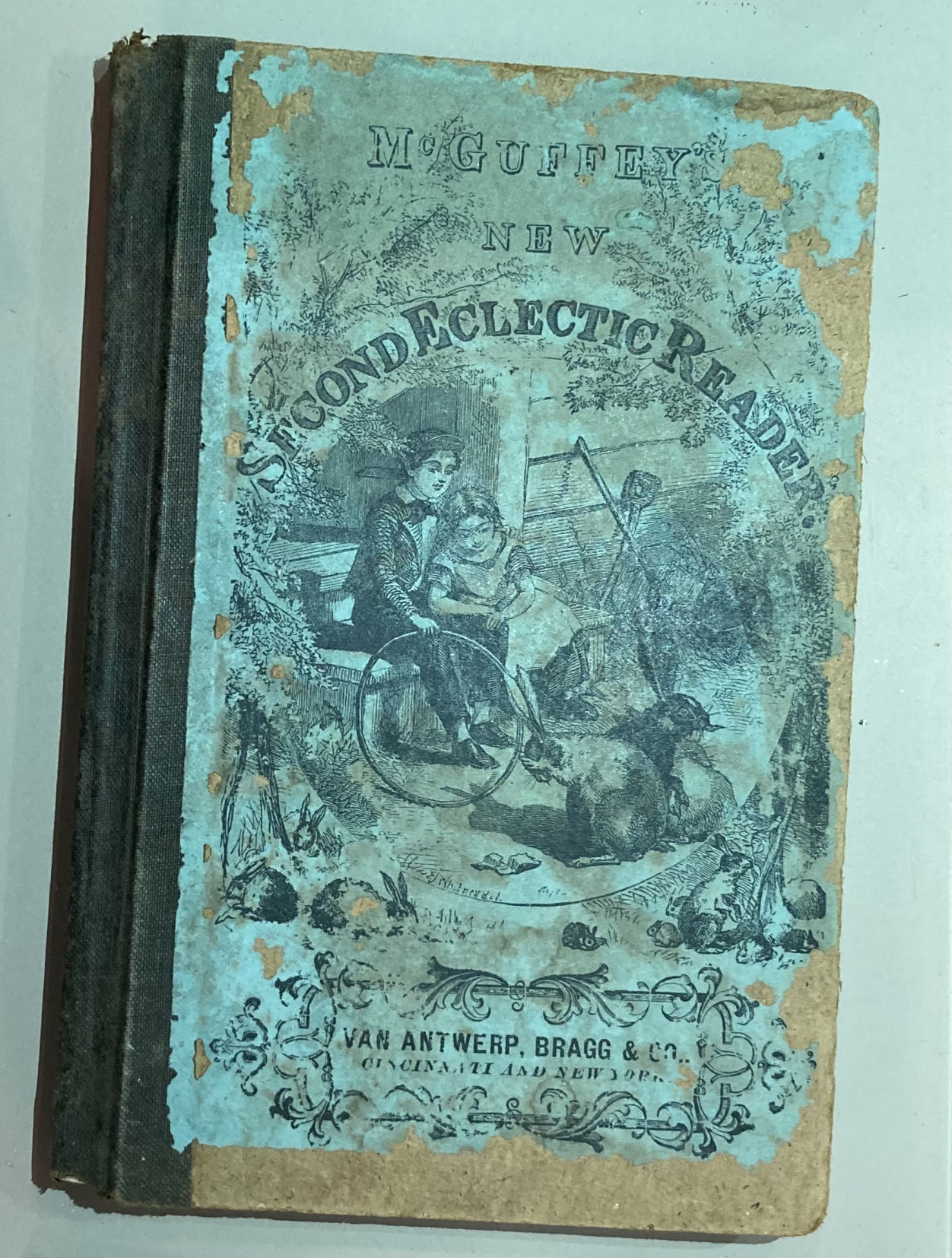 Shown in these photos are vintage copies of the McGuffey Reader, which are currently on display at the McMinn County Living Heritage Museum.

Shown in these photos are vintage copies of the McGuffey Reader, which are currently on display at the McMinn County Living Heritage Museum.

McGuffey Readers are more than just 19th Century school books. They are part of a legacy of exceptional learning material that started with the creativity of educator and Presbyterian Minister William Holmes McGuffey (b. 1800, d. 1873).

Here at the McMinn County Living Heritage Museum, we have all six McGuffey Readers and a speller that are part of this legacy of learning in our early schools. The readers were in print from 1836 to 1921.

Research shows that two of the best-known schoolbooks in the history of American education were the 18th Century New England Primer and the 19th Century McGuffey Readers. The McGuffey Readers were the most popular and widely used. They are still used by some home schoolers. By 1879, tens of millions of copies had been sold placing its sales in a category with the Bible and Webster’s Dictionary.

McGuffey began his career in Western Ohio, Kentucky and Western Pennsylvania as a traveling part-time instructor after graduating from Washington College in Pennsylvania. He often worked at “subscription” schools. Subscription schools were usually one-room, wood-framed or log cabin schools that were funded by the parents who paid for their children to get schooling. His teaching resources included the 18th Century Puritans New England Primer, Noah Webster’s American Spelling Book and the Bible.

In 1826, McGuffey became professor at Miami University in Oxford, Ohio. He married Harriet Spinning and they had five children. In 1829, he was ordained a minister in the Presbyterian Church in Bethel, Ohio. It was while he was working in Oxford that he was asked to publish a series of text books. He particularly enjoyed teaching children, so when he was asked to publish his works, he immediately started creating the McGuffey Readers and wrote four of the six readers. He targeted the young learner with the values, beliefs, and way of life of the frontier families. The Eclectic First Reader and Eclectic Second Reader were published in 1836, and the Third and Fourth in 1837. They contain word formation exercises, pictures, and stories of varied subject matter that appeal to young children and teach religious, moral, and ethical principles that reflected McGuffey’s personality and society at the time.

An example would be the story about John and his dog named Trip. John fell into a stream and his dog tried to get him out unsuccessfully. The dog was able to hold him until a man happened to come by and pulled John to safety. God had sent the man to save John. A few questions are asked at the end of the story asking if the boy thanked the man, if he would be kind to his dog, and if he will love the man that saved him and love God who sent the man.

In 1836, McGuffey became president at Cincinnati College, where he was also a teacher and a lecturer. In 1839, he became the fourth president of Ohio University. In 1843, he became president of the Woodward Free Grammar School in Cincinnati — one of the earliest public schools in the county. In 1845, he moved to Charlottesville, Va., where he became Professor of Philosophy at the University of Virginia. His wife, Harriett, died in 1850, and he met and married Laura Howard — the daughter of Dean Howard of the university.

His contribution in education touched many who have named institutions for him. There is a William H. McGuffey Primary School in Charlottesville, Va., currently an art center known as the McGuffey Art Center, a McGuffey cottage behind Virginia University, McGuffey Hall is part of Ohio University, and Miami University has a McGuffey Hall for educational departments. They ran the McGuffey Laboratory School from 1910 to 1983 on campus. The William Holmes McGuffey School Foundation ran an independent progressive school in Oxford later named the McGuffey Montessori School. The McGuffey School District in Washington County, Pa., is named for him. Industrialist Henry Ford credited McGuffey Readers as a childhood influence and had the log cabin where McGuffey was born moved to Greenfield Village — his museum of Americana in Dearborn, Mich. A historical marker is at his hometown high school, McGuffey High School/Middle School, by the Pennsylvania Historic and Museum Commission in 1998.

Most significant to his legacy is the William Holmes McGuffey Longevity Awards created in 1993 and given by the Text and Academic Authors Association in recognition of textbooks that have continued use in education for more than 15 years.

Members of the Museum can tour all the exhibits free of charge, while non-members pay a $5 fee. Senior adults and students pay an entrance fee of $3. Yearly membership to the Museum is $15 for seniors, $25 for adults, $10 for students and $45 for family.