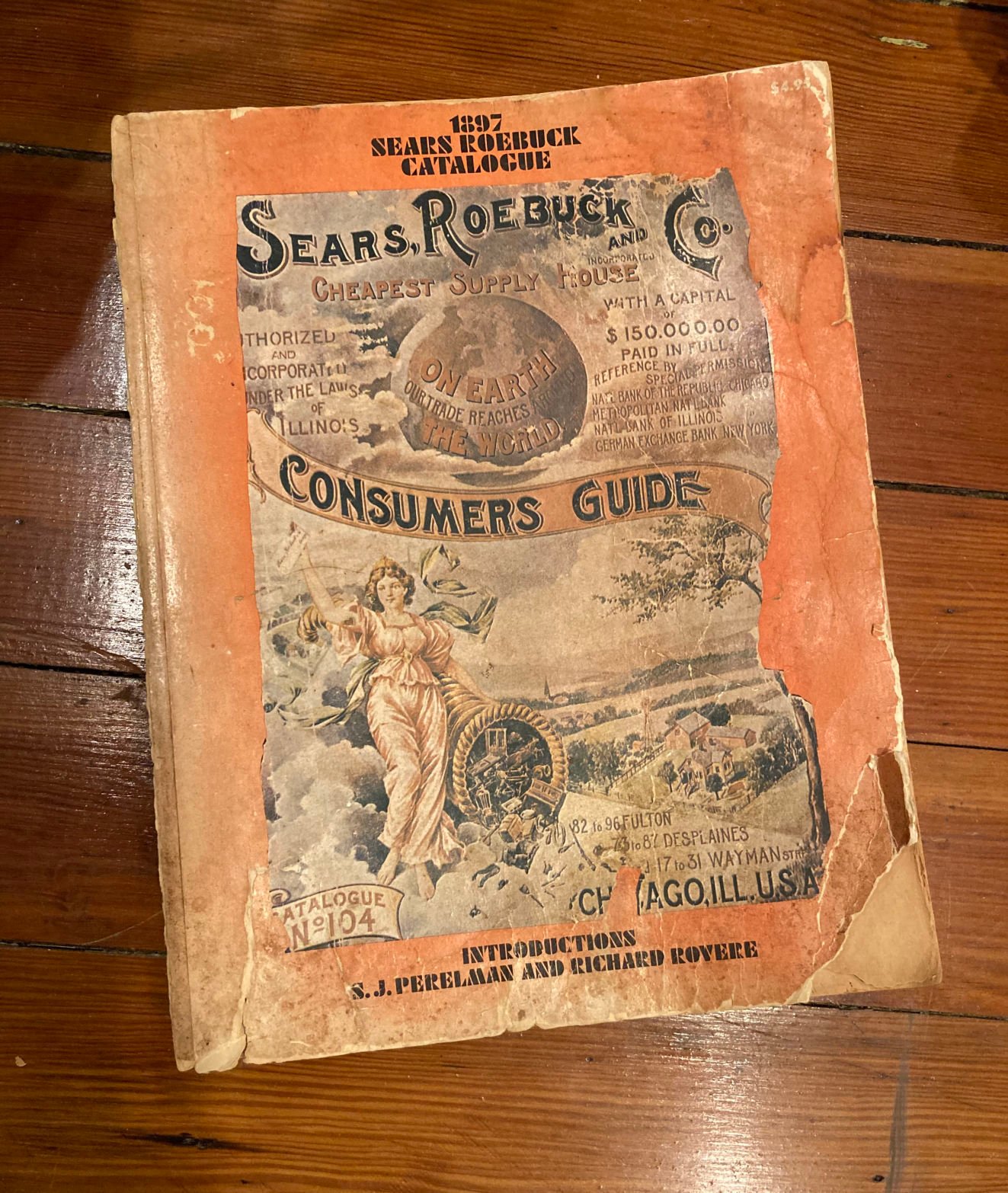 Shown here is a 1968 reprint of the 1897 Sears, Roebuck and Company Catalog that can be found in the general store exhibit at the McMinn County Living Heritage Museum. Also pictured is a sugar advertisement from the catalog. 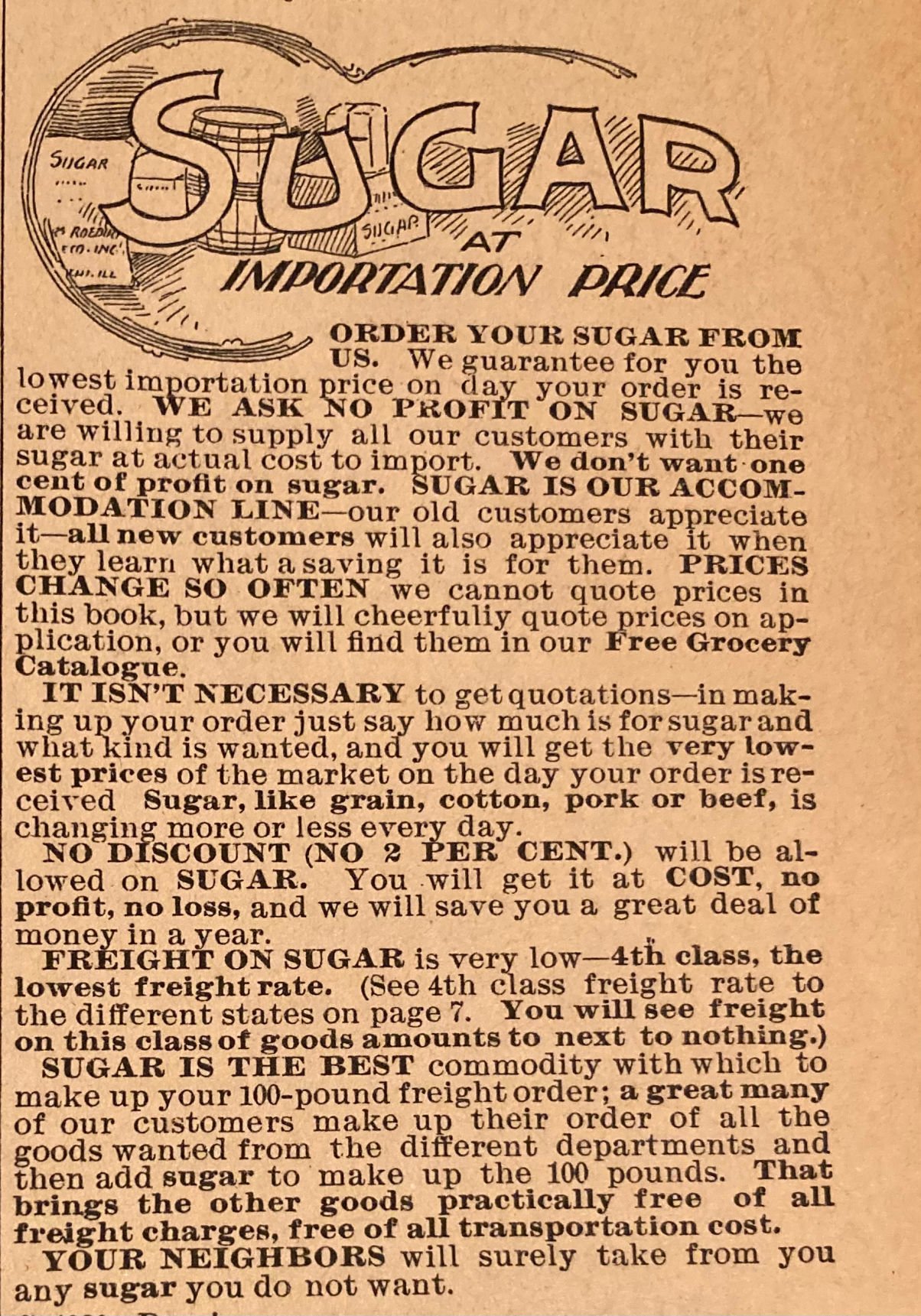 Shown here is a 1968 reprint of the 1897 Sears, Roebuck and Company Catalog that can be found in the general store exhibit at the McMinn County Living Heritage Museum. Also pictured is a sugar advertisement from the catalog.

A 1968 reprint of the 1897 Sears, Roebuck and Company Catalog can be found in the general store exhibit at the McMinn County Living Heritage Museum. The idea of people having the ability to order bulk, thus saving on freight charges, appealed to the rural family — just what the company intended to do. Not only did they have the ability to order grocery needs, they could order clothing, tools, carriages, horse supplies and just about anything they needed.

We can appreciate the effort of Fred L. Israel (b.1934, d. 2019), a professor at City College of New York, for finding an 1897 copy and having it reprinted in 1968. He taught a historical methodology seminar where he introduced students to microfilm, oral history, and archival research. He focused on the life that was revealed during the time. He decided to assign the Sears, Roebuck and Company catalog as it contained thousands of items and revealed how life was in the 1890s.

He was surprised when he found that the college library and even the Library of Congress did not have a single copy. He searched in old book stores and antique shops, but found none. He placed ads in newspapers in the midwestern region successfully finding one 1897 catalog. He had the catalog reprinted because he believed it was a valuable piece of American culture. The reprint sold widely across the country. Today, you can locate one online.

The front cover is colorfully designed and includes a world globe, a goddess and a spill out of product from a creative horn of plenty. You will find under the title, Sears, Roebuck and Co., “Cheapest Supply House on Earth Our Trade Reaches the World.” The building was located at Fulton, Desplaines and Wayman Streets in Chicago, Ill., described as a very large block employing 700 people.

The artistically-designed catalog has about 770 pages of very creative ads featuring over 6,000 items. Each page is packed with information and there is an index which helps a consumer locate an item quickly. It was known as the “Consumers Guide” and guide it did as the tastefully designed artwork and instructions walked you through ordering. Items have assurance statements and testimonial letters giving the consumer a comfort in ordering.

Words used to encourage sales included, “others have ordered” and “the neighbor will admire it.”

Among the instructions, the point is made that the “middleman” is cut out by ordering through the catalog, resulting in consumer savings. Farmers would purchase their supplies through the local general store where prices sometimes could be negotiated, but almost always the prices were high. The Sears catalog had a wider selection of goods compared to anything the local store had to offer and offered lower prices. In 1894, the catalog was 322 pages. It quickly grew to 532 pages by 1895 as product was added.

The history of the founders starts with Richard Warren Sears (b.1863, d.1914). He bought a refused shipment of watches one day while working as a railroad station agent in Minnesota. He sold them to the station agents at a low price, making a considerable profit that inspired him to expand into a mail order watch business. He called it the R.W. Sears Watch Company. In 1887, he met Alvah Roebuck (b. 1864, d. 1948), a watch repairman. The two men relocated the company to Chicago, Ill., and published their first mail order catalog full of watches, diamonds and jewelry items. Business was so good they were able to sell it for $100,000.

Sears relocated to Iowa to work as a banker. By 1892, he returned to Chicago and joined up with Roebuck once again establishing another mail order firm selling watches and jewelry. It was called the A.C. Roebuck Company before they renamed it Sears, Roebuck and Company. In 1893, they started adding more diversified product, increasing their supply, and from there the catalog was born.

Julius Rosenwald (b. 1862, d. 1932) joined the company after the Panic of 1893. He saved the company with his own funds. He was the driving force in the growth of the company, which opened its first store by 1925. After his passing, the company became a conglomerate having its own brands, financial network and joining the stock market. The mail order catalog business was closed in 1993 due to lack of sales. The company could not meet the consumer challenges that Amazon and Walmart brought to the market and consumer habits changed.

Once the largest retailer in the United States in the 1980s, Sears rated number 31 in retailing by 2018 with 223 stores open. The COVID-19 pandemic didn’t help with continued falling sales, causing additional stores to close in 2020 and bringing the total open stores to 29. A sad ending to an amazing legacy that began with the sale of some watches.

Members of the Museum can tour the Museum free of charge, while non-members pay a $5 entrance fee. Membership in the Museum is $15 for seniors, $25 for adults, $10 for students and $45 for family.