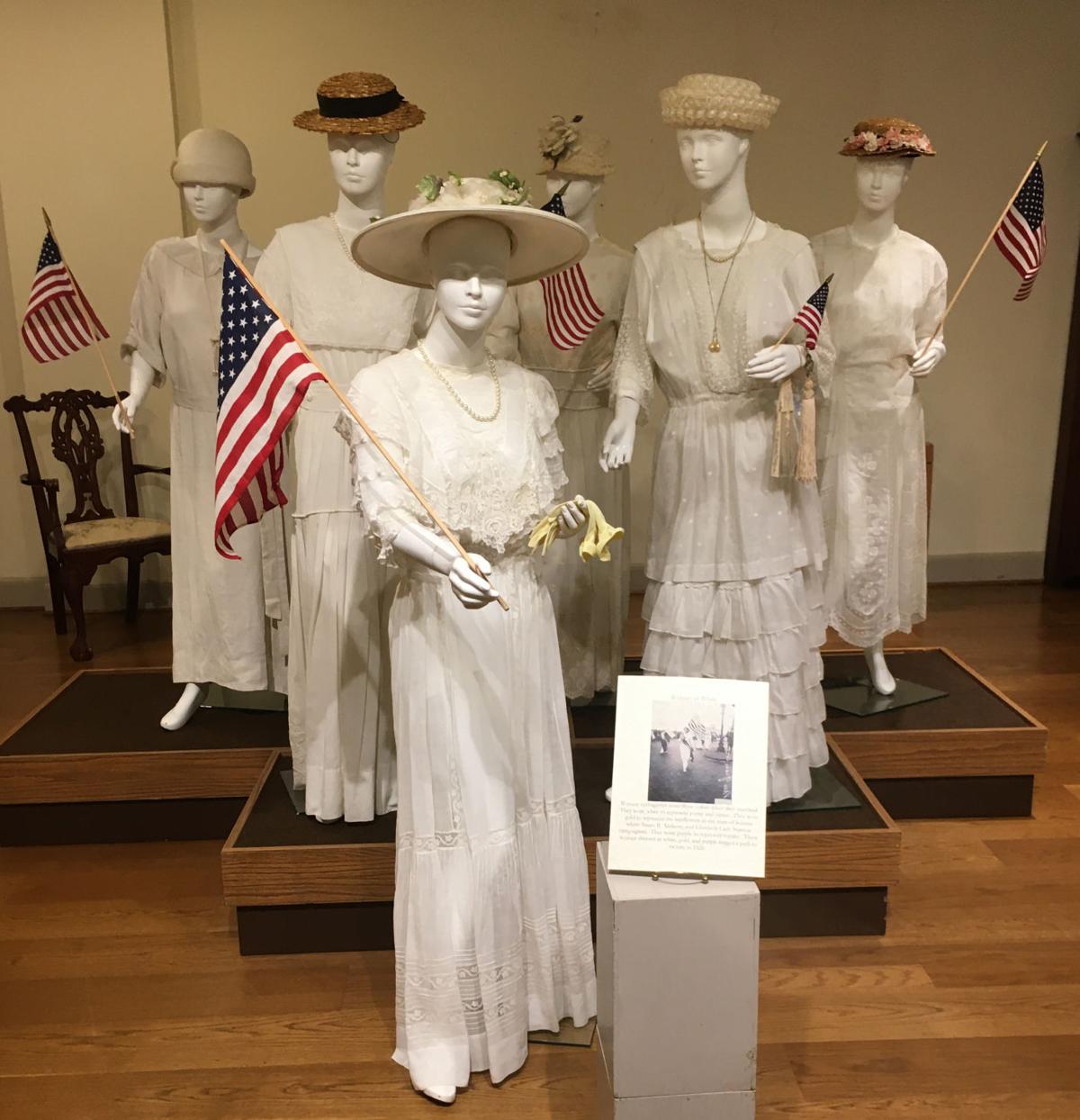 Shown here are a group of mannequins on display at the McMinn County Living Heritage Museum that represent suffragettes in a new women’s suffrage exhibit. 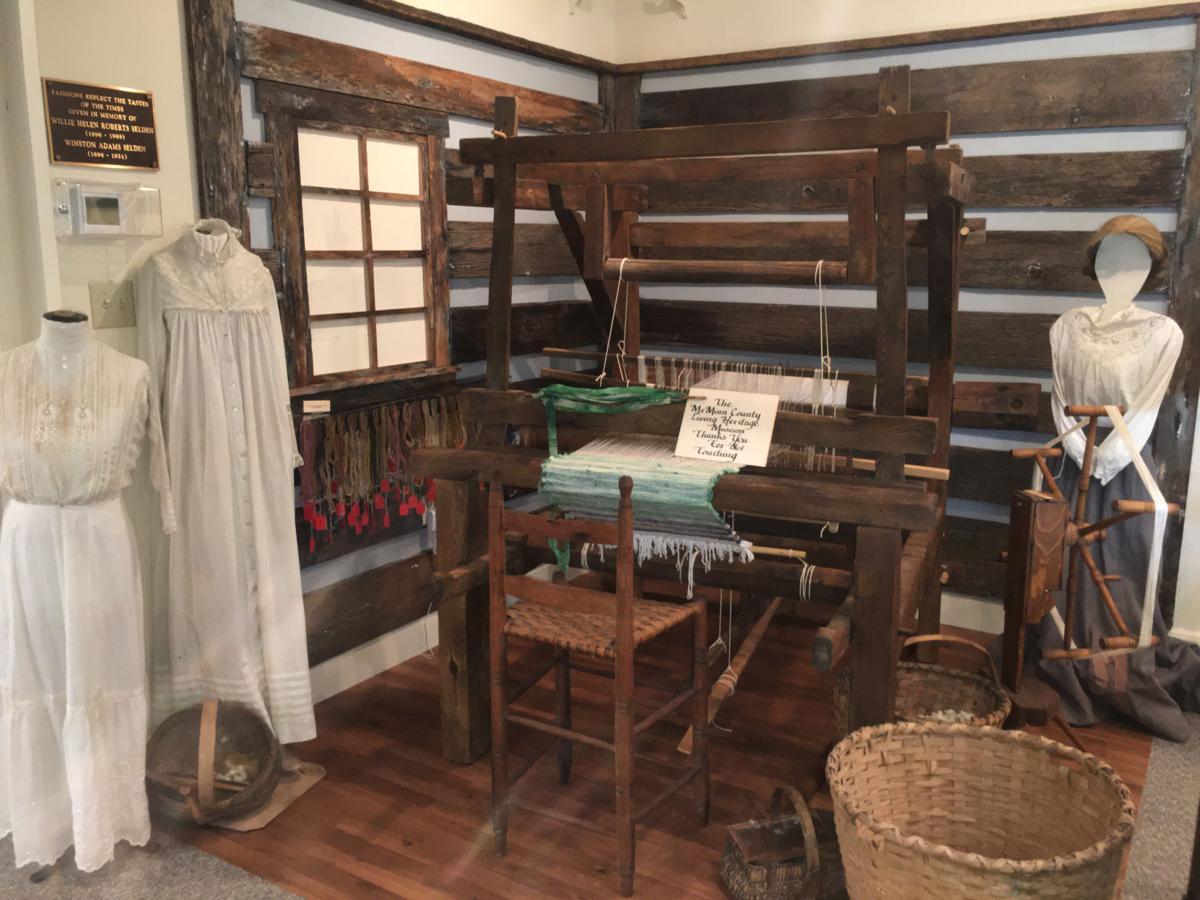 This loom on a cabin porch is part of a display at the McMinn County Living Heritage Museum.

Shown here are a group of mannequins on display at the McMinn County Living Heritage Museum that represent suffragettes in a new women’s suffrage exhibit.

This loom on a cabin porch is part of a display at the McMinn County Living Heritage Museum.

White dresses, a bright blue suit and flags of “Old Glory” stand out in a new display at the McMinn County Living Heritage Museum.

The group of mannequins represent women suffragists perhaps in a march supporting the women’s suffrage movement. One man is depicted in the exhibit and that is Tennessee State Rep. Harry T. Burn. His vote brought victory to an 80-year organized campaign in an effort to give women the right to vote. The 100-year anniversary of the ratification of the 19th amendment is rapidly approaching in August of this year.

Rep. Burn cast his “Aye” vote on Aug. 18, 1920, for ratification of the 19th Amendment to the U.S. Constitution allowing women across the country the right to vote. His vote added Tennessee to the other states making the much needed “perfect thirty-six” for ratification.

Burn, who was born and raised in Niota, was elected as McMinn County’s state representative in 1918 just prior to his 23rd birthday. He was the youngest member serving in the House of Representatives.

He decided to cast the vote for suffrage after reading a letter from his mother, Febb Ensminger Burn.

In that letter she urged him to vote for suffrage: “Dear Son … Hurrah and vote for Suffrage and don’t keep them in doubt …”

The “Woman Suffrage Timeline” found at www.crusadeforthevote.org begins in 1840 when Lucretia Mott and Elizabeth Cady Stanton were barred from attending the World Anti-Slavery Convention in London. They organized and held the first Women’s Rights Convention in Seneca Falls, New York, in 1848. From that point on, women’s activism continued, only stopping during the Civil War from 1861-1865 while women concentrated on war efforts.

At the turn of the 20th century, white — the chosen color of dress — stood out in a black and white world. Pictures of a parade of suffragists wearing white on the front page of a newspaper caught the eye of everyone that passed by the newsstand. It was also a more accessible color that everyone from every economic place of society could wear.

Eventually, the colors white, purple and golden yellow were adopted as the official suffrage campaign colors. Each color had a meaning: White for purity and virtue, golden yellow for the sunflowers of Kansas, and purple for loyalty. The exception was the women in London who were also in a similar campaign and chose to trade the color green in place of purple to signify hope.

The white dress is termed “suffragette white” in an article that gives the history of women dressing in white over the course of a century found at www.crfashion

book.com entitled, “The History of Women Wearing Suffragette White,” by Sophie Shaw. In that article, Shaw talks about how women continue to choose to wear white in support of those who had paved the way for their success.

In 1968, New York Rep. Shirley Chisholm wore white when she was the first African-American woman elected to congress. In 1984, Democratic vice presidential nominee Geraldine Ferraro wore a white suit for her acceptance speech. In 2016, Hillary Clinton wore white when she accepted the Democratic nomination for president in 2016. Most recently, Democratic women wore white to the State of the Union address in 2019 in order to stand out among the Republican representatives.

A timeline wall containing McMinn County history along with upgrades of lighting and signage throughout the Museum were made possible from a grant through the Lyndhurst Foundation. Contributors to the project are Bill Akins, Joe Guy, Sally Ealy, Laura Spann and the McMinn County Historical Society. The timeline takes up a sizable wall and begins with Hernando DeSoto in 1540 and ends with desegregation in 1965, which closed segregated schools and integrated remaining schools within the county. DeSoto is thought to have passed through land now part of McMinn County while crossing the Hiwassee River in search of gold.

Along this timeline of over 400 years, special events and artifacts from certain periods of history are noted in information blocks that stand out against a sepia background. Visitors can read an abbreviated account of memorable people and events that took place in and around the area of McMinn County.

Included in the upgraded display is a loom on the front porch of the cabin enhancing our textile exhibit. Signage takes you through the process of harvesting cotton, wool and flax and using necessary tools to create fabric. Other upgrades include an addition of a permanent Civil War encampment display and lighting within cabinet displays throughout.

Members can tour the Museum free of admission at any time it is open, while non-members pay a $5 fee. Senior adults and students pay a $3 entrance fee.

Living history is here to share through our stories. You may join our Facebook page and become better acquainted with our artifacts or visit our website at www.livingheritage

museum.com for more information about us.