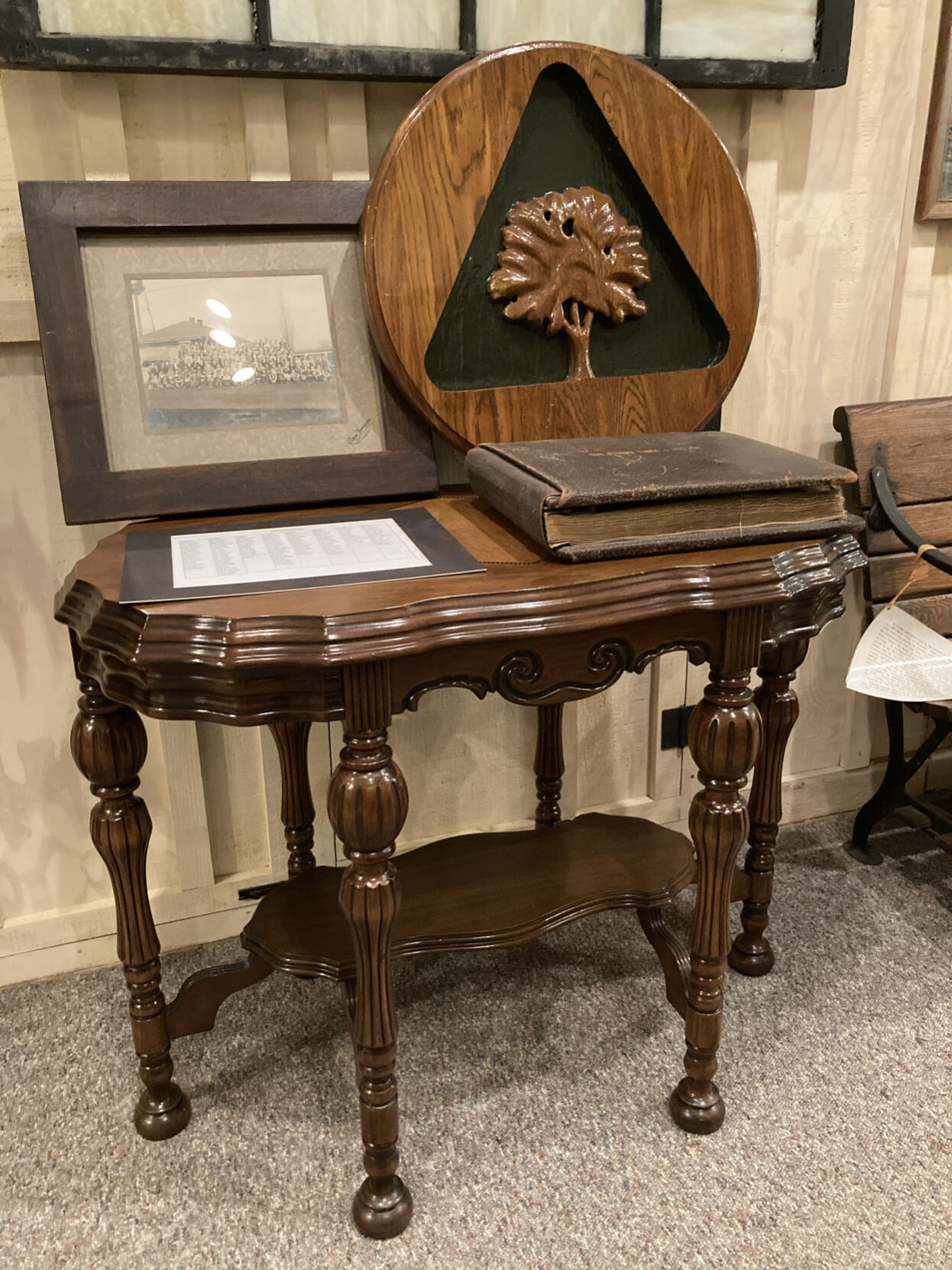 Show here is a table made by Athens Furniture Company, Inc., circa 1920, which is on display at the McMinn County Living Heritage Museum. 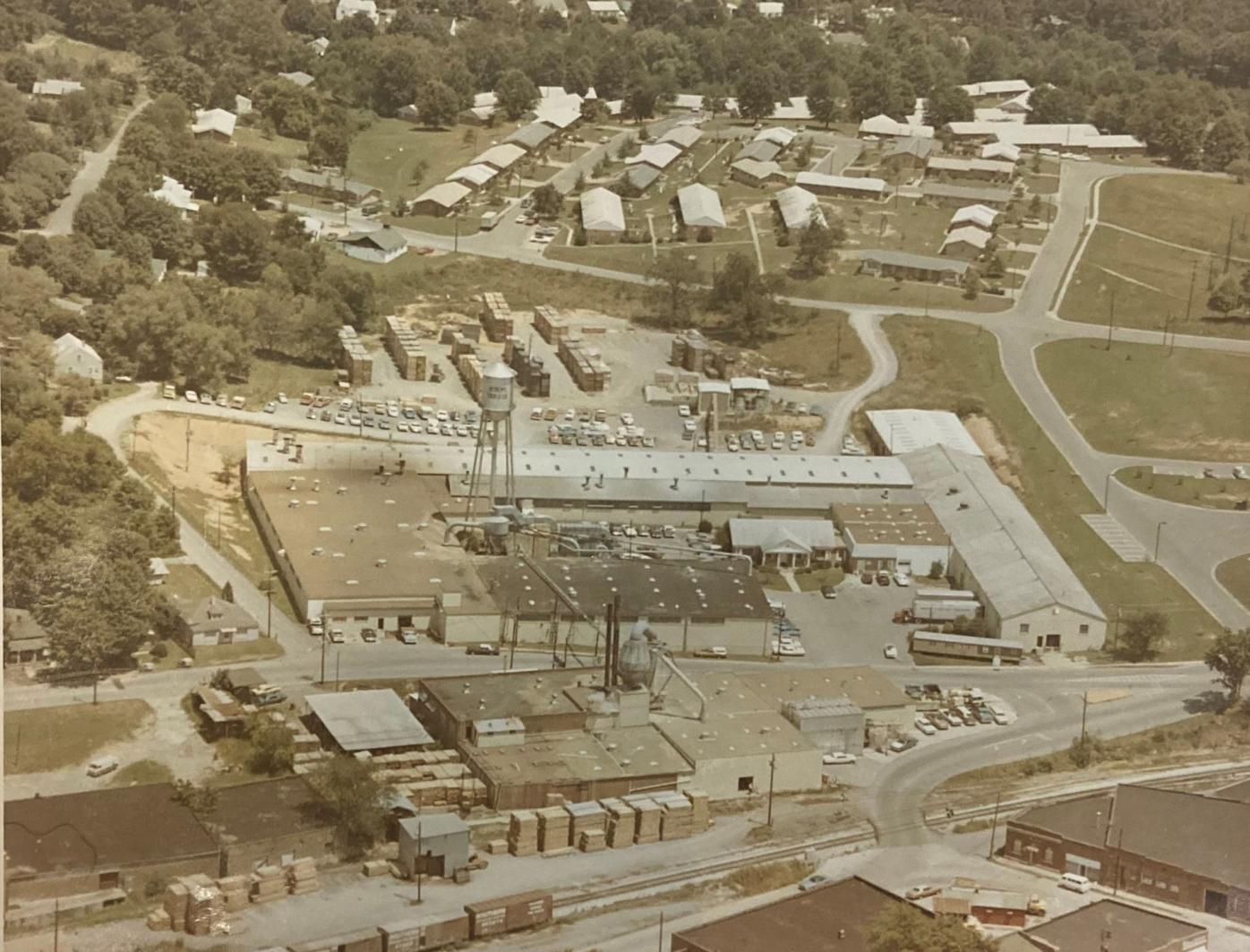 Shown here is an aerial photo of the former Athens Furniture Company, Inc., complex while it was still in operation.

Show here is a table made by Athens Furniture Company, Inc., circa 1920, which is on display at the McMinn County Living Heritage Museum.

Shown here is an aerial photo of the former Athens Furniture Company, Inc., complex while it was still in operation.

A wooden table made in 1920, an old ledger, a photograph of former employees and the wooden logo of the Athens Furniture Company, Inc., aka Athens Table Company, is part of the McMinn County Living Heritage Museum. Catalogs of the furniture made throughout the years and other artifacts rest in our library, as well.

The table matches the description of the line of “Occasional Tables” manufactured at the plant. The top is a marquetry inlay of walnut and mahogany wood. The company used hardwoods and mixed the woods to create artistic and geometric designs in this table — a blend of Victorian and Empire styles with the light and dark finish.

The table is outlined by scrolling and has six turned legs supporting a lower shelf. Many other types of tables and furniture made from different woods and in different styles were also produced at the plant. A signature piece was the Tea Cart.

The ledger shows several accounts the company maintained at a specific period in its 96 years as a company. Former employees posed for a group photograph in 1928 displaying the unity and pride in the company.

The logo is one of a large heavy round oak medallion with a triangular cut out painted green and a carved tree in the center. The logo could be found hanging within the company and was also found on the side of its transport trailers.

The company began with one man, Arthur W. Prather (b. 1866, d. 1944), who was a progressive businessman and inventor, according to one obituary found in the Nashville Banner newspaper.

Patsy Duckworth talks about him in her book entitled, “North Athens, The Jewel in the Crown.” It is available for reading at the E.G. Fisher Public Library in Athens.

Prather started many businesses. One in particular ended up growing with the county: the Athens Table & Manufacturing Company. He started the company in 1905, but did not run it for very long. By 1908, we find the company is owned and managed by J.L. Emerson, J.W. Bayless, H.E. Cartland and R.V. Weston. Prather had gone on to other business opportunities.

The Bayless team ran the company for many years until the Great Depression caused bankruptcy. In 1934, G.F. Lockmiller reorganized it into a stock-run company, with him being the largest stockholder. The name was changed to Athens Table Company, Inc., during the reorganization.

As the company moved forward, it saw more ownership changes and reorganization with its name change to the Athens Furniture Company, Inc.

The company expanded its table product to include bedroom sets by absorbing the Athens Bed Company. Desks were also included on the production line. Work was plentiful. A payroll ledger shows that many of the employees worked more than 50 hours per week.

The company grew to be known as one of the largest employers in Athens, producing and shipping furniture all over the country using its own trucks. Lumber purchased from out of state was delivered by the railroad to the company’s own side rail for processing.

Every year, a catalog was printed of furniture pieces that were made in Athens with corresponding product numbers. Ads in the local newspapers appeared frequently along with celebrations of years in business. The last one was a full page ad celebrating 75 years in 1980.

The Chattanooga Times Free Press reported in their May 23, 2001, article the sad news that the company had shut its doors and that the closing put 600 people out of work. The noises that came along with the manufacturing of furniture that residents close by had grown use to were now gone; a new quietness emerged.

A company called Chuck’s Cabinet Doors & Pulls is in part of the complex which runs along one side of North Jackson Street. The plant closest to the railroad tracks remained vacant for years until its recent purchase. North Athens residents may notice activity returning to the site while debris is removed and renovation of the structure takes place. A sign appears on the building advertising bricks for sale.

Members of the Museum can tour all of the exhibits free of charge, while non-members pay a $5 fee.

Senior adults and students pay an entrance fee of $3.

Please keep informed with our postings by visiting our Facebook page at McMinn County Living Heritage Museum or visit our website at www.livingherit