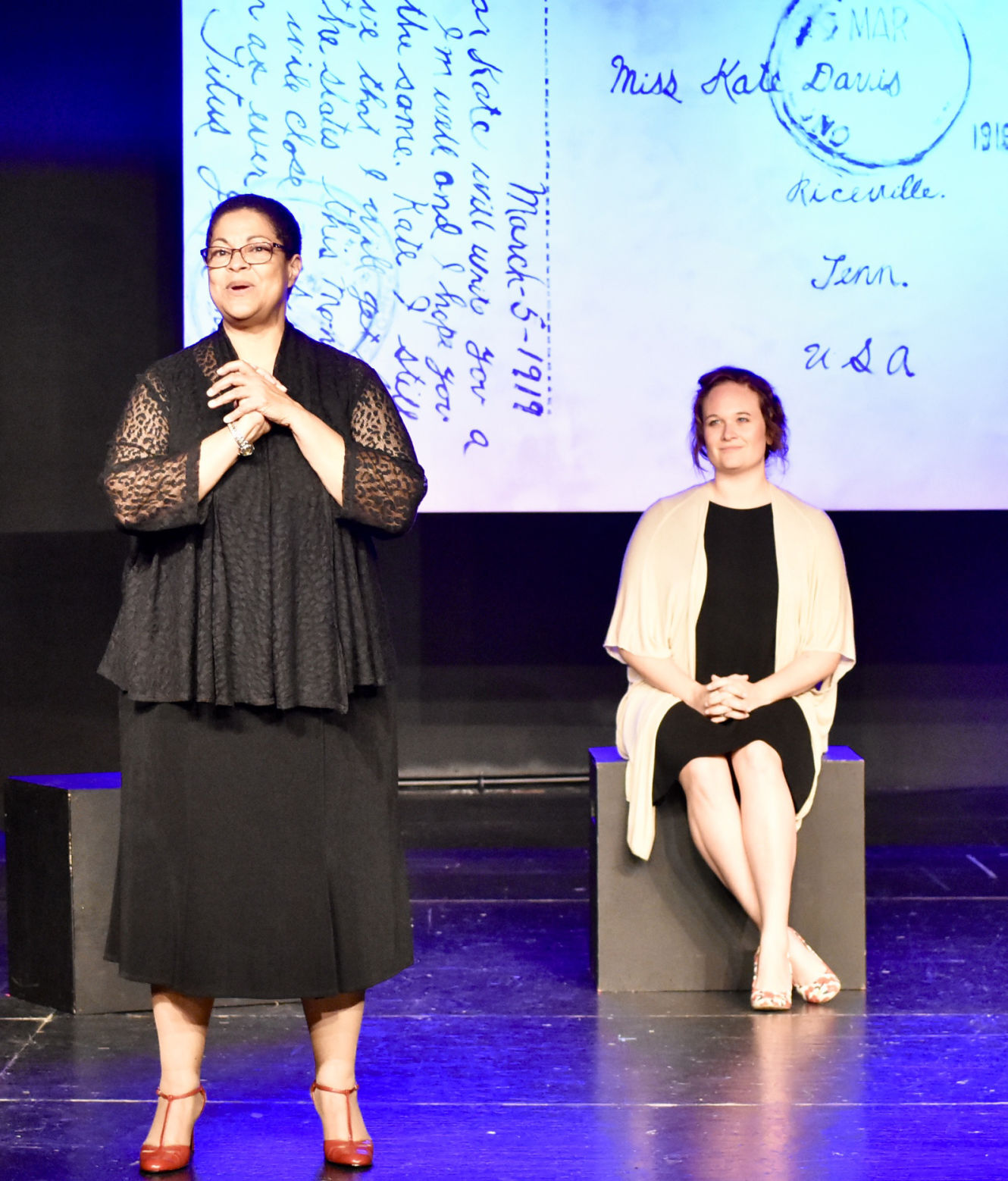 Shown here, Cynthia McCowan performs the penultimate piece of “Sincerely, Ours,” a letter to Ann Boyd from her sister, Claudia. A recording of Athens Community Theatre’s 2018 performance is available Sept. 11 — Oct. 11 online for subscribers at athensartscouncil.org/patreon 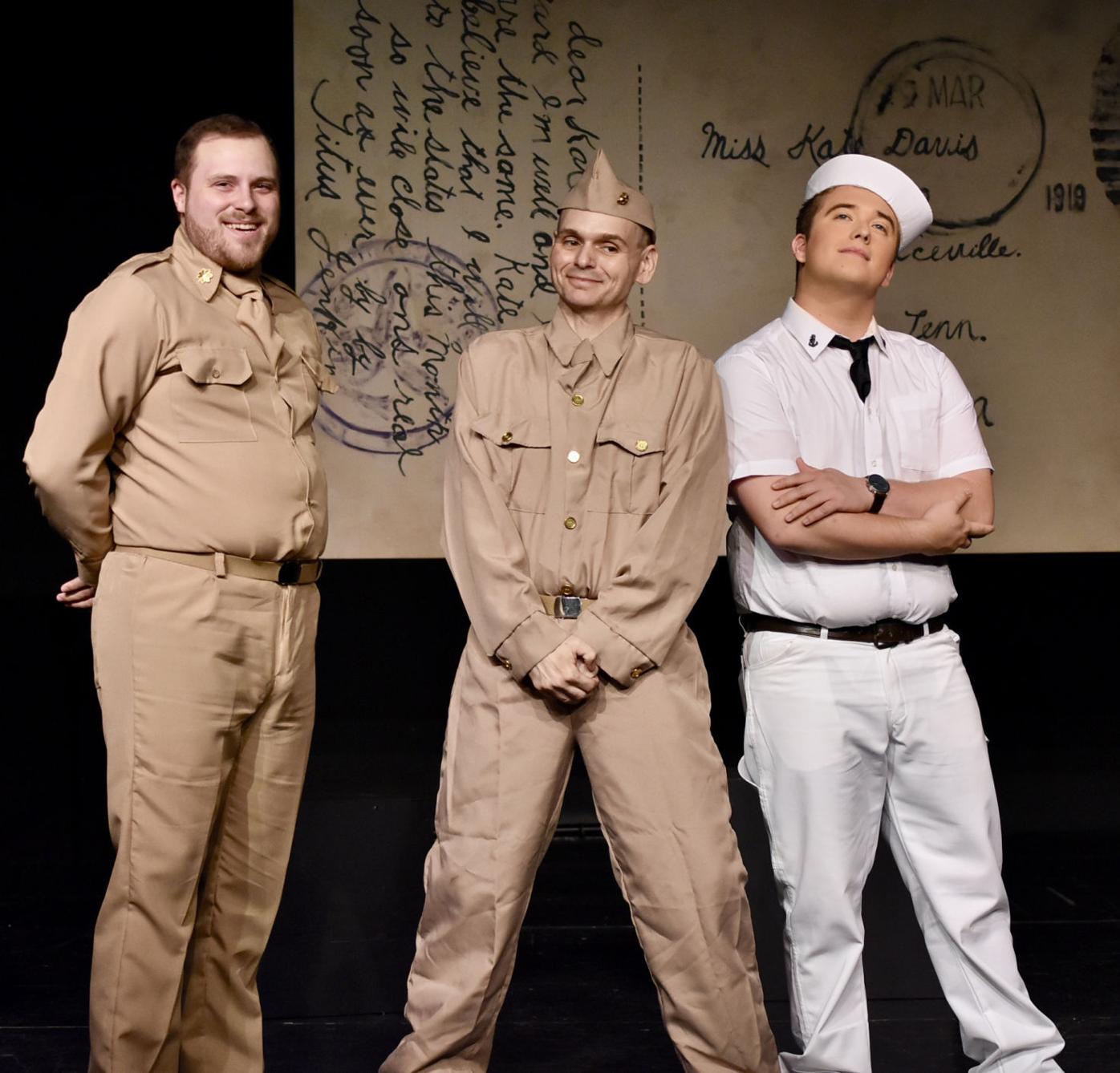 The Mahery boys (portrayed by Colby Pilkey, Jason Carusillo, and Trey Byrge) are some of the many veterans whose stories are told in their own words in ACT’s “Sincerely, Ours.” 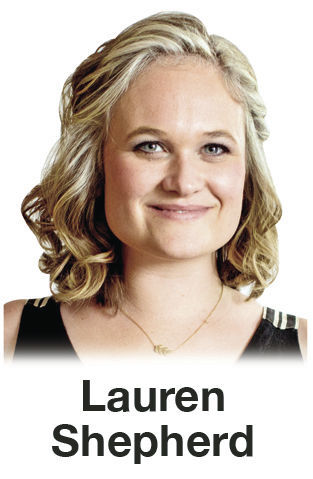 Shown here, Cynthia McCowan performs the penultimate piece of “Sincerely, Ours,” a letter to Ann Boyd from her sister, Claudia. A recording of Athens Community Theatre’s 2018 performance is available Sept. 11 — Oct. 11 online for subscribers at athensartscouncil.org/patreon

The Mahery boys (portrayed by Colby Pilkey, Jason Carusillo, and Trey Byrge) are some of the many veterans whose stories are told in their own words in ACT’s “Sincerely, Ours.”

I used to think my “dream role” was Cinderella from “Into the Woods.” I thought that, that is, until my mother asked me to play her mother in a 2018 original production, “Sincerely, Ours.”

“Sincerely, Ours” was a show conceived, compiled, and directed by Jan Burleson, which drew from the words recorded in letters, journals, and other personal narratives for nearly two centuries. What resulted was a compelling patchwork piece of theatre, stitching a collective narrative from disparate voices and diverse backgrounds.

The show begins and ends with original poems by local women. Following and preceding those poetic bookends are letters from Edward Goode to his son, Garland (1836-1837), and a 1990 letter to Ann Hitchcock Boyd from her sister, Claudia Hitchcock. The tales in between recount local historical milestones, take us through three wars, and offer a glimpse into the everyday lives of our predecessors.

Rosemary, my maternal grandmother, was among the show’s comic relief. She appeared first in Act One as a 16-year-old Vanderbilt student whose stream-of-conscious journal entries regale with sorority rush, meeting President Roosevelt, and purchasing loafers nearly in the same breath. In Act Two, my scene as Rosemary, the young woman writes to her mother letters full of measured heartache over her boyfriend’s reticence to propose marriage.

Two years ago, I was roughly the same age as my grandmother when she penned those letters 70 years ago. What a gift it was to an actor — and a granddaughter — to pour over those words and find Rosemary in my own self.

Participating in “Sincerely, Ours” is one of my most valued theatrical experiences; not only because I played my new dream role, but also because everyone who portrayed a family member or stranger understood the depth and significance of the work we were doing.

Theatre at its essence is storytelling and this story was purely ours.

The final poem in the show is mine, written in a rush of inspiration. My mother had been asking me to pen a poem and I had resisted; I most certainly wasn’t going to do it. But then, one morning pouring coffee, the words came.

“Palimpsest” is a poem that asks what happens to our stories when we don’t write them down.

I’ve been musing on this theme again. It began last night when I picked up an old favorite book. “Meadowlands” is a collection of poetry by Poet Laureate Louise Glück that reads more like a novel. The work interweaves the dissolution of a modern day marriage with the story of “The Odyssey.” I last read it closely in 2009 before my own failed marriage began.

I picked it up last night after my child feel asleep, slowly, with some trepidation. Running my fingers of the tattered cover, I smiled noticing it is in itself a sort of palimpsest.

I felt the indentions of a college-era arrow, likely from a note to a sorority sister penned hastily atop the book. And in another corner, numbers marked, perhaps a phone number, perhaps a math assignment. I opened it and began reading without chronology and went right to page 37, my favorite poem, “Circe’s Power.” I read the poem and then my own notes in the margin. Then I begin flipping for other pages with scribbled commentary.

Reading those reflections of my 23-year-old self was not all that unlike reading Rosemary’s letters. Like reading the innermost thoughts of someone you once knew, but not wholly.

Flipping through those pages and searching for traces of that young lover, I realized decades of margin notes might be the closest thing to a journal I’ll leave behind. I don’t keep a diary and I don’t write letters. I hardly have photo albums.

What traces of self will I leave for my granddaughter to piece together an understanding of who I was?

I mused on this thought all the way to a sobering question: What story will the vestiges of this election season and global pandemic tell?

Will our great-grandchildren be able to discern any humanity in our annals of this history?

I tried to imagine a future version of “Sincerely, Ours” and wondered what the 2020 source material might be. My stomach turned at the thought of someone on stage reciting a vitriolic Facebook message and I returned to my book.

I opened the collection to page 9, “Moonless Night,” a poem in which the speaker asserts: “Nothing/ is always the answer; the answer/ depends on the story.”

And to the side, the young reader queried: “What if the story’s always the same?”

I find myself this morning in prayer. If the story is indeed always the same, I pray that what we learn from this history we’re living is that, ultimately, we survived; we thrived because we showed one another kindness, mercy, and love.

Lauren Shepherd is the executive director of the Athens Area Council for the Arts. Learn more about AACA by calling 745-8781 or visiting athensartscouncil.org

Lauren Shepherd is the executive director of the Athens Area Council for the Arts. Learn more about AACA by calling 745-8781 or visiting athensartscouncil.org