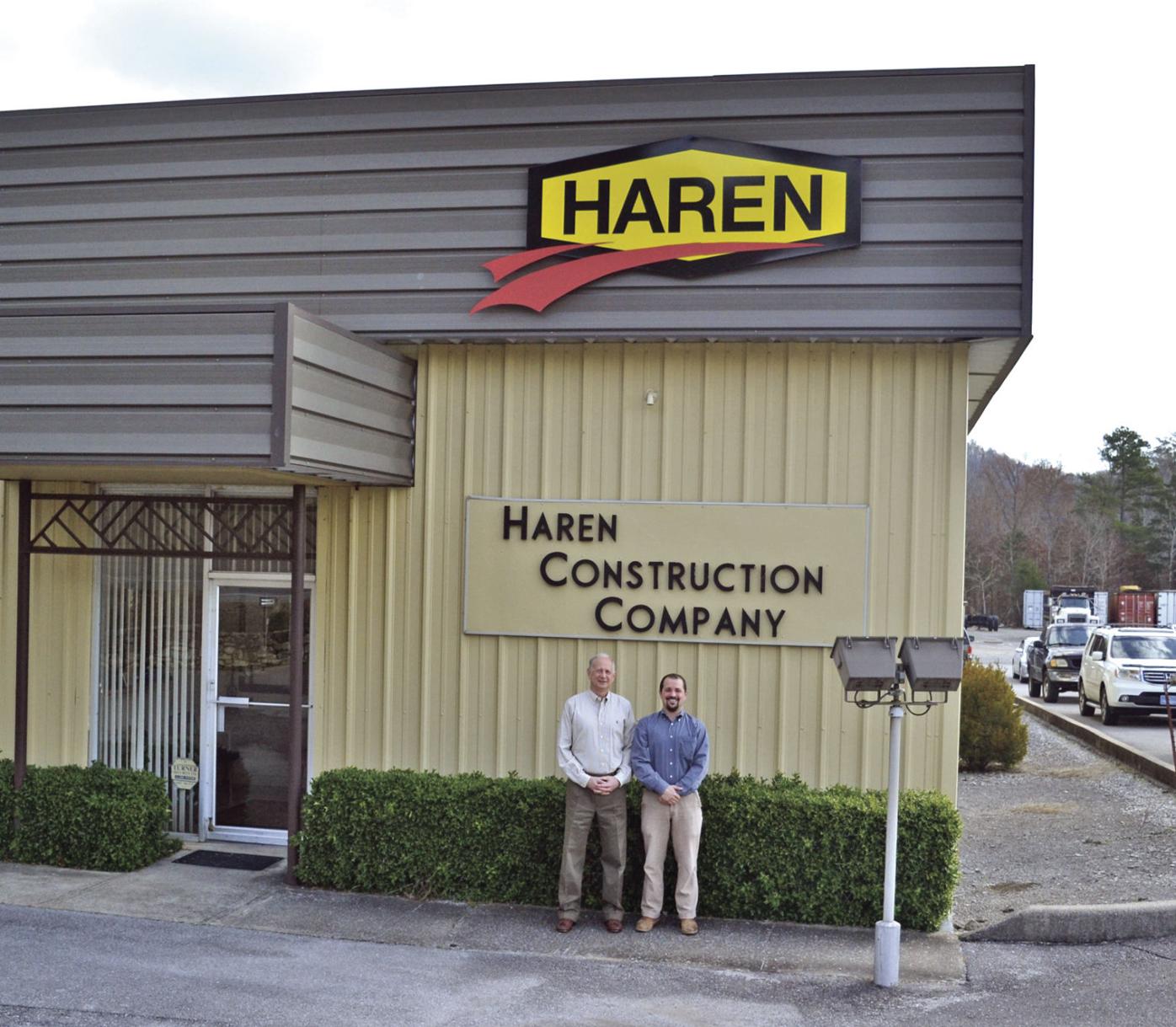 Photo by Dewey Morgan Evan (left) and Frank Haren stand in front of their construction company, Haren Construction. Evan's grandfather started the business in 1939 and his son, Frank, is in line to inherit it. 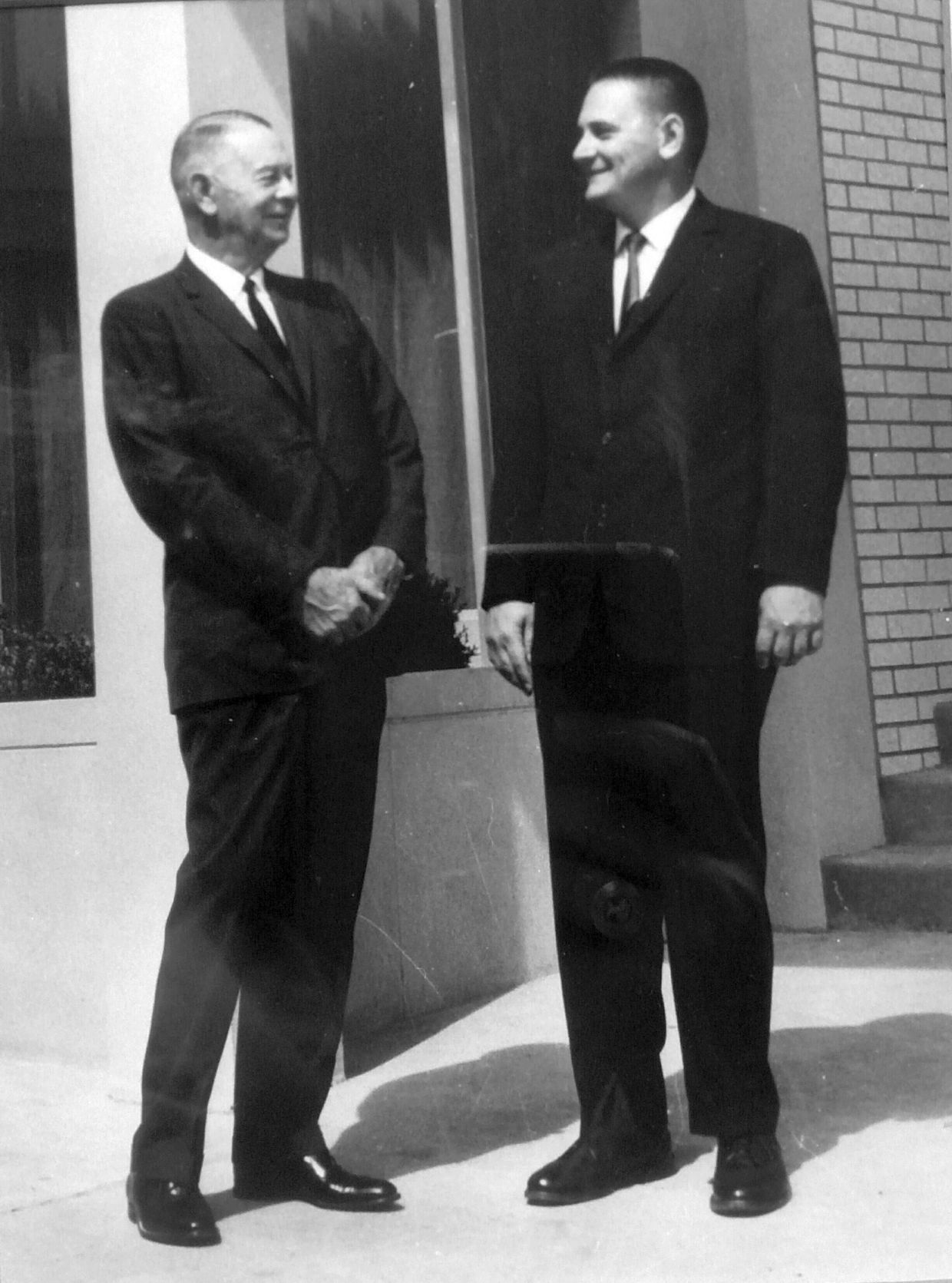 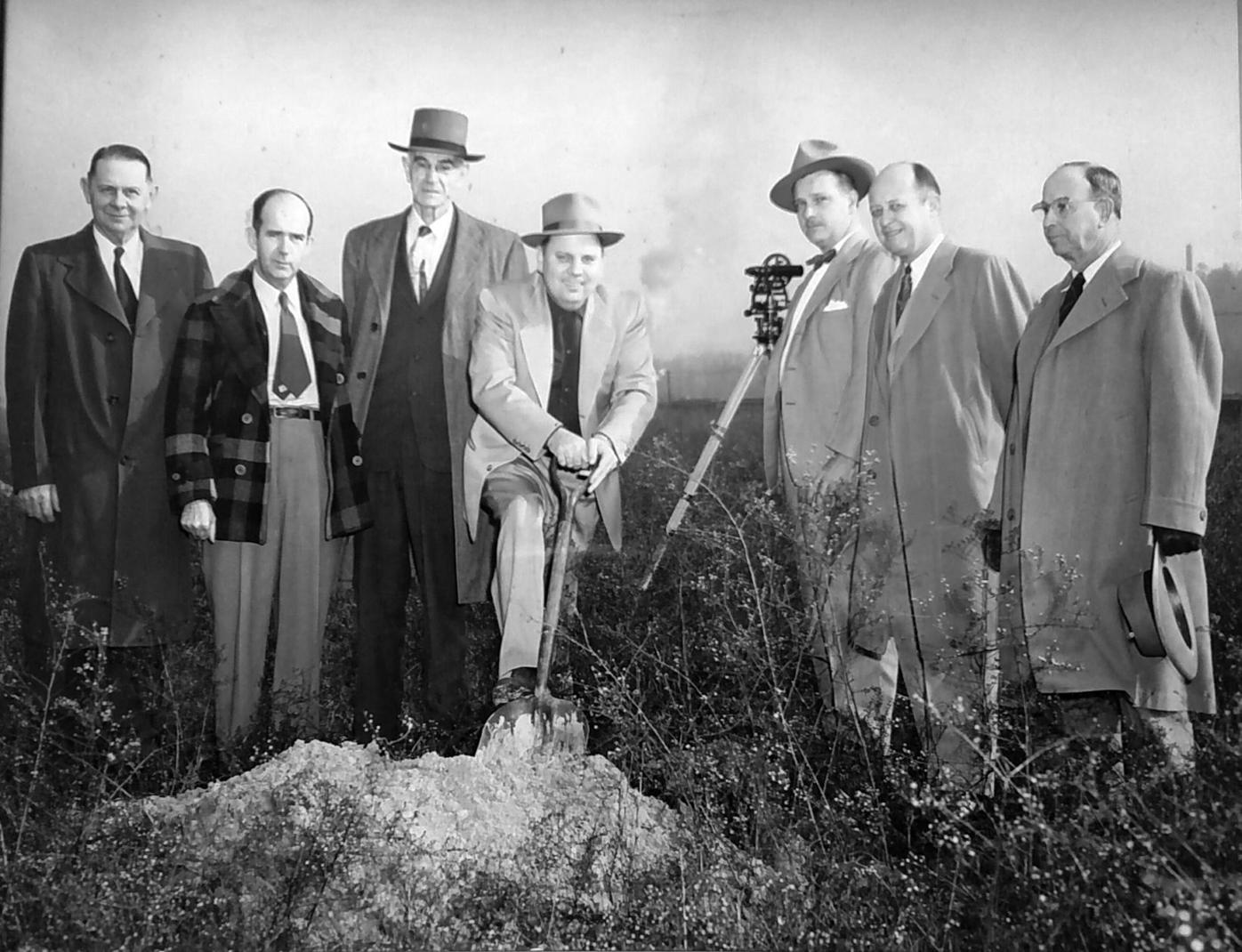 Photo special to The DPA Shown here is the groundbreaking for Blockson Manufacturing Company in Etowah in 1952. Among those in the photo is Ed Haren (far left), Evan Haren's great-grandfather. Others shown here are (from left) Bill Murphy, W.T. Upshaw, George Woods, Bill Bradley, Cecil Miller, and R.L. Sewell. 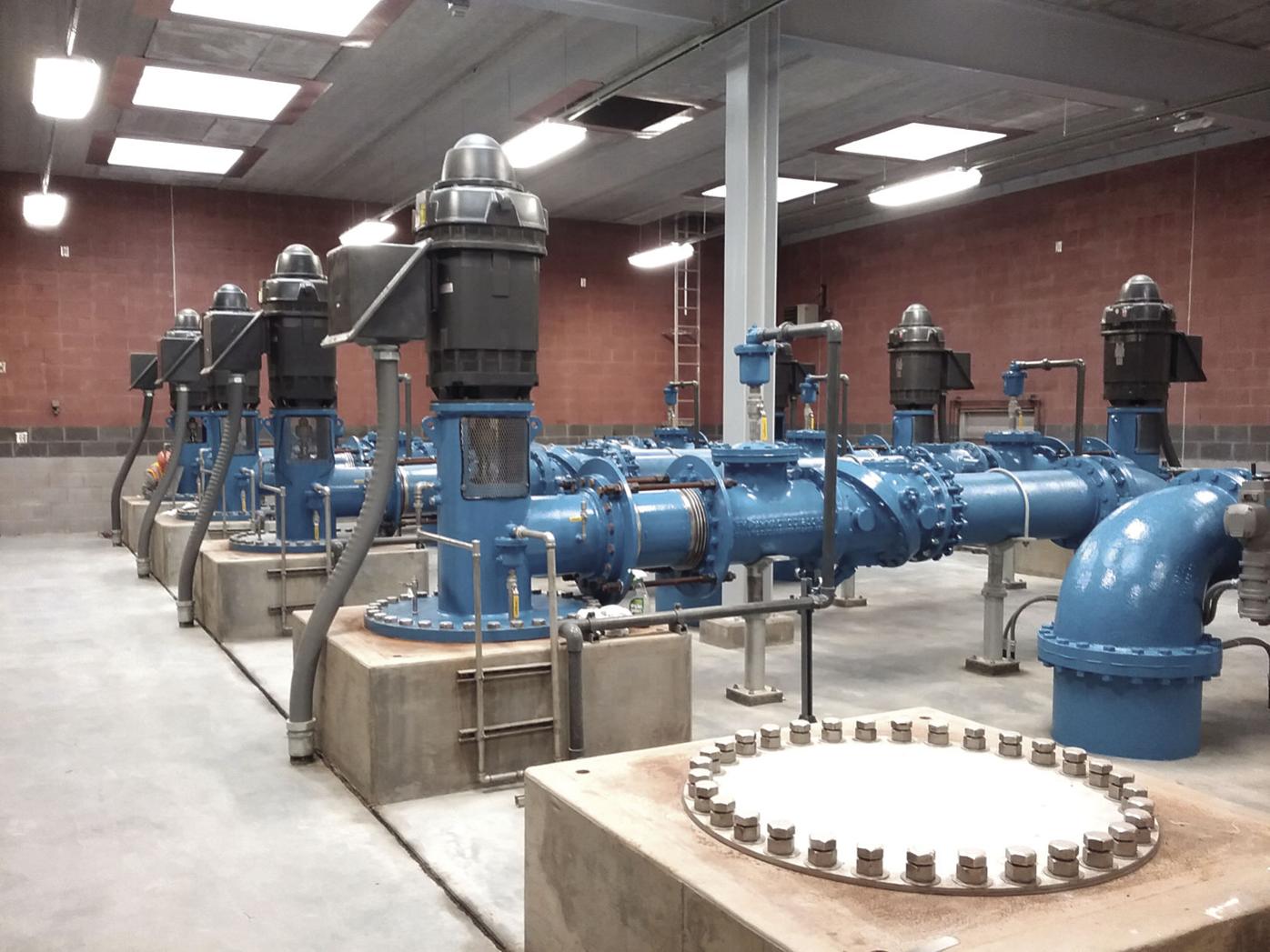 Photo by Dewey Morgan Evan (left) and Frank Haren stand in front of their construction company, Haren Construction. Evan's grandfather started the business in 1939 and his son, Frank, is in line to inherit it.

Photo special to The DPA Shown here is the groundbreaking for Blockson Manufacturing Company in Etowah in 1952. Among those in the photo is Ed Haren (far left), Evan Haren's great-grandfather. Others shown here are (from left) Bill Murphy, W.T. Upshaw, George Woods, Bill Bradley, Cecil Miller, and R.L. Sewell.

Nearing its 80th birthday, a local family business has seen four generations of family members work for the company.

Haren Construction in Etowah was started in 1939 by Ed Haren as Etowah Heating Company, and it was located in Downtown Etowah where Rotary Park now stands.

Ed Haren came to Etowah in the 1920s to work on the railroad, but he was a victim of mass layoffs and needed to start up a new career.

“To make a living, he started putting in heaters,” said Evan Haren, who currently helms the company started by his grandfather, Ed. “My father (Frank Haren, Sr.) grew up working in the business and learned the business right there.”

Initially, Etowah Heating Company installed HVAC units into buildings and worked on plumbing, but as it became more popular and began to grow, Ed and Frank Sr. decided to add water and wastewater construction to the list of what they offered.

A name change came between 1955 and 1960 as Etowah Heating Company became Haren Construction Company, and they eventually dropped everything but water and wastewater construction by the 1980s.

“He began to drift off to water and wastewater plants because he figured it was better business,” Evan Haren said of his father.

Evan was immersed in the business from a young age, as well.

“I grew up working summers and holidays,” he said. “We began to drop doing buildings and made this our expertise. It’s a good business – it’s very rewarding.”

Recently, the fourth generation of Harens has begun to work its way into the company.

Frank Haren, III, graduated from college in 2006, worked for a different construction com¬pany in Raleigh, N.C., for a few years and then came back to Etowah to join his father’s company just over three years ago.

“As I begin to slip out some, he’ll begin to take over,” Evan Haren said of Frank III. “He’s doing a good job.”

Thinking about running a construction company that has lasted nearly 80 years, both Harens were proud of their family’s accomplishments.

“It’s exciting and something I’m very proud of,” Evan said. “For any family business, it’s hard to go from generation to generation. The construction busi¬ness is so high risk and volatile, to have the staying power like we’ve had is very good, very rewarding.”

Frank III echoed many of his father’s sentiments.

“For me, it’s neat to see my great-grandfather and my grandfather’s pic¬tures on the wall and to think the way they did business and the way they treated people is the foundation this company was built on,” he said. “For me, it’s my job and my calling to come in here and do my job and then leave it for the next group interested in running it. I feel an emotional obligation to con¬tinue their legacy.”

“If it involves clean water getting dis¬tributed to people or dirty water getting sent back in to the plant and cleaned up before it goes back into the water supply, we are involved in that,” Frank III explained.

Evan noted that business for the company stretches to Wilmington, N.C., to the east and as far west as the Oklahoma line.

There are offices in Maryville and Dyersburg, as well, and the company employs 120 total people.

Those employees, they said, help to create the family atmosphere the company has fostered over the generations.

“There are people who come here and they haven’t left in 30 to 35 years,” Evan said. “The people are the impor-tant part of this business. When we find good people, we latch onto them and they like it here and they stay until they retire. It’s truly a big family here.”

The positions Evan and Frank III serve in are not jobs you clock out of or retire from, though.

“When you’re with a construction company, you have your hands over everything,” Evan said.

Evan noted that his father never truly retired from the job, and neither Evan nor Frank have plans of fully disengaging from the company, either.

“There’s a connection to the work that you feel obligated to give it your all – not just 8 a.m. to 5 p.m.,” Frank III said. “It’s hard to let go. There’s an emotional and passion-driven connection to it.”

There is a plan in place for Frank to begin to take more control of the operations, though.

“We’ve started a transition strategy where he’s let me and other young guys in on estimating and in on project management,” Frank III said. “He’s letting us start to lay the foundation to continue to grow the company for the next generation.”

Looking forward to that next generation, both said that there are a range of emotions that go on as you take over the family business.

“It’s very humbling, anxiety-inducing, and nerve-wracking to think that I’ve got to make sure for some 30-odd-years that we can keep the ship sailing,” Frank III said.

“You want to succeed,” Evan agreed. “You don’t want to be the one who didn’t succeed. That’s always been a pressure to me. I’m sure that’s the same thing Frank is feeling.”

However, there’s a lot of good that comes from carrying on the family business as well.

“We’re thankful and blessed to have the opportunity to continue the tradi¬tion of Haren Construction,” Frank III said.

“My dad was a good businessman, and he set up the system and principles and how to do business the way it should be done,” Evan added. “Those same principles are the ones we use today, and it works really well. That’s helped us be a construction company that has survived.”